Cary, NC — The Cary Town Council got together last Thursday to hold 5 public hearings and vote on 6 consent agenda items. Discussions of rezoning proposals and Public Speaks Out comments took up much of the 2 1/2 hour meeting. These are the highlights.

During the Town Manager report from Sean Stegall, he made the council and public aware that Cary’s prior Police Chief, Toni Dezomits has been promoted to Cary’s Public Safety Director.

“Toni is a real powerhouse and with her endless tenacity and commitment to Cary, I know she is going to do a great job in her new role,” said Cary Town Manager Sean Stegall.

With the help of consultants, the Town is starting up a national search process for Cary’s next chief of police. The search, according to Stegall will be “more important than ever since the pool of excellent candidates is shrinking nationally.” He hopes to have Cary’s next chief on board sometime in summer 2022. Until then, Stegall has appointed Interim Police Chief, Terry Sult. 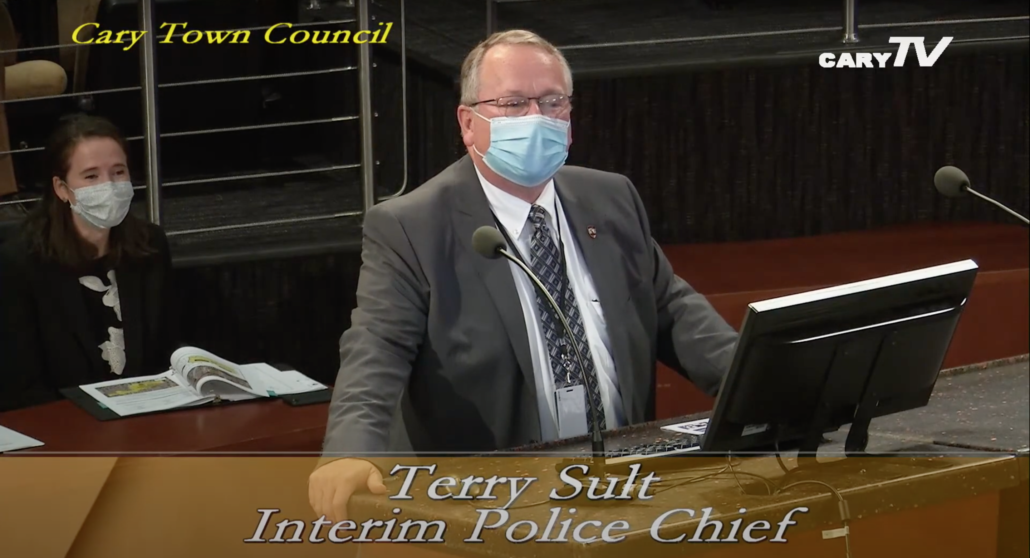 Sult has reached the rank of Captain in the Charlotte-Mecklenburg Police Department as well as other Police Departments in Gastonia, NC Sandy Springs, GA and more recently in Hampton, Virginia, where Sult recently retired as chief.

“I thought I was retired, but there was a need and frankly, I’m very dedicated to public service. So I’m looking very much forward to working with each of you,” said Sult who made an appearance at the council meeting. In speaking to the council, Sult also said, “We’re looking forward to good things and just kind of holding the fort, but also exploring things that we may want to do and help the new chief onboard with foundation blocks that may need to be considered going forward over the next several years.”

This past Thursday’s meeting had the widest range of topics seen in a long time at the Public Speaks Out portion of the meeting.

Starting things off were a few of the write-in speakers, one expressing her desire to keep the dogwood flower in Cary’s logo and sharing that the Hardee’s logo has the same yellow star as seen in the proposed new logo options for Cary. A second commenter shared her dislike of the blue and yellow in the logos and shared that she associates Cary with the color green. A third write-in speaker was upset about construction noise in her area in the morning.

As for in-person speakers, two spoke against the 21-REZ-07 request at Mills Road, citing issues with the plan’s connectivity and handling of stormwater runoff.

“I knocked on the doors of all 87 homes in The Woodlands and the signatures that you have represent 68 of those homes,” one speaker said, explaining that the main concerns of the neighborhood are a right-turn-only traffic pattern and traffic congestion associated with entry and exit points.

Another speaker came forward to speak about what he’s seen as a homeowner in Downtown Cary related to affordable housing and the destruction of single-family homes.

“My wife and I like living in Cary but we’re concerned that many of our neighbors are being driven out of the city. The cost of renting downtown has shot way up and one neighbor was hit with a 50% rent increase in August,” he said. “Last week a house that sold in 2018 for $270,000 with an updated bathroom, new floors and a new roof was nonetheless bulldozed.”

The speaker said he has worked with town staff to understand what initiatives from the 2020 affordable housing plan had come to fruition. When he would ask staff about specific items, the man said it “became clear that very little of it had actually been implemented.”

He went on to say he appreciated the council’s 4-3 approval of 15 affordable housing units in a July development proposal, but he said, “15 out of 285 units is a rate of about 5%, hardly adequate for the increasing demand for workforce housing and increasing jobs vacancies.”

Further, the man addressed a recent blog from Mayor Weinbrecht where he says he was disappointed to see Weinbrecht “ridicule the most recent speaker for pitching a ‘Wake One’ mantra and throwing money at a complex problem.”

He explained that the correct name of the organization is One Wake and in his own opinion, One Wake is “absolutely correct that plans are more likely to be implemented if they are included in the budget.”

“I want to talk a bit about the response to COVID. It’s time to end all the fear associated with the COVID virus,” started another speaker.

This speaker spoke his full 3 minutes at the podium about the virus and the problems it has created from business closings and job loss to suicides and domestic abuse.

“Early on, no one knew the path the virus would take, however now we have much more information. Yet some like CNN, Dr. Fauci and Governor Cooper’s office continue to push much of the same narratives we’ve heard for a long time which has proven to be no longer valid or perhaps never was,” the speaker said.

He claimed masks and lockdowns do not work and that vaccines have low efficacy rates.

“I believe we should follow the lead of Denmark, Norway, Sweden and many other countries which have all lifted their restrictions,” he said.

At the end of his comments, the speaker called on the council to “end the pointless mask mandate” and said, “We all just need to take a deep, maskless breath and get on with life.”

The last public speaker was Dan Pike, a 25-year resident of Cary and the President of the Board of the Cary Downtown Farmers Market. Pike explained how unfortunate it is to be in a time of much negativity and little expressions of appreciation.

“I’m here to tell you all thank you very much for all you’re doing for the citizens of Cary. I may not agree with all of your specific actions, but I appreciate you and respect you as a group and individually and I know that you always have our best interest at heart,” said Pike.

He applauded the efforts of the public works team that handles events in Cary, specifically for their recent help at the Farmers Fall Festival which saw over 5,000 visitors.

“This is an amazing group of Town employees that are a key contributor to each and every event that the Town of Cary holds. I wanted to recognize and publicly thank them for all their hard work and dedication to the citizens of Cary,” said Pike.

In response to these actions and to address the population variance test for all districts, redistricting is required before filing dates for the upcoming municipal election in March. So, at the meeting, Town Attorney Lis Glover explained the process and presented two map options.

A public hearing was held for the council to receive citizen comments on the two revised Council electoral district boundaries. There were no in-person or call-in speakers, though three submitted written comments before the meeting. Two people voiced a preference for map option 1 and a third 1uestioned the borders of the districts and liked the shape of District D when it had the natural border of NC-55.

The vote to approve one of the two districting maps for the upcoming election will take place at the November 9, 2021 council meeting. 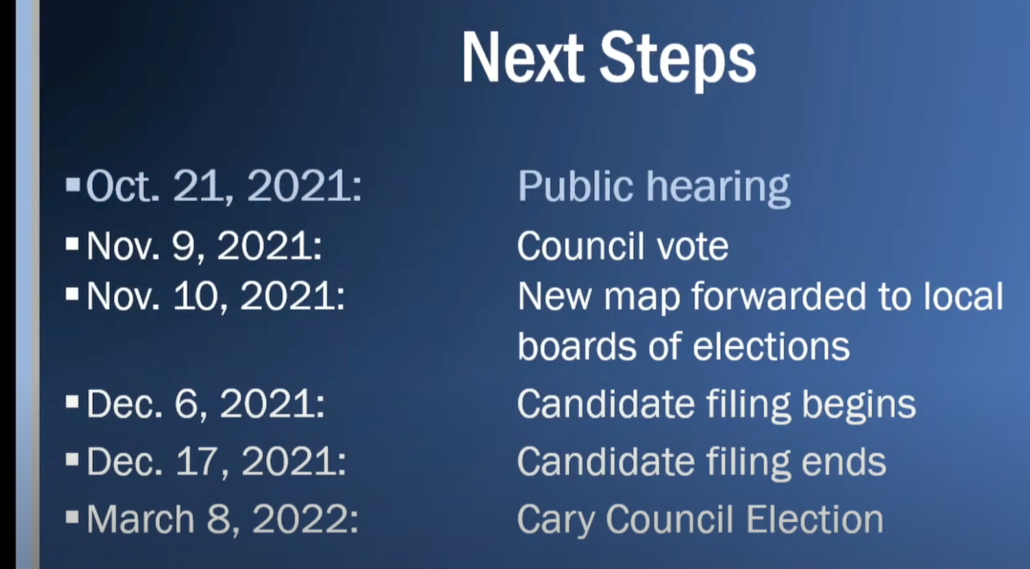 Most public hearing speakers for the night were there to speak their thoughts on one of the two rezonings being discussed, both of which have now been forwarded to Cary’s Planning and Zoning Board since the hearings.

The first up was a public hearing for a proposed amendment to what’s known as Parcel K, a piece of the Carpenter Village development on land that is currently vacant and undeveloped. The land covers 5.91 acres at the intersection of Louis Stephens Drive and Morrisville Parkway, across from Carpenter Elementary School.

The applicant, West Cary Properties LLC, requests to rezone the property by amending the Parcel K portion of the planned development district to allow, in place of previously approved retail, for the development of up to 50,000 square feet of office uses with a maximum building height of 50 feet.

Most speakers who came forward voiced their concerns about the building height and that the intensity of the project would not be compatible with other nearby uses.

“This is not an area for commercial buildings, this is our neighborhood,” said one speaker. Another said, “It would be the first office building in that area and we should not set that precedent.”

For further details on this proposed rezoning, see the development page.

The Kilmayne Place rezoning was also the subject of a public hearing with a few speakers. This rezoning request is to change the use of 3.24 acres located at 128 SW Maynard Road from “General Commercial Conditional Use” to “Mixed District.”

Along with the applicant, nearby homeowners spoke in the public hearing, most expressing concern about the look of the intended development including building height, light impacts and what could potentially go in its place if it were not approved as is. One requested that the tree canopy be preserved as much as is possible along the edge of the site. Further, some voiced concern about the noise and traffic impacts that may come with construction in this location.

Following the public hearing, the council discussed the rezoning proposal. Mayor Pro-Tem Don Frantz said he’d like to see conditions be put in place with the proposal to ensure the development would live up to promise such as architecture being very special with elements like a residential roof. Councilwoman Lori Bush expressed concern over parking that abuts Rose Street Park and that she would like to see affordable housing units be included as a condition in the plan.

Councilwoman Jennifer Robinson spoke to a 10-foot buffer being quite thin given the adjacent uses, which could pose a challenge for her to approve it later on with how narrow it is. Other council members joined in the notion that more robust conditions would be favorable. This will move to the P&Z board next before returning for a council vote in the future.

The Mills rezoning proposal (21-REZ-07) was pulled from the consent agenda at council member Ya Liu’s request. As she explained, neighboring residents to the proposed development have expressed concerns, some of which spoke about connectivity and stormwater runoff in the Public Speaks Out portion of the meeting.

During the discussion, council members and staff pointed out that these sorts of concerns get addressed during the site plan review later in the process. Connectivity will not be determined until a site plan is submitted and stormwater runoff will need to meet the criteria of a 100-year storm.

The larger annexation request of note from the meeting was the 21-A-01 Apollo USA, LLC Annexation. This request is for 29.5 acres spread across 5 parcels west of NC-55 and north of Howard Road. This request is also associated with a development plan currently still under review to bring townhouses to the area.

No members of the public or council members had comments on the proposed annexation at the time of the public hearing. As planner Debra Grannan stated, this will come back for a deciding vote at a later meeting date once a few street and dwelling issues are brought up to Cary standards.

Another annexation, titled “21-A-13 Dold”, applies to three currently vacant properties and would allow the properties to be connected to Cary utilities. This annexation received no comments at its public hearing and was approved by the council in a unanimous vote.

For more information on these items that were approved with one vote, see the documents on the Action Agenda.

The next council meeting is scheduled for Tuesday, November 9, 2021, at 6:30 PM in the Town Hall Chambers.

Story by Ashley Kairis. Photos and image screen captured from the live meeting video on the Town of Cary YouTube Channel.