Cary, NC — In a work session of the Cary Town Council on Thursday, September 9, options for a new Cary logo and tagline were shown and discussed.

With no consensus made, there was not a vote to adopt any of the logo options, but Cary may have its new tagline — “Live Inspired.” 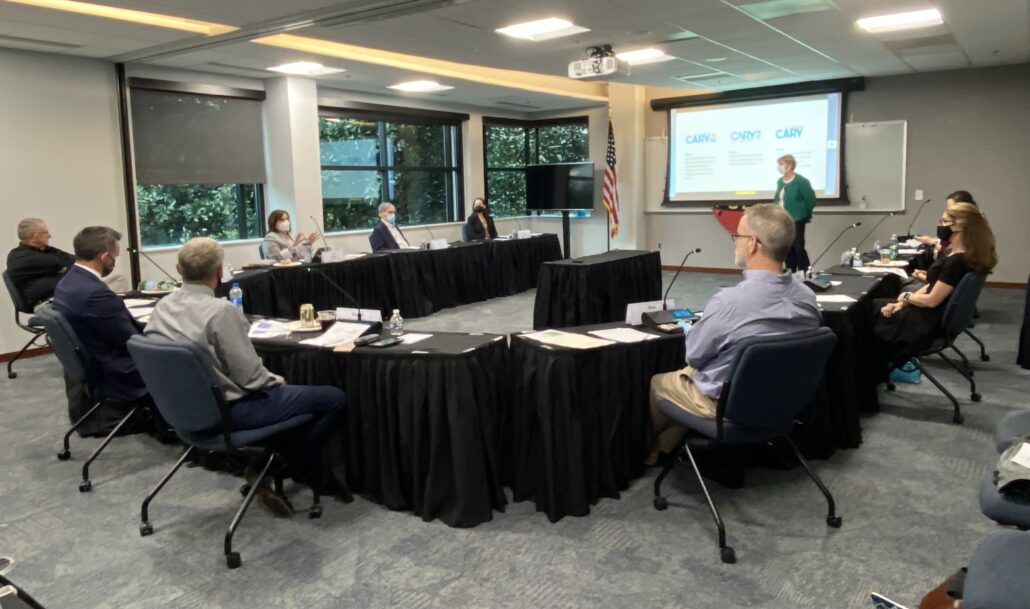 Cary Town Council members met inside the Cary Police Department training room, during which, not all members opted to comply with Cary’s state of emergency/mask mandate.

Cary’s Chief Strategy Officer, Susan Moran presented the materials, summing up the 4-year process of research and content development. As she explained, the driving force behind the branding effort has always been to “give our community a leg up.”

As Cary’s Town Manager, Sean Stegall put it, this rebranding has been long overdue and it has now reached the final stage before implementation. That is, pending the majority approval of the council.

A Mixed Bag of Reactions

Some preliminary logo options were shown to the council before showing the more polished, top 3 choices for their consideration.

From focus groups and online surveys, some of the words that people described Cary as were: innovative, high-end living, high earners, well-run, desirable and diverse. These were focal points for the logo design teams to try to visually represent.

Just after unveiling the top 3 options, some of the first few first impressions from the council were on the contrary, with descriptors like, “basic, uninspired, elementary and disappointing.”

A slide from the presentation shows the top three options and describes what each represents.

“From Nothing to Something”

As both Stegall and Moran explained to the council, these options are to freshen up Cary and stop the use of its current logo and seal which Stegall says have been doing the community a disservice.

Moran also said, “This isn’t the logo of the century or the tagline of the century. This is an effort to move from nothing to something.”

One of the companies the Town’s worked with, French West Vaughn, put together a mock-up with a logo chosen at random to give the council an idea of the look and feel of it on government vehicles, advertisements, in magazines, etc. 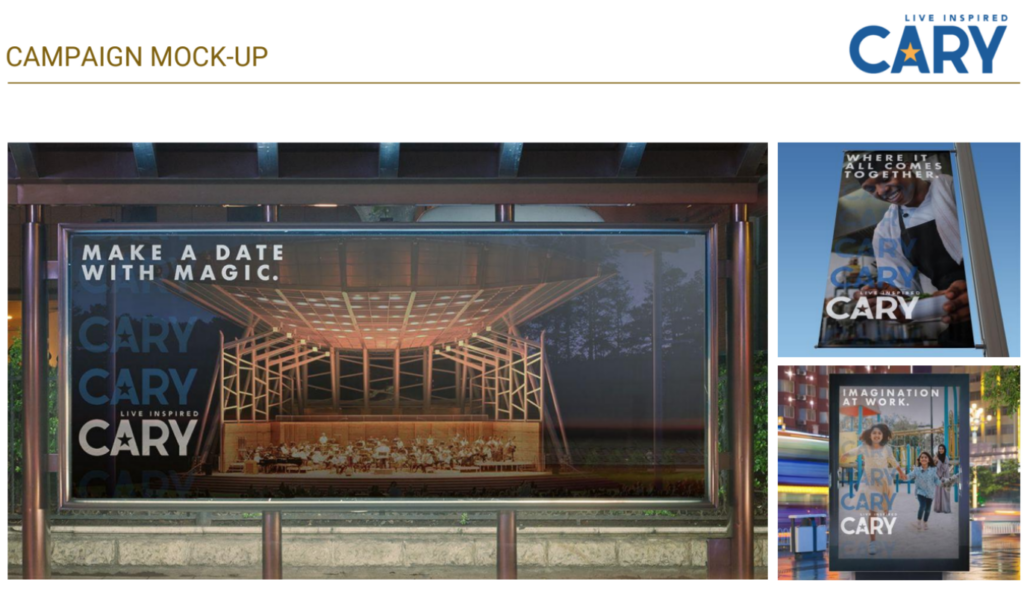 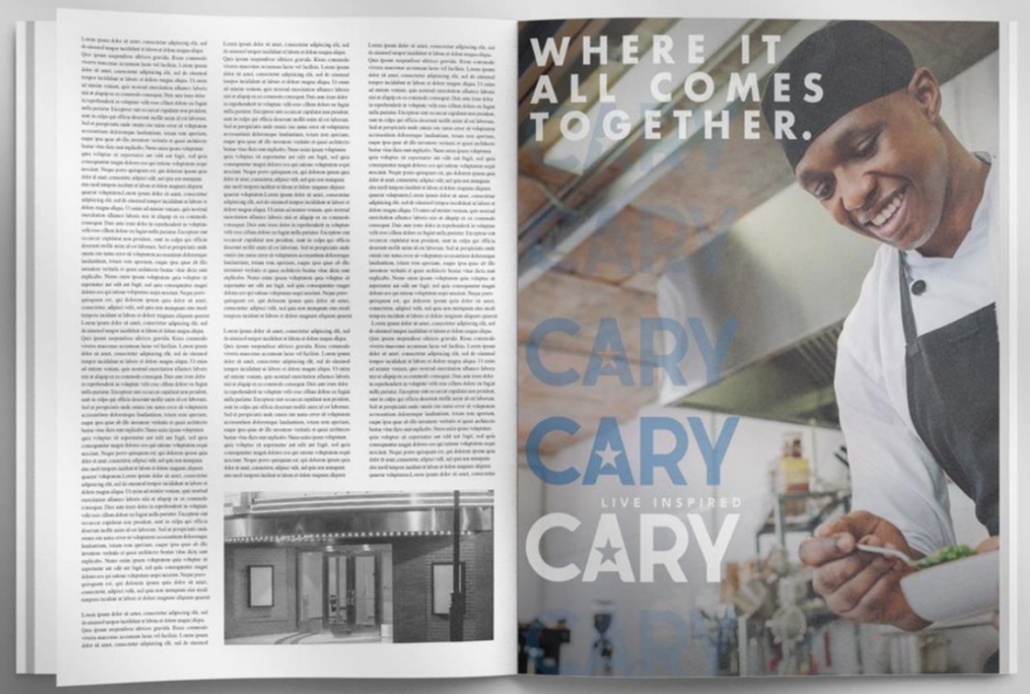 Starting off the conversation of opinions was Councilmember Lori Bush who was honest in saying, “I don’t like any of them.”

While she didn’t mind the tagline, “live inspired,” she said the logo itself felt uninspiring and she felt the team could do better in creating something more representational of Cary.

Councilmember Ya Liu said she too liked the tagline, “Live Inspired,” but would like to see a bit more creativity with the design. Ed Yerha sided with Bush, saying he too didn’t really like any of them initially. He described the options as okay, clean and fresh.

“I’m okay, but I’m disappointed. After all the time we’ve spent on this and all the effort that we took on this, I would have liked to have had something that was unique in here,” said Yerha. “I don’t see this having a parallel to Cary.”

He mentioned the example of Apex’s logo with the synergy of the name with the design and tagline “The Peak of Good Living.” Bush also mentioned positives from nearby logos such as Morrisville and Raleigh with the imagery of a tree for the City of Oaks.

“I don’t agree with your points, I really don’t,” Mayor Pro-Tem Don Frantz said to Bush.

Speaking to the options presented for Cary’s logo, he said, “For me, I think it’s fine. I think it looks good on the cars and the imagery in the magazine and other places. I think it’s clean, it’s neat, it can be used in all kinds of ways.” 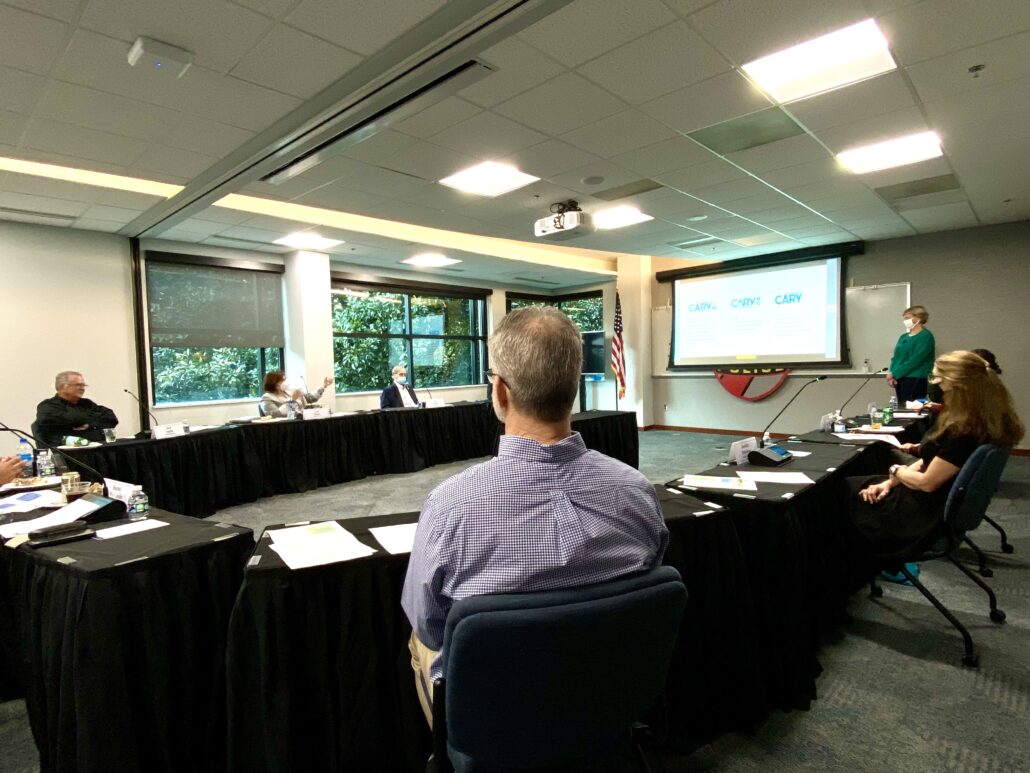 Councilmember Bush’s also explained she has what she called an underlying problem with the logo.

“The yellow star, to me, screams to my heritage to where I have seen yellow stars. So, I don’t like that. I’m not saying you should avoid yellow starts at all costs, but that is what I bring to this conversation as a granddaughter of a holocaust survivor and victim.”

Most were sensitive and receptive to this feedback, some suggesting a change of the color, others speaking more to the meaning that the star might have, one is for a capital city like Raleigh.

After noting Lori’s point, Stegall did mention that in testing ideas with citizens and various groups, many people and Americans, in general, love stars. It tends to be a safe, less controversial choice with many positive connotations and that’s why it moved to this final round.

Councilmember Jack Smith was one of the last to speak. The way he saw it, the council is at a point to either “give up and go with things as is” or “make a decision that doesn’t have to be permanent forever.”

On the gold star conversation, Smith said culturally and with how children are now being raised, “people find a reason to be hurt and offended.” He said,  “Sometimes we just have to look at what is the intent and what is our feeling that it relates to most of the community.”

He continued, “I’ve had two people perish at Dachau so, I know. My family was part of that persecution that was over there. Never, ever after 60-some years did I now tie this yellow star, but I understand it can be personal to some folks. But, if we start thinking about what’s personal for every person in the country, we’d go out of our minds.”

In closing the topic, Mayor Harold Weinbrecht noted the logo has been a long time coming and he wants to see the council be fully ready for this decision as it is an important one. Himself, Smith and Robinson have seen the logos the most through the process as part of a subcommittee.

“We’ll take these three and suggest others be presented and we’ll bring it back and discuss it at that scope since we don’t have a unanimous agreement. Maybe we can get closer with a bigger scope,” said Weinbrecht.

Stegall also noted before the work session closed that it was a big accomplishment to seem to have a full agreement on the tagline, which tends to be the hardest part.

“To keep Cary great, we have to think really, really big. Think bigger than North Carolina, think nationally at trade shows, and really being competitive well into the future,” said Stegall.

“In order to do that, we need Fortune 500-level quality marketing pieces.”

Speaking to the reactions and how the logo will resonate with citizens, Stegall said the message is that Cary is a special place and a place where you can live inspired. He worries that if the process leans in a way that is too artistic the logo will start to speak to something that is not the citizens’ experience.

The process will continue on in the next work session, which is currently scheduled for September 23, 2021.

According to Stegall, once there is an approved logo, there won’t be a long timeframe between the adoption and the Town staff really going forward with a big, comprehensive marketing campaign.

Story and photos by Ashley Kairis. Logo renderings courtesy of the Town of Cary.