Cary, NC — Monday was Labor Day, so my activities started on Tuesday.

Tuesday I contacted council members to hear of questions or concerns about the upcoming agenda. Most of the comments were about the proposed rezoning for a dentist’s office in Wellington.

Later Tuesday I met with Mayor Pro-Tem Frantz, management, and staff to go over the agenda items. We discussed information that needed to be in the presentations for the Wellington and Towerview rezoning proposals. Our meeting lasted about thirty minutes.

My final meeting Tuesday was to sign municipal bonds that were part of the Cary Community Bonds passed in 2019. The official bonds and other documents required signatures from the Mayor, Town Manager, and Town Attorney. The process took less than 15 minutes.

Wednesday I participated in a podcast interview for “Cary On”. It was the first of a series of interviews about what is going on in Cary.

We talked about the Eastern Gateway and the Fenton, downtown, and other areas of interest. The interview lasted about thirty minutes.

Cary Gets $17.32 Million in Federal Funds

The allocation was based on population, HUD monies, and several other factors. The more urban the municipality, the more money allocated. ARPA funding is different from CARES (Coronavirus Aid, Relief, and Economic Security) funding in that it is more for a long term, one-time need whereas CARES was for short term and immediate needs.

Council passed the motion to receive the funds. Staff will present recommendations to council at a future meeting. All funds must be spent by December 31, 2026. Some of the allowed uses include:

In the financial report, it was also stated that Cary has now sold $125 million of the $225 million in bonds approved in the 2019 referendum. One of the top three bond rating agencies, Moody’s, said, “If there was a rating higher than AAA then Cary would get it.”

Needless to say, our finances are in a great position. Interest rates are also great. With our bond rating, the money for the downtown park was at an interest rate of 1.45% instead of the projected 4%.

Staff reported that the Black Creek Greenway Sewer Rahab Project is on schedule. To get the latest updates go to https://carygreenway.com.

In the branding update, the council was presented several logos and the tagline “Live Inspired.” One of our main purposes for embarking on this branding campaign was to help with Cary’s effort to recruit international business. The council unanimously agreed to accept the tagline of “live inspired.”

Many logos were previously vetted by staff, the Economic Development Committee, and a subcommittee of the Information Services Advisory Board. Being that logos are like art, it will be difficult to get everyone in agreement on a logo. The output from those groups was three logos that were presented. The council decided to review an additional set of logos at our next work session.

The work session concluded after about an hour and a half.

The first regularly scheduled council meeting of the month had four consent items, one public hearing, and three discussion items.

The town manager’s report at the beginning of the meeting included an update on COVID infections within town staff. He also reported that Cary citizens have a vaccination rate of 68% instead of 80% as previously reported. This mistake was due to an error by the state and county.

Under discussion, Council unanimously approved a transfer of funds for the Cary Tennis Park Phase II lighting and bleacher improvements project. This was leftover money from the Penny Road Park project. Council also approved the Towerview Court rezoning near James Jackson and Cary Parkway. The dissenting vote stated that it was too dense.

The Wellington Park rezoning had received a lot of comments over the last few weeks. I expected a divided vote on this proposal. Surprisingly, the council voted to unanimously deny it. Council members stated that they believed the current use, a daycare, would be better for the neighborhood and that it was possible build a daycare on the site even though it is less than an acre. The fact that it has been for sale for about a year was also a factor. The council meeting concluded after about two and a half hours.

Please feel free to reach out to Leo directly if you have specific questions at ljohn@nclm.org  or 919-522-5138.  NCLM is working on a guidance document, which we will share.

The meeting lasted about 40 minutes. 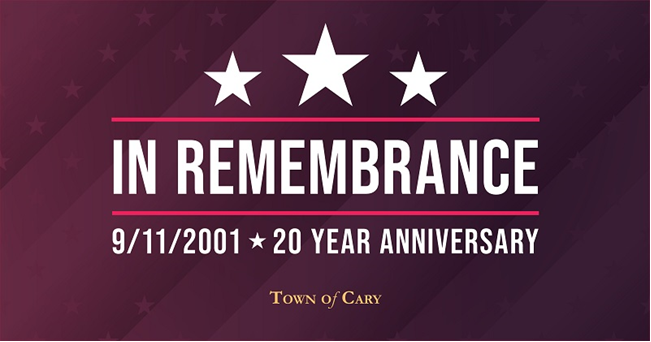 How is it possible that tomorrow will mark 20 years? In some ways, it seems like yesterday.
On 9/11/01, I was leading one of my earliest Department Director meetings when the first plane hit the Twin Towers.

An aide to the police chief came running into the conference room and told us to turn on the TV. Very quickly the budget discussion took a back seat to trying to comprehend what we were watching together.

As the hours passed and the horror compounded, I’ll never forget the impact on our Fire Chief as he scrambled to figure out how he could help while the rest of us focused on ensuring their wasn’t an imminent attack on Chicago or, by proxy, Elgin, IL. Those fears were cemented with the sounds of F-16s being scrambled overhead from the nearby Great Lakes naval station.

In the days that followed, my mood – and those of so many others – was best described as an even greater appreciation for firefighters in particular. Ever since that day, when asked about the cost of fire departments given the low incidence of fires, I have often remarked that we pay firefighters not for what they do, but, rather, for what they are willing to do.

As each of us thinks back to and projects forward from 9/11, please join me in gratitude for all who were and are willing to offer the greatest sacrifice so that the rest of us may enjoy our tomorrows. 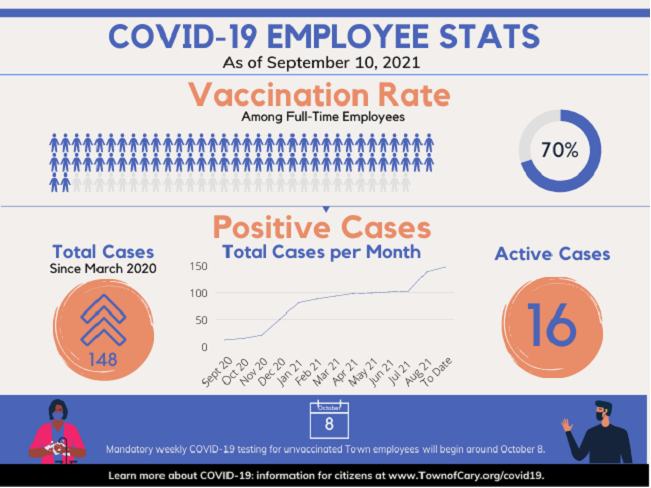 The first two water meters were installed this week by our construction crews for Phase I of Fenton.

These meters are part of Cary’s Aquastar Meter Program which provides high quality, accurate, and reliable metering services that are comprehensive, sustainable, and provide exceptional data.

The annual “Schools In, Speeds Out” campaign conducted by the Police Department concluded on Friday, September 3. The campaign began on Monday, August 23 and ran for the first two weeks of classes for the traditional calendar schools in Cary.

During the campaign, the Traffic Safety Team (TST) was joined by members of the Patrol Division to monitor various school zones with the goal of educating drivers to prevent speeding and other dangerous actions in school zones.

Officers were able to dedicate their time to monitor 22 school zones, conduct 142 traffic stops, and issued 42 citations for various violations including speeding in a school zone, illegal passing, red light violations, and careless and reckless driving. 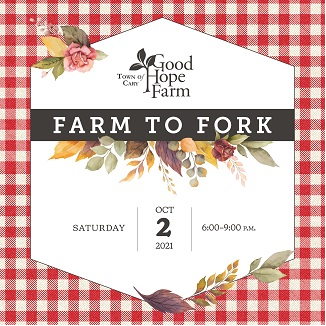 Tickets are on sale now for the annual Farm to Fork dinner and celebration at Good Hope Farm. Held in collaboration with our non-profit partners, this fundraiser event invites our community to enjoy an evening of dining and dancing down on the farm under the stars!

This “high-class hoedown” event ticket includes a farm fresh gourmet meal, locally brewed beer and cider, entertainment by a surprise musical guest, and a signature gift. All profits from this event go to support the work of Good Hope Farm in creating food security and agriculture education in the region. Event information and ticket sales can be found here. 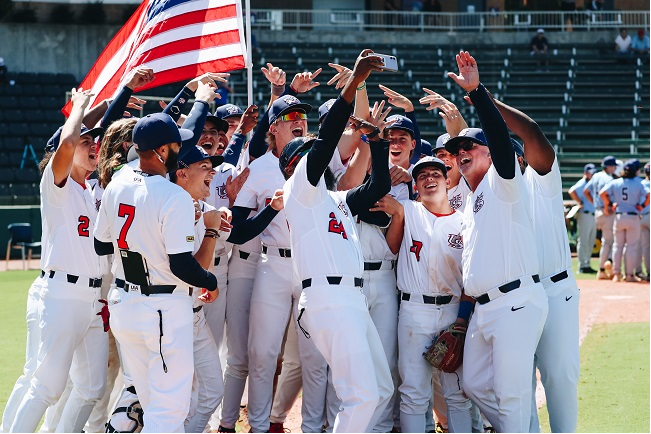 USA Baseball wrapped up their 15th season (June-Labor Day) at the National Training Complex. The season consisted of 14 USA Baseball events, highlighted by the first Major League Draft Combine and the USA Baseball Olympic Team training prior to heading to Tokyo, leading to a Silver Medal.

Town staff are now preparing for the fall season, which consists of town recreational league play and weekend college showcases, which offers a local and regional presence at the venue.

In January 2020, Cary completed a Curb Ramp Inventory as part its ADA Transition Plan. At that time, there were 500 miles of Cary-maintained streets with 6,610 curb ramps. Prior to completing the Curb Ramp Inventory, Cary proactively repaired nearly 800 curb ramps as part of its annual Street Improvements Program .

Curb ramp assessments are included in the annual pavement condition survey and are repaired or replaced, if needed, in advance of street resurfacing. Since January 2020, we have added 513 ADA compliant curb ramps to our inventory.

Of those, 162 were brought into compliance through Capital Improvement Projects and 351 were added through association with new development projects. For more on ADA Improvement projects click here. 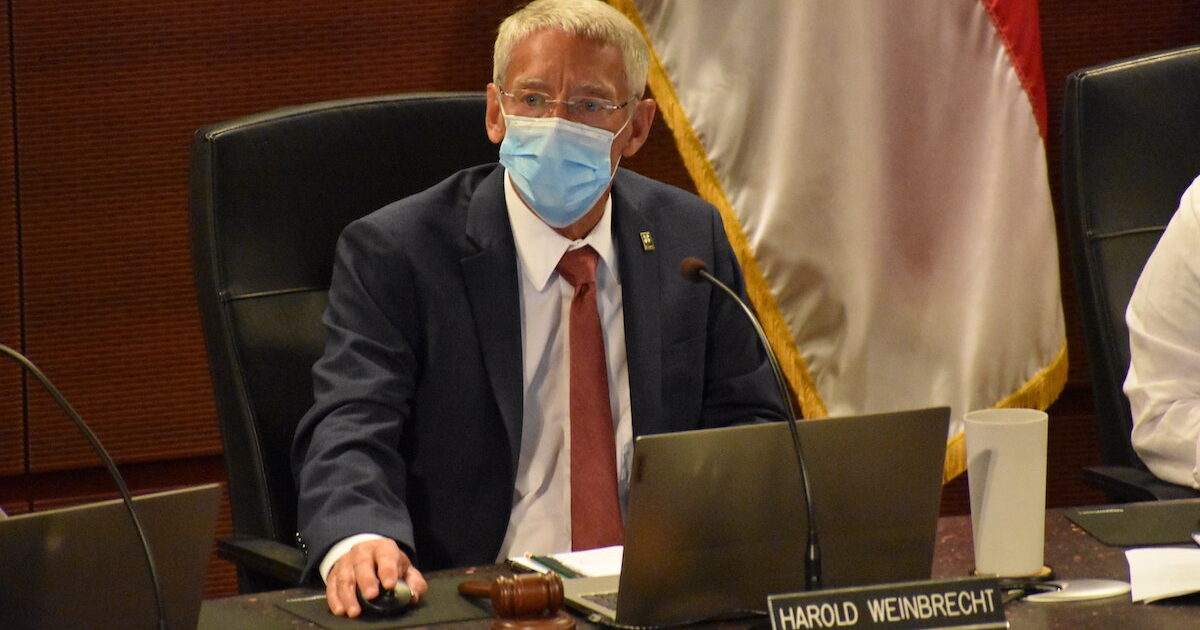 Well, that is all for this week. My next post will be on Sunday, September 19th.  Although I have Facebook and Twitter accounts those are not the best means of communications with me. Please send all Town of Cary questions or comments to Harold.Weinbrecht@townofcary.org and email personal comments to augustanat@mindspring.com.

From the blog of Cary Mayor Harold Weinbrecht. Images from Town of Cary & Ashley Kairis.