Cary, NC — This week included the last council meeting of the month.

A Monday Full of Meetings

Later in the day, I met with Mayor Pro-Tem Frantz, management, and directors to go over the agenda. The meeting lasted about 15 minutes.

Wednesday I participated in a meeting of CAMPO (the Capital Area Metropolitan Planning Organization’s Executive Board).

The board unanimously approved the Wake Transit Art Funding Eligibility Policy. The goal of this policy is to transform civic spaces, foster shared community interactions, and celebrate unique stories and collective history. It is hopeful that this art would improve the customer experience and increase ridership. The funding for art for projects under $50 million would be 1%. Larger projects would have less and projects over $100 million would have .25%. Apex’s staff objected to funding art, but Apex did not have a member present to vote at the CAMPO meeting.

In other action, the executive board also unanimously approved a committee to work on Commuter Rail Cost Share and Financing. Cost share agreements determine the amount of Wake Transit tax revenues that will be budgeted, programmed, or committed to a commuter rail project, as well as any special financing arrangements. It will require action by CAMPO and GoTriangle. CAMPO board members for this committee include the current chair and vice-chair of CAMPO, the mayor of Raleigh, a representative of GoTriangle, a commissioner from Johnston County, and the mayor of Cary.

Thursday I presented a proclamation to Olympic and Paralympic Athletes that represented the United States that are from Cary. These Olympians and Paralympians trained at the TAC (Triangle Aquatics Center) in Cary.

The Mills rezoning proposal was pulled from the consent agenda at council member Liu’s request. Neighboring residents expressed concerns about connectivity and stormwater runoff in the Public Speaks Out portion of the meeting. During discussion council and staff pointed out that these are addressed during the site plan review. Connectivity will not be determined until a site plan is submitted and stormwater runoff is required to meet a 100-year storm.

The Public Hearing for a proposed amendment to the Carpenter Village Parcel K had several speakers. Most were concerned about the height of the building and that the intense use would not fit with surrounding uses.

The Kilmayne Place public hearing also had a few speakers most of which were the applicant and those that worked with the applicant. Nearby homeowners expressed concern about the viewshed and what could go there if this were not approved. This is one of several proposals that have come forward from this property owner over the years.

After a public hearing, the council meeting concluded. The meeting time was about two and a half hours.

Friday’s legislative review meeting with the North Carolina Metro Mayors was canceled due to very little significance that took place for municipalities.

Later Friday the staff and I began reviewing the latest detailed data related to the pandemic. Positivity rates, which have been pointed to by those who oppose mask mandates, are much lower and are a factor of testing. While they are one of many data points, they should not be used exclusively to determine how well a community or region is doing.

The good news is that hospitalizations are trending down, and ICU beds and ventilators are more available. The bad news is that infections continue to be widespread in Wake County. This is significant because infections impact all other metrics and can cause all metrics to start trending upwards again.

I recall just how much each of you, Mayor and Council, enjoyed your time with Mark Robertson. This week, through our Organizational Development Division, we were able to offer time with Mark to more than 80 staff members through several workshops. The feedback we are getting is very positive. Thank you for your support of our continued growth and development.

As a reminder, I will be among the staff joining several of you at the Chamber Mini-City Visit in Charleston from October 25-27. I will remain electronically accessible for those of you not attending this year’s trip. 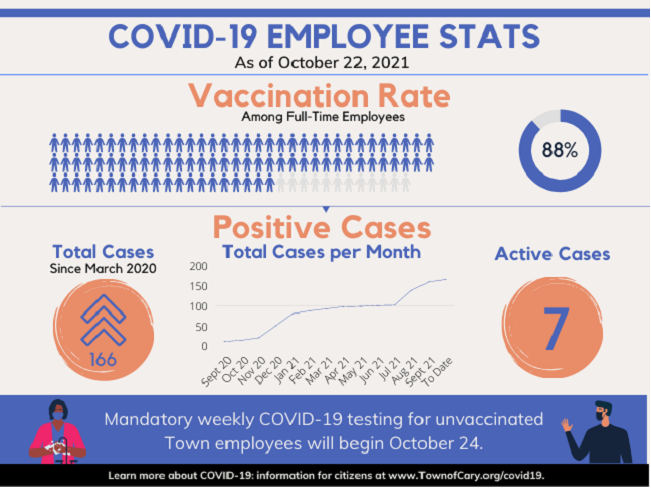 Cary staff is now 88% vaccinated among full time employees. Currently there are seven active cases bringing the total number of cases since the pandemic started to one hundred and sixty-six.

Trips Return to the Senior Center

All senior day trips are available to adults 55+, with many more trips planned for the upcoming season.

The BEYOND: The Cary Film Festival returned to an in-person event and a record number of submissions were received this year. Of the 134 film and screenplay submissions, 35 short films were selected to screen during the four-day event, along with a live table read of the winning screenplay, Identification, by Larry Collins.

The festival hosted three filmmaker workshops – Capturing Social Issues in Film, Business of Film Composition, Screenwriting Masterclass, and three special events for filmmakers and attendees. We welcomed nearly 400 attendees and 18 filmmakers to BEYOND 2021.

Imagine a Day Without Water

On Thursday, Cary joined communities and organizations across the country in the seventh annual Imagine a Day Without Water. Staff participated in the online event by following social media and forums focused on education of the value of water and advocacy for investment in our nation’s water systems.

(The point of the left and/or political favors seems to be a theme… I am an Independent and was not endorsed by either party in my last election. I don’t owe anyone political favors and frankly don’t operate that way. I always do what is best for my community. Believe me, taking daily verbal abuse for masks is not something I enjoy or want to continue but the mask mandate is what I believe is best for Cary at this point in time.)

Next week’s activities include a Chamber Intercity visit to Charleston. Some of the topics include “The Future of Livable Cities”, “Bus Rapid Transit”, and “Branding and Tourism”. Other activities include a meeting of the North Carolina Metro Mayors and Cary Band Day. Happy Halloween everyone!

Well, that is all for this week. My next post will be on Sunday, October 31st.  Although I have Facebook and Twitter accounts those are not the best means of communications with me. Please send all Town of Cary questions or comments to Harold.Weinbrecht@townofcary.org and email personal comments to augustanat@mindspring.com.