Cary, NC — After winning the first game of the season at home, the Canes kept the momentum going with a successful 3 game road trip to start the season with a perfect 4-0 record.

They extended that record to 5-0 last night for the first time in franchise history, winning the first 5 games in regulation Most recently, that was a 4-1 win over another highly talented but frustrated team, the Toronto Maple Leafs.

The Canes had quite the surprise when Toronto native, David Ayres, the emergency backup goalie (EBUG), sounded the siren to start the game. Ayres was in goal when they beat Toronto during that historical game. Nice touch by the Marketing department. Ayres has embraced being a member of the Bunch of Jerks and must have enjoyed seeing some of the Ayres #30 tee shirts still being worn by Caniacs. 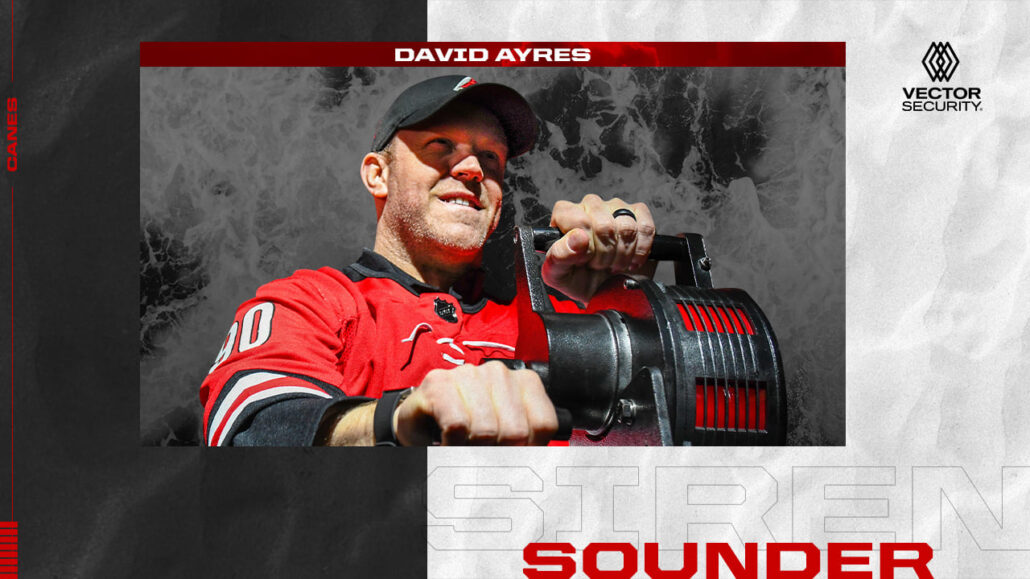 Auston Matthews opened the scoring at 3:25 of the first. After getting the puck from in the far corner, Matthews used his speed and momentum going east to get a step on Ethan Bear who was going west. The talented center ended up beating Frederik Andersen, who didn’t have his stick in the best position or his skate along the post, for a swiped-in wraparound goal.

The Canes had the first powerplay when Pierre Engvall got called for holding Bear deep in the Canes’ end. The first unit personnel was the same as all other games but the look was slightly different. Passes were longer as players were setting up wider on the perimeter. The best chance was by the second unit that had a more concise setup and faster passing with Nino Niederreiter ringing one off the outside of the right post.

Later in the period, Brett Pesce cleared the puck along his backboards, lost an edge and got plastered into the boards by Alexander Kerfoot with Brady Skjei quickly pouncing on top of Kerfoot to bring order to the situation. Late in the period, Skjei chipped a 40’ lob shot into the Leafs’ end as Andrei Svechnikov turned on his jets.

Like a shortstop, Svech picked up the puck mid-air off one bounce and wristed a shot that hit the crossbar and then the post, which had Svech and everyone in the South Lower Bowl thinking it went in. Replay showed it was all iron. The pace of this game so far is fast, very fast as both teams are built for speed with some very talented young players. On the Leafs’ side of the ice, captain John Tavares was having an excellent game as he seemed to be everywhere and always found an opening.

Whatever Coach Rod Brind’Amour said in between periods hit home as it was all Canes in the second. Good chance he said just keep what you’re doing as there was nothing really wrong, albeit the powerplay looked off.

Vincent Trocheck was having a great game, getting 2 breakaways during the game with just missing upper corners both times and was certainly ‘dialed in’ all game. It was hard for the player to figure out how the game was going to be called. Early in the second, Brett Pesce beat Alexander Kerfoot to the puck along the back boards then somewhat lost his footing, bending his knees to regain his balance when Kerfoot came in with a leg high and pasted Pesce head first into the boards.

Linemate Brady Skjei immediately flopped on top of Kerfoot to send an on ice message. No call on either play. Canes evened the score at the 7:02 mark when Andrei Svechnikov got to a puck in the near corner, passed up to Bear on the right point who sent a shot towards the right side of the net about knee high. Sebastian Aho was fully covered at the top of the crease but managed to stretch his unusually long stick for a forward to deflect the puck over the pads of Jack Campbell.

Just over 2 minutes later the fourth line of Crazy 8s, Jordan Martinook #48, Derek Stepan 18 and Steve Lorentz 78, were on the ice when Marty block a shot by Mitch Marner sending the puck to the neutral zone that Lorentz grabbed but had Rasmus Sandin all over his back but this is where 6’4”, 208# Lorentz out muscled the 5’11” 178# defender to slap the puck between the wickets of Campbell to put the Canes ahead and they never looked back. Then came the shocker of the game: Jaccob Slavin got called for a tripping penalty for his first infraction against a player in 2 seasons. His lone penalty last year was for flinging the puck over the glass which he’s apologized for during every game on the Jumbotron. Shortly after Slavo returned to the ice, Jordan Staal put a weak drop pass to Slavo in the high slot. Slavo grabbed the puck continued to skate to the right point then made a slick ‘you go there, I’ll go here’ move on Marner sending a smooth pass down to Niederreiter in the near circle who went around his player and learned off Lorentz’s goal to go 5-hole for a solid 3-1 lead. Later in the period, the Leafs were pressing hard in the Canes end sending a barrage of shots on net with former Leaf, Frederik Anderson making stops even he had to be impressed with. On one play, the Leafs took the puck behind the net and had a shot with Anderson down but Pesce was flat on the ice making a stop with his stick that Andersen gloved to stop play. Andersen gave Pesce a tap on the helmet knowing that saved a goal. 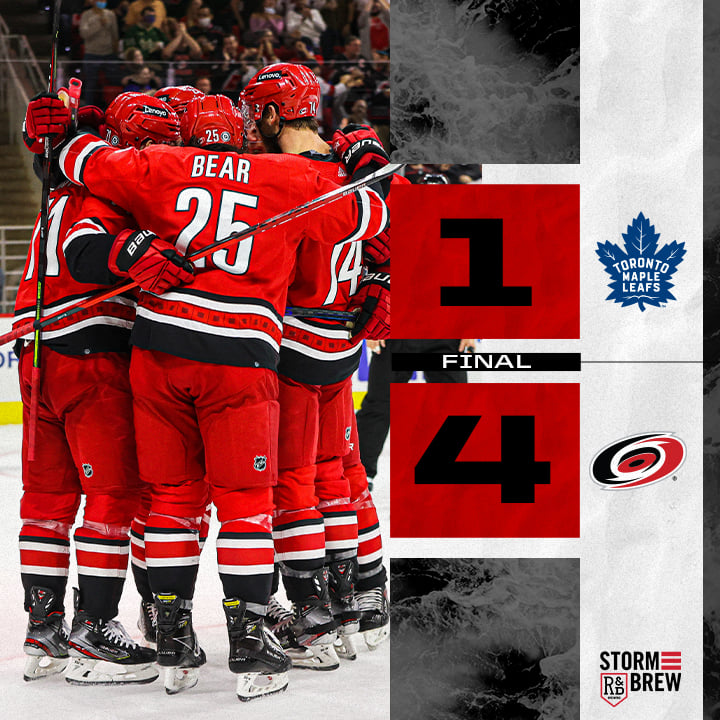 The Leafs are a hurting team, having been trounced their last game by the Penguins 7-1 without Crosby or Malkin. Anyone who knows of what it’s like being a Leaf player in Toronto knows the only way is winning. This is especially true when they have the talent and payroll, anything less than a championship is unacceptable. Those Leaf fans are well into their 6th decade of being frustrated.

The Canes forechecking continues to smother every team they face. Rod has this team with not one but seems to always have 2 players attacking the puck. In the third period, the shifts were noticeably shorter for the Canes while the Leafs seemed to have their top 2 lines on the ice. Forechecking usually wins over exhaustion and that’s what played out. The defense was as solid as they’ve been all season with everyone on the back line having an excellent game.

On one shift in the third, Ian Cole was a wrecking ball, knocking 2 Leafs off the puck then passing up to Jesper Fast for a nice, smooth clear. Leaf Coach Sheldon Keene pulled Campbell with a little over 3 minutes to go which was noticed by the full house of Caniacs. Yes, a full house on a Monday night as word has gotten out, this team is special and attending a game is a blast. And for the past 20 months, everyone is looking for something, anything to celebrate and have fun with people.

With exactly a minute to go Slavo stole the puck below his goal line, flipping it to the neutral zone with Svech again acting like Derek Jeter, knocked the puck to the ice off one bounce then smoothly sliding it into the center of the net to seal the win.

Fantastic start with the next game against another tough team, the Boston Bruins this Thursday. Be There!