Cary, NC — If a diverse group of people coming together to make a batch of beer makes it taste good, then Bond Brothers’ new American Wheat Ale is bound to be delicious.

The brew called, “Crafted Conversations,” stemmed from the brewery’s desire to find ways to bring more people into the craft beer community.

“When you think of craft beer, generally you think of a big, bearded white guy in a flannel,” said Laura Eischen, Taproom Manager & Events Coordinator for Bond Brothers Beer Company in Cary.

Eischen is a member of the RDU Chapter of Pink Boots, an organization that brings together women in the craft beer industry. In light of the social outcries and protests seen in 2020, they wanted to do something tangible to address a big issue. Of over 330 breweries in NC, only two are black-owned.

Local minority business owners got a crash course on making beer and an open platform to have candid conversations on diversity in their industries.

While bringing more diversity to the craft beer industry doesn’t happen overnight or with just one event, the Pink Boots crew was determined to start a ripple effect. An event was created as a means of doing something local, meaningful and tangible in an effort to bring together even more minorities into the mix of drinking, making and working around craft beer.

Hosted at Bond Brothers a few weeks back, the collaboration to make the new brew included 9 local, minority business owners to come together and brew a beer alongside the members of Pink Boots.

“It’s about sharing an experience. We got to share with them our knowledge, love and passion about craft beer and they got to share their experiences of being part of a minority and being a business owner and how they see us diversifying not only our taprooms but our industry,” said Eischen.

Good Day for a Brew Day

On the day of the brew, the group was limited to about 20 people so that proper distancing could happen. In addition to the 9 business owners contributing, members of Pink Boots representing 7 local breweries were there as well.

“We had lots of meaningful conversations about inclusion, subconscious racial bias, the beer industry and why don’t black people drink beer. It was fantastic and everybody shared,” said Eischen. “My hope is that other breweries will replicate this event and one by one, we’ll bring more diversity into taprooms which will bring more diversity into the craft beer world.” 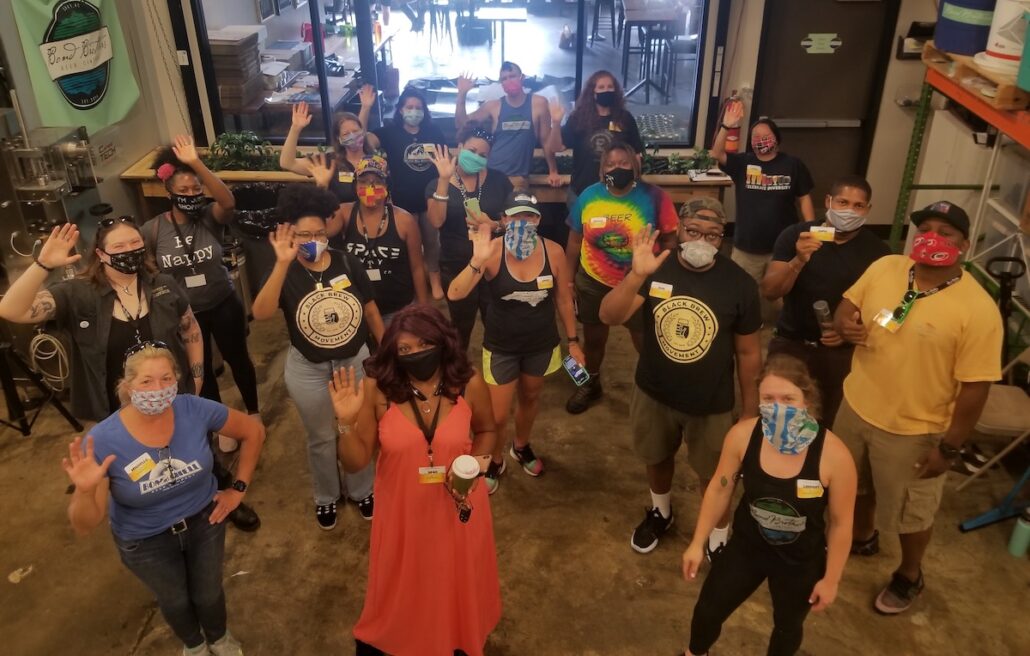 The people behind the new brew, Crafted Conversations.

The beer aptly named, “Crafted Conversations” will be available starting this Sunday, September 20, 2020 in the Bond Brothers taproom during its release celebration from 1-4 PM.

The beer will be available for a limited time on tap or to-go in a 32 oz. Crowler. Crafted Conversations will also be made available later in the week in 16 oz. cans, sold individually or in a 4-pack.

Part of the proceeds of the beer are going to the North Carolina Craft Brewers guild Diversity Scholarship Fund and that allows minorities to have opportunities to expand their experiences in education in the local craft beer industry.

Minority businesses will also be featured and on-site during the release. The business owners and female craft brewers from Pink Boots who made the beer possible include:

Meet the Farmers: Queen B Farms