Cary, NC — Since 1996, the small businesses that make up the Cary Downtown Farmer’s Market have provided locally crafted goods, fresh-picked produce and other unique finds.

A staple contributor to the market for more than 10 years is Queen B Farms, known for their farm-raised beef, chicken and eggs.

This 200+ acre family-run farm is a 45-minute drive from Cary in Mebane, NC and is owned by the husband and wife team of Eric and Nita Bunker along with their 18-year-old son, Charles. The farm has been in Eric’s family 4 generations and will be passed to Charles, making it 5 generations. 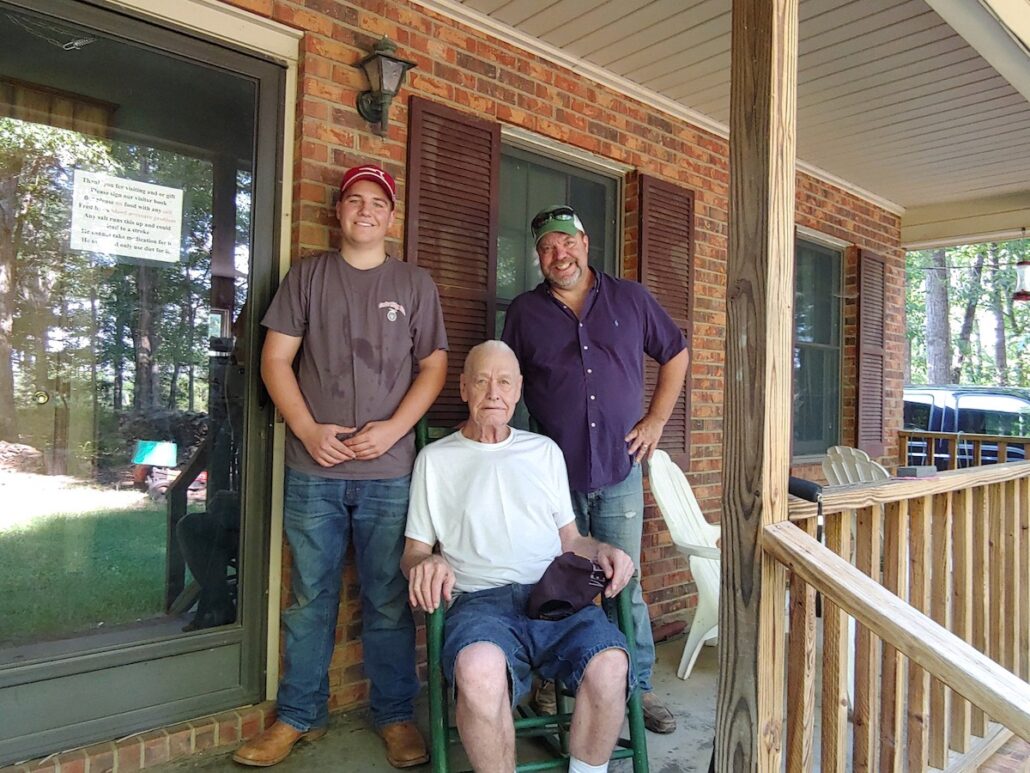 The story behind how the Bunker family got started farming and what led to the name, “Queen B” cannot be made up. In fact, Google it — it’s true!

The “original Siamese Twins,” named Eng and Chang, were born in the early 1800s in and were on exhibit, touring around the world with the likes of Barnum and Bailey. The twins, originally born in Siam (modern-day Thailand) picked northern Wilkesboro, North Carolina of all places to settle after their days of touring to become farmers. (Still not joking.)

“Eng, which was the taller of the two twins is my husband’s great, great grandfather. That started the tradition of his family becoming farmers and raising animals,” said Nita.

It wasn’t until Eric took over the farm at age 18 that it got its current name. He was at a bank to set up a business account and the teller asked for a name. “Queen B,” combines the first letter of the last name, “Bunker” and Queen, which is Eric’s mother’s middle name. To this day, Nita calls it an “off the seat of his pants” decision, but she loves it nonetheless.

Committing to No Preservatives, Additives, Hormones 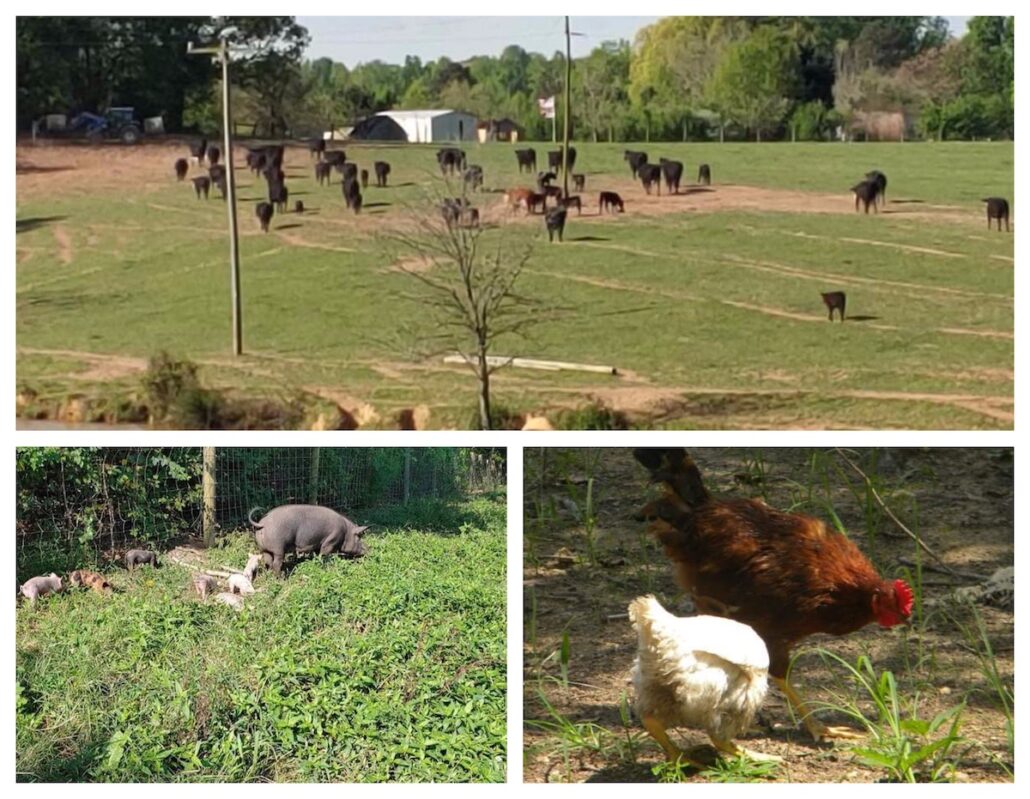 Just under 30 years ago, the farm’s production of meats changed suddenly around the time Eric and Nita were just married. Eric was diagnosed with Ulcerative Colitis and had his colon removed entirely. They later discovered that preservatives in foods he was eating were a major factor.

Together, Nita and Eric started eating what they could grow and committed to producing meats with zero additives, preservatives and no added hormones, antibodies or artificial ingredients.

“Then the business just grew from there because I saw the benefit that it was having for our family and we wanted to share that with others,” said Nita.

On top of these commitments, they also are firm on not letting a single animal suffer or die in an inhumane way and their nearby butcher is certified humane as well. Their chickens and cattle are all riased naturally with full access to sunshine, fresh air, fresh water and grass pastures.

Being Part of the Market Community 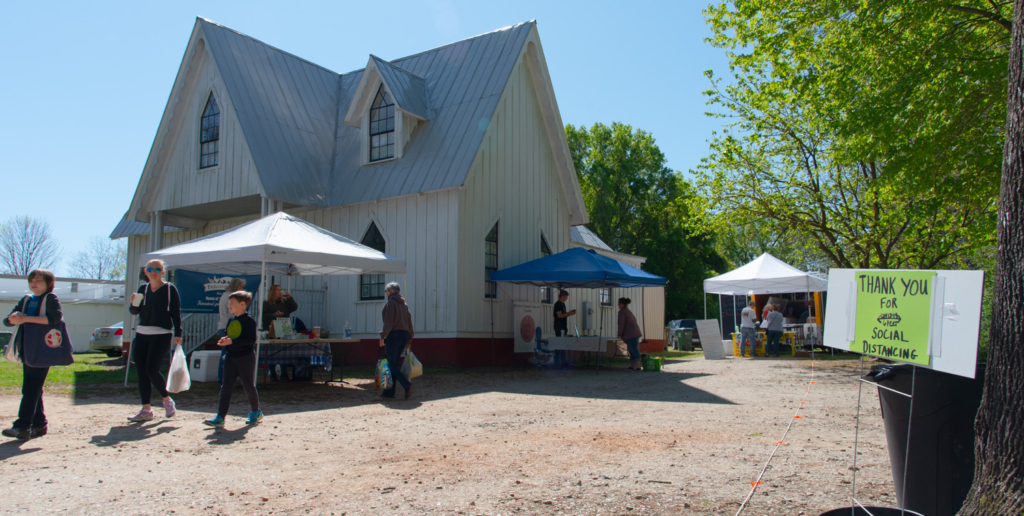 Markets like Cary’s are crucial to this family having a way to sell their product, especially since they do not sell directly on their farm. This is to keep tight reigns on biosecurity for their animals by protecting them from exposure to unseen bacteria, viruses or parasites.

“It gives us a good outlet to interact one on one with the customer and it’s a good way to sell and market our product,” said Nita.

Dan Pike, President of the Downtown Cary Farmer’s Market Board had this to say about the Bunkers:

“They are so welcoming and inviting to all of the patrons of the market and they are so willing to talk about how they handle their animals and process their meat. The biggest thing is their product — it is by far the best meat my wife, Joy and I have ever had.” 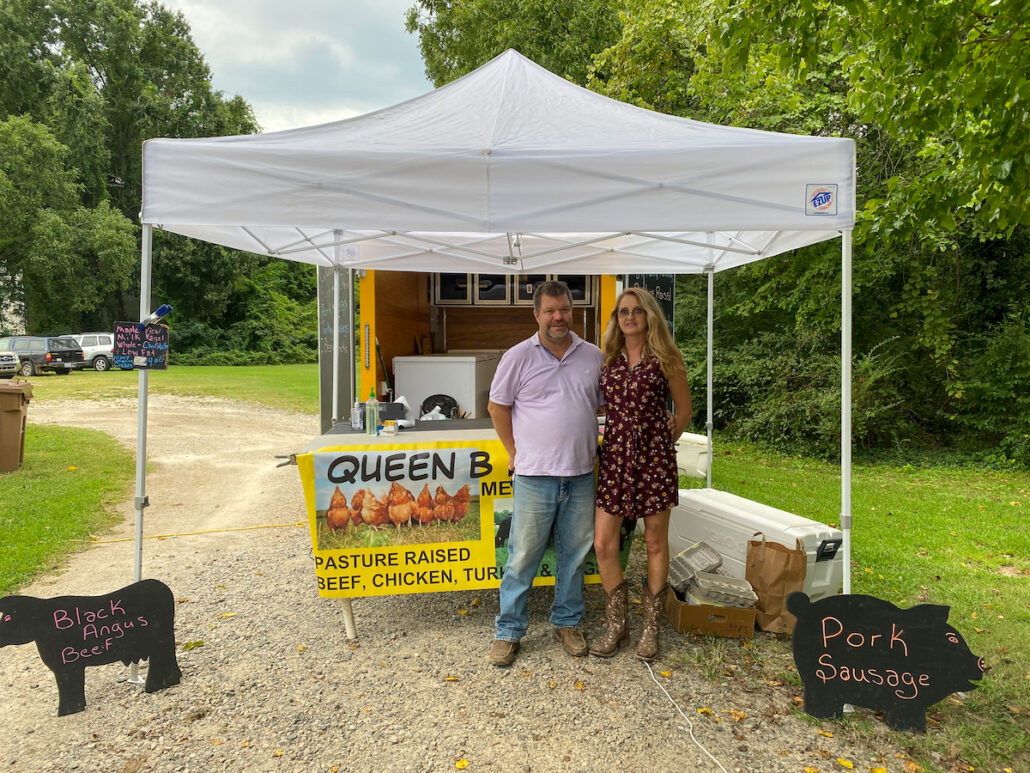 Eric and Nita Bunker stand alongside their trailer and stand at the Downtown Cary Farmer’s Market.

“The main thing has always been about being able to work together as a family. So, we’re working hard, but we’re together and I think that’s just wonderful, especially for raising children,” said Nita.

As the next to inherit the farm, Charles is attending Kansas State University to study Animal Sciences and Beef Production.

“Family farms are really disappearing at a rapid rate and to be able to maintain the farm and keep it in the family, it’s a wonderful thing,” said Nita.

Come visit the Bunkers at the Cary Downtown Farmers Markets, every Saturday morning from 8 AM to 12 PM located at 135 W. Chatham Street.

Story and featured image by Ashley Kairis. Other images provided by Nita Bunker.

Offseason Updates from the Carolina Hurricanes