Cary, NC — This week the Cary Town Council, in an effort to bring about actionable change, created a task force whose mission will be to help foster diversity and inclusion across the community.

In light of what’s happened in Cary and throughout the country in recent weeks, Mayor Weinbrecht signed president Obama’s pledge this week related to police use of force.

This pledge means that Cary intends to join cities throughout the country in taking these four specific actions:

Task Force for Diversity and Inclusion

In living out this pledge, Councilwoman Lori Bush brought the idea forward of creating a task force for diversity and inclusion that would be directed out of the Town Manager’s office.

Inga Kennedy, founder of an Atlanta-based urban planning firm has been hired to help in this effort according to Town Manager Sean Stegall. Kennedy and her team specialize in “effective outreach with minority communities” and have worked with Cary in the past.

“Sometimes great ideas and well-intended ideas are not actionable in a very practical way,” said Stegall. He says the consultants will ensure a higher level of objectivity and scrutiny that the staff welcomes

“It will take some time, but I don’t think anything worth doing ever happens quickly,” said Stegall. 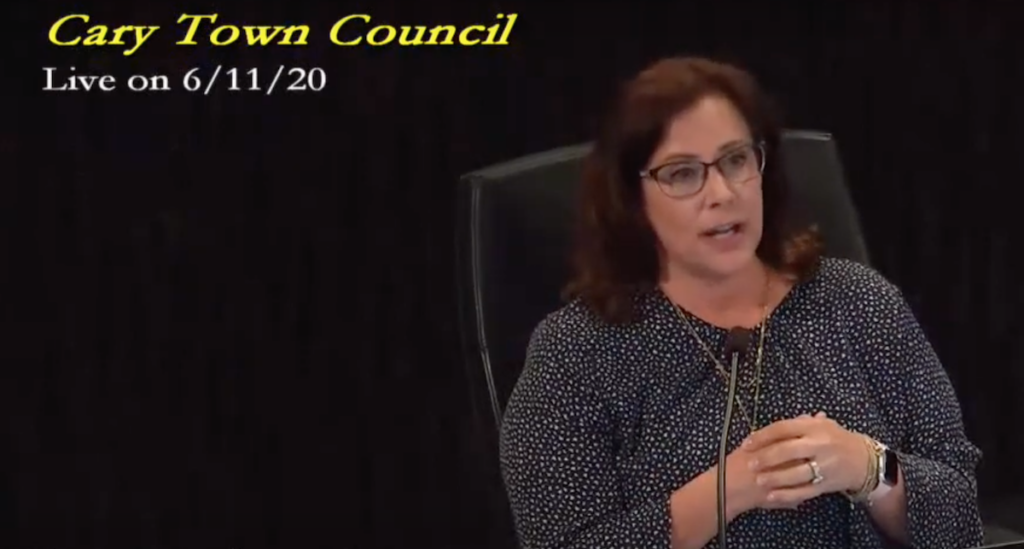 In discussion, councilwoman Bush said, “Many of us are concerned that we might say the wrong thing or make a misstep, but I also know now is not the time to be afraid of that, but to rather open our hearts and listen and find ways to have actionable change.”

Councilmembers Smith, Liu and Mayor Weinbrecht also spoke in favor of the idea, but expressed a desire to see specific tasks, a timeline and a clearly defined roadmap forward.

“We’re not doing this to make people feel good, we’re doing this for real change. To do real change, we’re going to do it the Cary way and the best way we can,” said Weinbrecht.

Councilwoman Liu said, “I think this initiative would do a lot of good, but I agree with the Mayor that we want a clearly defined scope of the project, the timeline and what exactly we want to accomplish. We want action and items with clear goals and real steps we can take.”

Perhaps the most uneventful public speaks out in months happened last night with just one comment that was sent in prior to the meeting. Town Clerk, Virginia Johnson summarized the comment saying it was, “About the demographics of the Cary Police Department traffic stops,” but gave no further details. 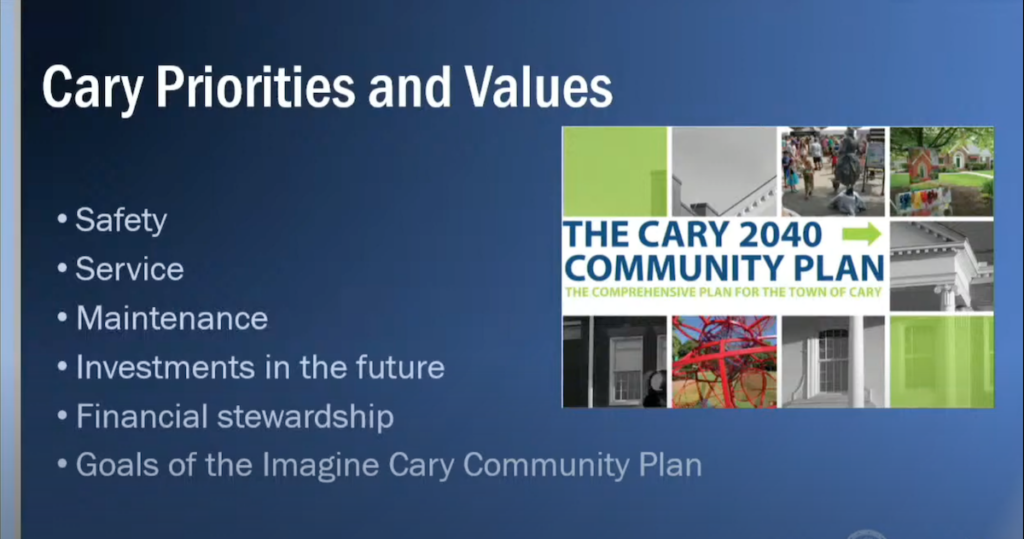 In the first public hearing of the night, the Town’s Chief Financial Officer, Karen Mills, presented an overview of the Fiscal Year 2021 recommended budget. This budget will be up for approval in the scheduled June 25 meeting of the Town Council.

The proposed budget would take effect, if approved, on July 1, 2020.

The recommended total budget rings in at $427.6 million, a 8.6% increase from the prior fiscal year budget of the Town, including:

Mills said Cary’s property reevaluation on January 1, 2020 demonstrated that values have grown in the last four years. Even with the 5-cent increase, the proposed tax rate ranks as the lowest recommended municipal tax rate in Wake County.

The budget also recommends maintaining the same amounts allocated to essential services and nonprofits. The budget does not include an increase in new positions or any merit increases for Town employees.

Mayor Pro Tem Frantz mentioned there have been discussions about the potential of a smaller tax increase followed up in a year or two with another increase versus the 5-cent increase all at once. In addition, he brought up reducing utility rates in FY 2021 given the amount that is in the reserves.

According to Stegall, there should be updates in the coming days from his staff on if that could be a possible route for the budget. 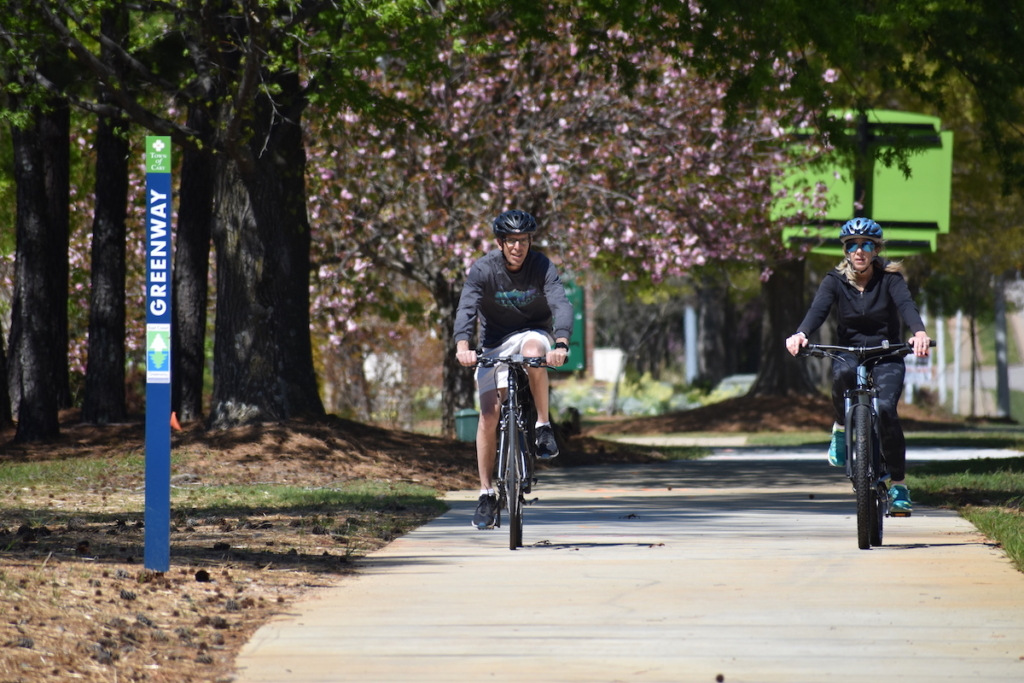 Mills also provided an update on the 2019 Shaping Cary’s Tomorrow Bond Referendum for transportation and park projects in Cary. According to Mills, the total funding for these projects in FY 2021 is $40.8 million. These funds will be dispersed as follows:

Just two comments were received from the public, the first recommended more funding for the GoCary bus system, more programs for at-risk youth and more minority community outreach as well as support for small businesses, especially in downtown. A second commenter recommended the Town take savings from canceled Parks & Rec programming due to the pandemic and redirect it towards street and greenway payment.

For any citizens wanting to give their input on the budget, comments can be submitted to the Town prior to or during the June 25 council meeting when the council will vote on its adoption. 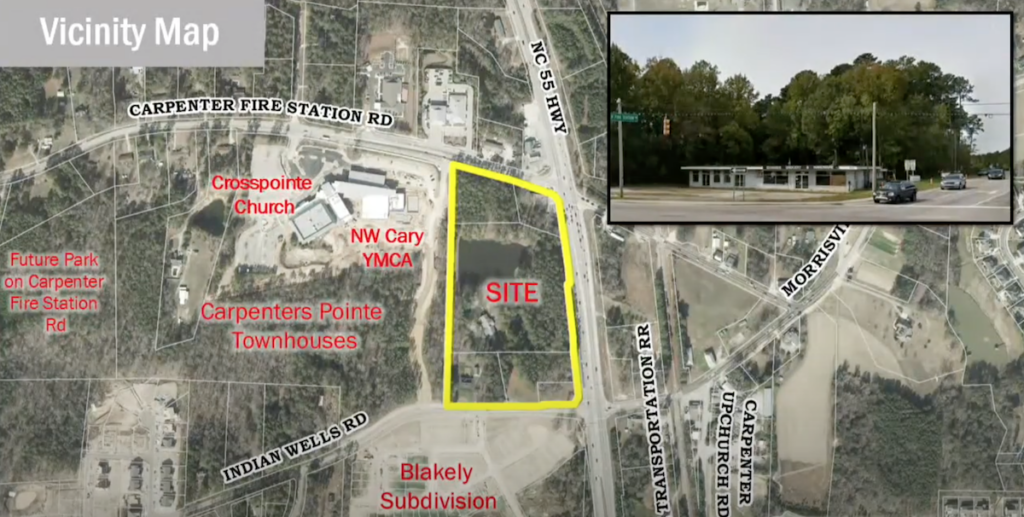 Next to the NW Cary YMCA and Crosspointe Church is 14.6 acres of land that used to be home to the Edwards Grocery Store. This land is now under review to be rezoned to a Planned Development District Minor. Under the proposed conditions, the existing watershed protection would remain as part of the Jordan Lake Subdistrict.

Principal Planner, Katie Drye presented the plans which include:

The council discussed topics of concern including parking, streetscapes, density, access points as well as screening and tree canopy preservation before forwarding the request to the Planning and Zoning Board.

“I want to know what five stories with a 20-foot streetscape looks like from the three sides,” said Mayor Weinbrecht. “Is it going to be overwhelming, towering over everything or is it just going to be a bit above the trees that are planted?”

Weinbrecht said outside of his density concerns, he is happy with the conditions offered so far and hopes to continue to fine-tune them moving forward.

After about 40 minutes of presentations and discussion, the council forwarded the matter to the Planning and Zoning Board for further review. Before the matter returns to the council for final approval or denial, a study will be conducted by the Town on parking needs for multi-family housing developments.

The second zoning-related public hearing of the night was a request to amend the conditions of the previously approved 10.2-acre district at the SW corner of Morrisville Parkway and NC-55.

“Although we don’t ask for our applicants to submit certain conditions, we certainly can say that we would be much more favorable to the increase in density if the conditions about lighting and additional tree planting along Morrisville Parkway were submitted as official conditions,” said Councilwoman Jennifer Robinson.

One public comment submitted against the amendment was a concern of increased noise associated ambulances responding to emergencies with the senior community that would live there.

In the discussion, Frantz spoke up to say, “I have never heard anything more nimby than opposing a senior living community because of the potential concerns regarding emergency vehicle noise. That is absolutely stunning to me and I hope should that person who made that comment ever need emergency services that they require one of those quiet ambulances.”

Councilwoman Ya Liu added her appreciation for the increase in units as the community matures and to help accommodate the 5,000 seniors added to the Town each year. This item also moves forward now to the P & Z Board for review and recommendation.

Before closing the meeting, Mayor Weinbrecht acknowledged the spike in COVID-19 cases in Wake County in recent days and weeks.

“I urge everyone to be safe. The negativity, the nastiness, divisiveness is growing rampant,” said Weinbrecht. “Please be kind and overall, just be Cary.”

Story, featured, and biking photos by Ashley Kairis. Others images were screen captured from the virtual meeting. Note: Featured image is from a prior meeting before social distancing and virtual meetings were in place.

Livening Up My Landscape