Monday afternoon I met virtually with the Epic Games representatives. We talked about their future plans and pledged to work closely with each other. I am so grateful that Epic Games is in Cary and look forward to helping them thrive and prosper.

Thursday I was sent the following notification by Cary staff regarding the November Gala:

In agreeance with our Emergency Operations Center staff, we believe the best step moving forward to help decrease the spread of COVID-19 would be to postpone the November 13 Cary150 Gala. While celebrating our community and its anniversary remains important to us, our priority is the safety of our citizens. Since this event entails a large crowd and dinner, it will be in our best interest to postpone until a future date when it is safe to gather and eat. Future communications will be shared closer to the rescheduled date.

Ticketholders and sponsors will be refunded, and all vendors involved will be paid for their work so far. The future rescheduled date will be in 2022, but the exact date is undetermined at this time.

The NC 54 widening update wasn’t good news. While there were some sections of 54 widening on the ten-year plan, called the STIP, others were not. In addition, the state has pushed back many of the projects in the STIP due to funding shortfalls.

These shortfalls were due to less tax collected from gas due to less travel during the pandemic and the increased use of electric vehicles. The state is currently working on a plan to redistribute the taxing burden for the funding of roads.

Cary and Morrisville have town limits that are intertwined. Staffs from both municipalities are looking at equitable swaps to reduce confusion and increase efficiency.

Cary reported 74% while Morrisville reported about 80%. Both towns have been using incentive programs to get employees vaccinated. Both towns also noted that customer-facing employees will be vaccinated except for some public works people who are in trucks. Neither town plans to mandate vaccination for employment.

What we learned was public displays of dissatisfaction, like protests or resolutions, against the school board or the county will only exacerbate the problem, (telling another governing entity how they should be doing their job makes them defensive and often results in undesired results).

Instead, the best way to proceed is to work closely with the school board members and school staff individually to find out details of why they are doing what they are doing. In the past, I have had meetings with school board staff and had them explain each and every reassignment and cap.

It is also important to find ways to partner with the school board to share facilities. Having the school board and county as partners, rather than enemies, will always give better results. In addition, it is essential for elected officials to understand that every property owner has a right to develop their property and they can do it at any time.

In fact, property owners can all develop at once if they match the current zoning. That is the law and that is their right. It is the Wake County School Board’s responsibility to provide schools, and the developer and town have no legal say in the matter.

It is important to note that towns provide the school board with development information long before it happens. So, the school board knows that development is coming. Their issue is that they can’t get enough funding and land to build the schools. And with the lack of land in Western Wake, they will need to come up with new school models for future schools.

So, IMHO, voting against development using schools as a reason will likely result in lawsuits that a town will lose (I have seen that time and time again over my decades as an elected official).

Reports of a budget deal in the General Assembly and “behind the scenes” discussions with the Governor beginning in earnest.

Public Safety – nothing new to report

Economic Development – nothing new to report

Some of the Question and Answer included:

Chapel Hill Mayor Pam Hemminger: With transportation programming challenges and delays in future projects, are you looking at ways to avoid losing federal grants that require matching state dollars? In Chapel Hill we planned for a BRT project that is now in danger of losing federal funds if we do not find state matching dollars.

Secretary Boyette:  The Prioritization Workgroup and our team are looking at ways to hold projects harmless as we move forward and matching federal grants would certainly be a part of that.

Secretary Boyette: We are currently having supply issues, but we have the needed additional rail passenger cars on order. Amtrak “has a large order” in front of us and NC will be right behind them for our new rail cars.

Raleigh Mayor Baldwin: Could we consider doing a demonstration project or pilot program that showed people how commuter rail might look in practice?  It could help to create interest in expanding commuter rail in our state

Matthews Mayor John Higdon: Can you speak to conversations in the General Assembly about funding for highway projects around the state?  We are worried about the lack of funding for projects we have in the STIP, especially US74/Independence Blvd.

Secretary Boyette: There has been good conversation with members of the General Assembly about the need for additional funding, still not sure what we will see in the state budget but hoping for some increases. The more people calling for an increase in funding for highway projects with the General Assembly the more likely we can get something in the works now and in the future.

The meeting concluded after about 45 minutes. 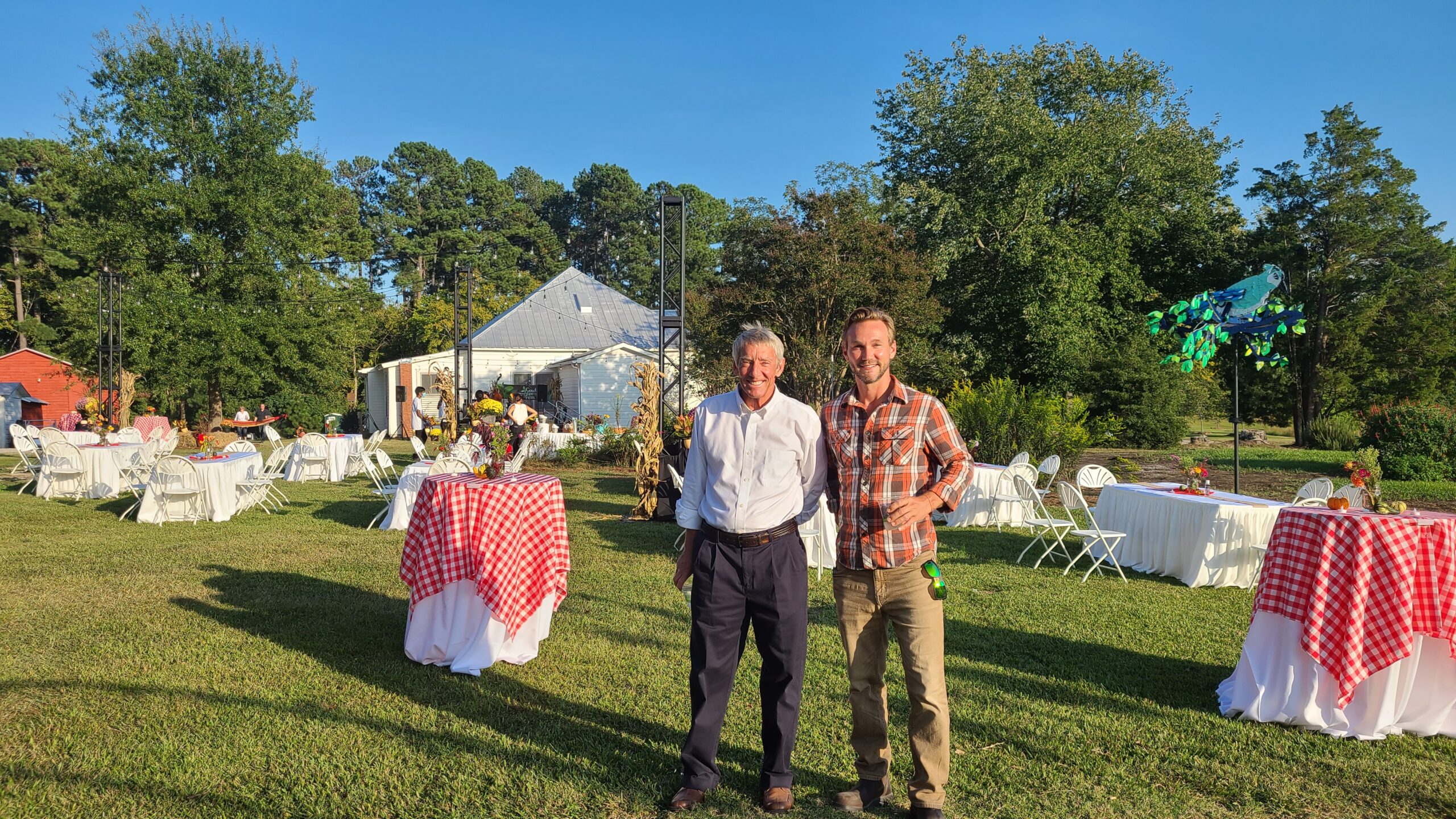 Good Hope Farm is owned and supported by the Town of Cary along with the collaboration of four non-profit organizations: Piedmont Conservation Council, The Conservation Fund, NC Community Development Initiative, and Conservation Trust For North Carolina.

The goal of Good Hope Farm is to honor Cary’s agricultural heritage while increasing the community’s access to farmland and connecting its residents to local, healthy food. The Farm license plots up to two acres to new and expanding farmers, with all necessary equipment and infrastructure available on site. The farm features a demonstration garden and offers agricultural and nutritional educational programming

. This was their biggest fundraiser of the year. I, along with several others, were provided a tour by Thomas Saile, the Farm Manager. I encourage everyone to visit and support this unique and special place.

The town manager’s report for this week includes:

It was nice to have the opportunity to connect with our neighbors last night at the Cary/Morrisville meeting. I would like to thank staff that were in attendance and those who helped presenters prepare for the discussion with Morrisville’s elected officials.

In other news, Government Technology named Chief Information Officer (CIO) Nicole Raimundo, CIO of the Year. The award is in recognition of her exemplary technology leadership and public service to the Cary community. Congratulations, Nicole!
See you soon. 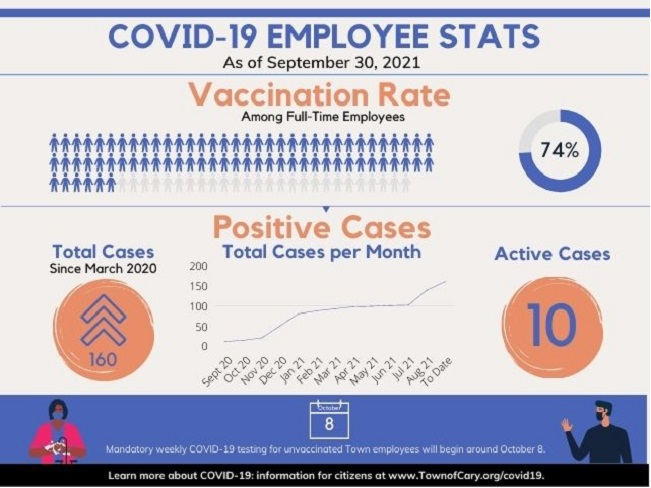 There are currently 10 Cary employees with COVID which brings the total to 160 since the pandemic started. Statewide hospitalizations have now been under 3000 for a couple of days after being close to 4000 a couple of weeks ago. 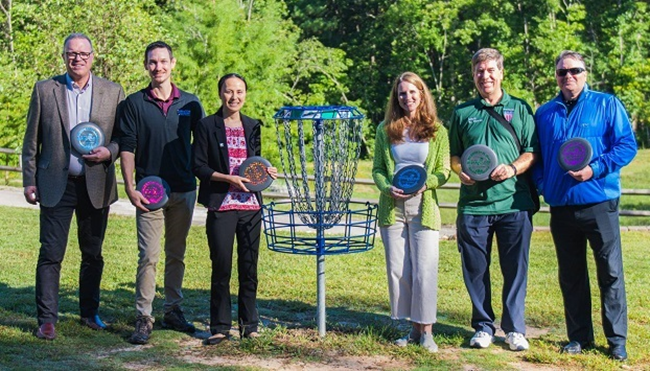 On Saturday, Council Members Ya Liu and Jennifer Robinson and Morrisville Mayor TJ Cawley were on hand to celebrate the dedication of the Diavolo at New Hope Disc Golf Course, which opened in October 2020.

The dedication was one of several events held over the weekend as part of the Diavolo Disc Golf Festival, including Glow Doubles, a putting tournament, and the Devil’s Challenge, touted as the “longest hole in the world,” extending across the farthest two points on the course.

The building permit has been approved for PennyMac’s new office at 1000 Centregreen Way. The permit allows for interior alteration of the existing 16,837-square-foot office suite. In addition, the building permit for the Rogers Building at 149 East Chatham Street has been submitted and is currently under review. The Rogers Building is a new 3-story, 53,427-square-foot mixed use building with office, assembly, and retail uses located on the Rogers Motel and service station properties at the corner of East Chatham Street and South Walker Street. The development plan for the project was approved in October 2020 and the downtown development agreement was approved in July 2021. 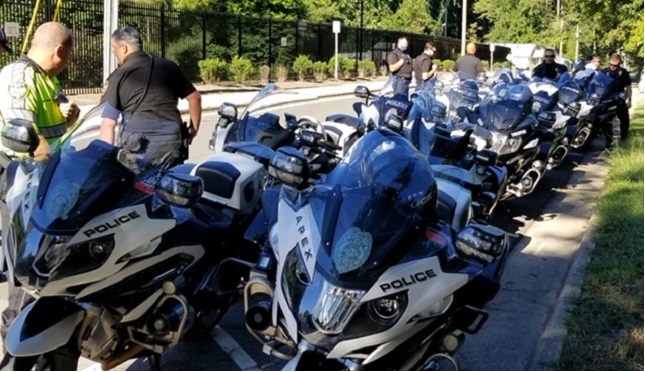 On Saturday, Police Captain S. Wilkins, and Lieutenant B. Brame participated in the 5th annual “A Day Behind (handle) Bars” motorcycle ride to benefit the NC Law Enforcement Torch Run for Special Olympics. Captain Wilkins and Lieutenant Brame were joined by motorcycle officers from across the region to include Apex, Holly Springs, New Bern, and the Highway Patrol. Officers escorted over 50 motorcycles to various locations throughout the area ending at Green Level Baptist Church.

This year Cary was selected for an additional audit of our employee retirement processes and inputs. The audit concluded this week and Cary was issued a clean opinion. Also, the annual financial audit is still underway, and we are expecting similar positive results at its conclusion.

The week of September 26 – October 2 marks the inaugural celebration of Source Water Protection Week. Cary has a long history of protecting its drinking water source, Jordan Lake, through water resources planning, regional partnerships, capital improvements, and watershed protection funding. Utilities staff have been assessing our response capability to situations that would threaten source water, such as chemical spills, by developing an emergency response plan and participating in tabletop exercises. Findings from these efforts will be used to update our source water protection plan and improve our ability to be a good steward of one of our most precious resources.

Hybrid Zoning Board of Adjustment
Monday, Oct. 4 at 6:30 PM

Next week’s activities include the SAS Championship media day, staff meetings, a meeting on Cary-RTP Rapid Bus Extension, a meeting of the North Carolina Metro Mayors, and the Diwali celebrations.

Well, that is all for this week. My next post will be on Sunday, October 10th.  Although I have Facebook and Twitter accounts those are not the best means of communications with me. Please send all Town of Cary questions or comments to Harold.Weinbrecht@townofcary.org and email personal comments to augustanat@mindspring.com.