Cary, NC — Other than meetings, there was not a lot going on this week.

My Monday meetings were canceled due to a lack of new information to discuss.

Tuesday I met with a husband and wife that were part of a Leadership Connection from the NCNA Leadership Academy. They are from outside the triangle and were interested in running for public office. I gave them my thoughts on leading, governing, and running for office. Our conversation lasted about thirty minutes.

The VP of Economic Development gave the following report:

The director of Economic Development reported on several projects around town. The Fenton remains on schedule for opening in April. The downtown park’s bark bar is currently under construction. The views of the park from the construction of the Walker are “stunning”.

The South Hills mall is up for purchase, and we should hear an announcement in a month or so. The development at the site of the old Rogers Hotel will be underway soon with the first phase being the construction of the new wide sidewalks.

The Economic Development concluded after about half an hour.

Budget proposals include major investments in infrastructure BUT we need to continue to advocate to have the bad policy provisions in House removed – both Senate and House members need to hear from local leaders.

The House and Senate will likely only meet one day next week.  It will be important to reach out to your delegation about these provisions as much as you can.

The three bills listed below have been signed by Governor Cooper. Leo John of the NCLM Counsel for Legislative Affairs, will give us a summary update on the criminal justice reform legislation this year and how they impact municipalities during our next Weekly Zoom Meeting.

As you’ll see in this memo from Susan Moran, we will have to conduct a post census redistricting process. While we greatly improved the districts’ balance with the June adoption of a new boundary map, there is more we must do, and we plan to get started at our Sept. 23 work session.

I also want to bring to your attention the new COVID-19 Employee Dashboard within the Public Safety Update section. ‘

This continuous dashboard will keep us informed as our COVID-19 cases and vaccination rate continue to evolve.

I hope everyone has a safe and enjoyable holiday weekend. 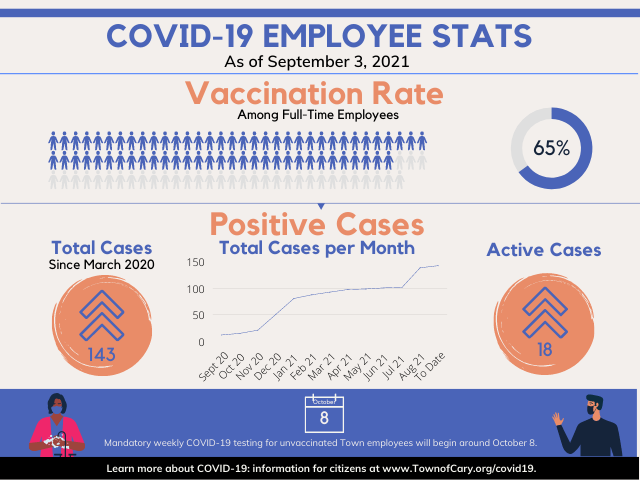 The vaccination rate among fulltime employees is at 65%. There are currently 18 positive COVID cases among employees which brings the total number of staff cases to 143 since the pandemic started.

The Return to Lazy Daze 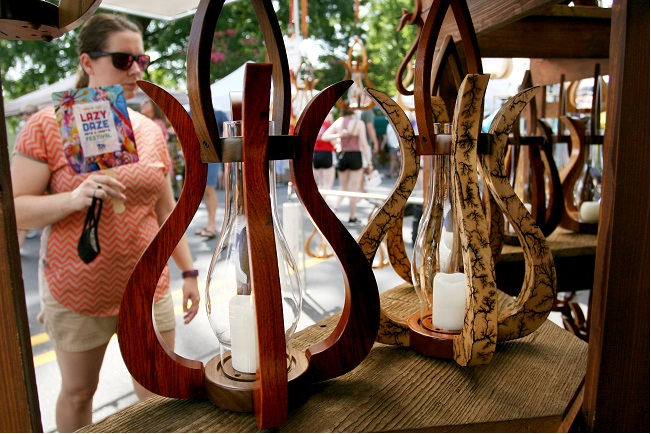 The 45th annual Lazy Daze Arts & Crafts Festival returned to Downtown Cary. After being canceled in 2020 for only the second time in its history, Lazy Daze welcomed over 200 vendors and an estimated 25,000 attendees to fill Town Hall campus last weekend.

This year was scaled down compared to past festivals, eliminating indoor programming and spacing out the booths to provide for social distancing.

Although attendance was approximately half of normal years, attendee feedback has been overwhelmingly positive. Ninety-two percent of participating artists reported being satisfied with the event with many reporting brisk sales.

In addition to hosting a Unified Command on site for incident management, 311 Citizen Advocates were stationed at The Hub to provide non-emergency assistance to attendees.

To Trash, Recycle, or Compost 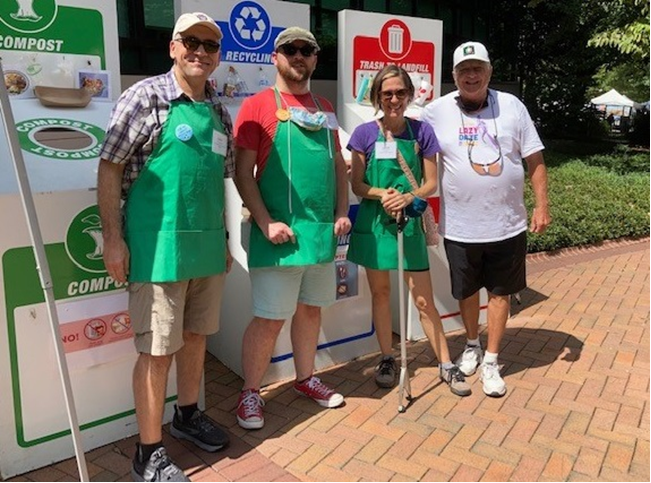 Council Member Jack Smith and other members of the Environmental Advisory Board partnered with Toward Zero Waste at Lazy Daze to staff the waste station.

They helped festivalgoers identify and properly dispose of their trash, recycling, and compostable materials.

Most of the compostable material came from the Sister Cities Beer Garden where they showed their support for environmental efforts by serving draft beer and wine in compostable cups and served food in paper food boats. 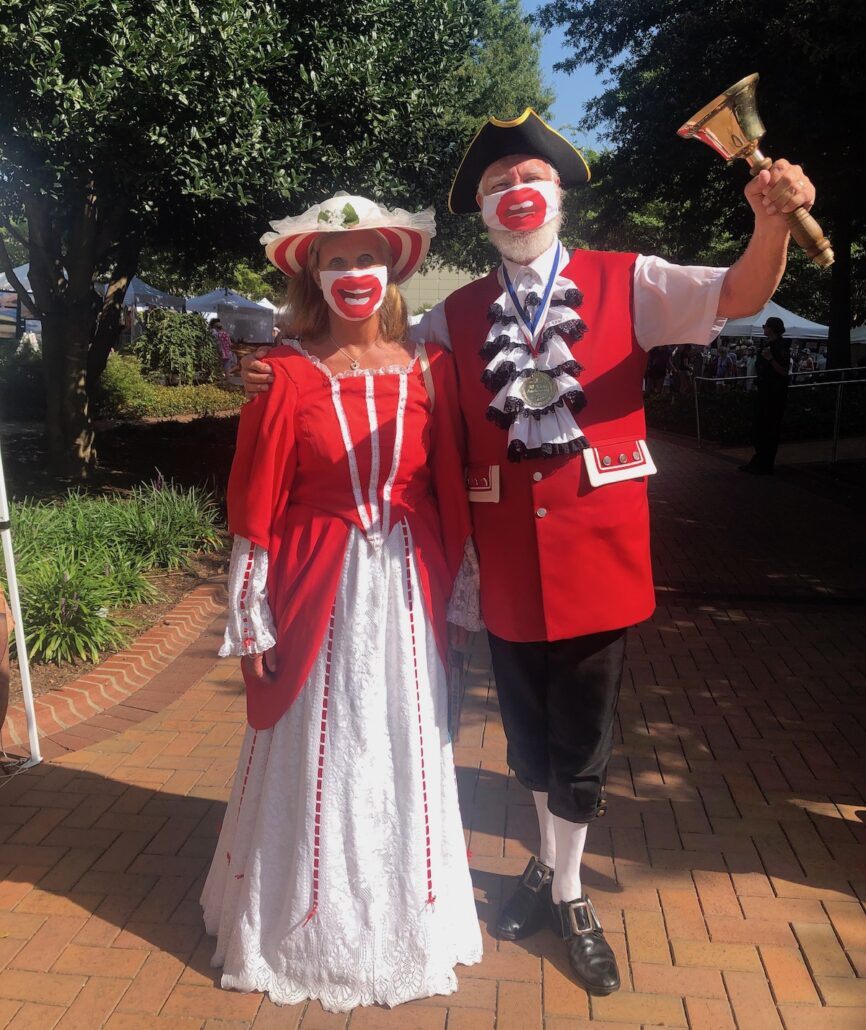 In addition to visiting the council meeting to officially kick off Lazy Daze, the Town Crier duo, Mary, and John Webster, met with Cary150 Chair Sarah Martin and Staff Liaison Virginia Johnson to learn about what has occurred and what is being planned for the celebration year.

The group watched the Cary at 150 Documentary by local director and Emmy winner Hal Goodtree. Other discussion topics included the July’s Urban Mapping Projection show, gala, and the community scrapbook. Additional information about these celebration initiatives are available on the Cary150 website, www.Cary150.org.

The 2021 Cary 101 program kicked off its first session on Wednesday evening.

To accommodate different comfort levels and mitigate the risks of COVID-19, participants have the option of joining each of this year’s sessions in person or virtually. This week, the class learned about Cary’s culture, the origins of Cary, municipal government, and finance/budget.

Next week they will attend Thursday’s Council meeting to witness government in action. Remaining sessions will showcase how different departments work to coordinate Cary’s projects, programs, and services.

Seventeen citizens are enrolled in the program which runs through November 3.

My Tree, Our Tree is Growing

The My Tree, Our Tree giveaway is back and bigger. This fall, again using a contactless process, volunteers will distribute 600 native trees of six different species to Cary citizens.

As those trees thrive, they will enhance the community’s tree canopy and bring beauty and biodiversity to residential landscapes.

Registration opens September 29 at 9 a.m. through myCary for the Saturday, October 23 event. Additional details can be found here.

This was a great way to connect some of the outreach initiatives both the NAACP and the Cary Police Department are doing. Chapter President Gerald Givens expressed interest in partnering with Cary on future outreach projects.

Despite the lower-than-normal participant numbers, we were able to offer a league in every age group, and the season was a great success.

Many citizens stated they were grateful that we were able to provide recreation opportunities again, and we did not have to postpone any games or practices due to COVID-19.

The Coaches Kick Off Classic is a partnership event between Cary and the North Carolina Soccer Coaches Association (NCSCA) and is the largest boys high school showcase event in the nation for public, private and charter schools varsity soccer programs.

There were 77 teams that played 54 games, and approximately 3,000 tickets were sold for the event. Thank you to our sponsors for the event: Greater Raleigh Sports Alliance, Hampton Inn Cary / Raleigh, and Backyard Bistro.

Utilizing the site’s Supervisory Control And Data Acquisition (SCADA) system, operators located at the Cary-Apex Water Treatment Facility were able to monitor flow into and from Raleigh, ultimately reaching a rate of 2.1 million gallons per day for a brief time.

Cary also monitored system pressures which were stable, and no issues were found within Cary’s distribution system. 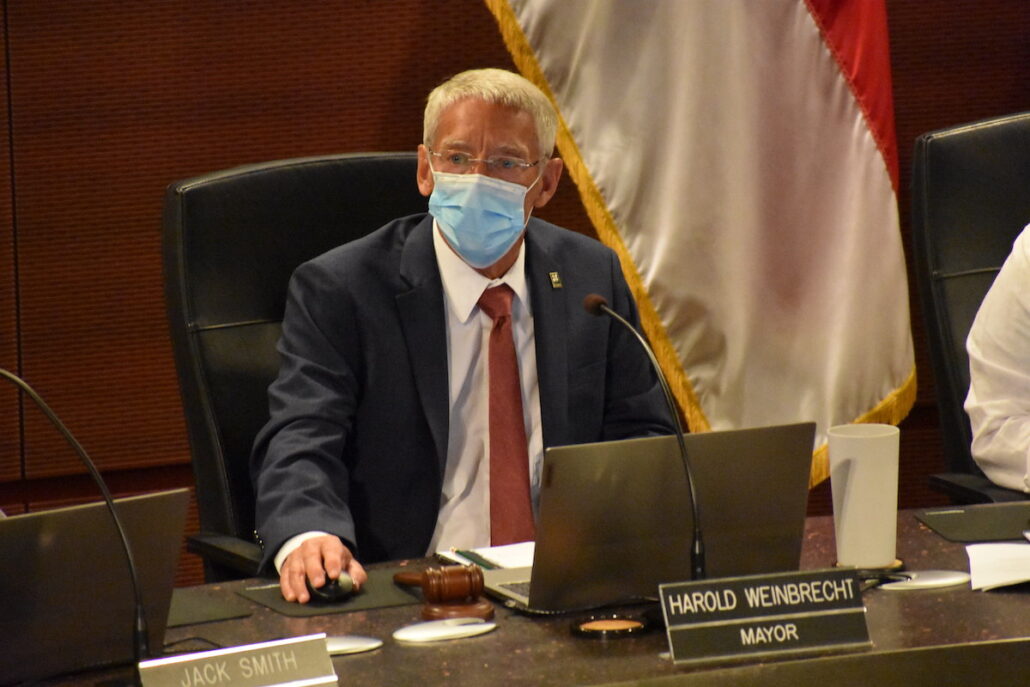 Emails from citizens this week included several complaints about the Black Creek Greenway closure. Here is an excerpt from Mayor Pro-Tem Frantz’s response which provides a lot of helpful information:

“… Phases I & II of Black Creek Greenway (adjacent to Wessex) were originally constructed over 27 years ago and extend approximately 2.5 miles between Old Reedy Creek Road and West Dynasty Drive. The greenway has been severely impacted by heavy rains and flooding over the years requiring significant investment to repair and better prevent storm damage. Unfortunately, however much of the greenway remains in flood prone areas and continues to deteriorate. The greenway also does not meet the town’s minimum design standard of ten feet wide for asphalt trails and twelve feet wide for the bridges. Phases I & II of reconstruction will bring the greenway up to current design standards, elevate problem areas to reduce stormwater impacts and construct 7 new bridges.

The Phase V portion of the project is a new greenway trail. Currently, sidewalks on West Dynasty Drive provide the connection between Phases II & III of the greenway. As I am sure everyone who has traversed this section of greenway is well aware, it has extremely steep grades that make it difficult for pedestrians and cyclists alike. The new Phase V section of greenway will eliminate the need for users of the trail to travel on the steep section of West Dynasty Drive and aligns the greenway access points directly across from each other.

The Crabtree and Black Creek Sewer Lines are two of our most important sewer lines in Cary serving a population of approximately 75,000. These sewer lines provide essential sewer service to areas of Northern Cary, Preston Area, RDU, and Morrisville and convey approximately 6-million gallons per day to our North Cary Water Reclamation Facility. These pipelines are extremely critical to our operations, and they too are in desperate need of rehabilitation and repair.

The planned rehabilitation approach includes innovative sewer lining methods, which can be installed much quicker and more efficiently than traditional dig and replace pipeline replacement methods (some pipes however may still need to be replaced). While it remains a lengthy process due to the challenging location of and access to the sewer pipes, we estimate this process to be 3 times faster than traditional pipeline replacement methods.

Sewer Rehabilitation using trenchless technology will help minimize the amount of time needed for greenway closures as the greenways are the contractors means of access. This process will ensure the sewer pipes are protected for the next +/-50 years.

All that being said, I can assure you that there has been significant consideration for the impact these projects will have on our citizens during the planning and design process. That doesn’t mean that it still doesn’t suck. It does. But there is no feasible way in which both projects can be completed at the same time as the contractors tasked with making the sewer system repairs must utilize the greenway(s) to access it – restricting use of the greenway and most certainly causing further damage to an otherwise aged trail.

Our professional Cary town staff have coordinated extensively for years to plan this work to ensure that only one greenway is out of service at a time and to most efficiently transition from sewer rehab to greenway renovation.  Several detour strategies have been and will be provided on our project webpage, https://carygreenwaydetour.com/.  Further, additional improvements are planned for bicycle accessibility along Norwell Boulevard near North Cary Park and a new grade separated crossing will be constructed underneath Weston Parkway providing access to Crabtree Creek Greenway.

That said we will pivot and adjust when we can and look to open access points and greenway segments whenever possible.

For the sewer rehabilitation work, we’re awaiting the contractor’s incremental staging plans – at that point we’ll have opportunities to comment and provide updates to best minimize impacts to residents.

Other emails from citizens this week included:

Next week is a holiday week. Activities for next week include staff meetings, bond signing, a podcast interview, a council work session, a regularly scheduled council meeting, and a meeting of the North Carolina Metro Mayors.

Well, that is all for this week. My next post will be on Sunday, September 12th. Although I have Facebook and Twitter accounts those are not the best means of communication with me.

Please send all Town of Cary questions or comments to Harold.Weinbrecht@townofcary.org and email personal comments to augustanat@mindspring.com.