Cary, NC — In February 2020, we reported on the Cary Town Council’s unanimous approval of a project that would bring two urban developments to Downtown Cary.

Now, we’ve caught up with a couple of lead developers and investors to get a closer look at what to expect from the project.

The two developments will bring apartments, office space and retail to the area and will wrap around and connect to the downtown public parking deck. This is adjacent to the Cary Regional Library at the corner of Kildaire Farm Road and Walnut Street.

The Walker – Apartments, Office and Retail 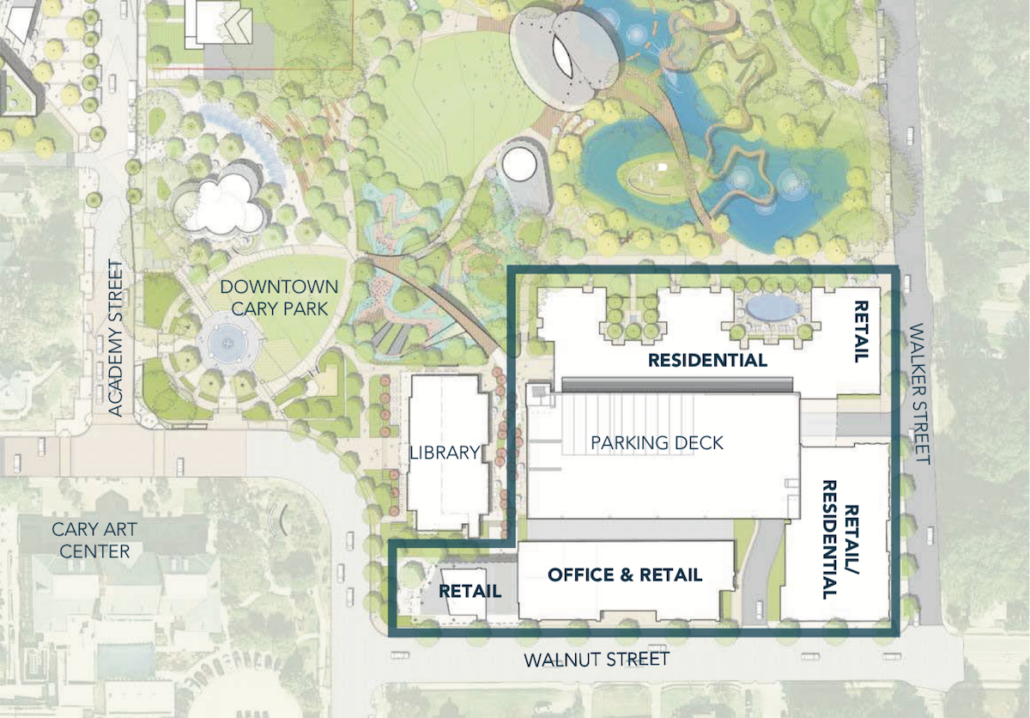 The first phase of developments currently under construction is known as the Residential Phase. This will include two buildings that will offer 153 apartments and approximately 16,000 square feet of retail on the ground-floor.

These predominantly residential components of The Walker development have a longer construction timeline of 20-22 months while the Commercial Phase that will bring the last building of office and retail is expected to require 12-15 months of construction.

The commercial office building with consist of 95,000-110,000 square feet of office and ground-floor retail space. This part of the project is currently in preleasing and construction is expected to begin in 2021.

Residential Phase Will Open in Early 2022 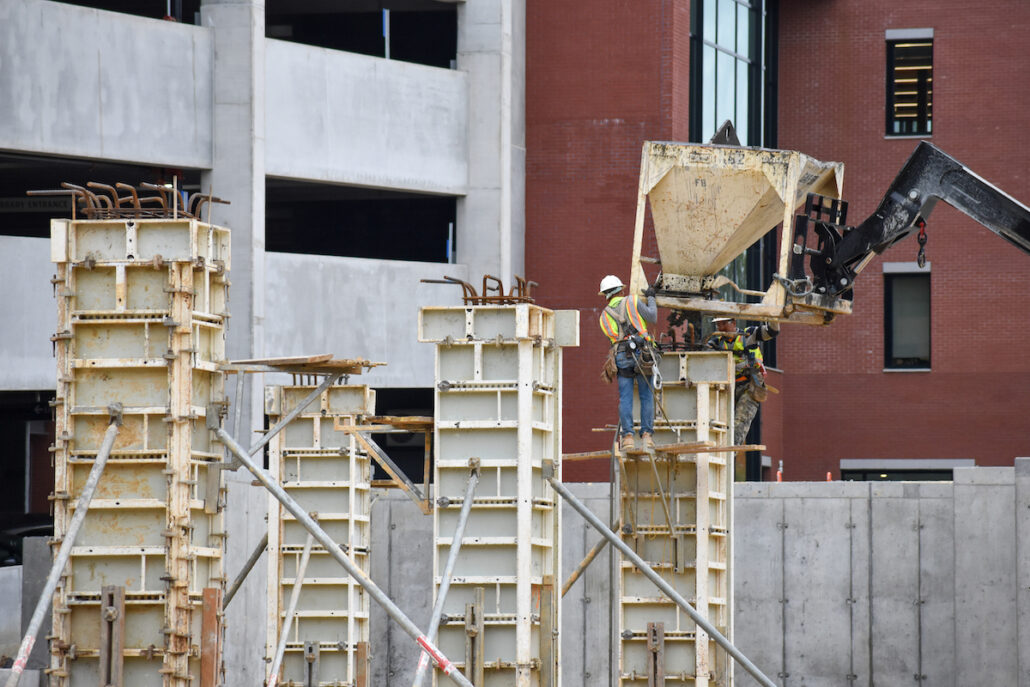 Cement columns for The Walker were being poured on Wednesday, November 25 as vertical construction of the apartment complex begins.

The projected opening of The Walker’s residential buildings is in the first quarter of 2022 with the opening of the commercial office building to follow.

This first opening will include all apartments, a restaurant alongside the Downtown Park and the retail shops along Walker Street.

“We are trying to have as little impact on traffic and the citizens of Downtown Cary as we possibly can, so if we have to stagger the openings a little farther apart to achieve that, we will,” said Bill Zahn, a lead developer of the project and investment partner with Triangle Real Estate Company.

Why Was Mixed-Use Chosen for the Site?

“Having the retail component and the office component drives the demand for residential and vice versa. The residential makes it convenient to walk to work for some people, go to the market or grab dinner at the restaurant,” said Zahn.

Another key player and investment partner, Grant Knier added that this sort of use will bring a higher level of energy to Downtown Cary.

“Cary has typically grown outward and we’ve had plenty of land, but as we run out of land, we have to rethink how we can create these interesting areas that help us enjoy Cary,” said Knier.

He added, “People want to feel the energy that comes from an urban environment. I think being able to bring that to Cary creates a unique feel where you have that but you also have a historic, small-town feel mixed together.” 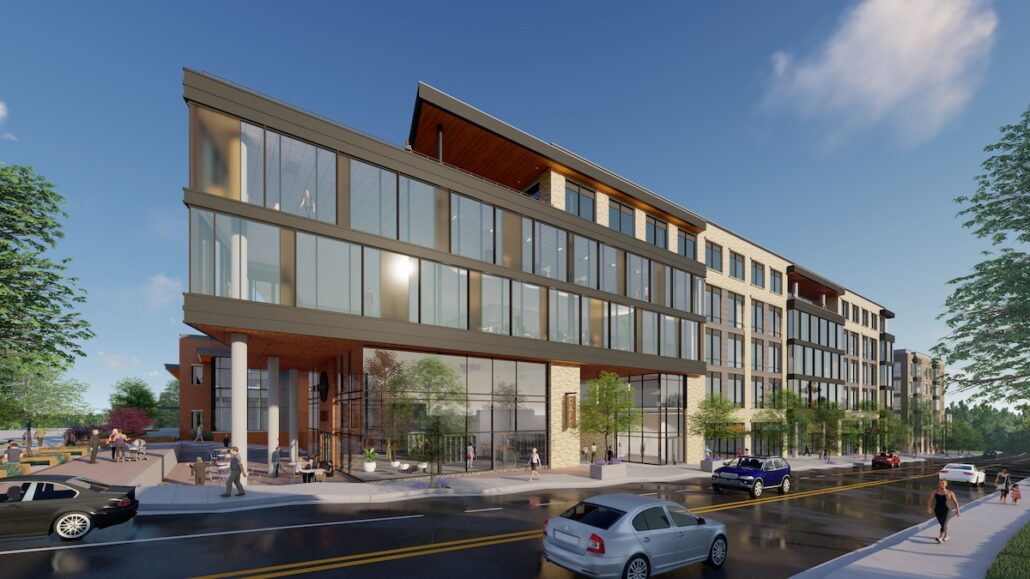 The commercial office development will run parallel with Walnut Street.

In speaking with Knier and Zahn, I asked what they hope the impression will be for citizens and visitors to Downtown Cary as they see it driving or walking in the area.

“As you drive up Kildaire Farm Road, all of a sudden you’ll see something totally different,” said Zahn. “We want people to know that they’ve arrived in downtown, but we also want it to still bring that authentic Cary feel.”

A big part of the impression will have to do with the sheer amount of people this development will bring to downtown. With this higher concentration of people living, shopping, dining and being downtown, Knier says “nothing attracts a crowd, like a crowd.”

“I think once this is up, Downtown Cary will have a little bit of everything. Small historic houses, a park, a boutique hotel, energy of the new development along with the coziness that comes with being downtown. Once all those things come together, I think we’re going to have something very special,” said Knier.

18 Months of Traffic Diversion for Construction

As construction takes off for The Walker, one lane of Walker Street is closed and traffic must divert around the site area where heavy machinery is being used.

“I think you can expect to see Walker Street in the condition it’s in now for about 18 months,” said Zahn.

Though this poses an inconvenience to some drivers, Knier said that there will always be a point of access for cars to utilize the public parking deck.

Additionally, at some point in the construction phase, Walker Street will have to briefly shut down so that the Town of Cary can run stormwater pipes across to the neighboring land that will be the big downtown park extension.

What Design Elements Will Stand Out? 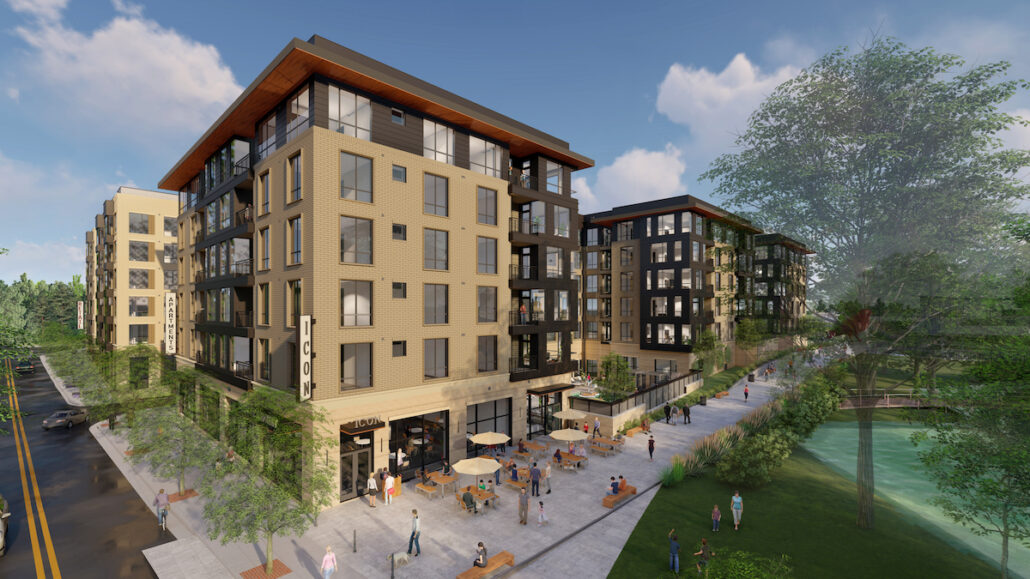 Renderings show a view of The Walker’s residential component as seen from Walker Street and the future expansion of the Downtown Park.

For Zahn, the thing he’s most looking forward to seeing come to life is the paneling that will be on the side of The Walker facing the park.

“Instead of just being a big, brick tower, there will be glass, traditional brick, metal and bronze paneling. It’s going to be a really unique and interesting look, said Zahn.

As for Knier, he’s ready to see the area that will be situated at the NE corner of The Walker that will create the transition or buffer area between the green space of the park and the urban building. This will take shape in the form of the commercial restaurant space and promenade located alongside the water feature of the park.

How is this Development Unique From Fenton & Carolina Yards?

With other urban, mixed-use developments of Fenton and Carolina Yards in the works just down Cary Towne Boulevard, Knier and Zahn say they do not necessarily see these as direct competition to One Walnut and The Walker.

“A rising tide raises all boats, so we’re very excited for what’s going on at Fenton and Carolina Yards,” said Zahn.

While the other projects will create some sort of competition for apartment, office and retail tenants, he says the bigger picture is that they will altogether make Cary more of a hub for people to live, eat, work and play in the area. Knier added that The Walker is going after a different feel than these other developments.

“This Downtown area is where Cary started and it’s been quiet for awhile and now it’s coming back. The historical nature and significance of it combined with the park will really resonate with people,” said Knier.

No Leasing Announcements Yet 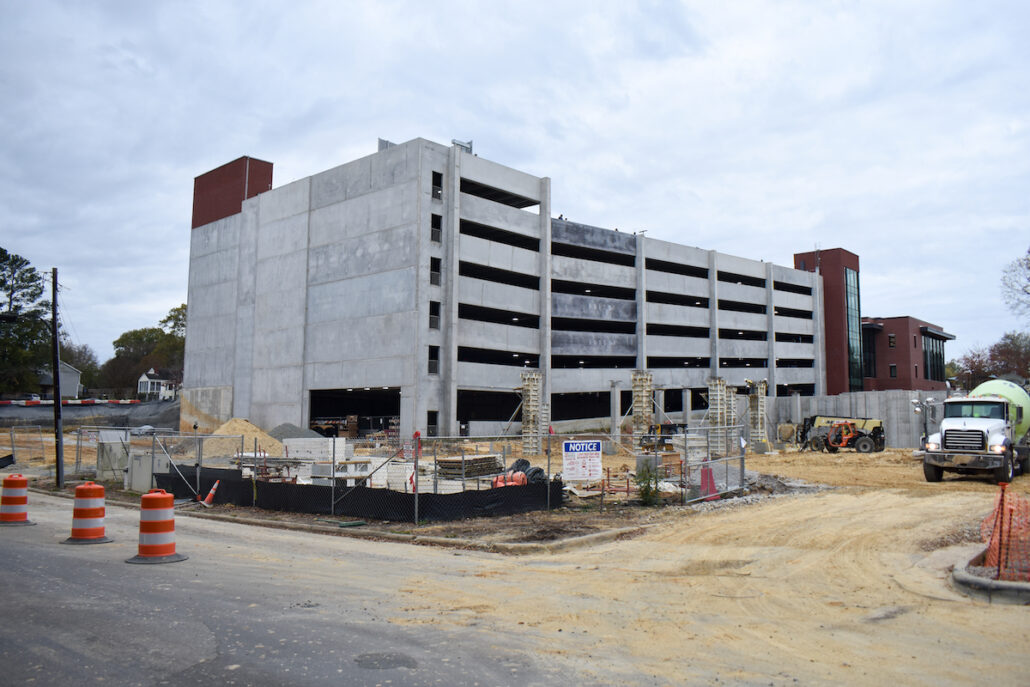 Knier and Zahn say no commercial tenants have been preleased as of yet, but they have several interested businesses.

In this area, in particular, the pandemic has created a whole new environment, leaving many companies more hesitant to sign onto leases long-term.

“People are hesitant to have a long-term commitment and we are looking for people in our development that are going to be long, sustained staples in this area, so it may take some time to find the right people,” said Knier.

Zahn added that they are looking for a particular mix of businesses that will foster to the downtown area well, so this will be a selective process.

The Companies & Families Behind the Development

The ownership team behind these urban additions to downtown are the Zahn family, the Knier family and the Stephenson family who have all been in Cary for 3-4 generations. These families are represented through the companies of Triangle Real Estate, Monument Property Group and Mackenan respectively, with a combined investment fund group called Integrated Asset Advisors.

Collectively, these families are making a $68 million private investment to see these developments come to fruition.

“All of us grew up here, live here and are raising our families here. We do care about the community and we’re talking about a significant change in Downtown Cary, so we want to do it right,” said Zahn.

The design phase for the project was quite extensive, spanning about 3 years of collaborating with leadership from the Town of Cary.

Knier added, “We want something that not only we think is nice, but the town is going to enjoy. We think the leadership within the town knows their constituents better than anyone so we took a lot of direction and a lot of input from them to produce something that they felt the citizens will enjoy.”

On the side of construction and design, the companies involved are Clancy & Theys, Cline Design and Withers & Ravenel. The leasing team is made up of Lee & Associates for the commercial space and Drucker & Falk for the apartments.

For a more detailed look at renderings, video and site plans for this development, take a look at the development’s website.