Cary, NC — The mall that has sat predominantly empty for years is soon to get an entirely new look and name. The mixed use development called, “Carolina Yards” is expected to break ground in early 2021.

This 87-acre project will bring a new mixture of retail, restaurant, hotel, office and residential spaces to Cary.

Carolina Yards has a team of 7 major companies bringing it to life. In the October Cary Chamber Economic Development meeting, a handful of experts from these stakeholder groups came together for an update on Carolina Yards.

Here’s a look at their vision and plans. 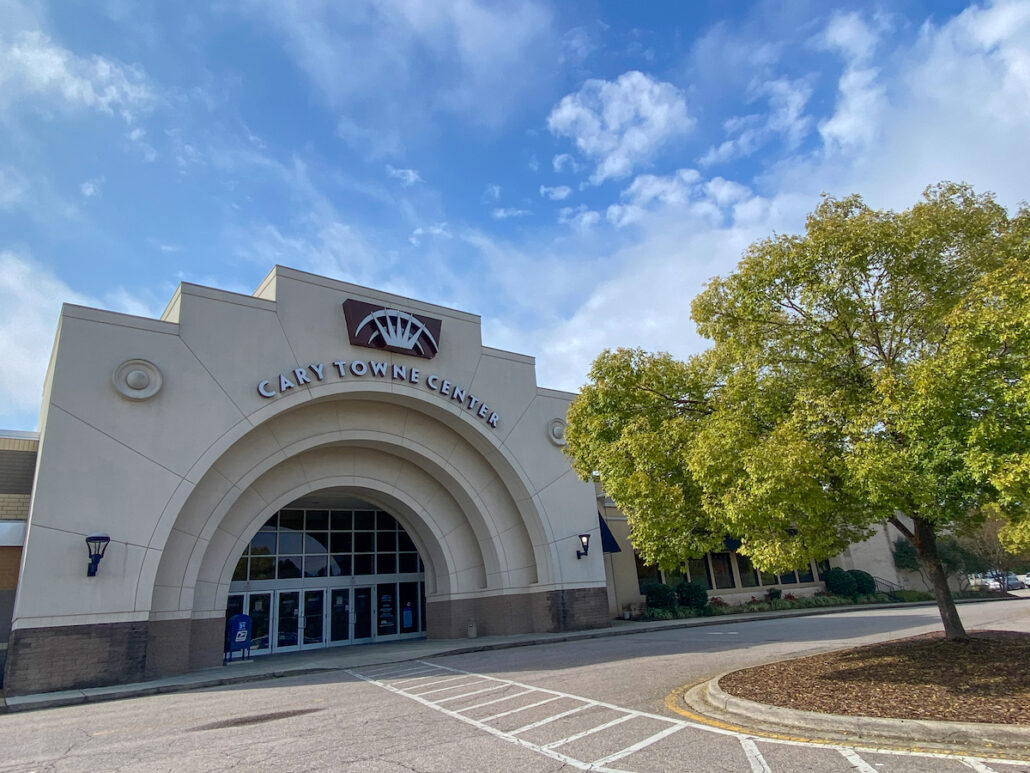 The mall known today as Cary Towne Center was built in 1979 and was last redeveloped in 1992. In January 2019, it was purchased for $31.5 million by Turnbridge Equities and Denali Properties. At the time of purchase, the mall was at roughly 60% occupancy and today it’s leased at 22%.

The year-long process to rezone the land got underway immediately and after planning with the Town of Cary, Carolina Yards was approved for 4.5 million square feet of mixed use space — a considerable leap from the mall property’s 980,000 square feet.

Jason Davis, Managing Director of Turnbridge Equities, summed up the property as a “distressed mall” that has seen a number of its anchors close their doors.

“We’ve seen dramatic changes in the way retail works throughout the country and especially here in the Triangle. I think at one time it had 8 or 9 malls and we’re seeing that consolidation into just a few of the leaders,” said Davis.

CEO of Denali Properties, Adam Williams, says the team is “focused on improving properties that have the ingredients to become something special and better serve their community than maybe they did in the past.”

A Look Inside the Site Plan 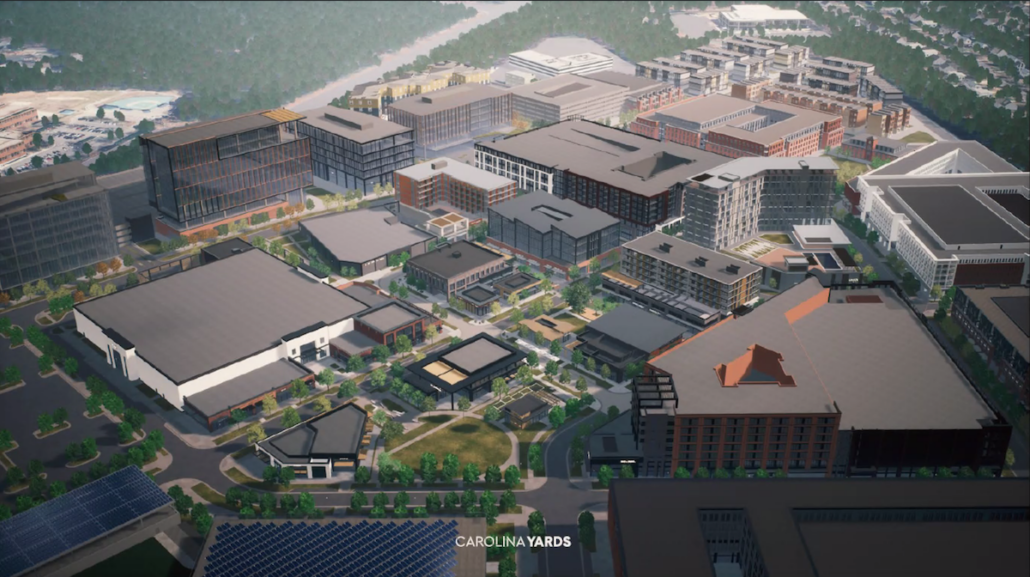 The new development, as described by Davis, will provide a new, walkable district in the heart of the triangle. It’s intended to be a day to night destination with landscaped parks, plazas and public spaces, with pedestrian friendly, grided streets.

“Carolina Yards is meant to be a place where people come on a daily basis. It is an open and inclusive place for all people, all generations and all ages,” said Davis.

At full-buildout, Carolina Yards will include:

What’s to Come in Retail 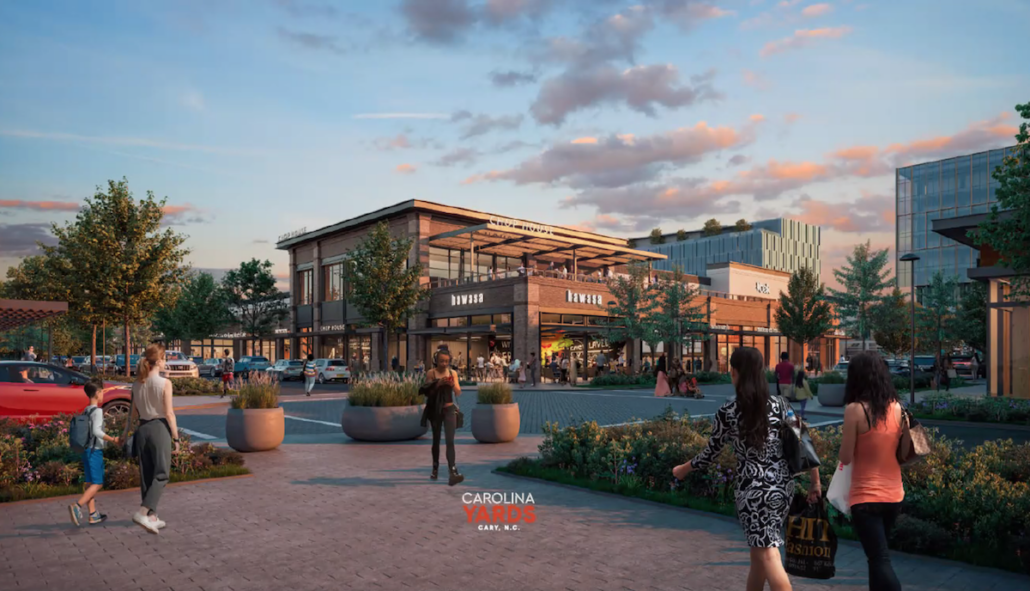 Retail offerings at Carolina Yards will be spread throughout the property across six of the project’s subdistricts: Central Square, Main Street, Market Plaza, Brewer’s Alley, Piedmont Promenade and the Civic Green.

Piedmont Promenade, for one example, will be a pedestrianized, European-style street extending north to south. It will be lined with stores and will feature outdoor dining and fire pits with communal and smaller seating areas.

In a Q&A session, Davis said the COVID-19 pandemic has allowed the design teams to be thoughtful about certain changes like a focus on outdoor spaces, pop-up markets and outdoor dining. This includes thinking about the popularity of curbside pickup for restaurants and making space for those customers.

The lone surviving store of the Cary Towne Mall will be Belk, though it is in for a full renovation.

“They’re a local brand with a lot of generational ties to the Carolinas, so we’re excited to include them as a part of the project. They will stay and the rest of the mall will be demolished,” said Davis

The renovations to Belk will begin in 2021 and will include new parking, new facade, new storefronts and integration into the other property designs. The interior will also get revamped and will go through remerchandising to create a higher-quality experience.

“It will be unrecognizable compared with what is there today,” said Davis.

A design rendering from the Town of Cary for the Cary Sports and Recreation Center complex, located on the western side of the Carolina Yards footprint.

The athletic angle to the project is a $250 million facility that would ideally host 150,000 tournament participants and families each year. The events at this center are projected to bring in over 50,000 nights spent at hotels annually as well.

This center, funded by the Town of Cary would add to the nearby athletic spaces of the Triangle Aquatic Center and WakeMed Soccer Park. The funds have been awarded to Cary from Wake County’s restaurant and hotel taxes.

According to Davis, this center will serve as a hub and demand-driver for Carolina Yards.

The Offices at Carolina Yards 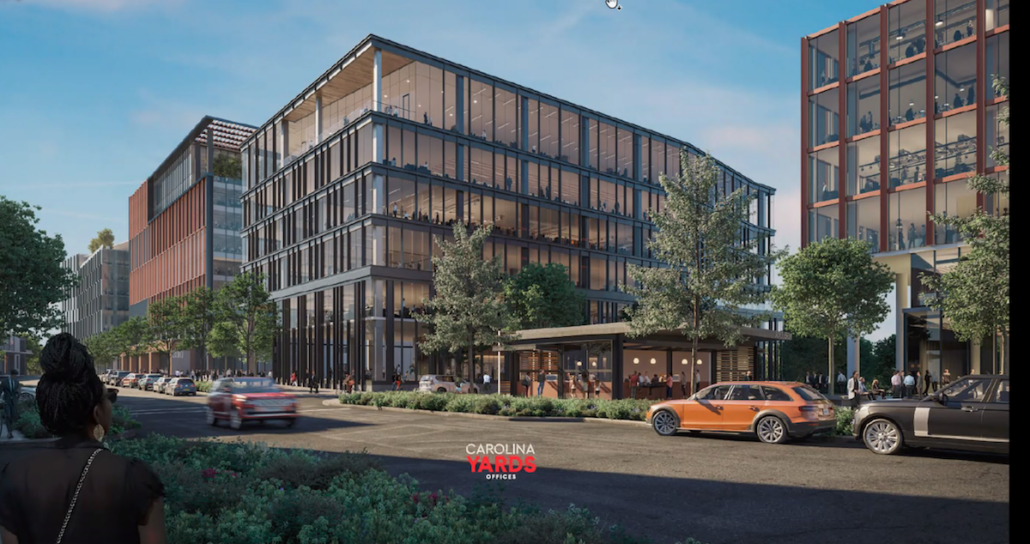 Rendering shows four of the five total office buildings, located on the northern side of the project’s footprint.

The estimated 1.2 million square feet of office space will be spread out between seven class-A buildings, each with walkable access to structured parking decks. The floor plans for each tenant range from 20,000 – 30,000 square feet with 4 parking spaces provided per 1,000 square feet.

“This is going to be unlike any other suburban office project in the Triangle,” said Brad Corsmeier, Executive VP, specializing in Investor Leasing at CBRE in Raleigh.

The offices will include outdoor spaces, balconies, 10-foot ceilings and abundant glass lines. All buildings are positioned on the outskirts of the property with access to Cary Towne Boulevard for connections to I-40 and US-1.

“We really believe that this is something our market has never seen and it’s really going to set it on fire,” said Ed Pulliam, Executive Vice President of asset services for CBRE.

Residential & Hospitality at the Yards 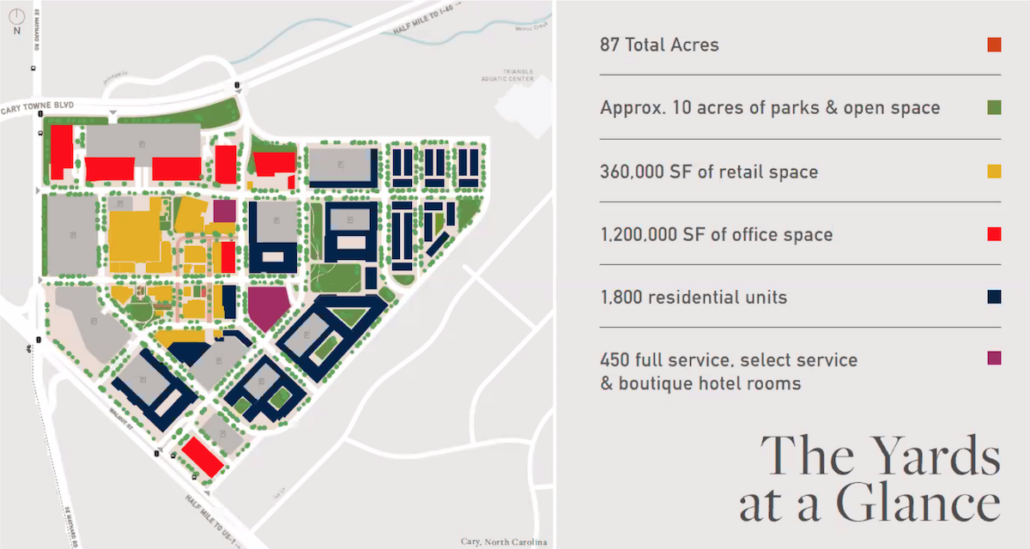 “There’s something for everyone whether it’s a town home, a studio apartment or a more luxurious, larger unit — we’ll have it,” said Williams.

Primarily on its eastern and southern sides, Carolina Yards will host 1,800 units in a variety of sizes and finishes along with 450 hotel rooms. Many units will have balconies, private outdoor spaces, courtyards and roof decks. 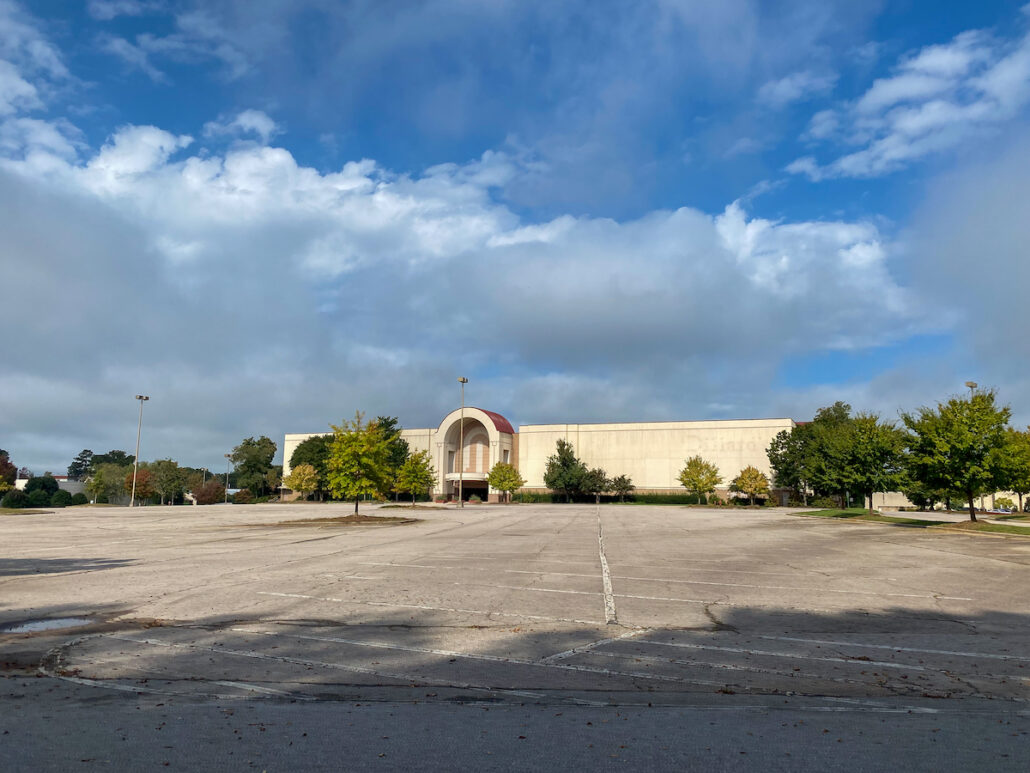 “Between your work and the work of your teammates across the street at the Fenton, our eastern gateway is just going to be phenomenal.”

The project, like others of such magnitude, will be completed in phases, with the first set to begin with a groundbreaking next year. The first phase will include demolition of the mall and the creation of the “urban village” of the project, including retail components, 450 residential units and 2-3 hotels.

“We are very excited to be breaking ground on the project very early in 2021 after the remaining retailers in the mall get through the holiday season,” said Davis.