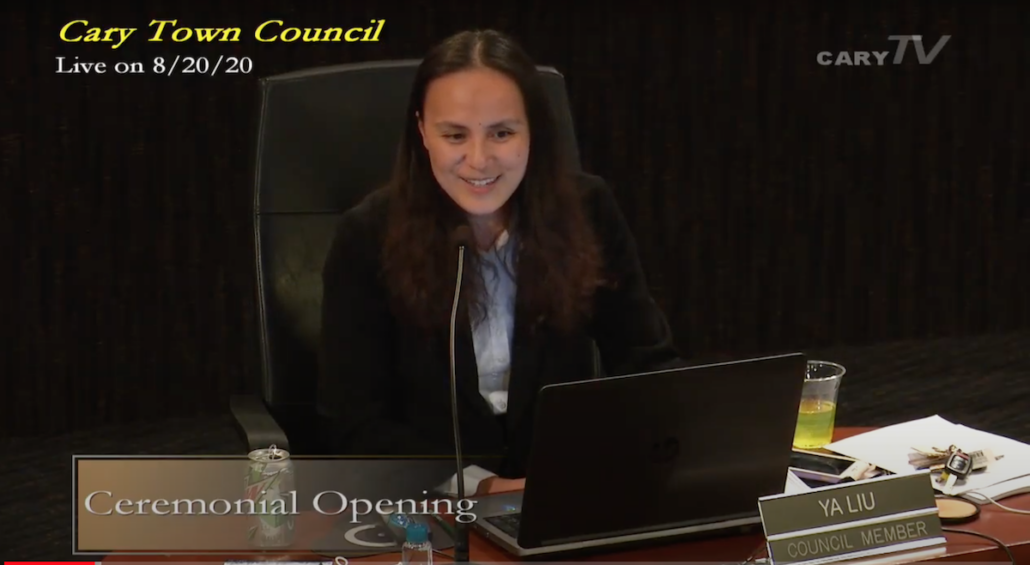 Councilwoman Ya Liu opened the meeting with a tip of the hat to the centennial anniversary of the 19th Amendment. Its ratification 100 years ago granted all women the constitutional right to vote in the U.S.

“As November approaches us, I encourage all citizens to vote, regardless of your party affiliation, out of respect for those that came before us and did not have the right to vote,” said Liu.

This program was designed to help residents, owners and rental property managers keep drugs and other illegal activity off their property. During these times, Cary Police have been distributing free masks. This month alone, 3,000 have been passed out to five apartment communities and a Cary mobile home park.

Stegall shared a note of gratitude from one of the citizens who received a free mask and reminded meeting attendees that free masks are available at all Cary fire stations or by contacting 3-1-1.

An aerial map shows the parcel in question along with a preliminary blueprint of the bank development.

A rezoning case known as Cornerstone Mixed Use Plan Amendment Rezoning was presented to council. The request is for a 1.8 acre parcel at the intersection of High House Road and Magness Drive.

The applicant is wanting the land use to change from its current Residential 40 status to Mixed Use District with a Preliminary Development Plan proposing a bank, up to 3,500 square feet in size with a drive-through area and a separate drive-up ATM.

This land is an undeveloped outparcel of the adjacent Bradford development. Building standards from the PDP include:

Representative of the applicant, Nil Ghosh said, “With the COVID crisis, banks have seen a sharp increase in drive-thru utilization. In fact, the Wall Street Journal dubbed this phenomenon ‘the bank drive-thru COVID comeback.'”

In this case, the planned drive-thru would accommodate a kiosk and not a teller. According to Ghosh, this will allow banking access after regular hours and additional convenience.

No comments were submitted by the public, though Mayor Pro-Ten Don Frantz spoke up to say, “I have no concerns with the use, I just don’t understand why we’re still turning the back of buildings facing the street. I just, I struggle with that.”

Also agreeing to his thought were council members Jennifer Robinson and Lori Bush, who hope to see an adjusted design with storefront facing High House or Magness.

Amendments Made to Fenton Development Plan 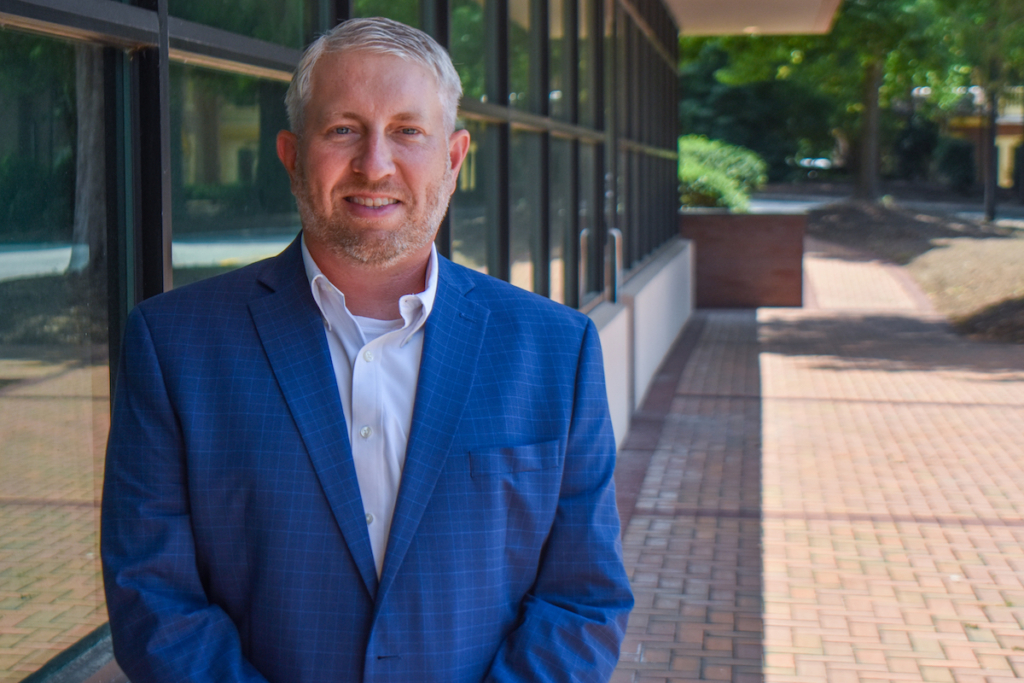 “A search for building financing has led the master developer to determine that several changes to the development agreement would be beneficial to he success of the project,” said Overton. “In general, the proposed amendments seek to provide more rights to investors and lenders in the Fenton project to protect their investment.”

The changes to the development plan in this area would simplify the process to approve ancillary developers—the developers outside of the master developer which may bring a hotel or office building to Fenton.
The added verbiage would also provide additional protections for lenders and investors to protect their investments if the master developer or an ancillary developer defaults on its obligations to the Town or it’s lenders

Overton said, “In a worst-case scenario, Fenton could be controlled by these lenders rather than the master developer, however, even in this scenario, Fenton must still be developed in compliance with the zoning PDP and the design guidebook.” 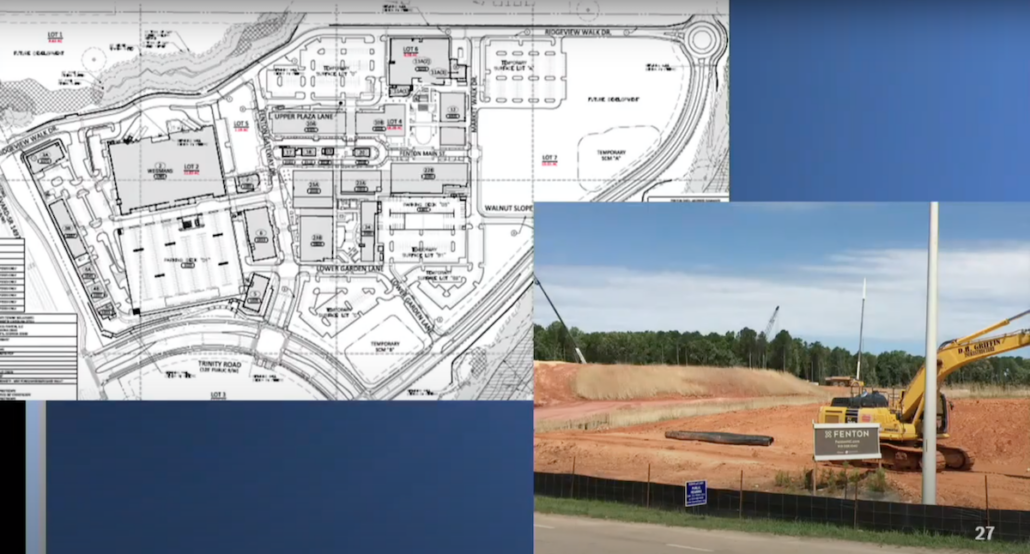 The master developer has requested an adjusted time frame for the development of the Quinard Road, Sloan Drive and Maynard Road intersection due to design complexities.

In addition, the developer wants to construct their greenway plan in two phases to be more environmentally prudent. It’s also anticipated that building 8 on the plan, intended to be a hotel, will be delayed.

In the category of parking, the developer is exploring options to build and expanded parking deck D3 in lieu of building 9.

Total reimbursements would in exchange be reduced by 5% until these sites are constructed.

The third request from the developer is to change the list of fees estimated during the time of rezoning to now reflect actual construction numbers. This amendment does not change the $5.5. million cap on reimbursements from the Town.

Overall, Overton said the amended agreement has no direct fiscal impact to the Town beyond what was initially agreed to by the council in 2018.

With no public calling in or submitting comments, the council moved to approve unanimously. 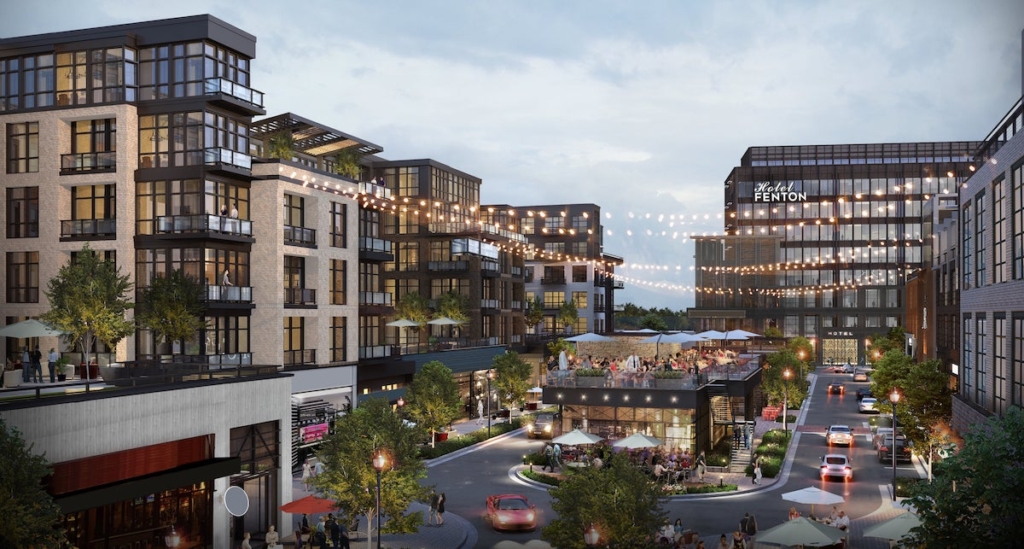 While the above changes are being made to the Fenton project’s Development Agreement, there are also proposed changes to the Development Plan and more particularly, the zoning conditions on the site.

In the council’s June 25, 2020 meeting, these additional changes were first proposed to them. The detailed overview can be found in CaryCitizen’s coverage of that meeting, but in short, those changes are:

These changes were deferred to the Planning and Zoning Board in June before returning this week for a final decision. The vote was unanimously in favor of allowing these changes.

The meeting lasted about 45 minutes with a 25 minute closed session.

The next regular meeting of the Cary Town Council is scheduled for Thursday, September 10 at 6:30 PM. These are available on CaryTV, through livestream on the Town’s YouTube account and are posted afterward to the Town’s meeting portal.