To sum up the comments from councilmembers on the budget, no one loved it but all had their reasons for supporting it.

Cary’s Chief Financial Officer Karen Mills summarized the budget in the June 11, 2020 Town Council meeting. The recommended budget is for a total of $427.6 million for operating costs and expenditures, a 8.6% increase from the prior year.

Due to revenue shortfalls in the millions, Cary’s finance team had an uphill battle to put together a budget. For many municipalities, including Cary, this meant instituting a tax rate increase. The Town decided on a 5-cent increase from a rate of $0.30 to $0.35 per $100 in value. Even with the 5-cent increase, Cary ranks as the lowest municipal tax rate in Wake County.

Other budget recommendations include:

In last night’s meeting the budget was proposed with one adjustment to the original — a 4% cut in the Town’s utility rate.

“I’m confident that doing this will have no substantive impact on the utility’s financial position while also offering our residents and businesses some relief during these unprecedented times,” said Town Manager, Sean Stegall. This decrease in costs for residents would generate $2.6 million less in Town service charges. To counteract this, $2.6 million from the Town’s utility fund reserves would be allocated.

This results in the same total recommended budget of $427.6 million.

Following presentations, discussion and public comments, the council unanimously moved forward with the proposed budget. Several councilmembers said they look forward to revisiting it and adjusting each quarter as needed. According to Mills, almost everything but the tax rate itself has the flexibility to be reconsidered and amended at any official council meeting.

Note: For anyone wishing to make their input on the budget known, all comments are welcome throughout the year through the Town’s Facebook and Twitter using #TOCBudget, by email, by voicemail at (919)469-4307 and any Public Speaks Out session of the Town Council meetings. 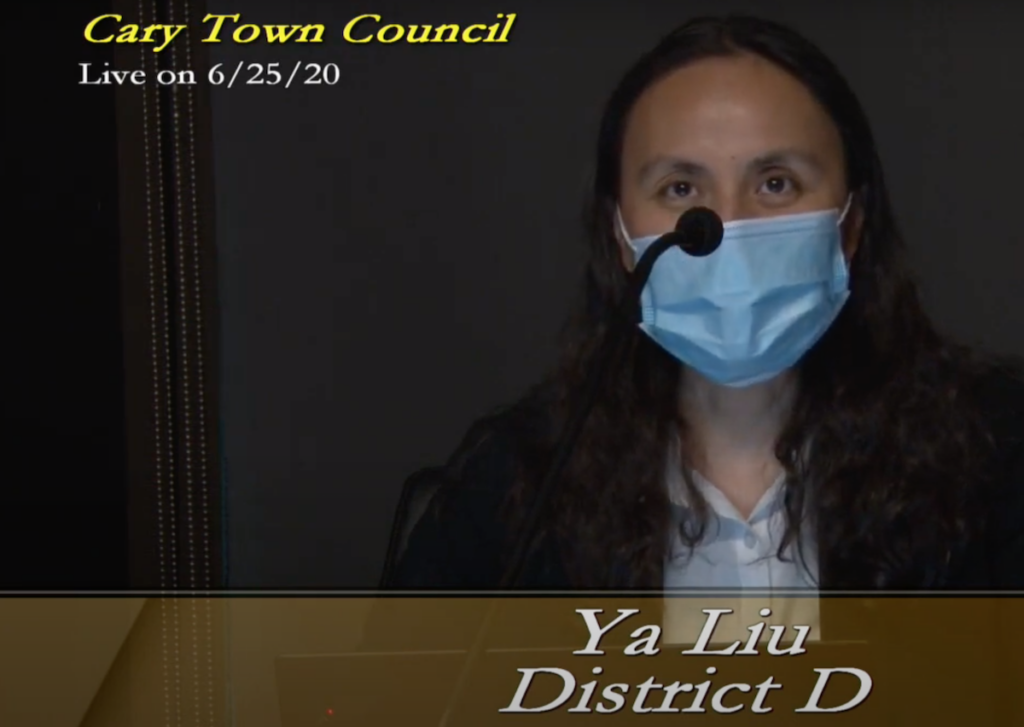 This was a very out of the ordinary first-time budget process for the newest councilmember, Ya Liu.

“As a citizen, I recognize this is a very challenging time and I applaud the staff’s efforts to come up with the decisions and budget that not only allow us to hold steady, but also allow Cary to look to the future and build a Cary that we all love,” said councilwoman Liu.

Mayor Pro-Tem Don Frantz approached his comments as ‘the good news’ and ‘the bad news’. The good being that he found the budget to successfully fund the community’s vision and expectations.

“The bad news is the tax increase. It’s not like anyone saw this pandemic coming,” said Frantz. “In the 13 years I’ve been sitting up here, this is hands-down the most difficult budget process I can ever remember.”

As recently as early March 2020, Frantz recalls the council and staff being pleased with revenues and did not plan for a tax increase even with the planned bond projects.

Councilmembers Ed Yerha and Jack Smith were in agreement in their comments that they don’t entirely love the budget, but that they both look forward to having the ability to make adjustments as the year goes on. Smith even joked that some aspects of the budget come with a level of heartburn for the councilmembers.

“One of the things that makes this tough is the things not in the budget and that’s the absence of salary increases for our world-class staff. It’s the first time in recent memory that this has been the case,” said Yerha.

Councilwoman Jennifer Robinson took a moment to share that online comments have pointed to the conclusion that all governments who increase taxes are bloated governments. To this, she said, “People who say that really don’t know Cary and don’t know that where we are today is the result of decades of very cautious budgeting practices. If not for those practices and for the fine management and efficient use of our resources, our taxes would be a lot higher right now.”

As the budget makes priorities on the continuation of bond-funded projects, Robinson answered the question as to why they are continuing with those in such a tumultuous time.

“I think it’s because people who are successful think counter-intuitively and while a lot of people are trying to hunker down and not do anything, the Town of Cary is moving forward with projects, providing employment to people who need jobs and we’re going to probably have lower construction budgets than we would have in good time,” said Robinson. Robinson continued to say,

“I think that in the end, the citizens of Cary are going to win by having us move forward with these projects, not just because it keeps improving the quality of Cary, but because we’re doing things to help our economy and also leverage these great rates we expect to see.”

Her and councilwoman Lori Bush agreed that even with a tax increase, Cary remains a great value to citizens. Following a unanimous vote of approval from all seven councilmembers, Mayor Harold Weinbrecht said, “I’m very proud of this council.”

Note: To hear more from the council and the public input, view the full meeting.

Fenton Amendments to be Considered by P&Z Board 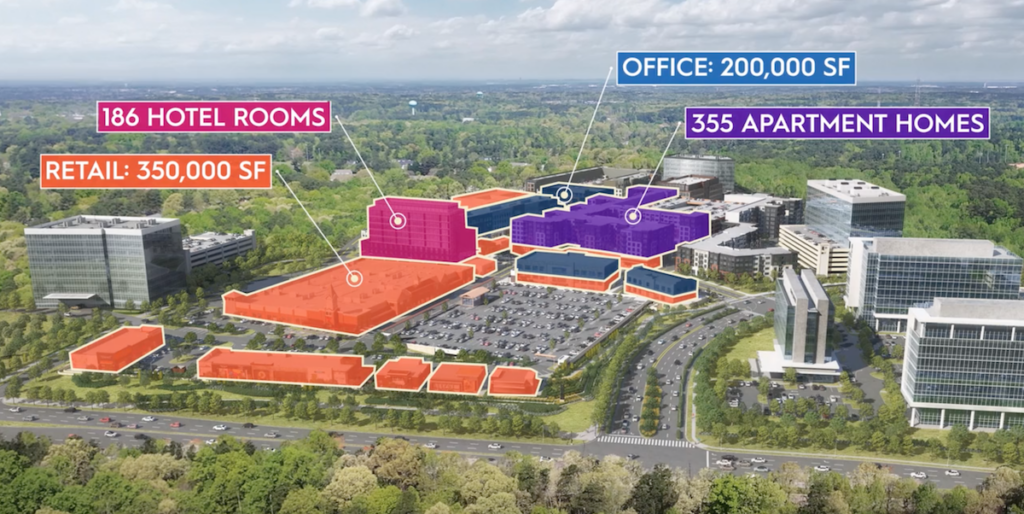 Another rather lengthy topic of discussion from the meeting was a request from the developer of the 92-acre Fenton Mixed-Use Development to have the Town consider amendments to its preliminary development plan.

Things remaining the same would include:

Assistant Planning Director, Debra Grannan presented comments from nearby residents of the project which included cornerns of building heights, lighting, buffers and traffic. The applicant representing the Fenton, Abbitt Goodwin, called into the meeting to share further updates.

“We’re well on the way and despite the challenging economic and social times, I’d like to report success as it relates to the Fenton,” said Goodwin.

Of the more than 1 million square feet of retail, office and multi-family residence space, Goodwin reports that more than 65% is leased for the retail square footage in this first phase.

“We’re extraordinarily excited about where we are with the project,” said Goodwin. “The changes we’ve requested tonight will generally promote operational superiority and programmatic flexibility and we believe that we’ve market tested this enough at this point that we know what it needs.”

In discussion, the comments centered around eye-sore-like issues that might come with looking out a maximum 12-story building with a view looking down on the large, flat rooftop of a grocery store.

“I have a regret that we did not consider what the viewshed was going to look like from these buildings, especially when you get into these 12-story buildings which we didn’t anticipate. A roof-top of a grocery store is one of the most ugly sights there is,” said councilwoman Robinson.

The recommended amendment moves on to reviewed by the Planning and Zoning Board before returning for a final decision in an upcoming council meeting.

Cary’s Economic Director, Ted Boyd said the proposed amendments to both of these two major compasses for Cary development serve the purpose of “continuing the vision of a vibrant, urban and walkable downtown.”

First adopted to the Land Development Ordinance in 2003, the Cottage Business & Residential Subdistrict became a way for older homes in the downtown area to be repurposed into low-impact businesses. In creating this allowance, Grannan said the intent was to retain character in the downtown district.

“What we’ve seen recently is a much higher occurrence of subdivisions in existing residential lots and building 2 or 3 new homes. This does help the high demand for housing in downtown Cary, but it also made us realize that the ordinance we adopted back in 2003 did not fully anticipate this type of development,” said Grannan.

To put more dimensional rules around these types of development, Town staff proposes to include required standards of minimum lot sizes and required footage for side, rear and roadway setbacks. This would affect three certain property districts on Chapel Hill Road, Harrison Avenue and South Walker Street. 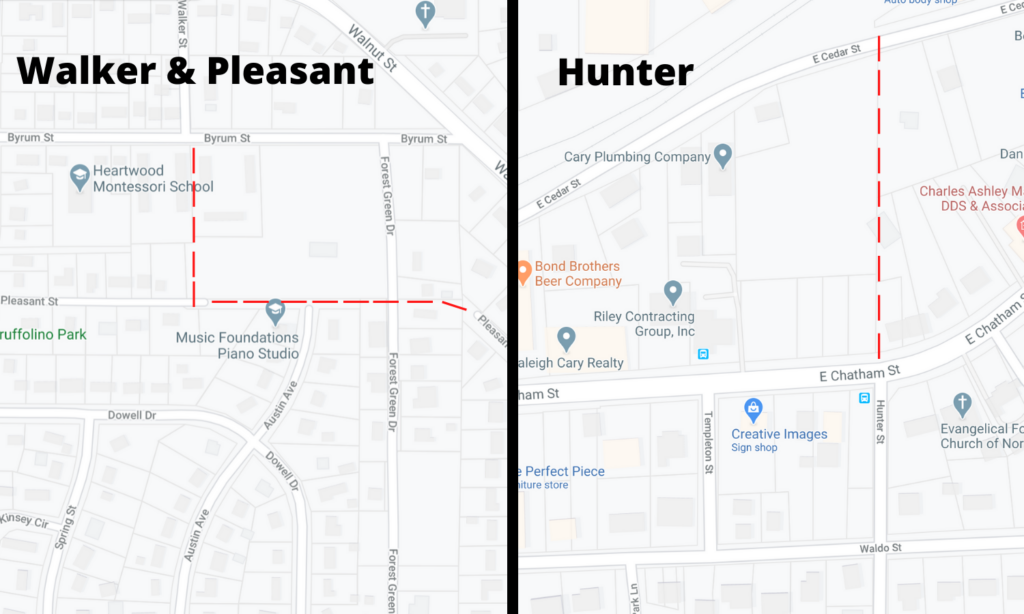 For ease of navigation, staff proposes the Town make adjustments to the Cary Community Plan, including the addition of three connector streets to “fill the gaps” in the downtown grid network. This would include South Walker Street, Pleasant Street and Hunter Street. In this same edit of the Plan, they would remove the Walker Street Extension Project and also clarify policies supporting multi-modal street designs.

Grannan says the overall goal of this amendment is to foster a more pedestrian and urban style downtown area.

The first of two call-in commenters was a downtown cottage business owner, Keith Bliss who mainly wanted to understand who initiated these changes and why?

“The concern overall for the property owners, 75 lots in total, is that it’s going to likely have a very negative impact on property values within each of the three subdistricts,” said Bliss.

A second caller, Tony Sample, has been a property owner on S. Harrison Ave. since 1986. His primary concerns lie in the restrictions and he said, “We’d like to see this proceed on in a cautious and fair manner.” Following the public hearing, the topic moves on to the Planning and Zoning Board for an action recommendation. 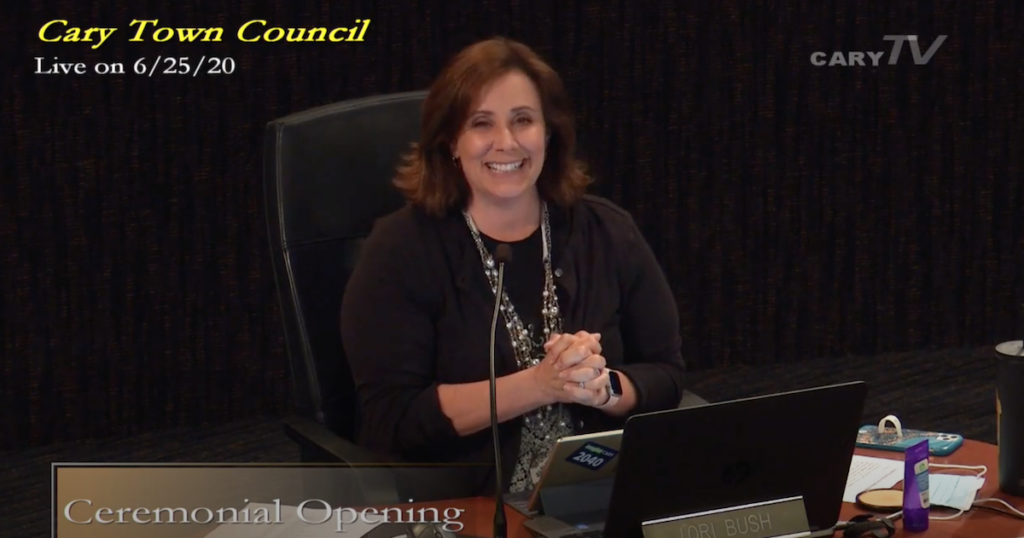 At the start of the meeting, Councilwoman Lori Bush shared a few word on the Town’s recognition of Pride Month.

“I want our young people to know that, regardless of sexual orientation or gender identity, that they should feel valued, empowered, safe and supported in our community,” said Bush.

The council met for a 53-minute closed session with adjournment at 9:12 PM.

All Cary Town Council meeting dates and agendas can be found on the Town’s meeting portal.

Story by Ashley Kairis. Images were screen captured from the virtual meeting.