Cary, NC — In their first meeting since June 25, the Cary Town Council heard the economic impacts of the pandemic on Cary, endorsed the creation of the Western Corridor for Wake Bus Rapid Transit and approved a permanent right-of-way closure. 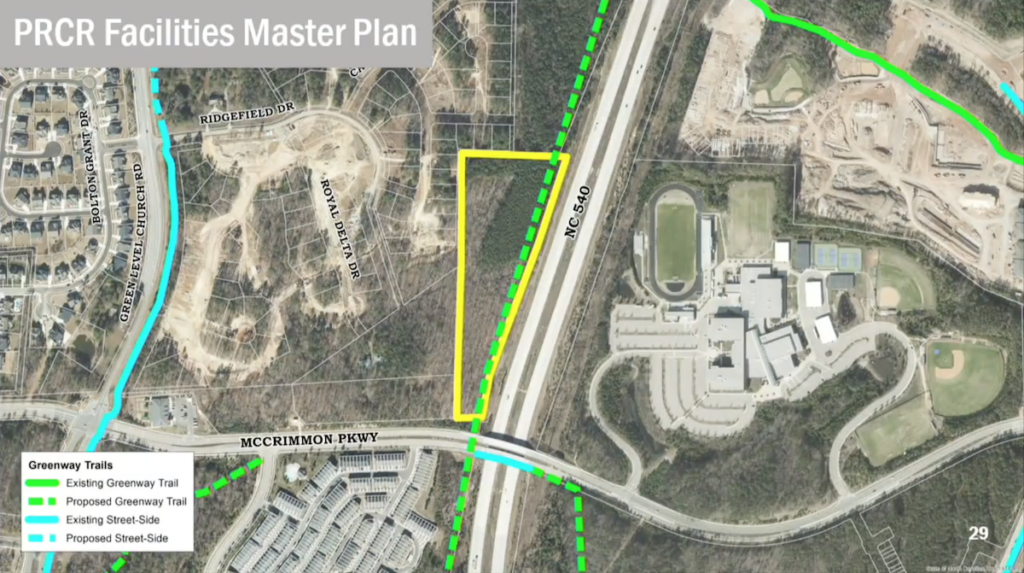 Easily the most discussed item of the evening was the request to amend the Cary Park Planned Development District to allow for 15 homes to be constructed on 9.56 acres of previously dedicated as undisturbed natural space. This land is located at the NW corner of NC-540 and McCrimmon Parkway, just west of Panther Creek High School.

Years ago when the Town first entered into agreements to create the Cary Park subdivision, there were a lot of negotiations with the developer. In these negotiations, Councilmember Jennifer Robinson says in exchange for releasing the developer from the requirement of construction a sidewalk along Yates Store Road, the developer would dedicate an area of open space.

The land was sold in 2018 to a private owner who now is approaching the council with a request to rezone this 9.56-acre piece of land. The plan brought to the council is for 15 detached residential units with minimum lot sizes of 8,000 square feet, a 20-foot buffer along its western boundary and 100-foot buffer on the side facing NC-540. The plan would intend to keep 2,500 square feet of the 9.56 acres as community gathering space.

According to Cary’s Assistant Planning Director, there is also a future greenway trail intended to go through the eastern edge of the property. The developer would be responsible for providing an easement for this section of the greenway, but would not be required to commit to its construction.

In early March, 14 neighbors in the area attended a meeting to express concerns of lot sizes, the preservation of trees and buffer space between their homes and NC-540, noise from the highway and whether or not a greenway connection would come to fruition.

A representative of the buyer, Glenda Topp, said, “It is our opinion that area residents will benefit because the 100 foot-wide highway corridor buffer will remain and the greenway will be dedicated which will allow the property to finally fulfill its original purpose as meaningful, usable open space.”

In a nutshell, the Council members and public hearing speakers couldn’t have disagreed more.

A total of 18 commenters spoke against the proposal and reminded the council that many homeowners in that area bought their houses with the understanding that the green space would remain undisturbed. 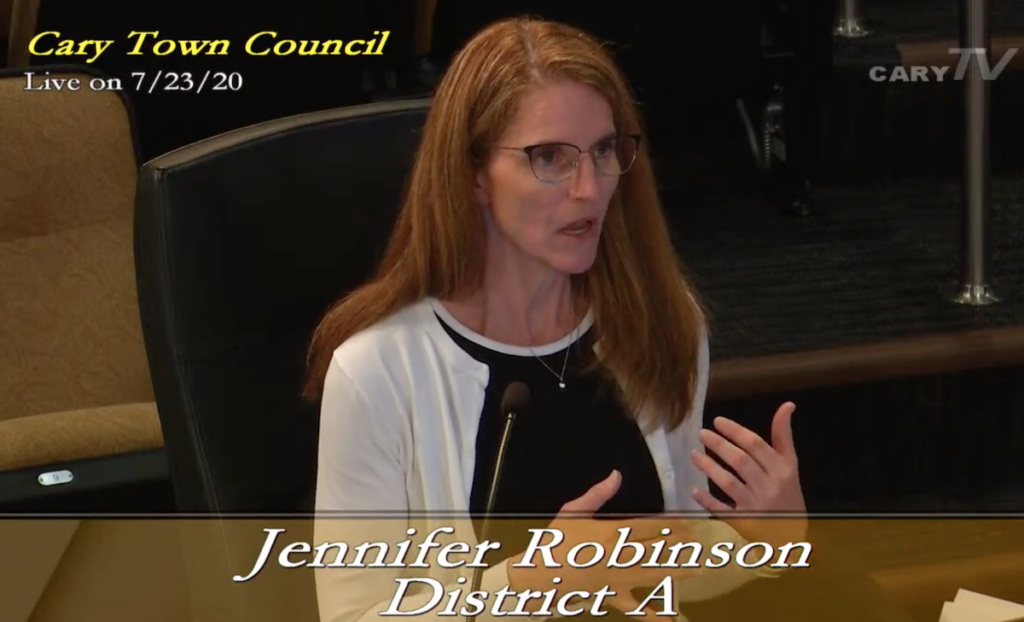 The first and most adamant councilmember to speak on the issue was Councilmember Robinson.

“It’s disingenuous for this land to have been sold and not donated to the HOA as it should have been,” said Robinson. “I believe that whoever sold this land was wrong in doing so and really duped an unsuspecting buyer.”

With empathy expressed to the buyer/applicant in the case, Robinson said, “Taking away open space that has been already designated, that’s completely wrong for our citizens.” She further said, “I would never vote for this.”

Councilmember Lori Bush agreed, adding that if she had the power, she’d stop the application in its tracks and not send it on to the review process by the Planning and Zoning Board. In fact, she suggested the applicant withdraw altogether to avoid wasting time of staff and citizens.

“Losing already designated open space in favor of 15 houses in an area where houses are not in short supply is not on my to-do list,” said Yerha.

Mayor Harold Weinbrecht seemed taken aback by all the comments as usually there is some sense of open-mindedness on rezonings. He said everyone’s comments just go to show how “seriously defifcient” the proposal is.

Unless withdrawn by the applicant, the matter moves onto the P&Z board and back to council for action at a later meeting.

The Future of Public Transit in Cary 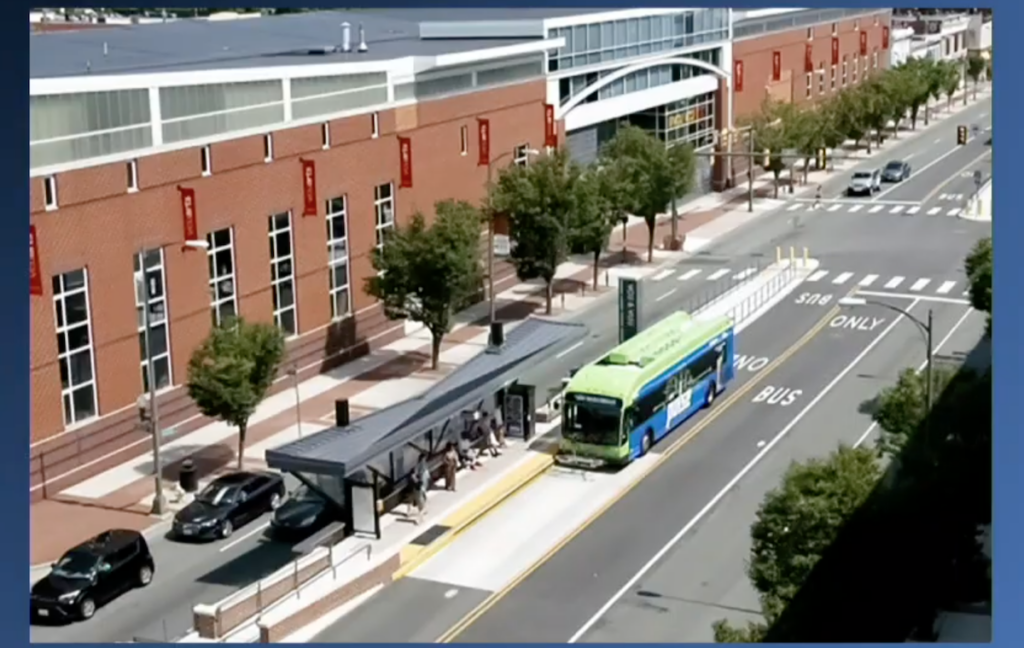 Bus Rapid Transit is a high-frequency transit service that utilizes dedicated bus lanes for bypassing traffic and eliminating travel delays. This service is in the planning stage to come to Cary by way of a western corridor which will stretch from downtown Raleigh to downtown Cary.

According to Cary’s Transit Administrator, Kelly Blazey, this project would have no financial impact to the Town as it would be funded through grants from the Federal Transit Administration. The preferred route that was approved by the councilwill run from downtown Raleigh via Western Boulevard then take Cary Towne Boulevard to SE Maynard Road to E. Chatham Street which would lead to the Cary terminal near Harrison Ave. and the NCRR rail lines.

This route would take passengers by developments such as Fenton, the Cary Towne Center and the Triangle Aquatic Center.

Councilmember Liu asked Blazey for a timeline of the project. She said their projections are for construction to begin by 2024 and completion and beginning of service by 2027. Frantz commented in favor of the route but joined Robinson in expressing concerns with adding a bus lane to the section of E. Chatham Street as it nears Walker Street.

The council unanimously endorsed the project which will allow the project to head into its design phase and become eligible for federal funding.

Fiscal Impacts of COVID-19 in Cary 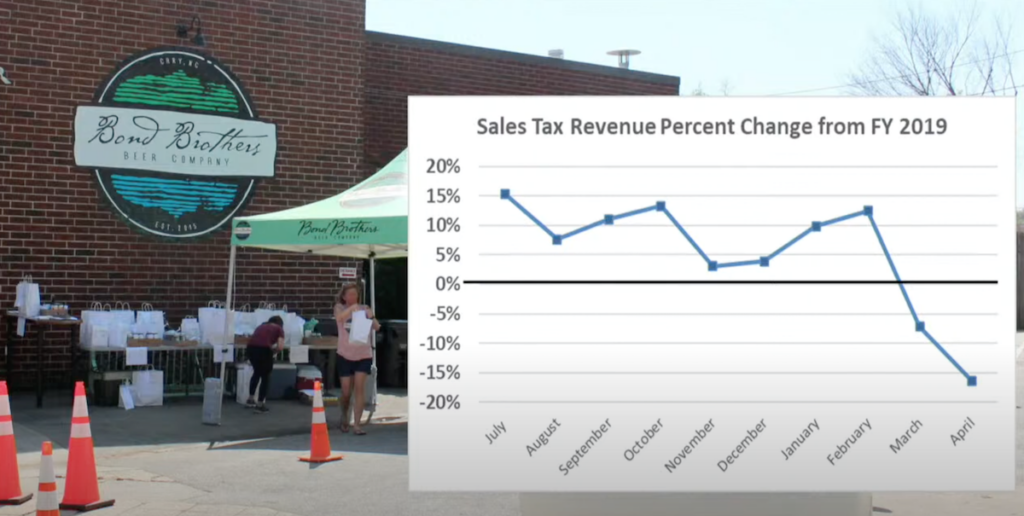 In the Council’s June 25 meeting, they approved the Fiscal Year 2021 budget which took effect on July 1, 2020. Chief Financial Officer, Karen Mills, said it was one of the Town’s most challenging years to project revenues and expenditures due to the uncertainties of planning in a pandemic.

By request of the council, Mills returned to last night’s meeting to provide an overview of impacts the COVID-19 pandemic has had on the Town’s finances.

“The bottom line is, just so far, I think the pandemic has had an economic impact on Cary’s resources of at least $10 million since mid-March,” said Mills.

The Town has had expenditures amounting to $4.3 million directly related to the pandemic. According to Mills, this money was “squeezed out” of the existing FY 2020 budget by redirecting funds from ongoing services and priorities. As for revenue shortfalls, the Towns two largest areas with significant losses are sales tax and parks and rec resources. Combined, these two sources of revenue are about $6.2 million below budget.

A more in-depth and finalized look at how the fourth quarter of FY 2020 wrapped up will be provided at the Council’s quarterly meeting set for August 13, 2020.

There were four citizens who participated in Public Speaks Out, two in the form of written comments and two called in live to present: 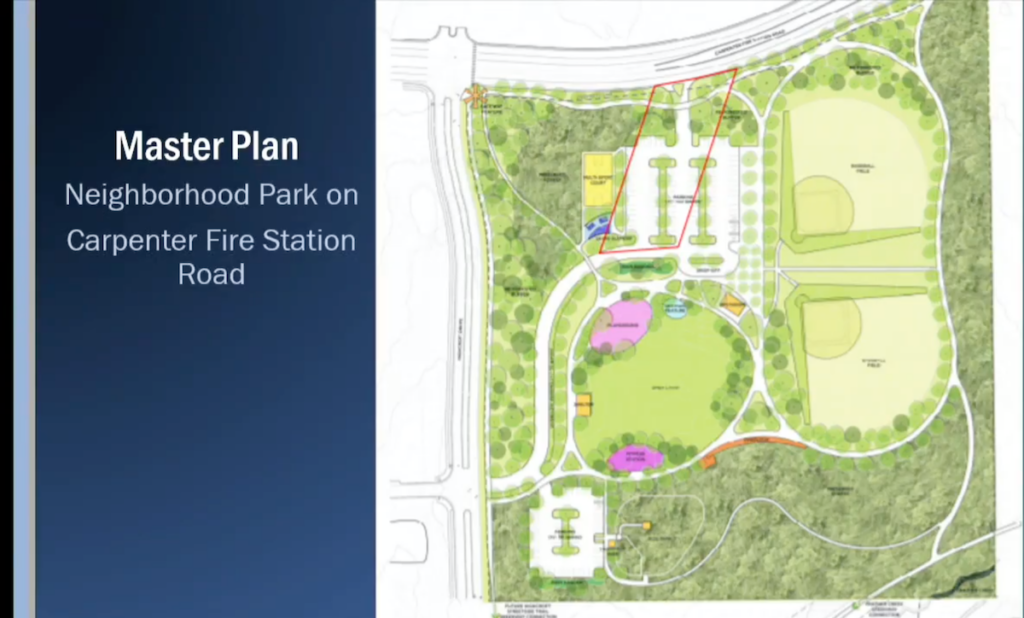 In preparation for a neighborhood park to be funded through the Cary Community Investment Bonds, the council hosted a public hearing on the annexation of 0.82 acres of Town-owned property which lies in the footprint of the future park. The land is at 7117 Carpenter Fire Station Road.

No comments or live callers participated and due to virtual meeting laws, the council must wait until a future meeting to take action on the annexation. 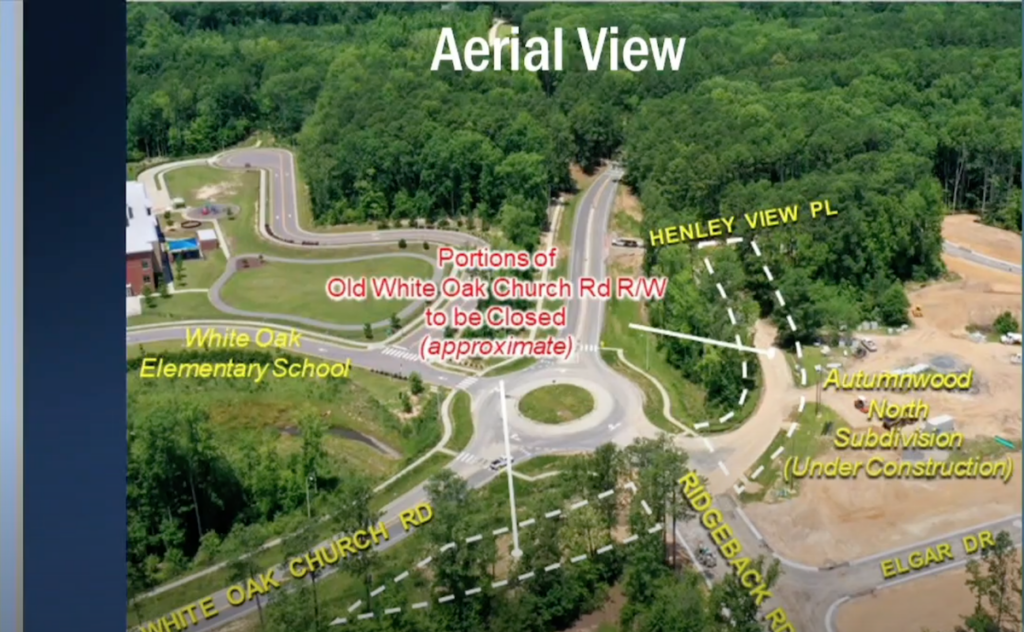 Near the roundabout at White Oak Elementary School, there is an unused portion of Old White Oak Church Road. The applicant, Capital Properties of Raleigh made a request for the Town to permanently close it.

According to the applicant, the closure would eliminate a right-of-way no longer in use, prevent vehicles from using it to by-pass the roundabout and allow the Autumnwood North subdivision to “better integrate into the existing street network” and “achieve a more favorable layout.”

In the public comment period, one citizen had a concern of ease of access to their home and another gave a comment in support of the closure. During discussion, Councilwoman Lori Bush asked if the applicant would have any intent to develop this land and the applicant responded that it would remain undeveloped.

The question of who would have ownership of the property after it’s official closure was raised by Mayor Pro Tem Don Frantz. According to Town Attorney, Christine Simpson, it is common for the adjoining property owners to own the land, split half and half. The responsibility of eliminating the road also typically rests on those property owners.

The council unanimously approved the closure following the public hearing.

The council meeting adjourned after a 30 minute closed session at about 8:30 PM. The meeting’s full video is available on the Town’s meetings portal and on Youtube.