Landguth spoke to the effects COVID-19 has had in the Triangle and is predicted to have across the global airline industry. The overarching theme was grim at best.

Under the federal CARES Act, RDU received $49.5 million. While it was a nice injection to their cash flow, Landguth says it represents just 17% of the airport’s yearly budget. On a larger scale, domestic airlines received a collective $61 billion in the CARES Act with half directly spent in labor costs with the stipulation that no employees could be furloughed until October 1, 2020.

With demand screeching to a near-halt, Landguth said U.S. carriers are actively encouraging employees to take voluntary leave packages to avoid mass furloughs. Despite these efforts, furloughs are still anticipated with Delta airlines indicating they could furlough up to 2,500 pilots by end of 2020. American and United have voiced similar warnings to their surplus of airline staff.

Projections from Cowen estimate airline jobs to the tune of 95,000-105,000 will be lost in early October.

In April 2020, there were 16,000 commercial airliners sitting on the ground at the exact same time, representing 61% of the world’s commercial fleet.

Domestically, U.S. flight carriers anticipate needing to permanently retire upwards of 20% of the U.S. fleet due to COVID-19. This would amount to about 900 aircraft parked for good.

The industry, by extension, would shrink 20% smaller, which Landguth says could be seen though smaller carriers and networks at airports like RDU.

CEOs from Delta, American and United Airlines have had this to say on the pandemic:

“This is the worst crisis I’ve ever seen in the airline industry… far, far worse than 9/11.”

“This is the most disruptive crisis in the history of aviation.”

“We should prepare for a sloppy, sluggish recovery, even after the virus is contained.” 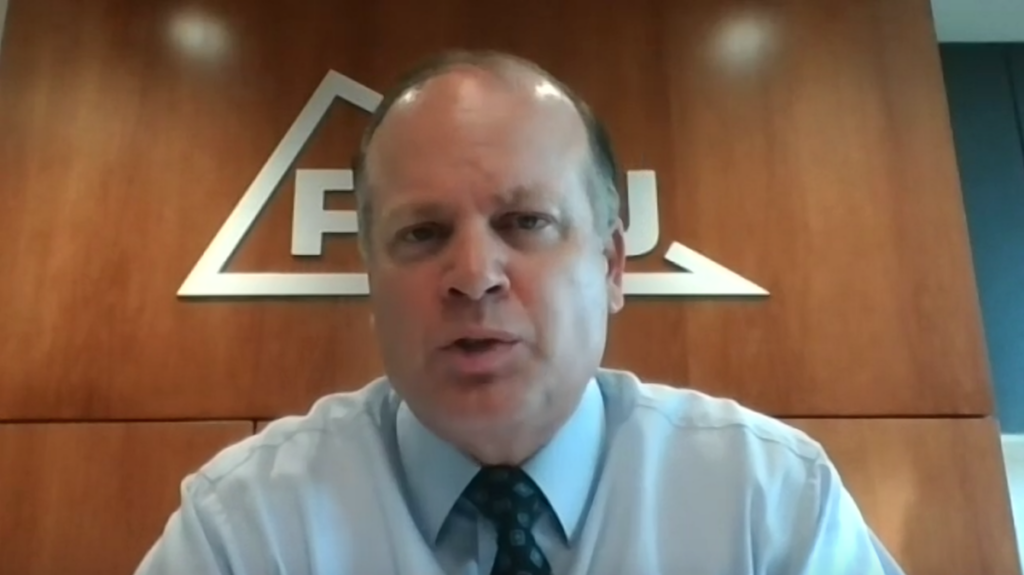 Landguth says the sloppy, sluggish recovery is exactly what they are starting to see at RDU. They don’t estimate a return to last year’s traffic levels until 2025.

The bottom dropped out on passenger numbers in March with the spread of the virus to the US. Those stats have only minorly crept up in the four months since.

Comparing the passenger traffic of July 2019 with July 2020, RDU’s daily departures have declined from an average of 211 departing flights to 70 with departing seats shrinking from a daily average of more than 25,000 to just over 9,000.

Of the various charts Landguth shared in the full meeting, this one shows the astounding reality of the crisis faced by the industry today in relation to previous crises in the industry. 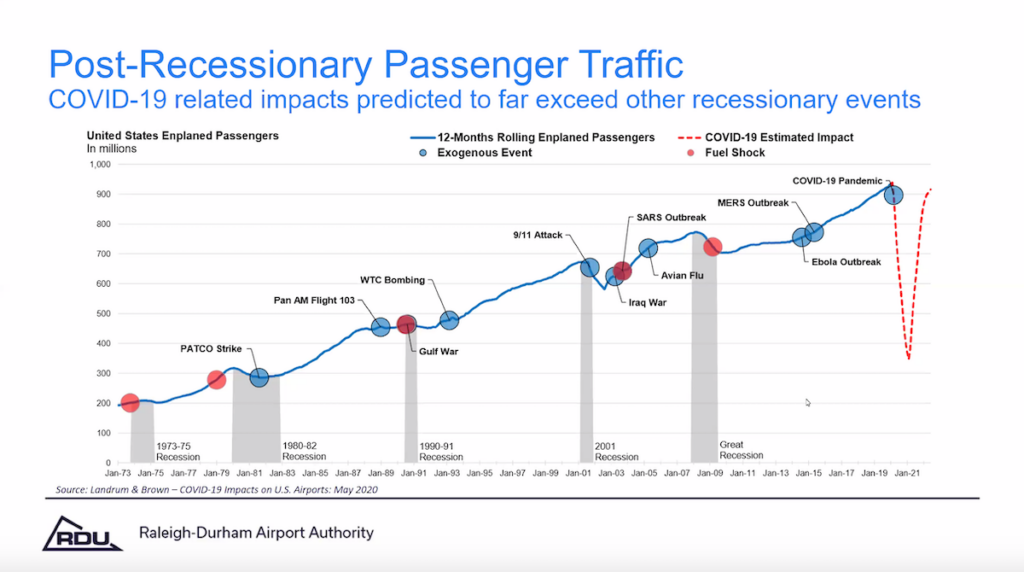 The blue line running left to right represents the trend in millions of U.S. passengers throughout history with the red dotted line on the right showing the sizeable drop brought on by COVID-19.

“Airplanes are a very expensive asset and having them sit on the ground, it just doesn’t work from a financial standpoint. You have to keep the metal moving in order to make this thing work,” said Landguth.

Many business travelers have voiced in surveys that they are likely to fly less, not fly until next year and some guess it will be about May 2021 before their company will resume corporate travel. Landguth says if business travelers do not come back quickly, carriers will have to continue to downsize the industry.

“Delta Airlines right now is burning $27 million a day of losses. You run that out over a 10-month period of 300 days, that’s $8.2 billion in loss for that carrier. That is unsustainable,” said Landguth.

The Future of RDU 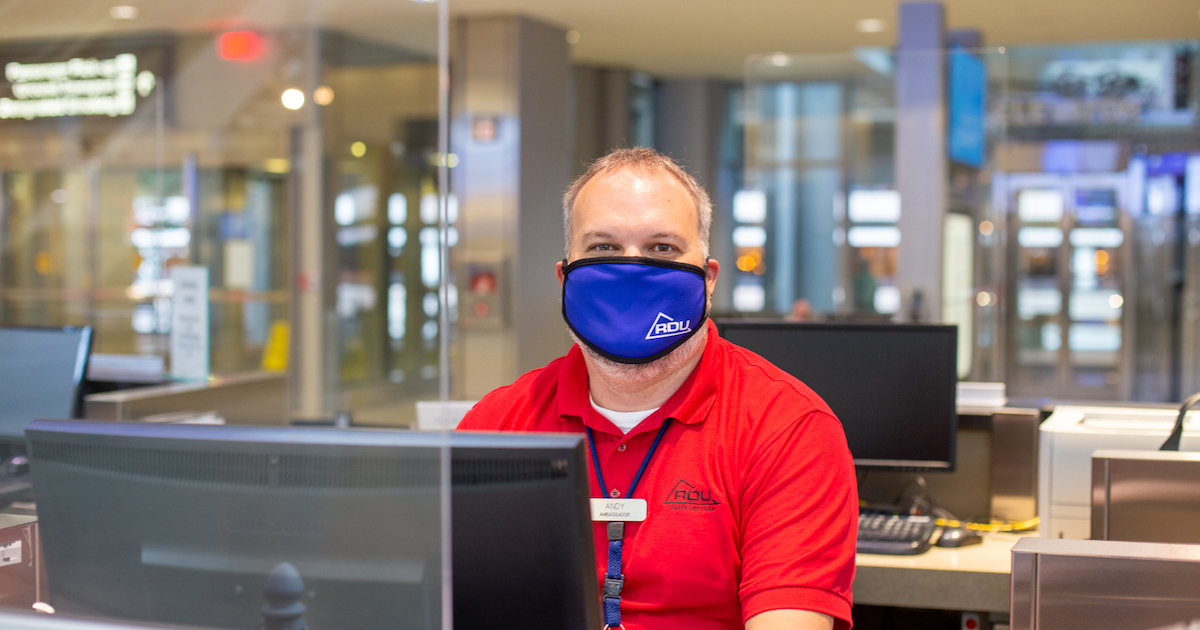 In early January 2020, CaryCitizen reported on RDU’s Vision 2040 plan which aimed to expand its infrastructure to meet the explosive growth they were having in destinations, flights and passengers. The plan included a new primary runway, upgraded taxiways, terminal expansions and more, amounting to a total investment ranging from $3 to $4 billion to achieve.

According to Landguth, a vast majority of these projects have hit the pause button with the exception of the replacement runway.”If we don’t return for 7 to 8 years to our 2019 levels, we probably don’t need to do those types of things,” said Landguth.

In the meantime, the airport has been doing slab replacements on it’s longest, 10,000-foot runway and is working with the Federal Aviation Administration to get the environment process started for the new runway.

“I don’t see a scenario right now where we would not continue with building that replacement runway. The existing runway is on a clock and at some point, it will run out,” said Landguth. “We will have to continue that even if passenger traffic will look as we’ve predicted.”

Moving forward, Landguth is confident the pandemic will not only change how people fly but where they can fly too. He predicts that RDU will not regain the number of points on the map they had pre-pandemic.

“We will get through this together and hopefully, we’ll be there to help support all of our businesses as they get back in the air with the recovery of their companies,” said Landguth.

RDU and the aviation industry are in for a long, slow recovery with limited revenues for years to come.

To learn more about the effects of the pandemic on the airline industry and RDU, watch the full recorded meeting. To explore the procedural changes and safety measures in place at RDU, see their new webpage.

Everyday Heroes: A Heart for Healthcare