Cary, NC — In a recent interview with Ruffin Franklin, he told us about his family’s history and their farm, located on Jones Franklin Road which is named for their property.

The Franklin family descended from James Franklin, the older brother of Benjamin Franklin. (Yes, THE Benjamin Franklin!) In 1825, Ruffin’s great-great-grandfather, Burrell Franklin, came from Virginia and bought 330 acres in the Swift Creek area of today’s Cary. Some of that land is still in the family today.

Ruffin’s grandfather, Burrell II, was twelve years old at the end of the Civil War. He was the oldest male left to work the farm. The Franklins never owned slaves, they had sons instead.

With Union soldiers in the area, young Burrell was sent to hide the livestock along the creek, hoping the soldiers would go down the road to the capital and bypass the farm, but they decided to camp overnight at the Franklin’s creek instead. When they found the “hidden” livestock, it was confiscated, but because the war was about over, Burrell was allowed to keep one mule to be able to work the farm. 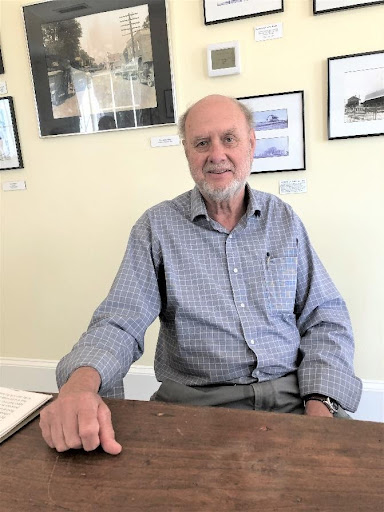 At one time, a small group of Union soldiers camped on the Franklins’ land, and Burrell’s mother actually cooked breakfast for them for a week. As they left, they gave her some union money to repay her for the food. It was the first money of value the family had seen since the beginning of the war. By then, all confederate money was worthless. Those funds really helped save the family.

In the spring of 1865, after the surrender, most Union soldiers left the area, but a few deserters stayed and were causing trouble. Because of that, Burrell’s father hired one of the Union soldiers for protection. One day, 12-year-old Burrell was plowing a field for cotton with the mule, when a straggler appeared and pointed a gun at him saying, “Sonny, unhitch your mule. I’m taking it with me.”

The hired security guard snuck up behind the straggler, stuck his own gun in his back and said, “I’ve been hired to protect this farm, and you’re not taking that mule anywhere. Get along.” Which he did. And, because he was there to stop the theft of the mule, the cotton crop was saved.