Each year, the hour-long event covers the growth, developments, demographics and other metrics of Cary’s successes over the previous year and a few updates on the ongoing and future focuses of the Town of Cary.

Weinbrecht started by saying that as the new year begins, the Town does continue to grapple with challenges, both personal and professional, and the tragic losses of life, including a Town staff member.

“That can’t be overstated,” he said, “but I can tell you as Mayor that my assessment is that Cary’s todays and tomorrows have never shone brighter.”

This optimistic outlook, he explained, is due to the talent, skills, experience and intentionality that he is seeing within the Town’s staff and elected officials.

“We’re very intentional on how we collect your money and spend your money. We’re very careful on planning and we act on those plans,” Weinbrecht said. He went on to say that a bigger driver of current and future success is the position Cary takes in looking for ways to unify Cary rather than divide it. 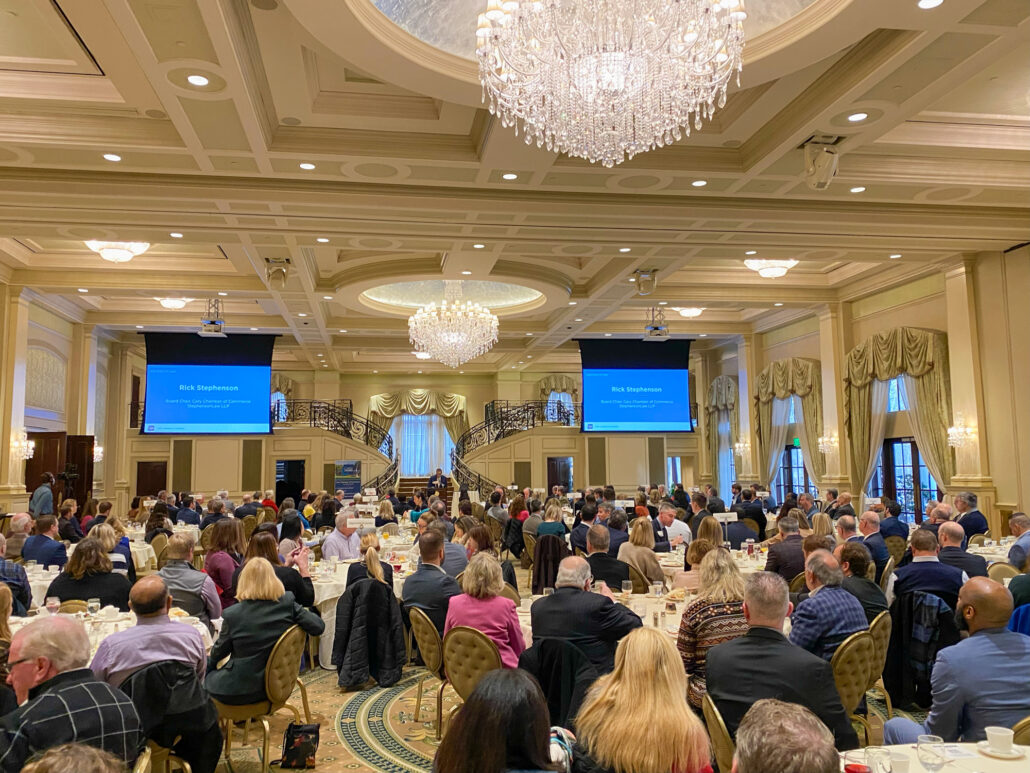 Cary’s population of over 179,000 people has continued to keep its status as the second largest town in the United States and the 7th largest municipality in North Carolina.

Of Cary’s population that is age 5 and older, 75% are vaccinated. This is currently the second-highest vaccination rate in Wake County.

Another figure of note, Weinbrecht said, was the percentage of Cary’s aging population with a reported 18% of residents being over the age of 55. In addition to older adults, Cary is a leader in attracting millennials at a rate higher than the national average.

As is usual, Cary remains a diverse homeplace with 24% of residents reported to be born outside of the U.S.

On the money front, Cary holds the highest rating possible from all major bond rating agencies. In 2021, the council’s passed a new budget totaling $400 million and voted to reduce property taxes to a rate of $0.345.

From the federal American Rescue Plan Act of 2021, Cary was allocated $16.5 million. The Council unanimously decided to pitch in an additional $3.5 million of Cary’s general fund balance to have an even $20 million for priority projects. These projects, according to Weinbrecht, will be focused on Cary’s health, wellbeing, infrastructure and facility investments.

The first $10 million was allocated earlier this month with a plan to spend $5 million on sidewalk projects, $4 million on affordable housing and $1 million will be distributed to local non-profit organizations.

In 2021, Cary saw the addition of 7 major businesses and 1,515 new jobs. Weinbrecht also reported Cary’s unemployment rate at 2.5% — a lower figure than the state and national rate, both of which are at 3.9%.

As it was in the 2021 State of Cary, initiatives related to sustainability and environmental improvements were a big focus of the Mayor’s remarks on Wednesday.

Namely, the Town has put money and efforts into growing its electric fleet, increasing the tree canopy, the expansion of solar use and bettering the management of Cary’s stormwater.

Cary has acquired two Teslas recently as functioning police cars. They were recently on display at the front of the Jaycee’s Christmas Parade in downtown Cary last month. 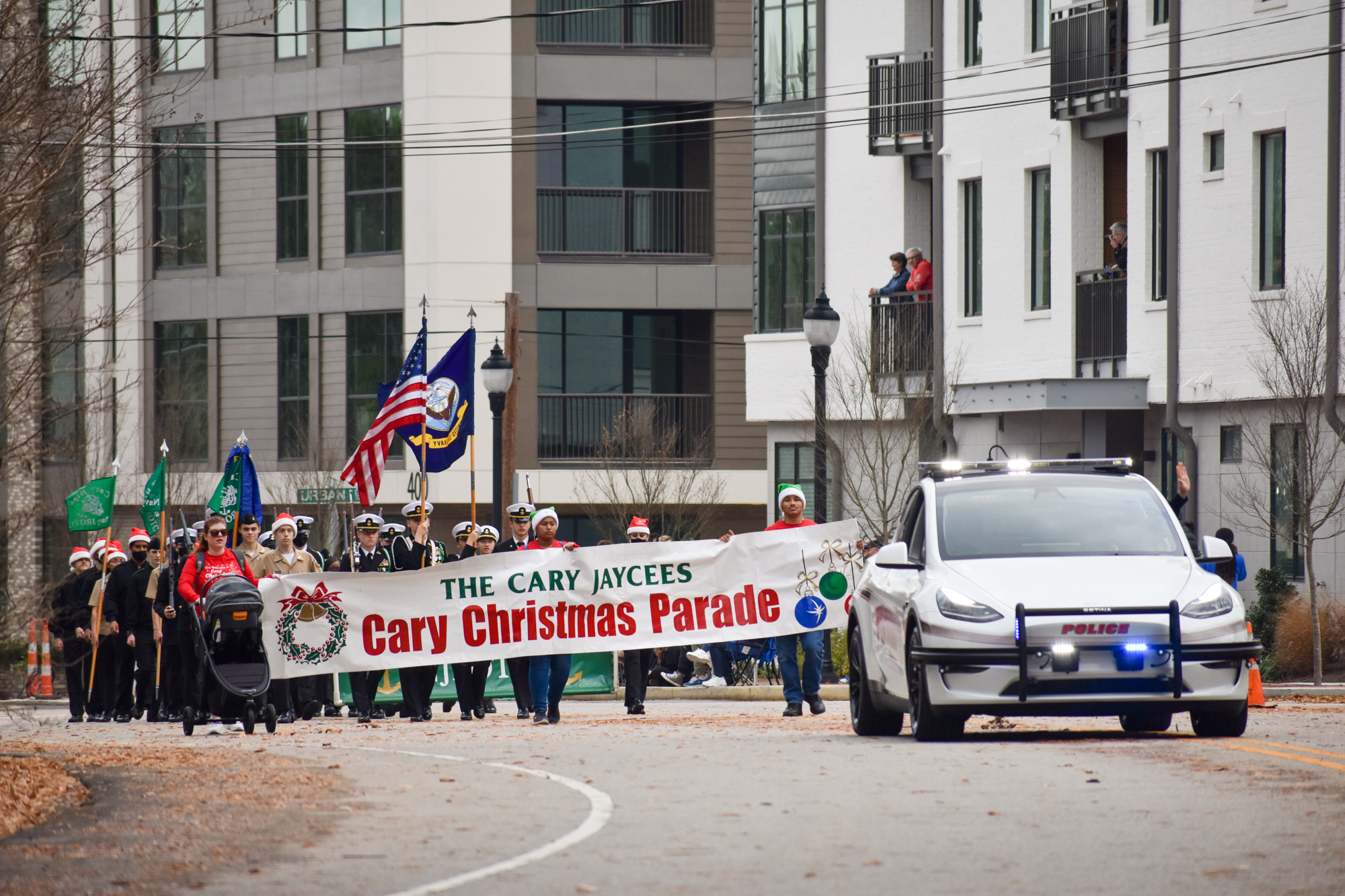 Weinbrect said an additional 8 cars will be added in 2022 with hopes of more in future years. Weinbrecht explained the cars pay for themselves in 2 years in the fuel savings alone.

“Based on that, we believe that we could be one of the first communities in the nation to have an all-electric fleet,” said Weinbrecht.

As for the tree canopy, the Town’s ‘My Tree, Our Tree’ program has given away over 1,500 trees to residents and 7 tree planting events were held in 2021.

Cary’s solar footprint will also be growing in 2022 with additions of panels as part of improvements coming to the USA Baseball National Training Complex, the incoming Transit Multimodal Center and the Cary/Apex water treatment campus.

Cary’s environmental plan is also in for an update to include more related to climate action, solid waste, open space, urban forestry and more.

The Town Council adopted a new housing plan in November 2021 and heard the support and need for such a plan from many residents and local nonprofit leaders.

“When you drive up demand for housing, you drive up the cost of housing. So, to create affordable housing is a really daunting task,” said Weinbrecht.

In response to this, the new housing plan is aimed at:

In addition to these new pillars of focus, the Town allocated $5 million in federal ARPA funds to affordable housing in Cary. 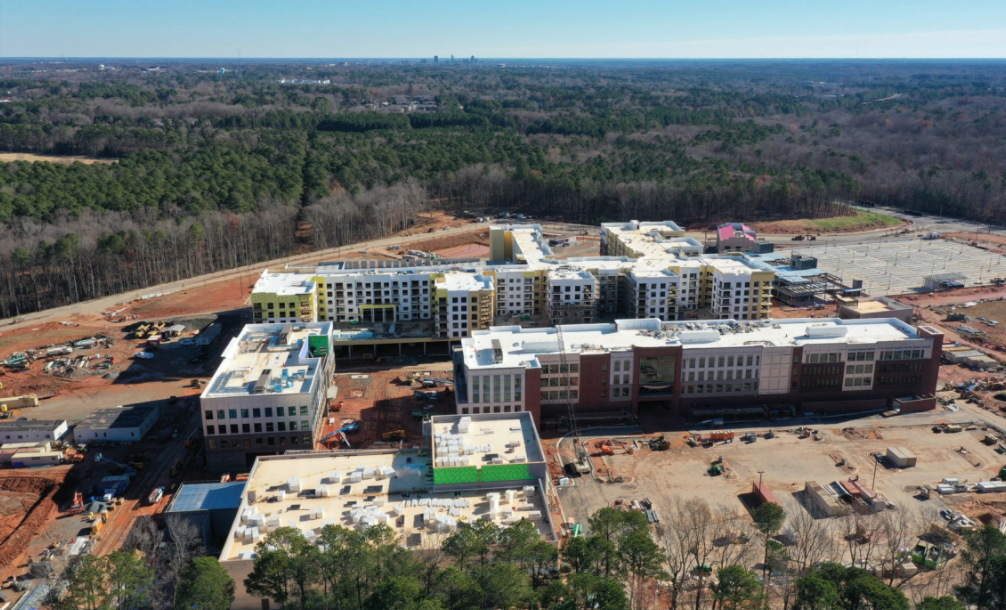 The first big phase of the Fenton development is set to open this spring and is the largest development in Cary’s history. For the latest news and updates, see our previous Fenton coverage.

It seems that the Cary Towne Center’s days as a standing mall are growing shorter. While demolition has not yet begun and the rezoning case from Epic is not yet approved, the new owners have obtained the necessary permit to demolish the buildings except for Belk.

Another mall site in Cary, South Hills, will also soon be flipped to be a new mixed-use area as it recently was sold to new ownership.

Weinbrecht confirmed Apple will be a tenant in one of the MetLife buildings that border along Lake Crabtree. Other big names like Garmin and Protolabs are also expanding their businesses into Cary. 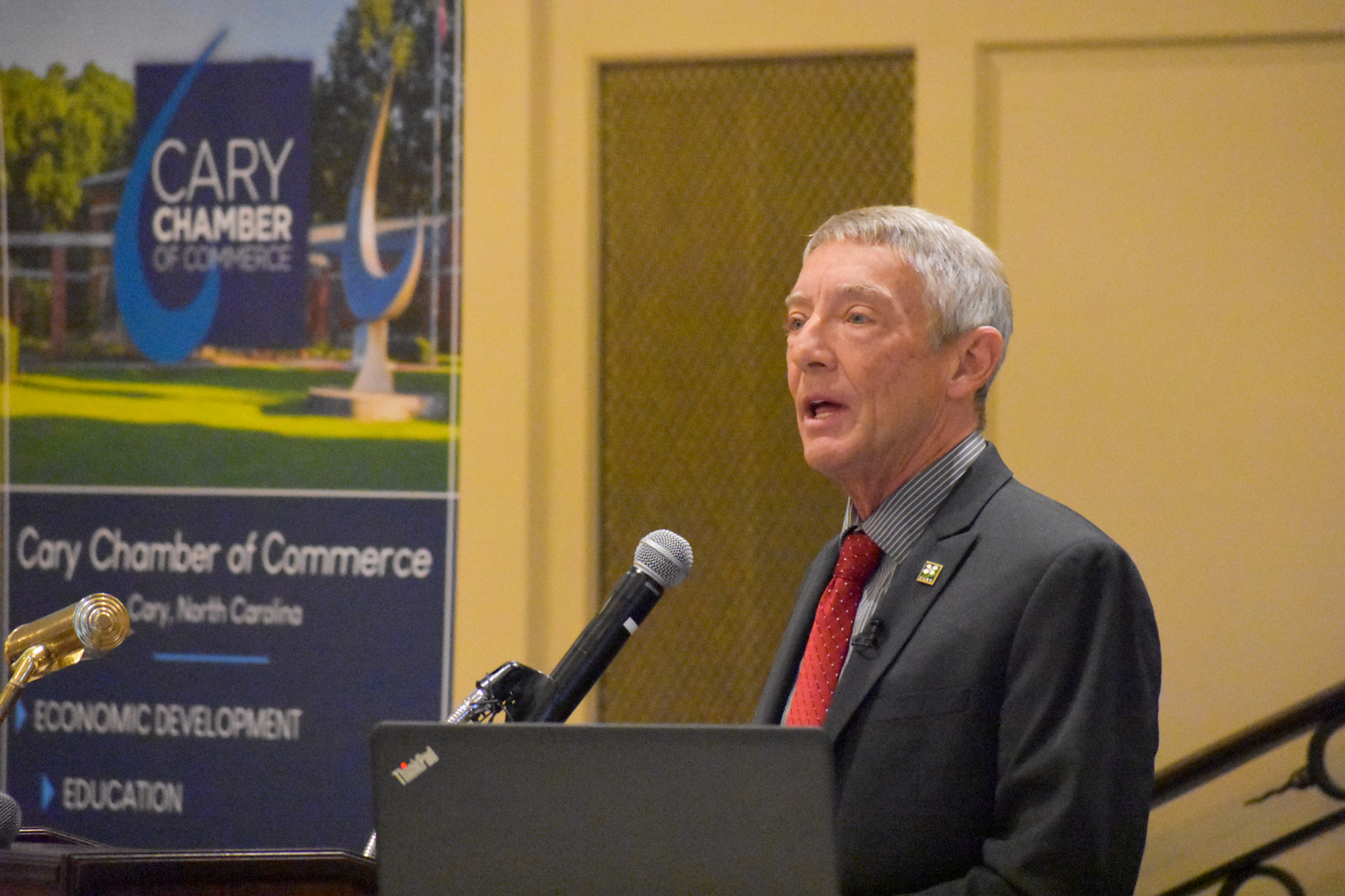 There is a speculative and not yet approved parking deck that the Mayor mentioned could go near some incoming developments downtown.

“It’s very possible that we’ll have a parking deck next to the Rogers which will really help with our parking situation downtown,” said Weinbrecht.

This type of parking infrastructure would help accommodate the new and incoming developments that would attract more people to downtown Cary. Namely, the Rogers Development, which will bring mixed uses of 40,000 square feet of office space and 10,000 square feet of retail.

Other nearby developments include The Walker, Park Station, Urban Place, Chatham Walk, the Williams House and Meridian East.

Also new on the scene have been several shops in The Center on Chatham Street. This area got a “facelift” in 2021 and got new tenants like DiFara Pizza, Hank’s Downtown Dive, Wyatt’s World Fitness and Geluna Gelato. Further down Chatham Street there is also the old Bitting Electric site that will soon become home to two new breweries.

Lots and Lots of Park Projects

While Downtown Cary Park has taken up a lot of the limelight lately, there are several plans and ongoing improvements in the works to expand Cary’s parks and recreation facilities.

Neighborhood parks that are in the planning process now include Carpenter Fire Station Road Park and McCrimmon Parkway Park. Others that are reopening soon after extensive renovations are Annie Jones Park, Dunham Park and Walnut Street Park. Also opening soon with its second phase is Mills Park.

Large-scale upgrades will also be coming to the USA Baseball and Cary Tennis Park complexes. Construction of a new clubhouse will begin soon at USA Baseball with estimated completion in Winter 2023.

As residents drive and walk around in 2022, they will likely pick up on new sections of sidewalk and other improvements along their daily commutes.

Street intersections getting improvements include:

Pedestrian improvements will include:

Q & A with the Mayor 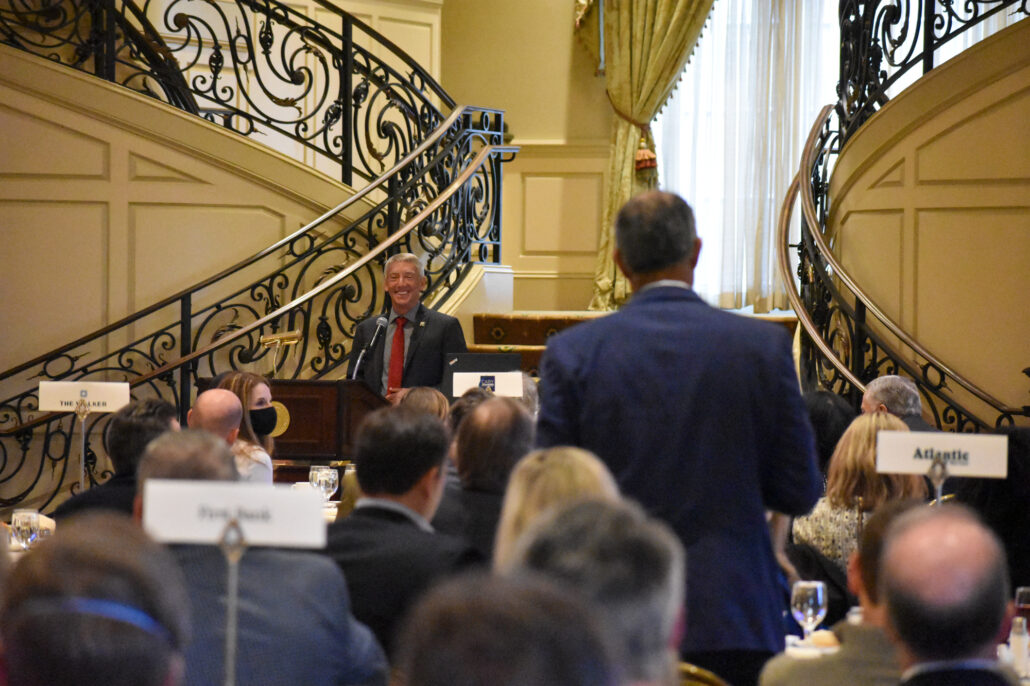 Morrisville Councilmember Steve Rao stands to ask Mayor Weinbrecht a question at the end of the event.

At the event’s end, the Mayor was asked questions related to schools, Cary’s aging population, affordable housing, neighborhood sidewalk improvements and the status of the Town’s rebranding efforts to come up with a new Town logo.

In his update on the latter, the Mayor said the tagline has been agreed (but not officially approved) to be “Live Inspired.” As for the logo, he hesitantly said that he anticipates the logo could be completed and agreed on by Summer 2022.