Cary, NC — The Columbus Blue Jackets were stunned on New Year’s Day after getting a “comfortable” 4-0 lead over the Carolina Hurricanes only to see the Canes pound in 7 unanswered goals to lose 7-4.

Well, the Jackets did some pounding of their own Thursday night in a 6-0 thumping on the listless Canes.

The Canes started the week traveling on Monday to Philadelphia to play the Flyers on Tuesday but found out after they got there the game would be postponed as many of the Flyers were in Covid protocol.

Turns out the Flyers had 21 players available… think back to when the NHL forced the Canes to play with just 16 skaters. The Flyers held practice on Tuesday but wouldn’t allow the Canes ice time as “there was a basketball court still over the ice.” Also turns out both the Flyers and the NHL knew about postponing the game hours before the Canes were scheduled to leave RDU.

Hmmm, is something waddling and quacking like a duck but think it’s an eagle?

Better Start, But Then….. 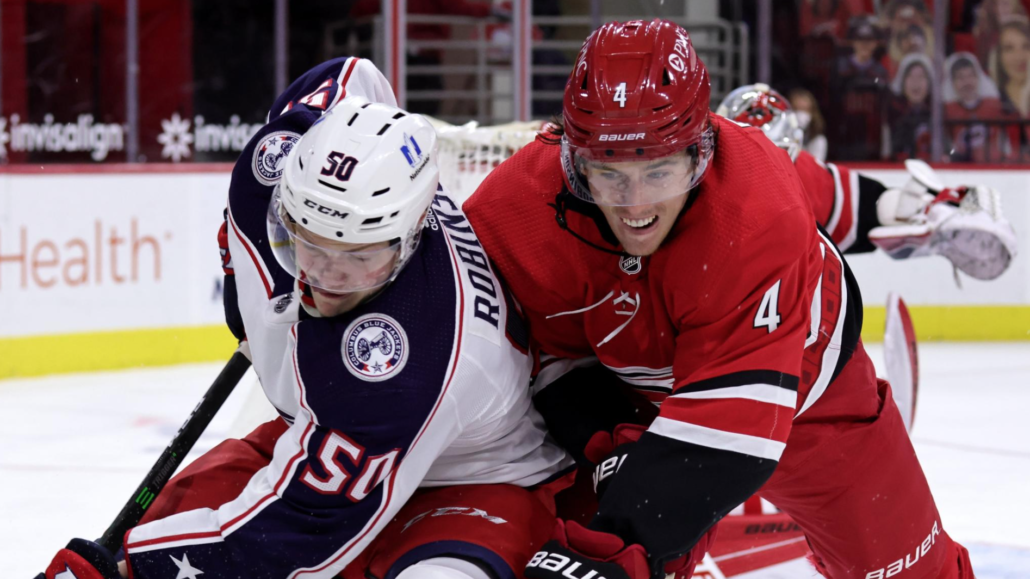 Rod Brind’Amour has said ever since he was a player, any team can beat any other team on any given night. Plus when you have your clock cleaned like the Blue Jackets did less than 2 weeks ago, you like to flush those games but these pros do file certain things into their memory and want retribution. And boy did they get it.

The Canes added some additional drama before the game when stalwart defenseman Jaccob Slavin was out due to Covid protocol and Jack LaFontaine would be the backup goalie. Last week LaFontaine was in grad school worrying about a thesis while playing college hockey. He was a 3rd round draft pick by the Canes in 2016 and has had an impressive collegiate career however opted to sign mid-season to jump to the big dance.

Not seeing Slavin out during warmups was a little unsettling as he is one of the top two defensemen in the NHL and is just so smooth and so effective, he makes watching his play so enjoyable. The sad part is the Canes started the game with probably their best play early on in the game, as they’ve had in their past 4 outings. This being just their 5th game over the past 26 days didn’t help as their timing was off and they just didn’t have much in sync.

The first two shifts the Canes had were, sadly, the best shifts of the night. The line of Vincent Trocheck, Andrei Svechnikov and Jesper Fast started and quickly had the pressure on Jackets’ Elvis Merzlikins. The line of Sebastian Aho, Teuvo Teravainen and Seth Jarvis continued keeping the puck in the Jackets end but after those two shifts, the ice really started to tilt in the Jackets favor.

Bean settled the puck then sent one to the net that Andersen blocked with the puck bouncing in front. Jack Roslovic had the quicker hands, skooching the puck to Emil Bemstrom atop the crease who went forehand- backhand to knock it in for the 1-0 lead.

The Canes allowed 2 more breakaways in the period and Andersen came up big on both but how long could that last? At the buzzer to end the period, right after Andersen made another save, the teams all paired up, possibly not saying have a restful intermission with Svech and Bemstrom drawing minor penalties. 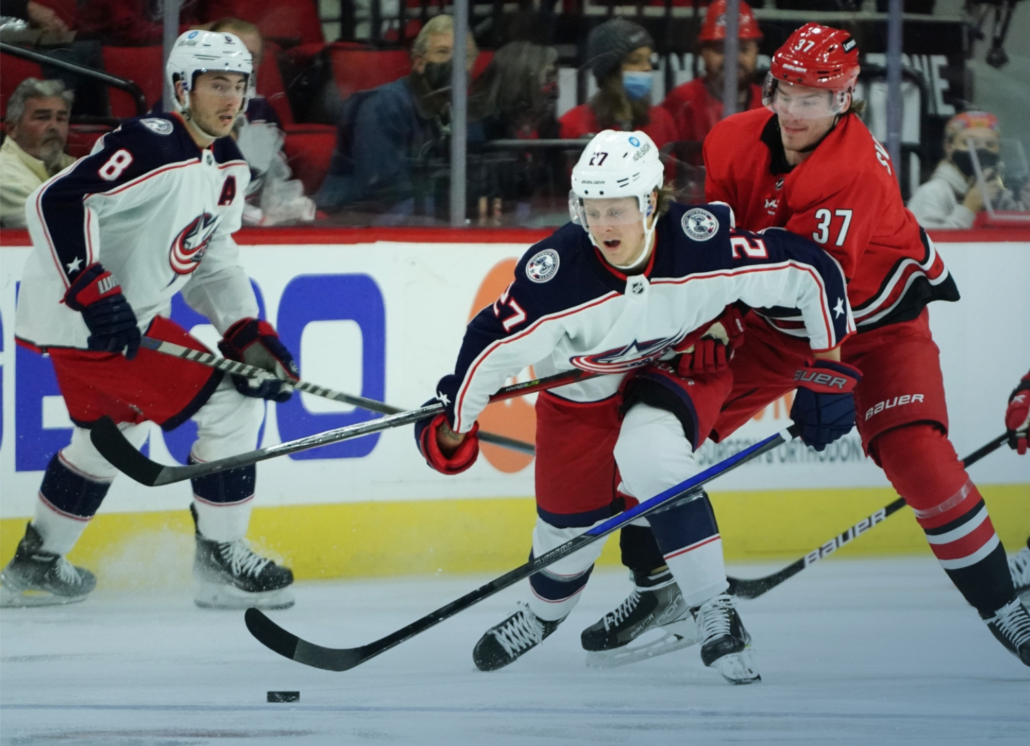 With the second period starting off 4-on-4, it became more of a possession game and like the 3-on-3 in overtime, one in which the main thing is not to have a turnover that can lead to an odd-man rush. That type of hockey can be fun to watch during a game as some highly skilled players can really show how talented they can be.

Once it got back to 5-on-5, the forechecking and banging bodies started up in full swing. The only highlight the Canes had in the period was when the third and fourth lines had successive shifts when they were literally throwing their weight around. It was easy to see where Jordan Staal, Steve Lorentz, Nino Niederreiter and Derek Stepan were on the ice as Jackets were seen laying on the ice in their wake.

The Jackets countered with a few hits on Jesperi Kotkaniemi and Martin Necas selectively choosing their targets. Midway in the period, the Canes had a golden opportunity when KK was dangling the puck along the far boards, placing a perfect pass to the stick of Tony DeAngelo cutting down the near side.

Tony D received the puck in stride, getting off a quick wrister but not high enough allowing Merzlikins to make a pad save. Eric Robinson grabbed the rebound passing wide to Vladislav Gavrikov who made a head man pass to Yegor Chinakov who beat Andersen on the breakaway. Notice the trend here: Jackets breakaway=Jackets goal.

To show how fast this game is to be an official, Turbo got tripped by Gavrikov as he was crossing the Jackets blue line but was called for embellishment which sent the Caniacs in orbit. Turbo’s reputation is anything but an embellisher* (*see Marchand in the rule book video section for embellisher).

A Period To Forget 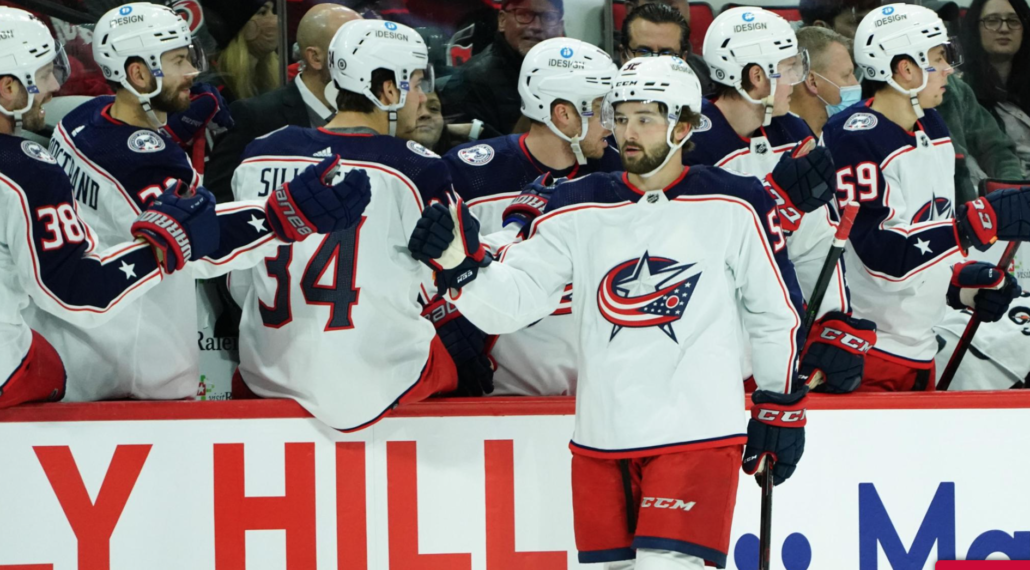 The Canes and Caniacs may have thought they had the Jackets just where they wanted them, down 0-2 to start the third, hoping for another New Year’s Day turnaround. Unfortunately — not going to happen in this game.

Bad passing by the Canes out of their own end led to a turnover that the Jackets wasted no time in converting to a Patrik Laine blister shot of a goal with just 4:26 gone. Columbus sunk the dagger deeper just 37 seconds later with no other way to say it but a total lack of defense that left Andersen out to dry.

Then the whirlwind week for KaFontaine came full circle when he was given the nod to replace Andersen. He’s an impressive size goalie at 6’4”, 204# so he should be agile. The book on him is he’s an athletic type goalie which is always a good thing. It took all of 30 seconds for him to face his first shot.

Staal lost the puck in the Jackets end with Oliver Bjorkstrand knocking the puck to the neutral zone. Cole Stillman simply beat everyone to the puck for another breakaway going in all alone on LaFontaine, wristing one stick side for the 5-0 lead and a “welcome to the NHL.” You had to know LaFountaine was thinking, “dang this is a lot faster than college hockey.”

After another botched attempt to keep the puck in the Jackets’ end, Texier won a board battle passing to the middle of the ice where Roslovic easily picked up the puck for another breakaway to go glove side on LaFontaine for the final score. Brutal loss, just awful.

The next game is a Saturday matinee at 1 against the rising Vancouver Canucks. Be there!