Cary, NC — There was only one thing not going right for the Canes in the first half of the game on New Year’s Day against the Columbus Blue Jackets and that was the score.

Despite outplaying the Jackets in every category except the most important one, the score, the Canes fought back from a usually insurmountable 4-0 deficit to silence the cannon and score 7 consecutive goals to win 7-4 to start 2022.

Canes Dominate But Find Themselves Down by 3 Goals 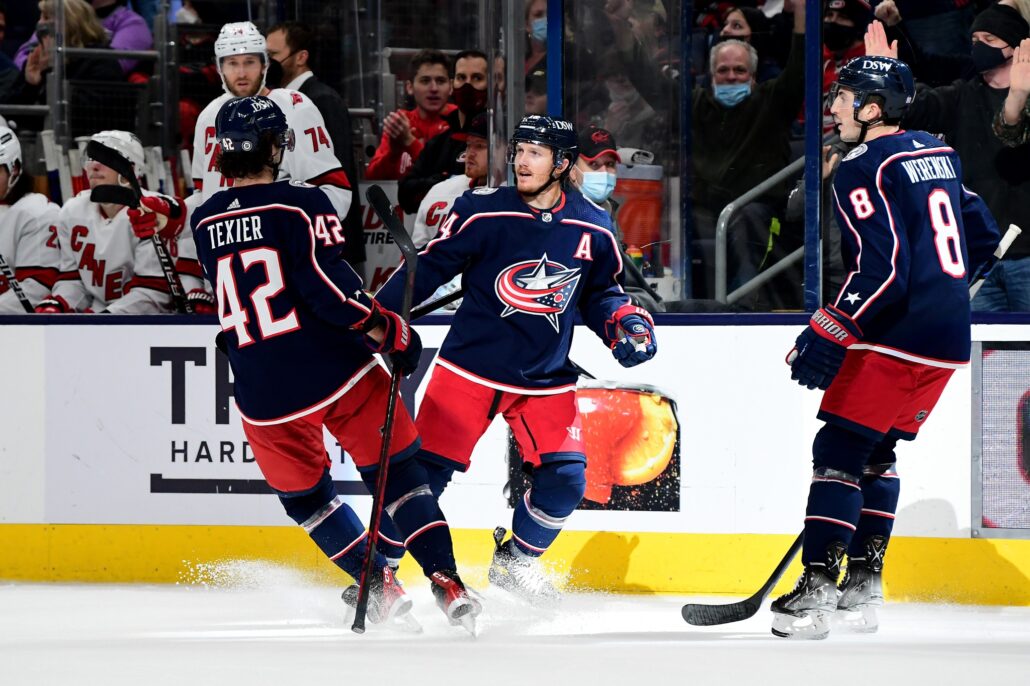 Both teams had a game under their belts after coming off the extended break so legs wouldn’t be the excuse for anyone. Vincent Trocheck won the initial faceoff and the Canes immediately started the aggressive and possession game.

By the end of the period, that aggressive play led to all 3 goals by the Jackets but with the Canes, the ‘system’ combined with risk/reward is the only way the Canes, and Rod Brind’Amour know how to play. Just under the 7-minute mark, the Jackets had just their third possession in the Canes’ end.

The Jackets won a battle along the far boards with the puck when Emil Bemstrom passed up to Jack Roslovic inside the blue line. Roslovic held the puck long enough for Zach Werenski to hop over the boards on a line change, going over the blue line at full speed, picking up the drop pass and easily maneuvered around the Canes defense for a backhander that beat Antti Raanta for the 1-0 lead.

Five and a half minutes later after 3 shifts in the Jackets’ end, Gustav Nyquist picked up a loose puck inside his own blue line with teammates on either side of him for a 3-on-2, almost a 4-on-2, with Ian Cole and Ethan Bear on defense. Nyquist came down the middle, selected Adam Boqvist on his left, sending a sweet lead pass that Boqvist easily beat Raanta on a wrister.

The Canes had a golden opportunity to cut the lead in half with a powerplay late in the period. A minute into the powerplay Alexandre Textier stole the puck, saw Nyquist jump over the blue line then made a nifty lob/clear/pass that Nyquist grabbed, took 4 strides and beat Raanta from 20’ out. Raanta wasn’t playing badly, just the recipient of some tough luck on pinching by the defense but something needed to change.

Lorentz Opens The Gate, Skjei Cuts Lead in Half

With no surprise and no reflection of his play, Raanta was replaced by Frederik Andersen to start the second. Raanta’s stats will take the hit as Columbus scored those 3 goals on just 9 shots.

The Canes continued to dominate the play, with the defense pinching at the right times, the forwards were forechecking very effectively, shots were on goal, wide or blocked. Dozens of shots but nothing was able to penetrate the 6’6” Jackets goalie, Daniil Tarasov. In the ninth minute in the second Texier stole the puck at his own blue line with two teammates joining with only Cole back on defense.

Texier held on to the puck until he got to the right circle in the Canes’ end when Cole timed a belly flop at just the right time as Texier drew his stick back for a pass to his left. Cole blocked the puck but it ran down to his leg with his boot touching it to go under Andersen for a solid (?) 4-0 lead.

In looking at the Canes bench, they didn’t have that “down and out” look. There was still that chatter that was going on, maybe not with any smiles, but could have been with some “let’s get going.” Brind’Amour had the fourth line out and being the workhorses that they are, had a 5 man scrum in the Jackets far corner with Steve Lorentz coming away with the puck.

Lori quickly passed up to Tony DeAngelo at the high slot, then started to the blue crease. Tony D saw daylight making a perfect pass right to Lori’s tape who angled his blade to pop it in to, finally, get the Canes on the board. That goal was, as Lorentz said, later on, the opening of the flood gates.

The Canes continued to keep the puck in the Jackets zone. Andrei Svechnikov, who was very dominant all game, had the puck inside the far circle, deked 2 players and with a crowd in the dirty area, sent a hard wrister that hit the side of the net.

Svech followed his shot, snared the rebound, flew around the back of the net, looked for a linemate not being mugged atop the crease, continued skating, turned the corner then saw Brady Skjei begging for the puck on the perimeter of the opposite circle. Svech obliged, feeding a gutsy pass to Skjei’s tape who picked the far corner for his second of the year to cut the lead in half. 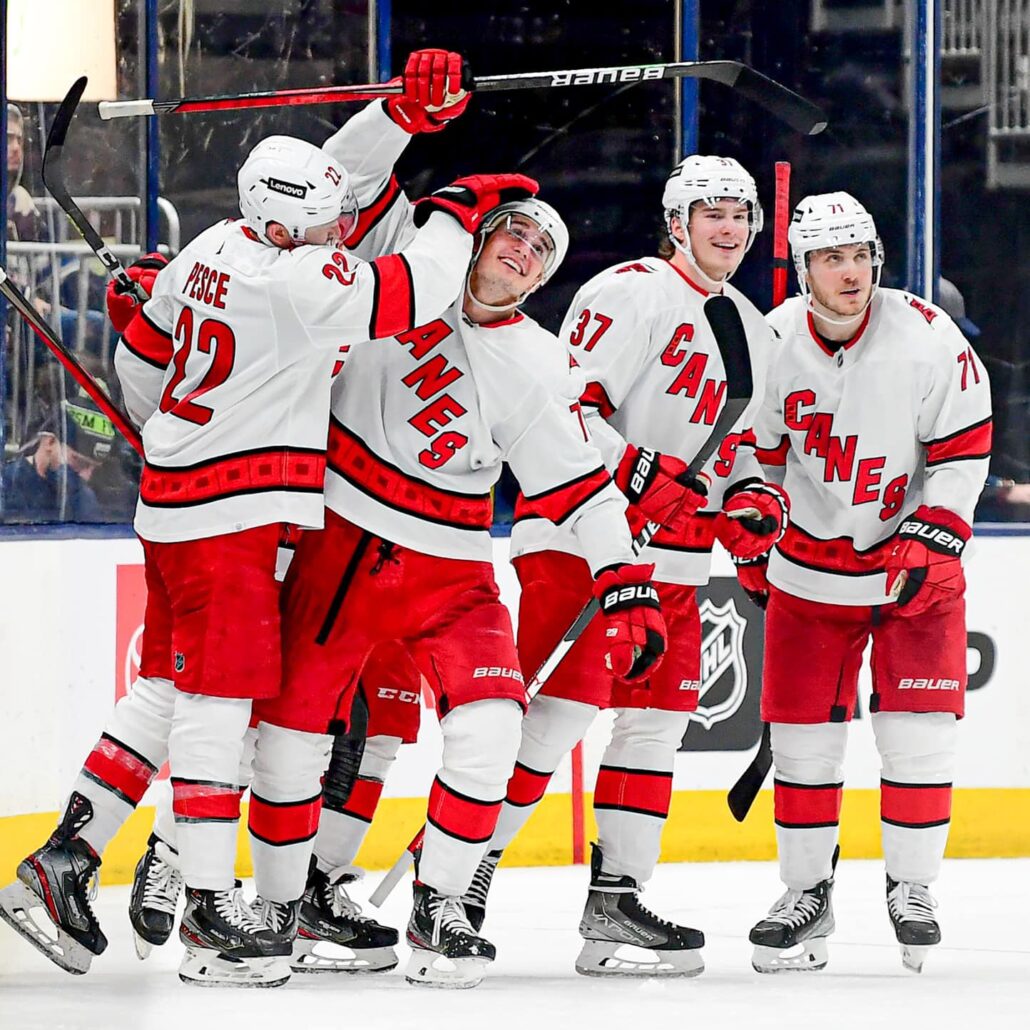 There was no letting off the gas in the third. Not that the Canes felt they had the Jackets where they wanted them, they still had that score to deal with but they still had that jump in their step. Similar to the last home game, with 5 minutes gone in the period, the ice at the Canes end looked like the Zamboni just put down a new sheet as all the action was in the Jackets zone.

Not surprisingly but with all the rubber and action in his end, Goalie Tarasov pulled a leg muscle with Elvis Merzlikins going in net for the third. Tro won another faceoff to Merz’s left, drawing it back to Brett Pesce. Pesch settled the puck, and on a set play, saw Skjei jump down on the right side, sent a hard lead pass that Skjei caught, again going far side for his second career 2 goal game.

A few minutes later, the Jackets dumped the puck in the Canes’ end. Andersen went behind the net to stop the puck dropping it to Cole. Cole carried it up the left side, crossed the red line then rimmed the puck along the near boards. Lady Luck was on the Canes’ side as the puck hit a glass stanchion, bouncing to the middle of the ice in the mid slot with Nino Niederreiter picking up the puck and quickly wristing it in to tie the game.

Nino may have felt some karma as moments earlier he dinged a puck off the crossbar. The Canes again won the faceoff after the goal and quickly had the puck deep in the Jackets’ end.

Jordan Staal muscled the puck along the near boards, popping it over a defender’s stick, picked up by Jesperi Kotkaniemi. KK made space below the goal line passing over to Martin Necas who banked a nice pass off the boards to Bear on the right point. With KK and Staal in front, Bear flung the puck to the net but had eyes, going in untouched just 16 seconds after Nino’s goal to put the Canes up by 1 with the fans starting a BooJacket chant.

Just over a minute later, Boqvist retrieved the puck in his own zone as both teams were making line changes, then made a horrible attempt for a headman pass that Seth Jarvis read perfectly. Jarvis carried it from his blue line into the Jackets zone along the near boards doing a 360 spin-o-Rama at the top of the circle before he sent a backhander along the ice that Merz kicked out with his pads but Lorentz was in the right place at the right time for the juicy rebound snapping it in for a solid 6-4 lead. The Jackets pulled their goalie with over 3 minutes left and didn’t take long for the Canes to get #7. 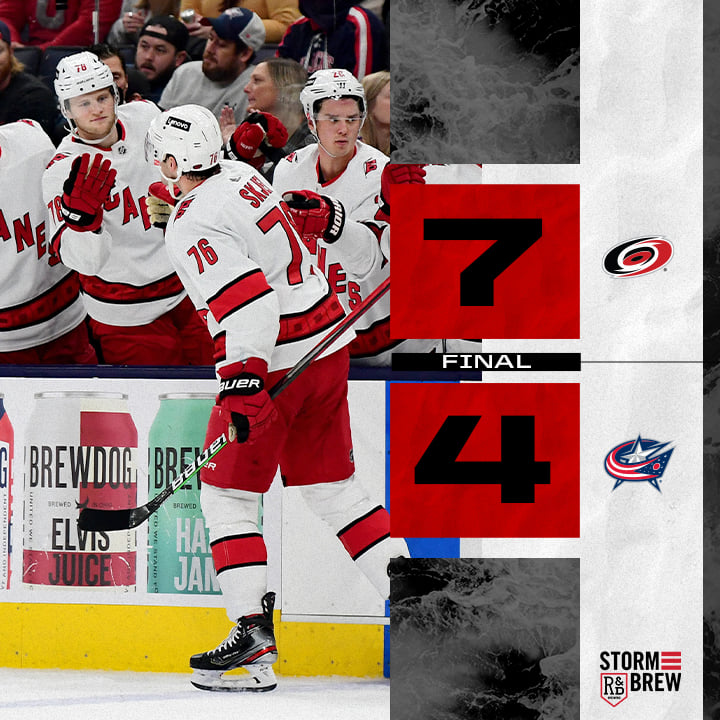 Trocheck outraced his man to the puck along the far half boards then made a soft backhand pass that Svech quickly put away for the final score. Unbelievable comeback. The statistics tell the story: the Canes had 90, yes 90, shot attempts. That includes shots on goal (49), shots missed(23) and shots blocked(18). Combined for the Jackets: 33, with just 18 shots on net.

The Jackets blocked as many shots by the Canes as they had on net. Historic performance. Must be something about games around New Year’s. Years ago at home, on New Year’s Eve, the Canes were down by 3 goals to the Canadiens and won that game.

The next home game is Friday against Calgary, be there!

January Shows at The Cary Theater