Cary, NC — The Canes returned to action with the last game a long 12 days ago as the NHL extended the Christmas break due to 29 of the 32 teams having multiple players, and staff, on the Covid protocol.

Some Canes players out with Covid before the overall stoppage of play, haven’t played in nearly 3 weeks. At the NHL level, that’s huge. The NHL made 2 smart decisions over the downtime: first to bring back taxi squads to provide every chance of keeping enough players healthy and available to play.

Secondly, they made the hard but smart decision to not have NHL players in the Olympics. While a huge disappointment for every player expecting to go, the risks were just too great. For those that haven’t heard, the IIHF World Junior Championship, being held in Canada, was just canceled after the tournament started.

So back to the first game back against the Montreal Canadiens had everyone: players, coaches, Caniacs, and one stressed-out CaryCitizen hockey writer clamoring for hockey to start again. The Canes took advantage of the weaker team in every category winning in a commanding fashion, 4-0. 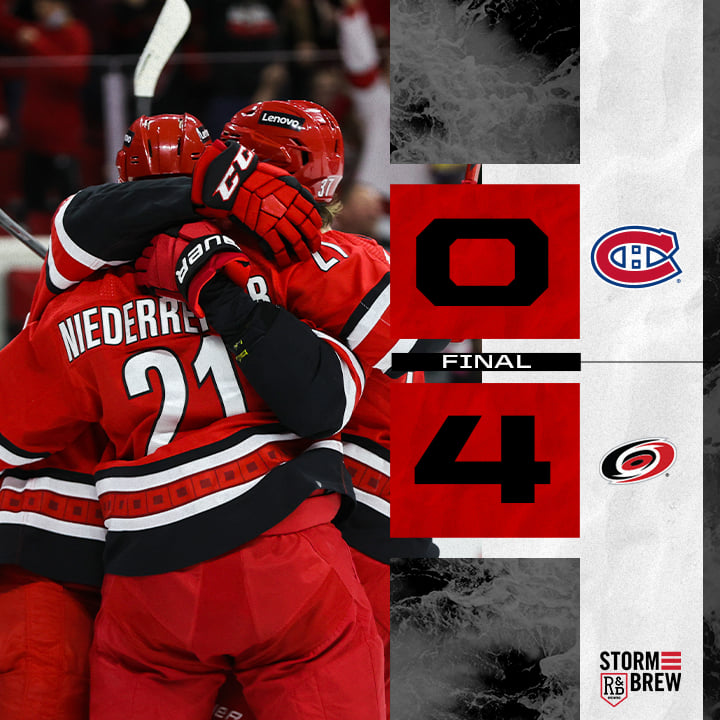 The Canadiens have been decimated with Covid and injuries but the Canes Southern hospitality stops when the puck is dropped. The Canadiens did have a rare occurrence in their last game when 3 players scored their first goal in their first NHL game.

The first shifts for everyone seemed to be getting their legs back in game form. Body checks were rare at the beginning of the period but after a few minutes, and a few reminders by the coaches, the body checks and forechecking were back to “normal.”

Jake Evans had the first true scoring chance of the game when he ripped a shot from the mid slot that banged off the right post. The next entry of the puck into the Canes end was a lead pass to Nick Suzuki that was a hair too far in front with Sebastian Aho making a smart defensive play by stretching his long stick just ahead of Suzuki’s touching the puck to the back wall harmlessly out of any danger.

Just under midway in the period, the Canes got the game’s first powerplay when Alex Belzile got the call for hooking in the Canes’ end, behind the goal no less, that will add to Habs’ coach Dominique Duchame’s frustration. Special teams for the Canes were the complete difference in the outcome of the game.

Rod Brind’Amour juggled powerplay lines during the time off with the emphasis on fast movement and net-front presence. That mix and practice paid off. With the second unit on the ice, Jesperi Kotkaniemi won the faceoff with the Canes making crisp passes on the perimeter.

Jaccob Slavin, on top of the umbrella, passed left to Andrei Svechnikov above the near circle. Svech looked to pass back to Slavo but sent a hard, gutsy pass cross-ice to Seth Jarvis above the far circle. Jarvis quickly passed up to Slavo sending a hard snap wrister to the dirty area of the goal with the puck bouncing about 10’ in front of the net with netminder Sam Montembeault making a nifty pad save.

Nino Niederreiter was on top of the crease, kept his eye on the puck, saw it trickle off the pads then turned around to swipe it in for the 1-0 lead. Not saying there was any mercy going on but the Canes were dominating everything on ice—faceoffs, shots, possession, steals, scoring chances.

Then the Canes found themselves on the receiving end of 3 consecutive penalties playing 6-½ minutes of the last 7-½ minutes of the period short. On the first Canadien powerplay, right after a clear by Slavo, Fishy and Teuvo Teravainen hopped over the boards to replace Jordan Staal and Tro. Aho won a battle along the near boards just inside the Canes blue line, out skating his man through the neutral zone into the Habs end.

Turbo joined on the right with only one defender back, going at full speed, Fishy went halfway to the goal, possibly thought shot then bobbled the puck recovering it to pass over to Turbo who got off a nanosecond release lifting the puck into the far upper corner for the Canes second shortie of the year. The Brady Skjei holding penalty and Vincent Trocheck’s first penalty appeared to be weak calls but Tro’s second penalty was a textbook trip albeit accidental.

Turbo Pots His Second Goal of the Night

The Canes started the second with a solid kill of the last half of Tro’s penalty.

The Canes’ fourth line was very active on both sides of the puck. Steve Lorentz used his big body to muscle the puck behind the net, turning the corner for an attempted stuff on the short side while linemate KK, who played for Montreal the previous 3 seasons, was being mauled in front. Lorentz only had 2 shifts in the first only because of all the penalties and not being on either special team but was making up for lost time in the second.

The Canes were holding a clinic for faceoffs all night. By the games’ end, the Canes won a massive 72% in the circle with Staal and Tro leading the way with a combined 27 wins on 33 draws. Staggering.

I had a conversation with Cameron Hillis, a Canadien healthy scratch, and asked him how he was on faceoffs. When he replied, “I’m pretty good,” I told him he needs to get dressed. Great young kid and wish him a successful career.

Ian Cole got the Canes’ only penalty of the period, with the PK now making it 4-for-4 on the kill. Les Habs got called for 3 in the second, with 2 penalties that were bad enough to get coach Duchame shaking his head.

On the last powerplay of the period, Turbo had the puck low, tried to feed Tro on the corner of the crease with a defender making a good play of lifting Tro’s stick. Fishy jumped on the loose puck sending it back to Turbo. Turbo quickly passed it up to Slavo at the high slot who sent it far side to Martin Necas above the far circle. Necas took advantage of a fairway wide lane cross-ice to Turbo sending the pass over to Turbo but with choppy ice late in the period, the puck started to bounce.

Turbo wound up then went to his knee to get all of his stick blade on the puck which was on edge smacking it in for his second of the night.

You can rarely tell body language on the ice but the Canadiens were as flat at the beginning of the third as I’ve seen a team all season. A full 6 minutes into the period the ice in front of Raanta looked like it was still fresh from the Zamboni. The Canes didn’t take their foot off the gas keeping pressure on in all 3 zones.

On a broken play, Svech was on the right point, saw a lane then sent a wrister to the net that had more speed than the average slap shot. The shot went wide of the near side just missing the post by a layer of paint. Both teams calmed down on the penalties with each having just 1 in the period.

The Canes got their 3rd powerplay goal on the Canadien’s last penalty. The ‘second’ unit was on the ice and passing at will. Passes were quick and were usually done without holding the puck. KK had the puck in the mid slot with his back to the goal, knowing the defense was collapsing in passed up to Slavo at the top of the key. Slavo took a stride, faked a shot passing over to Svech on the near side.

Svech saw Jarvis all alone on top of the far circle and quickly passed cross-ice through a wide lane with Jarvis cradling the pass putting it on the toe of his stick wristing it top shelf for the final score.

Late in the period, Tony DeAngelo got called for holding that Raanta had concerns over protecting his shutout. The PK made sure the shutout was preserved with Raanta only making one save during the man-down situation. Special teams went 5-for-5 on the PK, 3-for-5 on the PP and a shortie. A great night which begs the question: what happened to the 5-on-5 play?

The next home game is Jan 7 against Calgary and a few former Canes. Be there!

January Shows at The Cary Theater
Scroll to top