Cary, NC — After having an abbreviated but successful swing through Western Canada, the Canes, well most of them, returned to the USA only to have their game against the Minnesota Wild postponed due to a Covid outbreak amongst the team.

After winning in Winnipeg, Calgary and Edmonton, just 30 minutes before the game in Vancouver, Sebastian Aho said he wasn’t feeling well and then it happened. Fishy was out during a great road trip with 2 goals in each of the 2 previous games. Vancouver was just playing their 3rd game under new coach Bruce Boudreau.

Despite some talented players, the Canucks had been having a horrible year until the arrival of Boudreau. The Canes lost that game (Vancouver has yet to lose under Boudreau) then right after, rookie Seth Jarvis and a member of the Canes staff tested positive for Covid with all three being forced to stay in Canada. Over the next 24 hours, 4 more Canes tested positive which forced the cancellation of the Minnesota Wild game.

There’s a goofy NHL rule that forces a team to play short before postponing games. So goofy the Canes were allowed to pass on the Wild game but had to call up 3 players from the Chicago Wolves to field a team albeit just 18, not the full 20 on a roster, to play the Red Wings.

So the game went on and what an exciting first period. Possibly not so exciting for either goalie but very exciting for the fans. Just 12 seconds into the game Red Wing bad boy Tyler Bertuzzi got caught for hooking.

With Aho, Andrei Svechnikov and Jordan Staal all out, the powerplay is missing some key components. Not to worry as Nino Niederreiter was quick with the hands knocking in a rebound off a shot by Jesper Fast after a good-looking pass by callup Andrew Poturalski for his first NHL point in 3 games. Poor coverage and a mental lapse by Frederik Andersen enabled the Wings to tie the game 3-½ minutes later.

With the puck loose behind the net, Sam Gagner scoped it up going around the goal, turned towards the goal and seeing Andersen leaving the post open sent a quick wrister short side that Andersen knew immediately wasn’t a goal he wanted to give up. It took all of 2 minutes for the Canes to get on top again. It started with Tony DeAngelo pinching in along the far boards to win a battle to keep the puck in the Bolt’s end.

Teuvo Teravainen, behind the net, skooched the puck along the dasher board to Jaccob Slavin. Slavin, the ever smooth cerebral player, made a quick look to the slot, saw nothing then passed up to Fast filling in on the point. Fast quickly slammed the puck to the blue crease about waist high with Jesperi Kotkaniemi going for the tip in but hit the puck on the bottom rather than the top ( the game is that precise) causing the puck to flip over the goal, hit the glass going out to the right side with Tony D racing down and smacking the puck on its edge into the net for his 5 the of the season and in his first game in 2+ weeks due to Covid protocol.

Dylan Larkin tied it 6-½ minutes later on a breakaway off a feed from Lucas Raymond. The Canes had great control in the Wings end but a bad pass led to a turnover allowing Raymond to hit Larkin. Andersen almost made an impressive save but couldn’t squeeze the pads together fast enough. Late in the period, the Canes went up by 1 again when Jack Drury, playing in his first NHL game, making him the 17th Cane to score in his first NHL game, scored.

It started when Turbo cleared the puck from the Canes end into the Bolts zone. KK used his speed to get to the puck first ahead of 2 defenders, then made a slick reverse move, saw Drury racing over the blue line centering a hard pass that Drury thought about a deke, but chose to shoot. Former

Canes goalie Alex Nedeljkovic made the chest save with Drury, smartly following his shot putting the rebound over Ned’s left shoulder for a memorable first goal. Fun watching period.

Detroit has a loyal following in this area and had a good amount in the 16000+ in attendance. Unlike a few other unnamed cities, their fans were on their best behavior and here to enjoy what turned out to be a very entertaining game on Star Wars night. ( I’ve always thought having a Star Wars night during the playoff on May the 4th would be clever, ‘may the fourth be with you’).

Even with the score at 3-2 after the first, despite the depleted bench, the Canes dominated the period. I’d have to say the Wings had the advantage in the second with too much play being in the Canes’ end for Rod Brind’Amour’s liking. On a play that looked like a mental breakdown that didn’t get a clear, Larkin had the puck with time just outside the slot side of the circle with Andersen yielding nothing.

Larking passed to Bertuzzi on the left side of the net that Andersen had covered, so Bertuzzi did his Martin Necas impersonation going around the net for a backhander. Andersen got over in a flash making the improbable pad save with the ref behind the goal motioning no goal. The folks in Toronto who watch every angle of questionable shots/goals called the officials box for a ref review.

The overhead camera clearly showed the puck going over the goal line about 5” then Andersen kicking the puck out. No fault on the ref as he was in the proper decision and was blocked for the best view. Not even the Wings bench was yelling for a review as it all happened so fast.

With the game tied at 3 going into the third, it was a no-brainer to feel that the next goal would be crucial for a win by either team. Could have been the rest during intermission that the Canes needed as they came out on fire and with a purpose to start the third.

Brett Peace, like DeAngelo back for his first game in 2+ weeks, used muscle and a quick stick to push the puck to the corner in the Canes’ end. Necas got to the puck first and seeing the mass of bodies in front of him, 9 ironed a shot from the corner to the neutral zone. Nino had a step on his man, went down the far boards and saw Ned off the near post wasted no time to ping the puck off the right inside post going behind Ned into the net for his second of the night just 18 seconds gone in the period.

Ned’s positioning may have been something that Nino observed in practice last year and deposited it to the memory bank. Being early in the period, the Canes still were looking for that extra cushion of a 2 goal lead. No sitting back or sending one forward deep.

It was aggressive Rod-style hockey and with all forwards putting in some serious minutes, no one was showing signs of any fatigue. Forechecking was aggressive, and how Rod played the defense was masterful. Slavin has been putting in close to 30 minutes a game but played just under 24 this night. Pesce, just back and a crucial element to defense, also put in just under 24 minutes with the rest of the D- corps all playing respectable time.

With the two best face-off players out, Fishy and captain Jordan Staal, surprisingly, the Canes dominated in the face-off circle. Vincent Trocheck, who is also excellent on faceoffs, took the most while rookie Drury won 3 of the 4 he took for an impressive 75%.

With under 3 minutes to go, the Bolts pulled Ned for the extra skater. With a scramble for the puck in the neutral zone, Nessy got the puck slightly above his blue line sending it down the ice for a breather and expected icing call. Turbo turned on his jet to outrace Bertuzzi getting the puck in the far corner making a slick 4’ pass to Tro who nonchalantly went forehand, backhand softly into the empty net with 4.8 seconds left.

In a conversation with injured Jordan Martinook, he’s not even skating yet so that lower-body injury (possibly ankle) he may not be back until January. Hopefully, he’s joining the team in the locker room before the game as he is, no doubt, the one that makes the team get up for games. 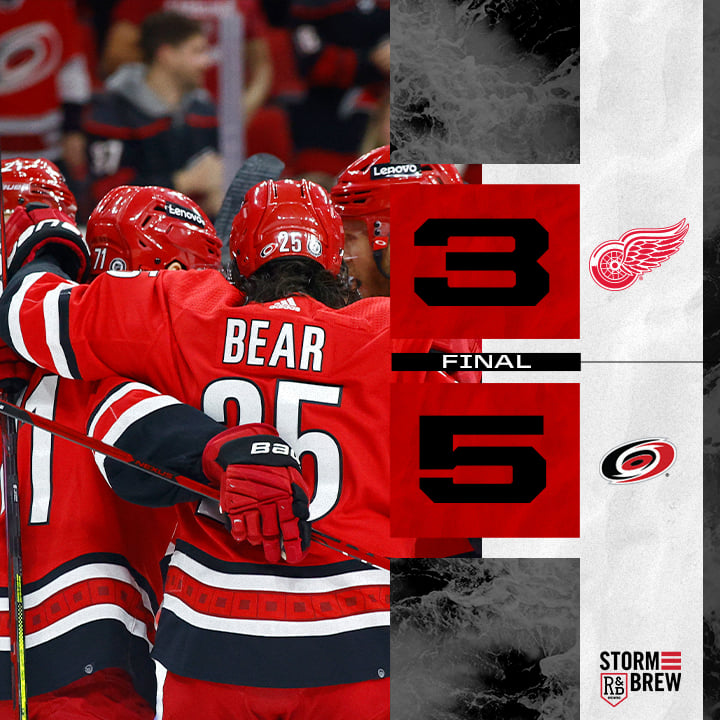 The Storm Surge had the Canes fighting with Star Wars lightsabers to cap off a very enjoyable evening. The next game is Saturday against the Los Angeles Kings who just beat the Panthers. Puck drop at 7, be there!