Cary, NC — As the pandemic nears the end of its second year, let’s take a look at its current status in Cary, Wake County and the state, including the December 10 detection of the Omicron variant in NC.

According to the NC Department of Health and Human Services, there are 102 people currently hospitalized with COVID-19 across the county and the rate of tests returning positive is an estimated 5.1%.

Wake has also reached a new milestone of residents reaching 70% fully vaccinated — this represents over 775,000 people. Since the first-ever detected case in Wake County, the cumulative positive case count is at 138,937, and from those cases, 913 deaths have been reported. 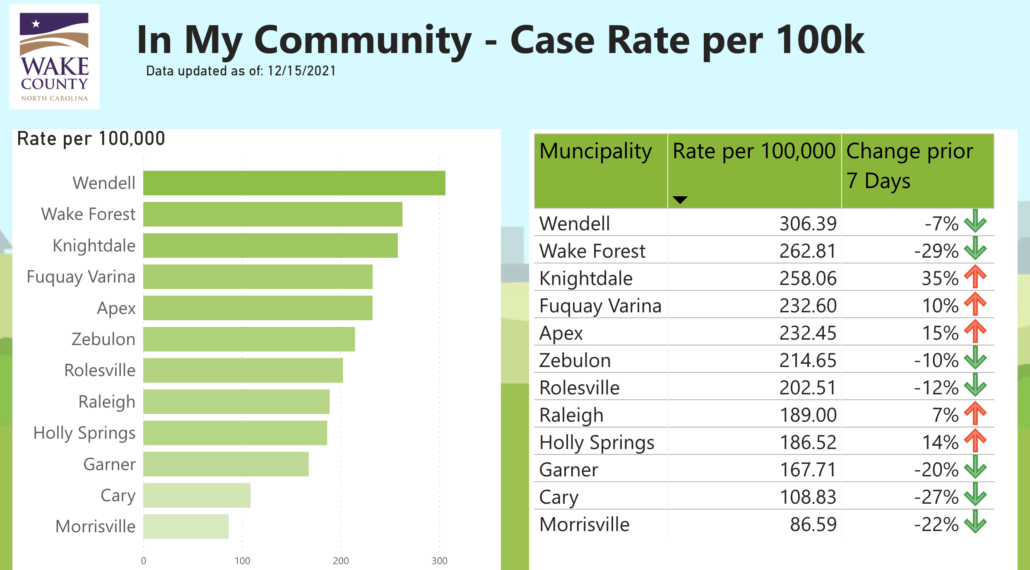 According to municipal data from the NCDHHS, Cary continues to report some of the lowest cases per capita (per 100,000 residents) of the 12 Wake County municipalities.

Currently, Cary’s cases per capita are at 108, a 27% improvement over the last 7 days. The neighboring municipality of Morrisville is the only one to report fewer than 100 per capita at this time. Others such as Wendell and Wake Forest are reporting 262 and 306 cases per capita.

For all municipal data, visit the NCDHHS Municipal Data Page.

In a COVID update for the state, NCHHS Secretary Dr. Mandy Cohen said community transmission rates across the state, except for only 4 eastern counties, are at the most severe level of transmission which she called, “the red zone.”

The highly mutated omicron variant of COVID-19 was first detected in North Carolina on December 10, prompting concern among public health experts. As of now, Delta continues to be the dominant variant in North Carolina, making up nearly all newly reported cases. Cohen added that most of these new cases are being identified in children and young adults who are less vaccinated than older populations.

Across the state, Governor Cooper said in a news conference Tuesday that cases, hospitalizations and ICU patients have been on the rise since the Thanksgiving holiday. Heading into the 2021 holiday season where many will gather in and out of state, Cohen said, “People can safely gather if they are boosted, tested and wear masks.”

Just after the 2020 holiday season, in January 2021, the state saw the absolute worst of the pandemic and that time remains the most deadly time on record. The important differentiator to remember is that vaccines, which remains the best way to prevent COVID-19, were not widely available a year ago the way that they are now.

Making headlines across national networks is the U.S. death toll which now stands at 800,280. In addition, the country has averaged 1,190 new deaths per day over the last four weeks, according to Johns Hopkins. Nine large, hard-hit states account for more than half of those deaths, according to figures from the Centers for Disease Control and Prevention. These include: