Cary, NC — The Canes returned home after a long road trip to face the Washington Capitals in a showdown for first place.

The Canes had a very successful road trip coming back with 9 out of a possible 12 points, going 4-1-1, with an overtime 2-1 loss to the San Jose Sharks, a 2-1 regulation loss to the new Seattle Kraken and a solid 6-3 win over the Flyers.

While both the Canes and Caps (along with the Rangers) have 31 points, the Canes entered the game in first place as they’ve played less games and have more wins. In their first meeting in nearly 2 full years, the game was all it was hyped to be with the Caps coming out on top 4-2, taking over sole possession of first place. The Canes have still played 2 fewer games but it’s nice to have the points where they count. 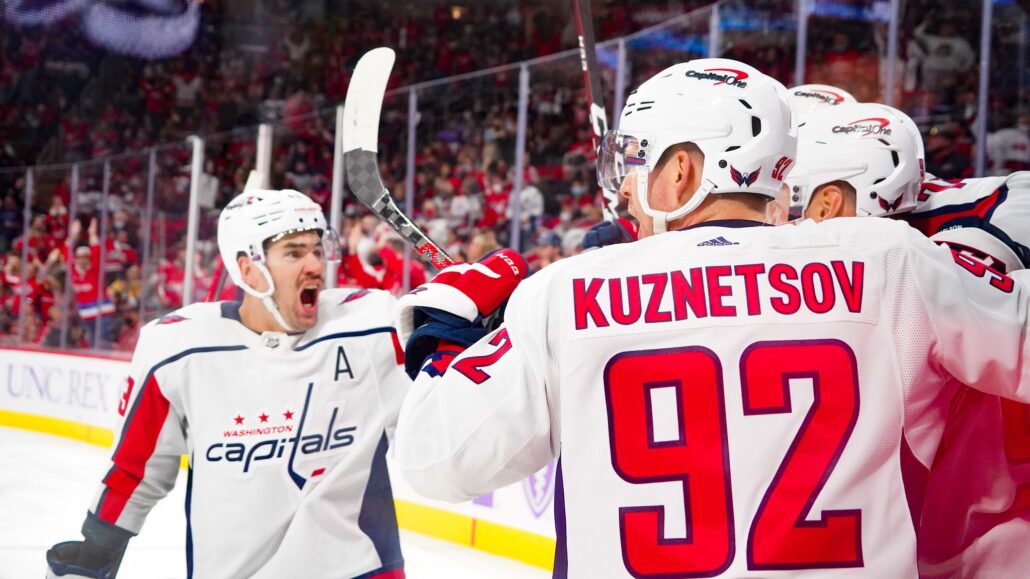 Former Canes player Trevor van Riemsdyk was playing his first game against the team he played on for 3 seasons and had a nice game overall playing just under 16 minutes. One of those good news/bad news facts was that he was on the ice for both of the Canes’ goals. For two very structured teams, the first period started off sloppy and almost saw the Canes score on the first shift.

Sebastian Aho won the initial draw and after some flip-flopping of the puck in the neutral zone, Brady Skjei rimmed the puck deep into the Caps’ zone. Caps goalie, Ilya Samsonov, who has not lost a game in regulation yet this year, mishandled the puck allowing Fishy a quick shot from a bad angle off the sideboards to a fully open net, but Eugene Kuznetsov provided enough pressure that didn’t allow Fishy to aim properly.

The Aho line, with Teuvo Teravainen and Martin Necas, had a great first period and a great game overall using their speed and skill but likewise, the Caps top line of Alex Ovechkin, Kuznetsov and Aliaksei Protas is just as skilled, nearly as fast and uses their size, an average 35 pounds heavier, to their advantage.

Ovi is from another planet. He’s 36 years old, still has a lethal shot, still delivers one of the hardest checks in the league, still goes 100% on every shift and still is as competitive as anyone. When on the ice at the same time, he’s the #1 concern for either Brett Pesce or Jaccob Slavin.

The Canes powerplay of late has been pretty powerless and on the 2 powerplays they had in the first, the only word that comes to mind is “unassembled.” Neither PP unit was not even close to sharp. Credit the Caps defense a little but the Canes have now gone 5 games without a powerplay goal and equally important, very few scoring chances. Both the powerplay and 5-on-5 for the Canes looked as if there was one pass too many when a shot should have been taken.

One of the oldest Canes fans around, 92-year-old Mr. Emerson, says there’s a certain gender wired differently and similarly, there are some Canes that are wired more for the pass than the shot when most, if not all, have great shooting abilities. The Canes did stay out of the box in the first which is one big accomplishment even though the Caps aren’t in their usual position of a top PP team, yet, this season. 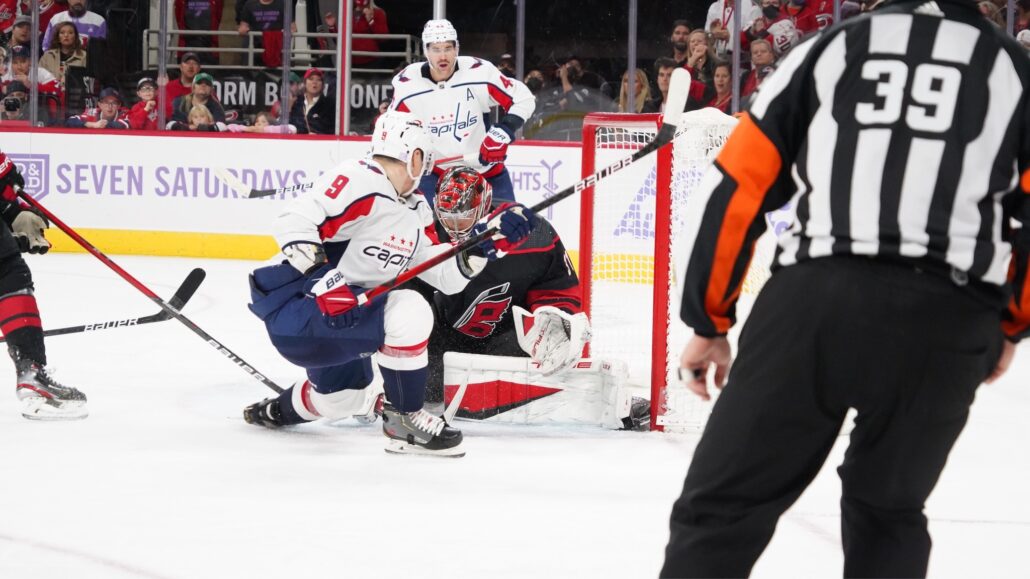 The second period started off with a very questionable penalty with a hooking call against Turbo. Even after seeing the replays, it was hard to see what the refs saw on the ice.

The Caps powerplay has more firepower than most teams with one secret weapon that is no secret: Ovi. The only time Ovi is not on the ice during a powerplay is if the puck is on a clear near the end. In the 8 minutes of PP time the Caps had, Ovi was on the ice 7:43. Why not, the guy is a scoring machine.

The Canes killed off the Turbo penalty with Frederik Andersen making a few key saves, one time having Ovi looking up towards the scoring gods. Midway in the period, the Caps had a pretty give and go that resulted in a goal. Dmitry Orlov had the puck up on the left point passing to public enemy #1, Tom Wilson.

With Orlov getting around Jesper Fast, Wilson returned the pass with Orlov going down Broadway right to the net. Pesce had to leave coverage on Ovi to stop Orlov but Orlov slid the pass to his left where Ovi got just enough of a missed shot to allow the puck to slide in for the 1-0 score. Just under a minute later, the Caps had the puck in the Canes end appearing to rim the puck at will along the boards.

Protas snared the puck along the near boards, looked up seeing Kuznetsov at the top of the crease sending a hard pass that hit Tony De Angelo’s skate about 10’ in front of the net going in for a quick 2-0 lead. Late in the period, Skjei got called for an interference penalty, which again, might be a penalty by the book but had no effect on a play.

While in the box, Wilson slashed at Andersen just as he made a save, and Brendan Smith took exception with grabbing Wilson, I’m sure politely saying that wasn’t a nice thing to do. Only due to momentum, both players fell to the ice while entangled with the other player’s sweater. It was there, I’m sure, that Smith was saying slashing a goalie isn’t within the rulebook, when Wilson, flat on his back on the ice started throwing punches. In the end, both went off for just two minutes with no damage on the ice by either team.

Kotkaniemi and Niederreiter Light The Lamp

If the Canes were to make a comeback, they would need to score early as Washington is coached by the Canes Stanley Cup coach, Peter Laviolette, and he knows how to keep and win with a lead.

Once again the Canes found themselves a man down when Skjei got his second, weak in my opinion, penalty of the game, this time holding. Skjei is a big part of the man down defense but Slavin, Pesce and Ian Cole were all playing big on the PK but maybe when it’s fellow D-man, their efforts are just that much more, which all will deny.

The Canes got what they needed and scored early.

Tony D had the puck behind the Canes goal waiting for the complete line change then sent the puck off the near boards at the red line. Jesperi Kotkaniemi beat his man to the puck skooching it up along the boards to Jordan Martinook at the Caps blue line, then KK went to the middle. Marty won his battle, eyed KK all alone with time and space, made a nice pass and with plenty of time, picked the upper right corner to cut the lead in half.

A few minutes later the Canes had a golden opportunity to tie the game as Fishy was able to draw the Caps into another penalty. If the Canes PP was to come back to life, this was it. For the first time in several games the powerplay looked organized and was creating good scoring chances.

I still didn’t see much net front presence but the passing, and more importantly the shots were there. Late on the PP, with the second unit on the ice Necas had the puck at the left point, mishandled a pass that led to a turnover. Nessy made up for the turnover, catching the puck deep in the neutral zone, putting it on his stick with just seconds left in the powerplay.

Nessy carried the puck over the Caps blue line on the far side, thought about a turn to the goal but didn’t have the daylight needed instead passing up to Pesce. Pesce passed right back to Nessy who saw Nino Niederreiter coming down Broadway all alone then made a pass to his tape that Nino, learning off KK’s goal, hit the upper right corner with the powerplay ending 2 seconds earlier.

At the 15 minute mark, Seth Jarvis had no choice but to hold Nick Jensen as he was barreling down on Andersen all alone resulting in a Caps powerplay late in the game. The Canes had a dagger of a call 30 seconds into that penalty when Aho got called for slashing. Yes, it was a slash as he broke the Caps player’s cheap plastic stick, but the infraction had no bearing on the play as Slavin was making a clear. That gave the Caps a full 90 seconds of 5-on-3 late in the game.

After killing off the front end of the 2 penalties, Orlov was all alone on the corner of the goal easily redirecting the puck in off a pass from Wilson. John Carlson added a goal in an open net when the Canes added the extra skater. Tough loss all around. Canes need to work on better setups on the powerplay. Special teams have always been a trademark of the Canes and they need to find what made their early-season a success again.

The next home game is Thursday against Ottawa. Be there!

Local Nonprofits to Remember This Giving Tuesday
Scroll to top