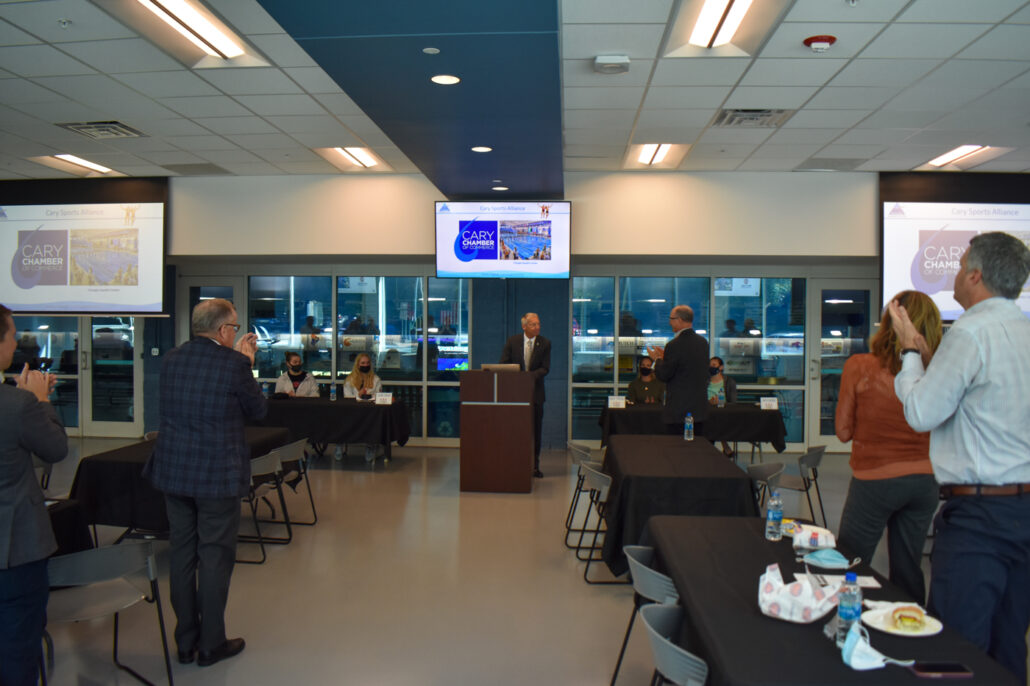 The panel included Paralympians Morgan Stickney and Hannah Aspden as well as Olympians Katie Zaferes, Ashley Twichell and Claire Curzan, all of whom live and/or train in Cary in their respective sports of swimming and triathlon.

The meeting kicked off with a proclamation reading from Cary Mayor Harold Weinbrecht to acknowledge the athletes’ achievements, most recently in the Tokyo Olympic Games. Mike Curran, the Executive Director of the Triangle Aquatic Center (TAC) also provided some comments to provide a brief history of the center and the role it has played in helping athletes reach their Olympic dreams.

Almost 20 years ago, TAC was started with a few Triangle parents who saw the need for a year-round public aquatic facility. A year later TAC was incorporated as a nonprofit organization and acquired a plot of 21.5 acres where the facility was built years later.

Now, TAC has become known nationally as the largest nonprofit public aquatic facility ever built in the country without any tax funding — a complete community effort. This year TAC sent a total of 14 swimmers to the Tokyo Olympic trials and the TAC Titans swim team was recognized this month by the governing body of USA Swimming as the number one swim team in the country.

Following Curran’s comments, the five medalists taking part in the panel discussion were introduced, each having the chance to share a bit of their Olypmpic story and answer questions from the meeting’s attendants. 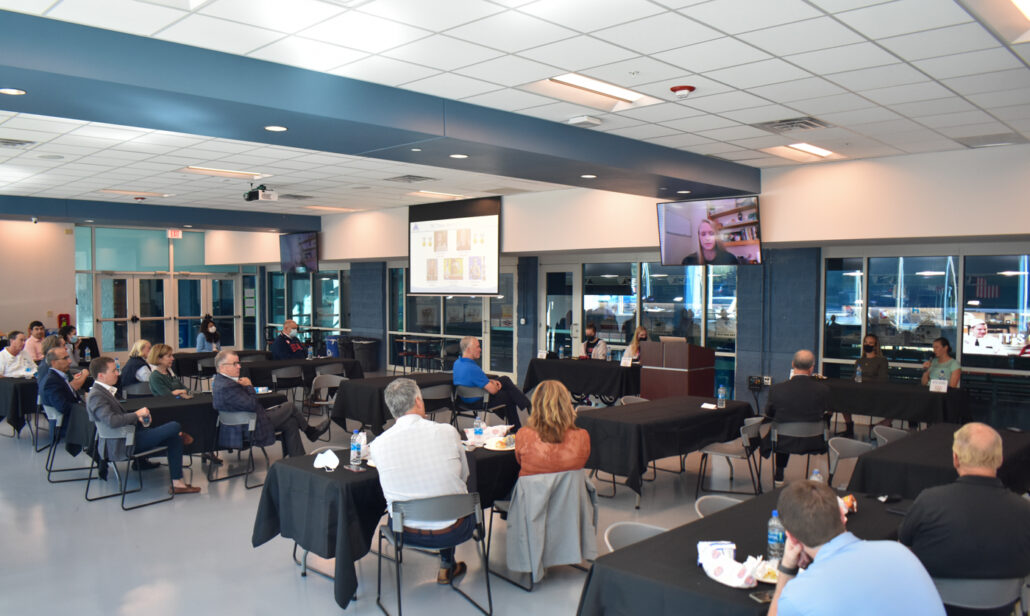 Hannah, 21, grew up in the Triangle and began her swimming journey at age 8 for the YMCA of the Triangle. She is a 2-time Paralympian, competing in both the Rio 2016 and Tokyo 2021 Games. In 2016, she won two bronze medals in the 100-meter backstroke and in the 4×100 medley relay. In Tokyo, she went on to win gold in those same swimming events.

She is now in her senior year at Queens University in Charlotte, where it appeared she was Zoom video calling from to join in the discussion. Speaking to her time at Queens, she says she does her best to advocate for paraplegic inclusion in collegiate-level sports. On the topic of Tokyo, Aspden said,

“Just being able to have the games this year and get a chance to compete was a blessing by itself.”

One of her favorite moments from the 2021 Paralympic Games she shared was the moment the U.S. flag was raised and the national anthem started to play following her victories.

“There’s nothing quite like that overwhelming feeling of pride and honor and pure joy that I felt in that moment,” she said.

After graduating, Aspden says she looks forward to returning home to Cary where she intends to train for the 2024 Olympic Games. 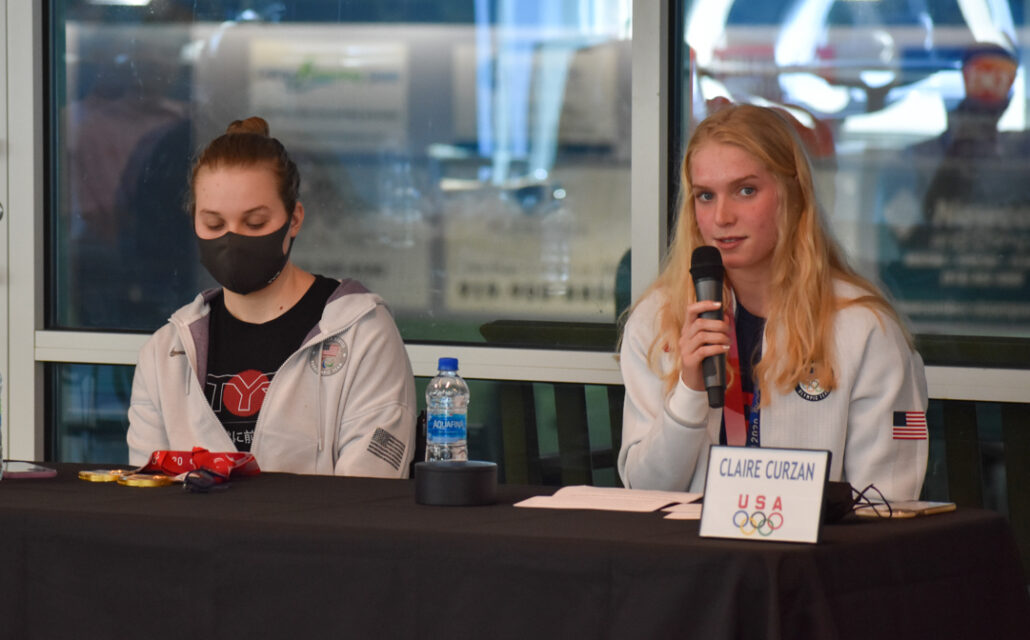 Claire Curzan, 17, was born and raised in Cary and was one of the youngest Olympians representing the United States in the Tokyo Olympics. She attends Cardinal Gibbons High School and started her journey of swimming with the TAC Titans when she was 10 years old.

Curzan, who also shares a birthday with swimming legend Michael Phelps, came home from the Tokyo Games with a silver medal in the 4×100 medley relay and also came in 10th in the 100-meter butterfly.

“Being in the [Olympic] Village and seeing the flags of all the countries competing and hearing all the different languages just made it so real that I was there,” she said of her arrival to Tokyo.

A special tradition of Team USA, she shared, is trading pins with athletes from other countries that they meet. Her favorite pin was one that had a pair of little orange shoes on them from The Netherlands.

At competition time, Curzan said it was a big comfort for her to hear fellow USA athletes cheering from the stands. Looking forward to her future, Curzan has committed to attending Stanford and said “absolutely” to competing in the next Olympic Games in Paris. 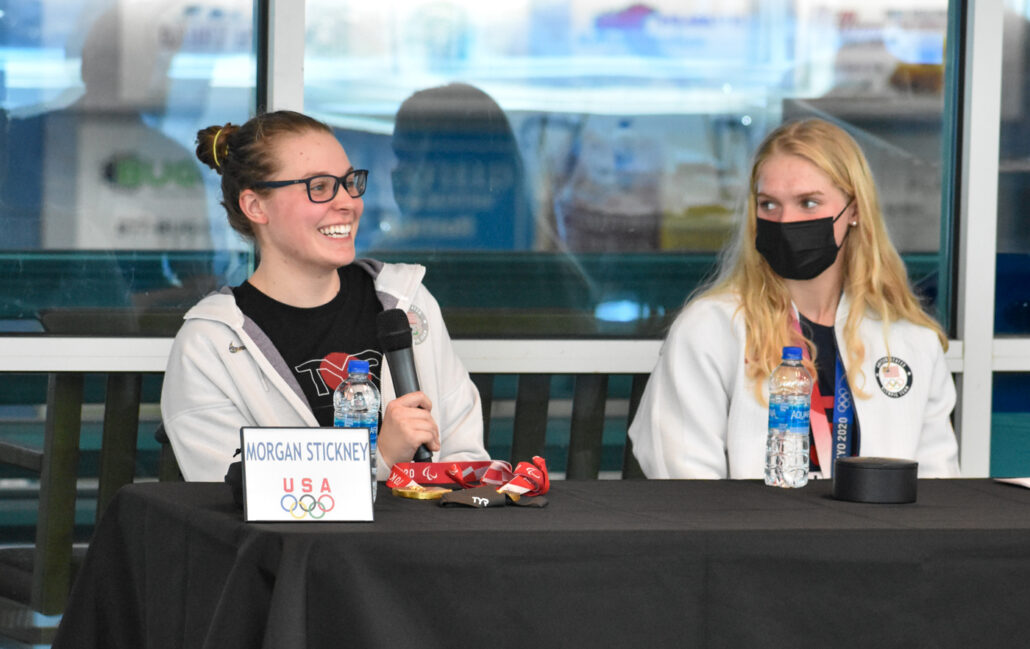 Morgan Stickney, 24, grew up in Bedford, New Hampshire and now lives in Cary. At age 15, Stickney was among the top 50 swimmers in the country for the mile. At that time she was an able-bodied athlete with both her legs. She then sustained an injury to her left leg and after a 6-year-long battle, the leg could not be saved and was amputated below the knee.

She went on to keep swimming, reaching the status of National Champion. The next month she shattered her right foot and soon after found out it is due to an extremely rare vascular disease that’s never been seen in the U.S. before. The leg had to also be amputated, making Stickney a bilateral amputee.

Just two years after that second amputation, Stickney went on to win 2 gold medals in the 2021 Paralympic Games in the 400 medley freestyle and the 4×100 medley relay.

“TAC has been a huge part of this journey and I honestly would not be where I’m at today without everyone here and I’m so thankful,” said Stickney.

On her time in Japan, she said it was her first time flying out of the U.S. While at the Games, she also cherished the moments on the podium with the National Anthem playing. “Standing on that stage knowing you’re the fastest in the world—there’s nothing that compares to that.” 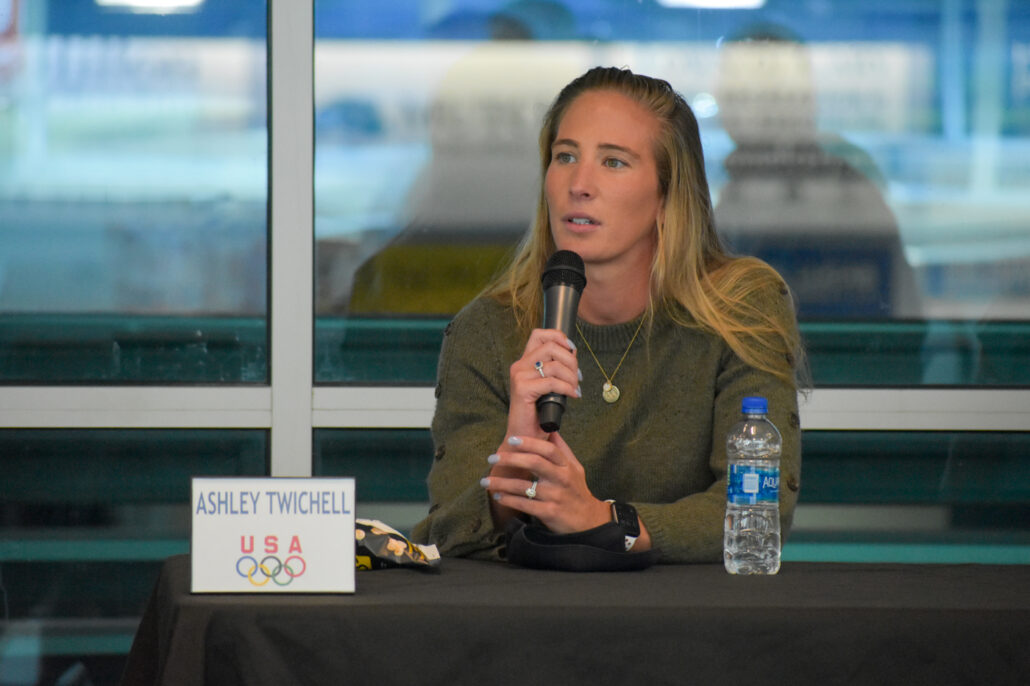 Ashley Twichell, 32, grew up in Fayetteville, New York in a family full of swimmers and attended Duke University. She now lives with her husband Derek in Apex.

Ashley swam a 10K open-water event in Tokyo, which was explained by Curran as a grueling, two-hour all-out swim in open water where she finished 7th. After the two-hour race, there was only a 7.1-second difference between first and seventh place.

“After the past year and a half, you know everyone that was there was affected by this pandemic in one way or another, so to have everyone there together competing was really, really special,” said Twichell.

Though her finish to the race was not exactly what she had wanted, she says her Tokyo experience was incredible and one that she’s very thankful for. 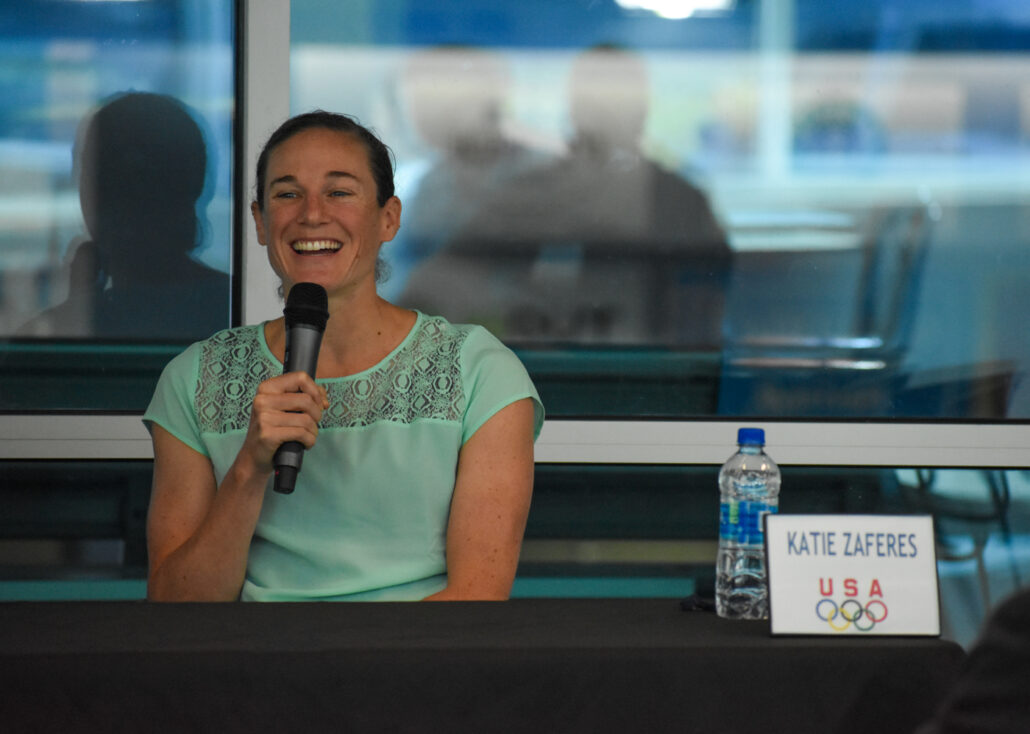 Zaferes, 32, grew up in Maryland and studies at Syracuse University. She is a two-time Olympian, competing in the Rio and Tokyo Olympics. This time around, Zaferes earned the bronze medal in the women’s triathlon event and, just 5 days later, she earned her second medal alongside 3 other USA triathletes as they took the silver in the first-ever Mixed Relay Triathlon in Olympic History.

Her Dad passed away in April this year, which Zaferes said threw her for a loop in a time where she had not yet qualified to go to Tokyo. Following a tough few races, including one where she crashed and was hospitalized, Zaferes was selected by USA Triathlon to go to the games in the discretionary spot on the team.

She was lucky enough to have her husband there for the games as he was working as a hired photographer at the Olympics for Team USA.

“I got to see him as I was crossing the finish, which was really, really special,” Zaferes said. Another special moment also came for Zaferes when she noticed a rainbow in the sky during the bike portion of the race.

“To me, that was my indication that my Dad was there watching,” she said. 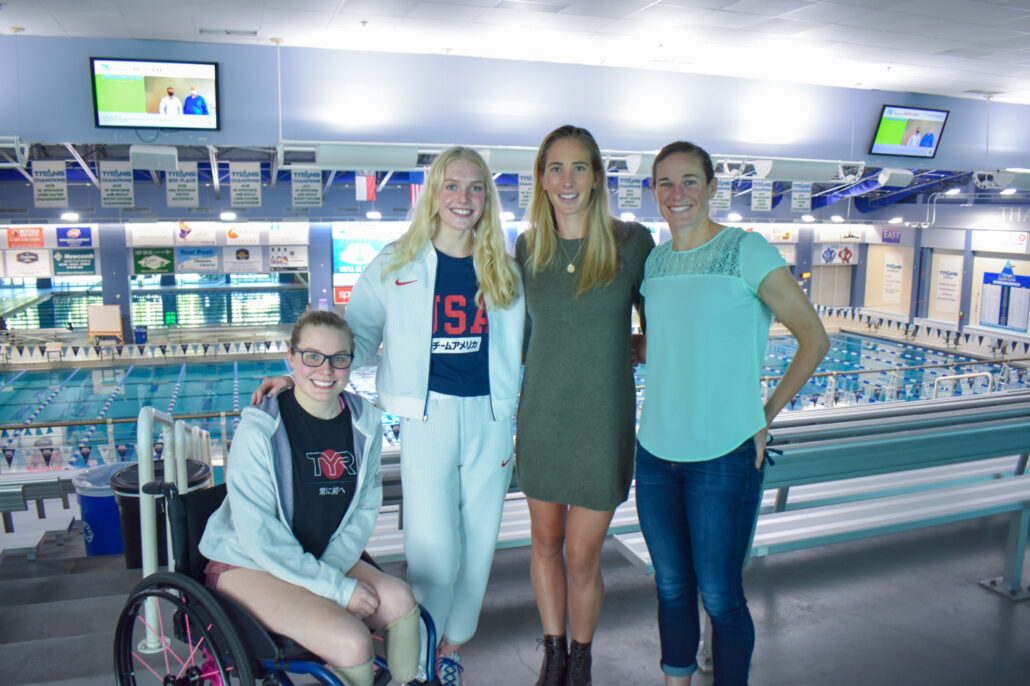 From the Archive: The Ghost of High House
Scroll to top