Cary, NC — It may only be a preseason game but both the Canes and the Tampa Bay Lightning have such deep talent in their prospects which made this game feel more like a midseason game.

Both teams had only 8 veterans dress for the game, which I believe is the NHL minimum for a preseason game. The Canes scored 2 powerplay goals leading the way to a 3-1 win over the defending Stanley Cup champs. There is a rematch on Friday in Tampa Bay which will have both teams staffed with 20 different players, possibly adding a couple more veterans. 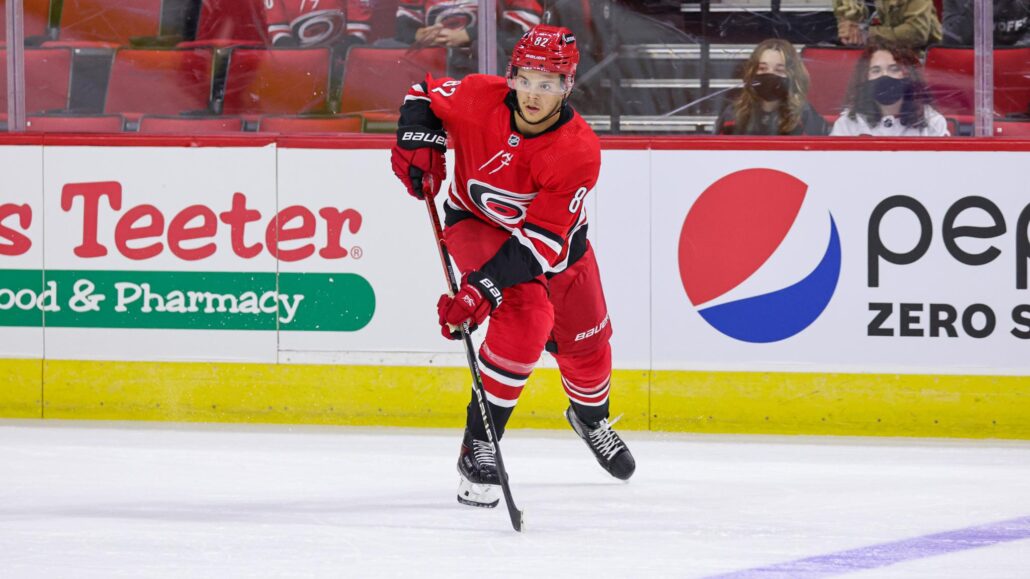 Unlike several years ago, when there was a noticeable difference in preseason play compared to regular-season games, this game was of a NHL regular season caliber all around.

One of the highlights to me was how the Canes owned the faceoff circle winning a shocking 72% against a historically excellent faceoff team. Vincent Trocheck won 13 of 18, newcomer Derek Stepan won 12 of 18 and Jack Drury won 10 of 15. Every Canes taking a faceoff won at least 57% of their draws. Rod Brind’Amour has to be very pleased with that.

A second highlight was the powerplay. The Canes were quick and aggressive on the puck, had crisp passing and positioning was solid. Not by accident, but darn if the powerplay didn’t look exactly like Rod had it drawn up at practice.

Third impression was that the penalty kill was also very good. Tony DeAngelo is not only a step faster than Dougie Hamilton, he plays with an edge. He’s a very smooth skater. In fact, that’s another impression of both teams.

Every player on both teams had NHL skating ability. In the past, there were always those 2, 3, 4, or 5 players you could notice the obvious difference in skating or stickhandling skills. The prospect pools of these 2 teams is deep. So deep, I believe there were at least 5 scouts watching this game. 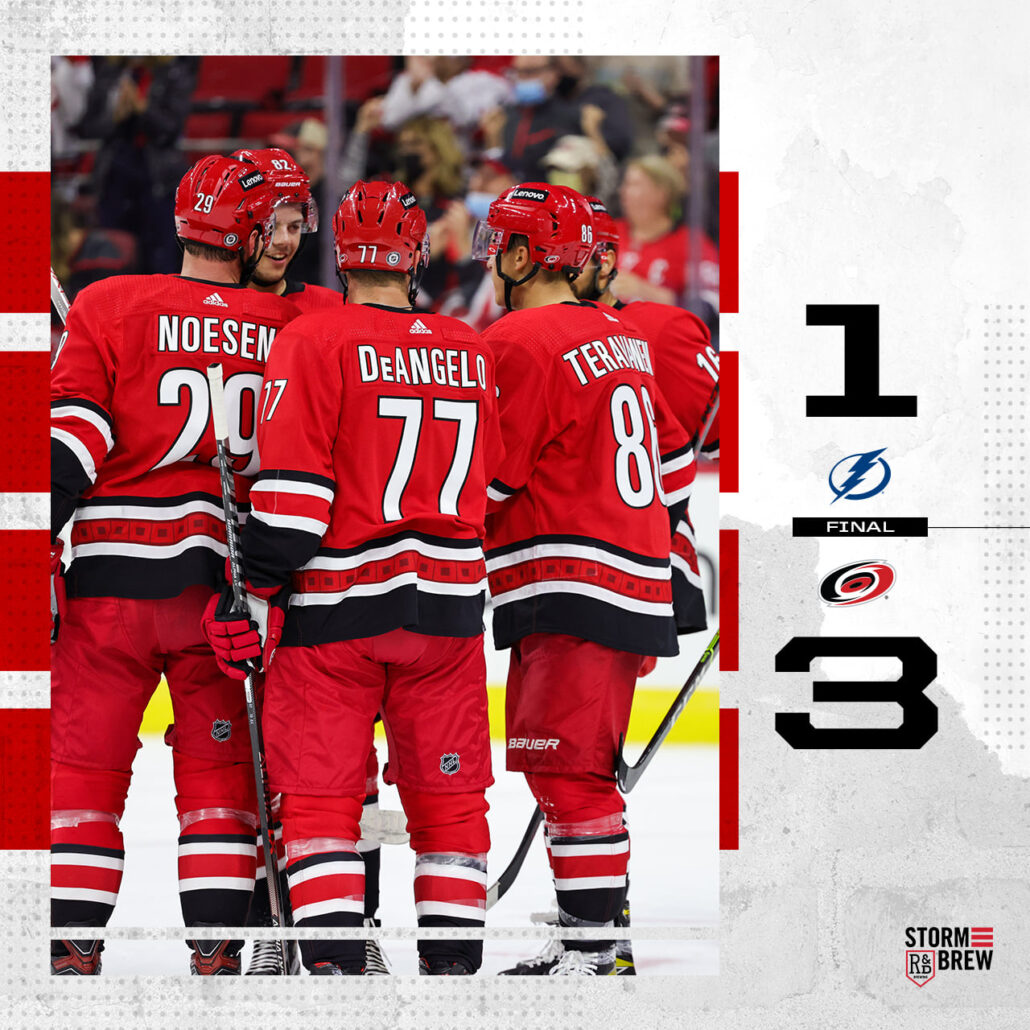 The Canes’ Jesper Sellgren had the first penalty of the game on an interference call right after a faceoff. The PK units were excellent: fast on the puck, not giving an inch in the dirty area in front of new goalie Frederick Andersen.

Both Ian Cole and Joey Keane were beasts on defense with Cole doing to the Lightning what he did to the Canes forwards for years—nasty but legal. Right after the penalty kill, the Canes got on their first powerplay.

The Canes scored on a beauty of a play with Teuvo Teravainen up on the left point, passing down to Trocheck to the left of the goal with Troch making a slick cross ice pass to the Canes’ $6 Million Man, Jesper Kotkaniemi, who goes by the nickname KK, snap writing a one timer into the far upper left corner. Welcome to the Hurricanes!

Late in the period, the Canes got a second powerplay and wasted no time converting to make it 2-for-2 on the man advantage. Not saying it was an identical play, but darn if it didn’t look that way. KK had the puck down low passing up to DeAngelo up high, who carried the puck to the center then passed over to Turbo in the far circle. He, like KK, snap wristed a smooth shot into the far upper corner for the 2-0 lead to end the first.

Some of the prospects seemed to have some great chemistry on and off the ice. Jamieson Rees and Drury seem to be close off the ice and they seem to know each other’s moves on the ice. Rees carried the puck into the Bolts’ end with a defenseman all over him but flicked a self pass off the boards that he picked up behind the Bolt player took a quick look left seeing Drury raise his hand as he sprinted to the goal.

In one swift motion, Rees delivered a perfect pass with speed and the accuracy of a surgeon to Drury’s stick just as he crashed the backdoor of the net to redirect it in for the solid 3-0 lead. The Bolts got on the board a short time later with a rare defensive lapse for the Canes. 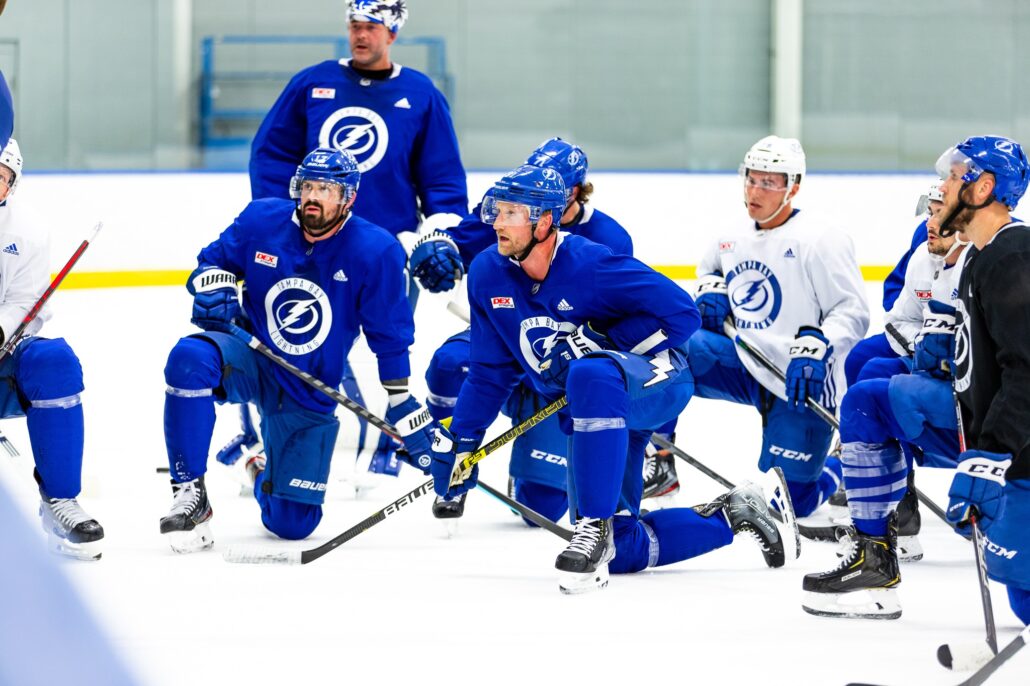 With the play in the near corner, 3 Canes were trying to overpower 2 Bolts but Boris Katchouk was able to center a pass to Alex Barre-Boulet all alone 5’ in front of the goal to swat it in for the lone Bolt goal.

Andersen was left out to dry on that shot but you could still see by his body language he wanted a second chance on that shot. Not 3 minutes later, the Bolts had a 3-on-1 and this time Andersen came up huge, gloving a shot that seemed destined to hit the back of the net.

Besides Drury looking very good, Nick Suzuki, Josh Leivo, and Maxims LaJoie all look solid. The Canes clearly have some prospects that are NHL ready. This team has all the ingredients to be very good, even beyond very good. Folks are saying it’s the goalie position that is the biggest question mark, and while that may be true, if both Andersen and Antti Raanta stay healthy and play other teams as they played against the Canes, the goalie position will be fine.

DeAngelo is going to be a steal. Getting a player of his caliber for $1 million is highway robbery. He says he’s a changed man, he deserves to prove it as he says he will.

Next home preseason game, with even more veterans, is next Tuesday. Be there!