Cary, NC — This week the council held a work session and its last regularly scheduled meeting of September.

Starting the Week with Meetings

Later Monday I met with staff to go over the agenda. We mostly talked about reading the proclamation for former council member Michael Joyce. Our meeting was brief.

Next, I met with the town manager for our weekly one-on-one. We talked about COVID-19 enforcement, vaccination rates, and trends we saw with hospitalizations and infections. Other topics included the location of the future Sports Complex and the sale of the South Hills Mall.

Monday night I joined a meeting of the Mayors Association in Garner. Mayors attending included Cary, Fuquay Varina, Garner, Morrisville, Rolesville, Wake Forest, and Wendell. Most of our discussion was on mask mandates and how it was appropriate for some communities and not for others. Our meeting lasted over two and a half hours.

Tuesday I joined council member Smith in a meeting with a Dorcas Ministries representative about an affordable housing project. We discussed concerns and funding partners. Our meeting lasted about thirty minutes.

Topics included the new multi-modal station and the location of Cedar Street in the railroad right-of-way. Our meeting lasted about an hour. 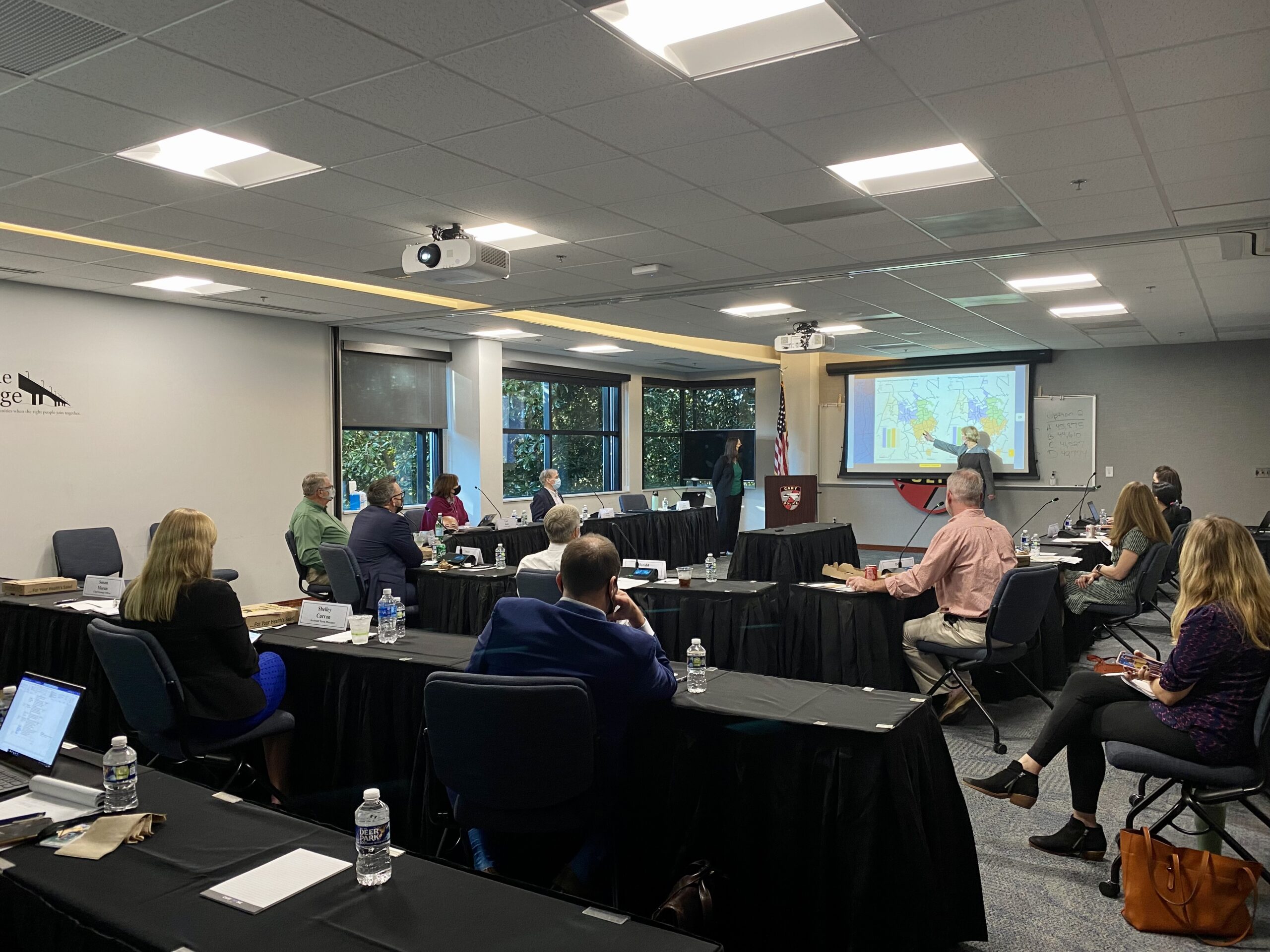 The branding update includes several logos from staff. The council stated that there was no wow factor with any of the logos. Staff noted that the direction given to consultants was to be safe with the logos. The council gave the staff and consultants direction to come back with a set of logos that are not as safe. This will probably be presented to the council at the mini-retreat in November.

The council’s last topic was redistricting. This past summer the council redrew and approved the districts to be in line with the rule that states district populations must be within 5% of each other. The census data showed that there needed to be some minor tweaking of those new maps to meet the 5% rule. Two maps were presented with the majority of the council favoring option 1. The council decided to present both options at a public hearing on October 21 before making a decision at a council meeting on November 9th.

The council held its last regularly scheduled meeting of the month Thursday evening. The meeting started with the council remembering former council member Michael Joyce who, along with his wife, passed away recently from COVID. I read a proclamation honoring his life and service to Cary.

The agenda included a history moment from council member Yerha, Public Speaks Out, and five consent items. The history moment focused on businesses in Cary. To find out more visit https://www.cary150.org/history-moments/ .

Public Speaks Out had one speaker, a candidate for Cary Town council, who was pitching a WakeOne mantra that all municipalities should give one penny of their tax rate to affordable housing. IMHO, throwing money at a complex problem without clearly defining the problem and the solutions is very bad policy. I encourage everyone to learn what Cary is already doing for affordable housing instead of assuming the worse.

Please remember that Cary is one of the greatest communities in the nation for a reason. Our staff and council are always working on solutions to complex issues. The best solutions usually come from careful planning and consideration.

After a closed session the council came back into open session and passed a resolution approving a Memorandum of Agreement between the state of North Carolina and local governments on proceeds relating to the settlement of Opioid litigation. I was contacted by the North Carolina Attorney General on Friday to confirm Cary’s participation.

Friday the North Carolina Metro Mayors met to discuss happenings at the legislature. Here is a summary of that meeting from the Executive Director:

Discussions may shift from one between the two chambers to one that also includes the Governor.

The meeting concluded after about half an hour.

Planting at the Cary Tree Archive

Saturday I participated in a tree planting at the Cary Tree Archive. Six of the seven council members were participating, as well as staff, firefighters, police, and other volunteers.

Together we planted native trees in an HOA common space. This will help clean our air, our water, and battle climate change.

The Tree Archive includes over 200 trees, a Longleaf Pine Savanah, a fruit and nut orchard, and a pollinator garden. We are so blessed to have this Tree Archive and all the volunteers that have worked so hard to create this special place. If you would like to get involved with the Tree Archive, go to https://carytreearchive.org. 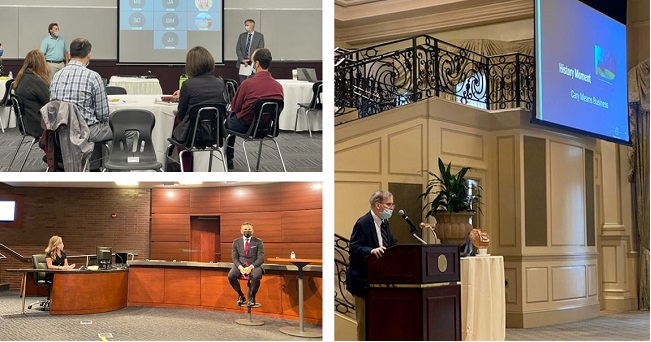 The first week of fall has been a busy one for Council, staff, and me. Each new season brings new perspectives on what lies ahead and if this week is any indication, we are in for a productive and engaging fall.

On Tuesday, I held an All-Hands meeting, and Assistant Director of 311, Carolyn Roman, joined me as we updated staff on the latest regarding COVID-19 and the Vaccine Incentive Program. As I mentioned last night in the work session, on Wednesday I had the opportunity to speak with the entire Development Review Committee about interpreting the Land Development Ordinance (LDO) and their role as regulators and facilitators.

In other news, Council Member Ed Yerha and Town Clerk Virginia Johnson did an excellent job presenting at the Cary Chamber Eye Opener. They are doing an extraordinary job encouraging others to celebrate Cary’s exciting history as we continue to celebrate 150 years.

See you all on Thursday evening for the Cary/Morrisville Meeting. 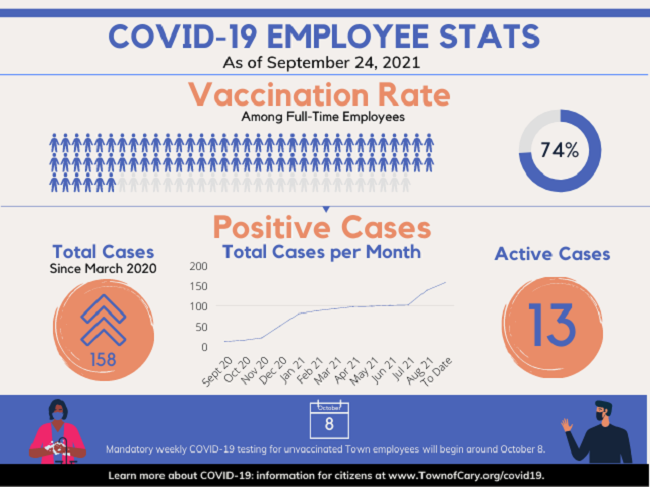 This month, the General Assembly enacted legislation that removes duplicative fees for beer and wine licenses in Cary. This initiative started with the Finance Department’s assessment of Cary’s fee practices to see what was not adding value to the organization. Beer and wine licensing generated minimal revenue, collected duplicative data with the State, and was an administrative burden for Cary and local businesses. Cary’s government affairs team worked tirelessly this session to ensure passage of the legislation. This is a win not only for Cary but for the entire business community. Read more about this legislation in House Bill 890 (Part IV).

A multi-departmental team is working with the Carpenter Village HOA to create safe walking conditions by addressing damaged sidewalks throughout the neighborhood. In most cases, the sidewalks are raised and cracked due to the growth of tree roots below the surface. Residents were torn between repairing the sidewalks and preserving the trees, so staff worked to identify solutions that would allow these conflicting amenities to coexist. The first repair was completed this week using a bridging technique. This method involved elevating the sidewalk with a gradual incline, allowing room for the tree roots to remain settled underneath. Nearby homeowners and the HOA expressed their appreciation for this initial repair and look forward to seeing similar improvements in other areas throughout the neighborhood.

In partnership with Verville Interiors, LLC, Cary is hosting a clean-up day in Hillcrest Cemetery on October 2 from 9-11:30 a.m. Proper cleaning methods will be demonstrated by Verville Interiors, LLC and volunteers will perform light cleaning of headstones/markers and litter cleanup. Cary’s Spruce Program has graciously provided the supplies for this event. Limited volunteer spots available, so sign up today!

Public Safety Day brings together local agencies, activities, attractions, and vendors to help promote awareness, safety, and neighborhood unity. This year, over 20 public safety departments from throughout the region lined Academy St. with their vehicles and equipment. Event attendees enjoyed the displays, engaging with officers, and cheering along during the annual Cary Police vs. Cary Fire fitness competition.

The Hometown Spirit Award nomination period closed last night. Twelve citizens were nominated this year for the honor, and the winner will be announced at the November 9 Council meeting.

The FY 2022 adopted operating, capital and budget in brief documents are now available on Cary’s website. A limited number of printed copies will be distributed in mid-October.

Fire partnered with UL for a pilot project to study the air quality in Station 4, resulting in it being the first fire station to earn the UL Verified Healthy Building distinction. UL conducted on-site visits and performance testing, as well as reviewed related documentation to verify that the building air meets rigorous standards in a program embraced by many Fortune 500 companies. These objective, science-based standards are aligned with industry-recognized, third-party organizations such as the Environmental Protection Agency (EPA), the National Institute for Occupational Safety and Health (NIOSH), the World Health Organization (WHO) and the American Society of Heating, Refrigerating and Air-Conditioning Engineers (ASHRAE), among others. All laboratory testing and analysis methodologies are informed by the EPA Compendium of Methods, ASTM D5197 and TO-17 for air sampling, and EPA methods. UL introduced the program to meet the rapidly growing demand for buildings that prioritize occupant health and wellness.

Cary utilizes up to 1 million gallons of reclaimed water each day during the summer. This environmentally friendly resource reduces discharges to streams, lessens the amount of drinking water on lawns, and reduces the water demand on the Cary/Apex Water Treatment Facility. The reclaimed water system is guided by a master plan which is periodically updated to ensure that future infrastructure is aligned with current demand and growth forecasts. Recently the latest update was completed and reflects revised reclaimed water demands as well as adjustments to the service area per Policy Statement 132.

Applause! hosted the first “Speak Out!” class on September 14. “Speak Out!” is an outreach program created as an out-of-the-box way to serve the community. The program was requested as public-speaking class for adults that could also provide connections and friendships after a year of isolation. “Speak Out” uses improv, scene work, and breathing and voice exercises to help participants gain confidence when speaking out around others and builds connection in a laid-back environment. 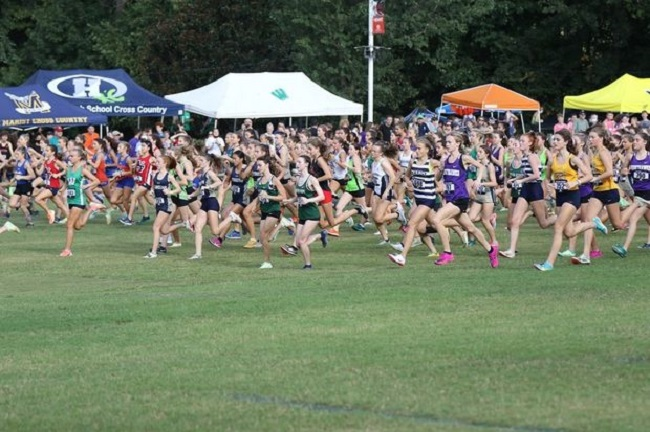 Planning and Zoning Board Meeting
Monday, September 27 at 6:30 PM

Activities for next week include staff meetings, meeting about future professional tennis tournaments, a Cary-Morrisville join meeting, the Annual Advisory Board Volunteer Event, a meeting of the North Carolina Metro Mayors, and the Good Hope Farm’s to Fork Event.

Well, that is all for this week. My next post will be on Sunday, October 3rd.  Although I have Facebook and Twitter accounts those are not the best means of communications with me. Please send all Town of Cary questions or comments to Harold.Weinbrecht@townofcary.org and email personal comments to augustanat@mindspring.com.

From the blog of Cary Mayor Harold Weinbrecht. Images by Ashley Kairis and the Town of Cary.