Cary, NC — Throughout its 88-year history, American Dance Festival has been a nationally recognized leader in the indigenous art form of modern dance.

This year ADF is teaming up with the NC Museum of Art to present Together We Dance, an outdoor festival in the Joseph M. Bryan, Jr. Theater in the Museum Park September 9-16.

“After a difficult year and a half, we are thrilled to bring the community together again at our first-ever outdoor festival for eight performances by some of the finest dance companies dazzling audiences today,” said Jodee Nimerichter, executive director of ADF. “And we couldn’t ask for a better partner than the North Carolina Museum of Art.”

A New Season of Dance, Right Here in the Triangle

In reimagining a dance festival in a post-COVID-19 world, ADF looked to bring performances outside so audiences could spread out in fresh air. The award-winning Museum Park Theater of the state’s art museum, which has hosted orchestras, puppet shows, movies, and bluegrass, pop, and rock acts for more than 20 years, was the perfect local venue.

While smaller dance events, including ADF performances, have been hosted inside the museum galleries and in the Museum Park, a festival of this scale has not taken place at the NCMA before. General public tickets are available online and performances last approximately 60 minutes with no intermission.

“We are honored to host American Dance Festival’s annual season through this exciting activation of the Museum Park Theater,” said Valerie Hillings, NCMA director. “We’re bringing together art, nature, and people through dance.”

Ready to get your tickets? Here’s the full schedule and details. 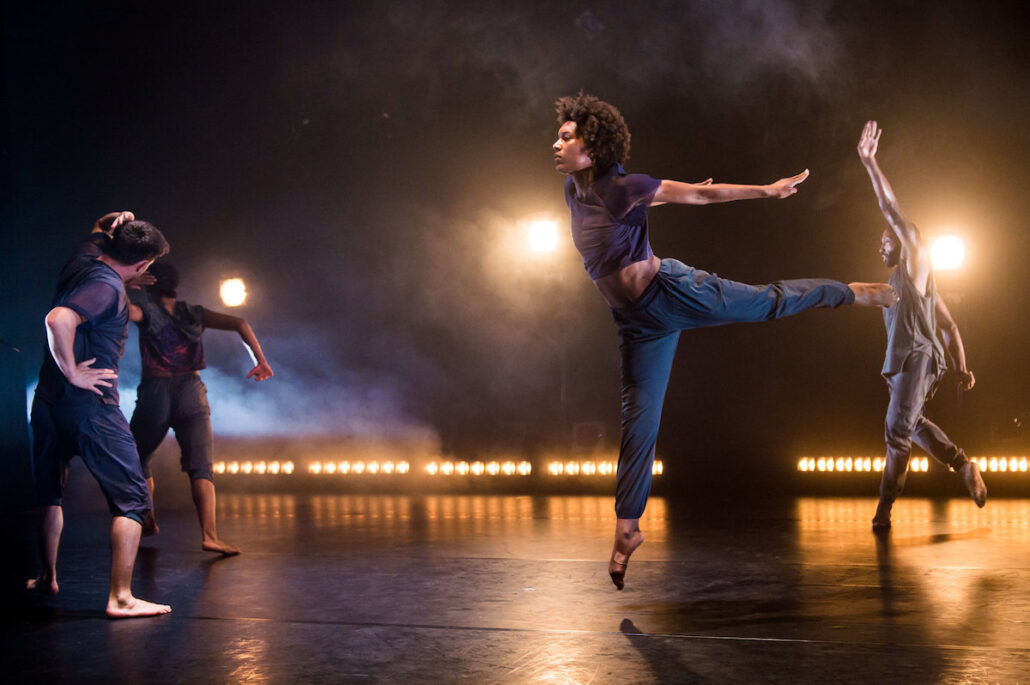 A.I.M by Kyle Abraham is a Black-led contemporary dance company whose work is informed by and made in conjunction with artists across a range of disciplines. It entwines a sensual and provocative vocabulary with a strong emphasis on music, text, video, and visual art.

The Pass (working title) is a new, whisperingly playful work created as an in-conversation duet inspired by Merce Cunningham’s 1972 ensemble work Landrover and commissioned by the Baryshnikov Arts Center in partnership with the Merce Cunningham Trust. Drive is a high-energy, propulsive work set to thumping club beats that was created in 2017 for eight dancers.

Pilobolus, the remarkable company that secured an iconic place in American culture in the early 1970s, is still wowing audiences with its irresistible mix of wit, sensuality, and stunning physical acumen. The company performs Megawatt (2004), made in the last decade of founder and choreographer Jonathan Wolken’s life.

This revival of the work, made possible in part by ADF, is updated to expand its unfettered exuberance and frenetic expression of life-affirming creative drives and resistance to stagnation by casting dancers in roles that gently subvert stereotypical gender-associated movement vocabulary. Shizen (1978) means nature, and this dance explores coupling as a biomorphic reflection of the natural world. The shakuhachi music was composed by renowned flutist Riley Lee.

Walklyndon (1971), one of Pilobolus’s very first works, is a silent dance owing much of its physical humor to slapstick and vaudeville. In the solo from The Empty Suitor (1980), a man flummoxed by seduction comically attempts to regain his footing in life. Nothing seems to go right for the hapless, hopeful beau as he tries to win the affections of a calculating femme fatale.

Fenley reimagined the commanding score as the sonic landscape for a solo journey rather than the usual ensemble interpretations. Annique Roberts of Ronald K.

Brown/EVIDENCE performs the solo at 3:30 PM and Michael Trusnovec of the Paul Taylor Dance Company performs at 7:30 PM. Each program is followed by a Q and A with Molissa Fenley and the artist. 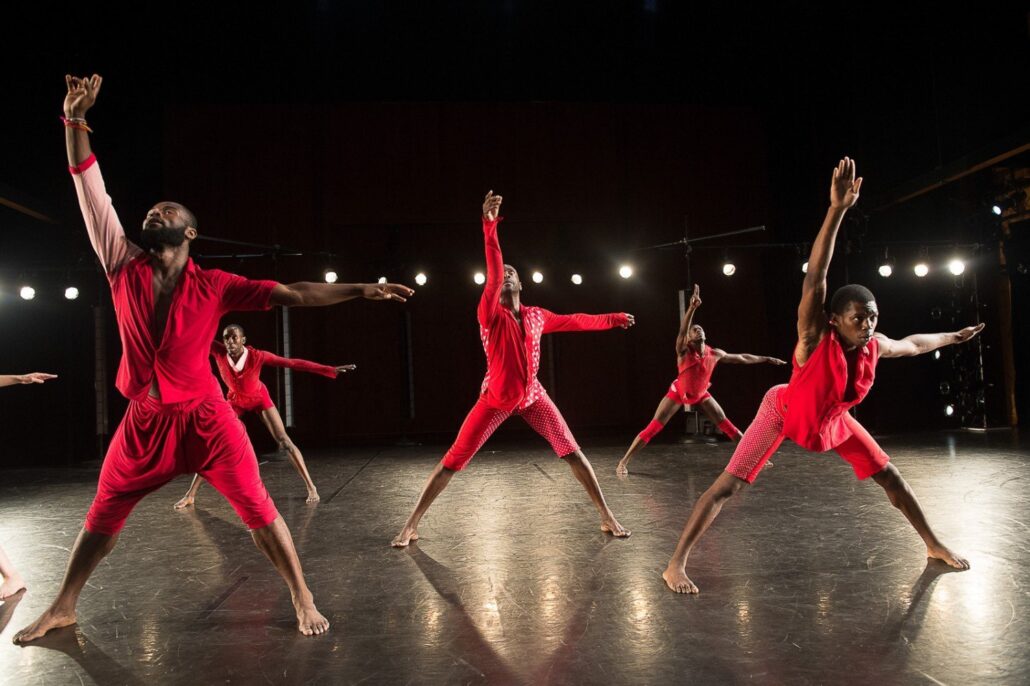 Brooklyn-based dance company Reggie Wilson/Fist and Heel Performance Group’s works display rigor, structure, and craft in a postmodern dance vernacular. The company presents CITIZEN (excerpt), a series of solos that asks: What does it mean to belong and what does it mean to NOT want to belong?

INTRODUCTION (a solo performed by Reggie Wilson) is a contemporary experimental performance theater work in which Wilson shares a very personal account about his experience of the Spiritual Baptist religion in Trinidad and Tobago. The dance the duet is a seemingly more traditional contemporary work where Wilson weaves an interesting story while playing with and investigating more deeply the idea of duets.

Internationally acclaimed for its “wonderfully precise dancers” (New York Times), BODYTRAFFIC returns to ADF with a program highlighting the artistry of three of today’s most engaging contemporary dance choreographers.

On tap is the world premiere of a duet by Brian Brooks, created during his recent ADF residency, that is certain to reveal his characteristic “kinetic thrill and visual power” (Washington Post). Also featured is Matthew Neenan’s A Million Voices, a piece set to the nostalgic songs of the great Peggy Lee that explores eternal notions about life, love, and war.

Rounding out the program is Micaela Taylor’s engaging SNAP, a piece capturing her take on the Los Angeles experience that urges us to “snap out of” the social pressure to conform. 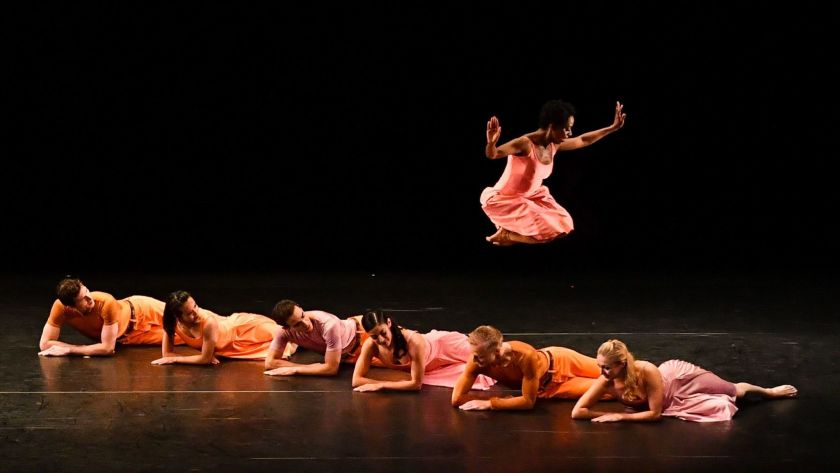 The Paul Taylor Dance Company closes out ADF’s season at the North Carolina Museum of Art. Founded in 1954 the company remains one of the most famous and dynamic modern dance ensembles of our time.

The program includes A Field of Grass (1993), with songs sung by Harry Nilsson, a dance evoking America in the 1960s where a central character experiences love, drugs, rebellion, and hope through his counterculture community. Duet (1964), last performed by the Taylor Company in 1992 and made after Taylor’s lyrical 1962 masterpiece Aureole, is a testament to his craft with simplicity, beauty, purity, and gentleness.

Esplanade (1975), the definitive Paul Taylor work, is at once playful, somber, romantic, and explosive—a pillar of modern dance that instantly affirms Paul Taylor as one of history’s greatest choreographers.

More information and tickets can be found at americandancefestival.org.