Cary, NC — On Thursday, July 22, 2021, the Cary Town Council convened in front of the public in their Town Hall Chambers for the first time in more than 500 days.

A few laughs and stutters were made along the way as the council adapted to sitting closely again after so long and as they got reacquainted with the more relaxed rules of a non-virtual meeting, such as no more roll-call style voting.

About 40 attendees were in the room, made up of Town staff, rezoning applicants and Cary residents. 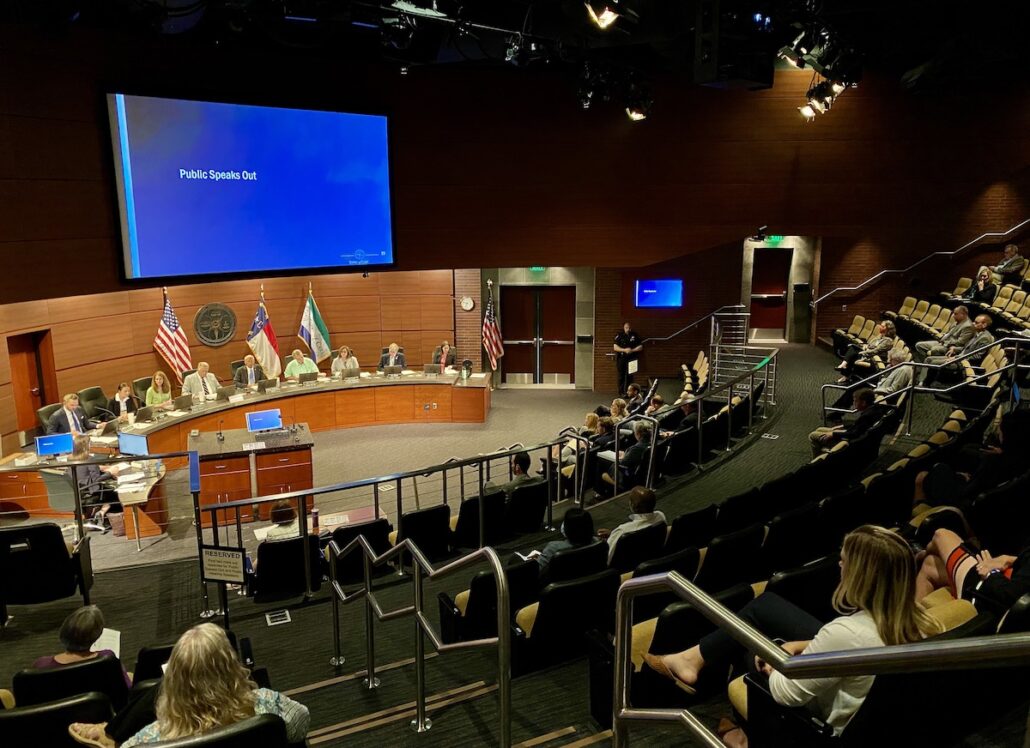 Cary Town Manager Sean Stegall provided an update to the council, noting that with the reopening of Town Hall on Thursday that all staffed Town facilities are officially opened to citizens. Most staff returned in early June to have a time of transition before welcoming in the public.

“Of course, this by no means is to say that the pandemic is over —quite the contrary,” said Stegall. “It does however represent a consensus among our leadership team that now is the right time for this next step in learning how to live in a COVID world.”

Stegall also announced the launch of a new phase of the Cary 311 information service. This phase has taken shape in the form of a physical location inside the Town Hall lobby with several Town advocates there to answer questions and provide citizens with a starting point to their Town Hall visit.

In closing, Stegall said, “The pandemic has been and continues to be a time of experimentation for us and I expect the strides we made in doing business remotely will stay in place.” 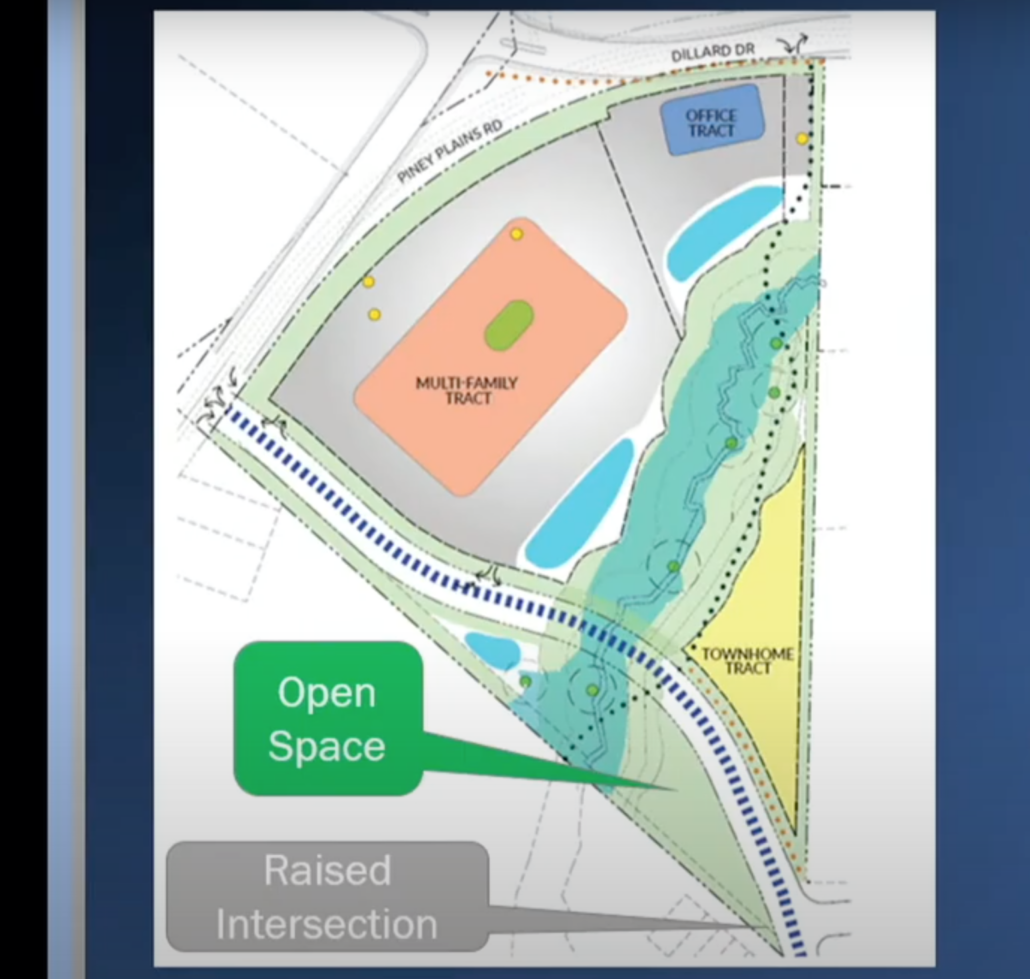 Undoubtedly, the most talked about and most narrowly approved item of the meeting was the case “19-REZ-17,” better known as the Dellinger PDD Amendment. This would affect Tracts 3, 4 and 5 of the site located south of the intersection of Piney Plains Road and Dillard Drive, nearby Crossroads Plaza.

“This request is a little more complex. This one has been around for a while, about 2 years in fact,” said Debra Grannan, Cary’s Associate Planning Director.

In this case, 23 acres are up for a change in usage. The request modifies the previous entitlement of predominantly office and retail uses to instead allow the development of up to 285 multi-family dwelling units, up to 50,000 total square feet of office use, and up to 20 townhouses.

This time around, the applicants had adjusted their proposal to also include:

The controversial item came down to a narrow lead of 4 yes votes from Mayor Pro-Tem Don Frantz and councilmembers Ya Liu, Lori Bush and Jennifer Robinson. Mayor Harold Weinbrecht and councilmembers Ed Yerha and Jack Smith voted against.

The dissenters mentioned not liking the loss of a traffic circle from an earlier draft of the plan, wanting more townhomes, wanting a higher percentage of affordable housing, and simply preferring the current uses designated for the site over the proposed uses.

Those who pushed the request over the finish line spoke highly of the mix of housing, the environmental commitments, and creating more affordable options for residents. 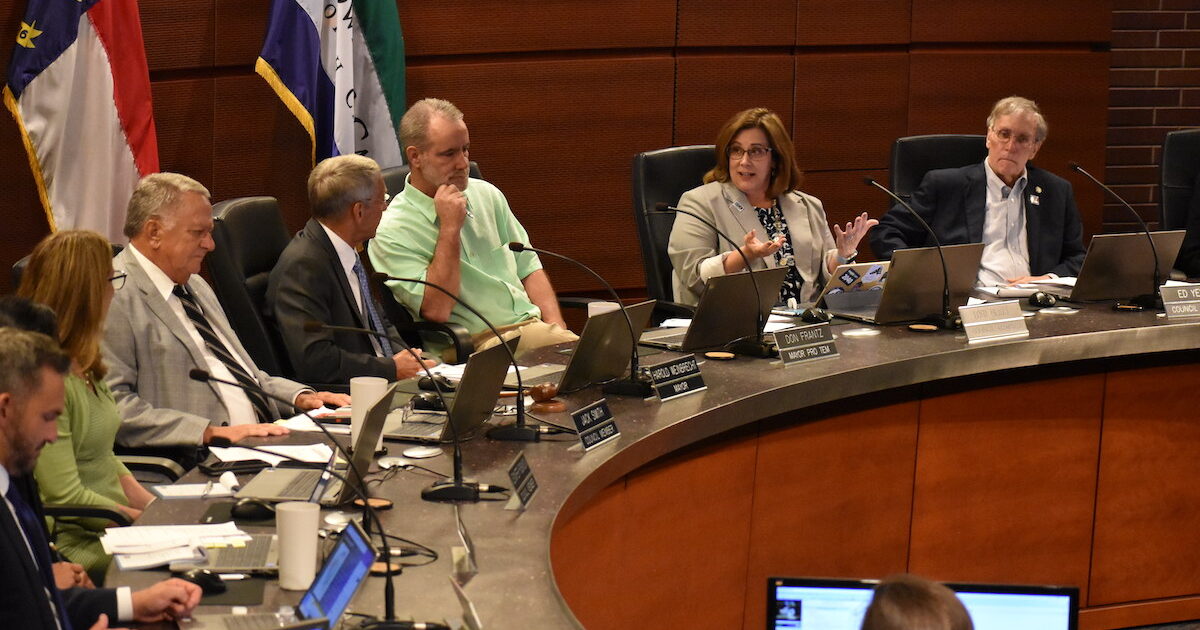 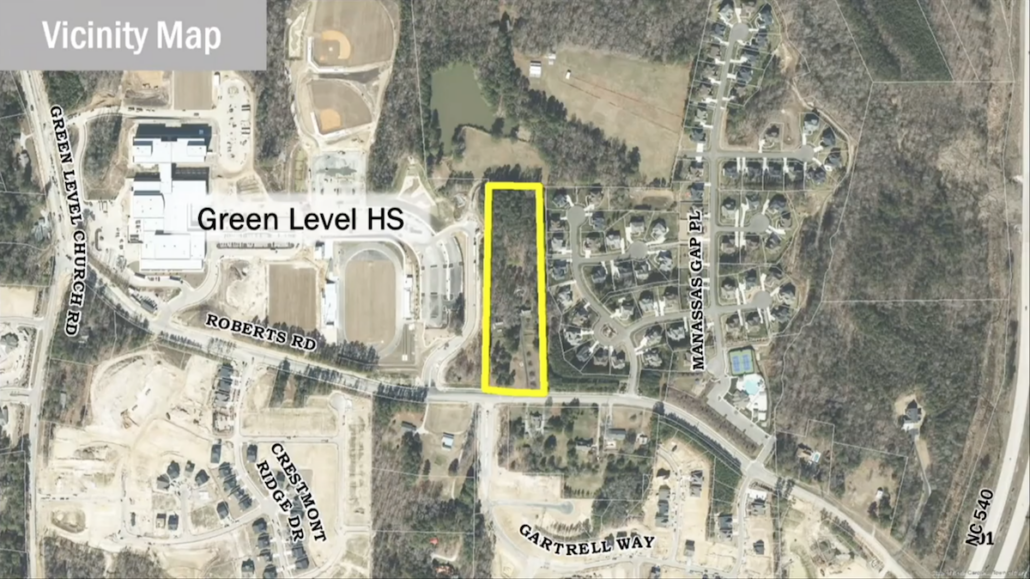 What was different going into this discussion was the Planning and Zoning Board had found the request to be inconsistent with the Imagine Cary Community Plan by a vote of 7-2, which does not happen often.

The applicants proposed zoning conditions to include:

Following the presentation, the council primarily spoke about density reduction. Frantz was the only council member to say he would have liked to adjust the proposal to allow for more townhomes.

“If there’s any place that I think we should be encouraging more density and a little more affordable housing is next to a school,” said Frantz, who saw the 4 unit downgrade as a “missed opportunity.”

The council moved to a vote where Frantz voted no and the remaining 6 voted yes. 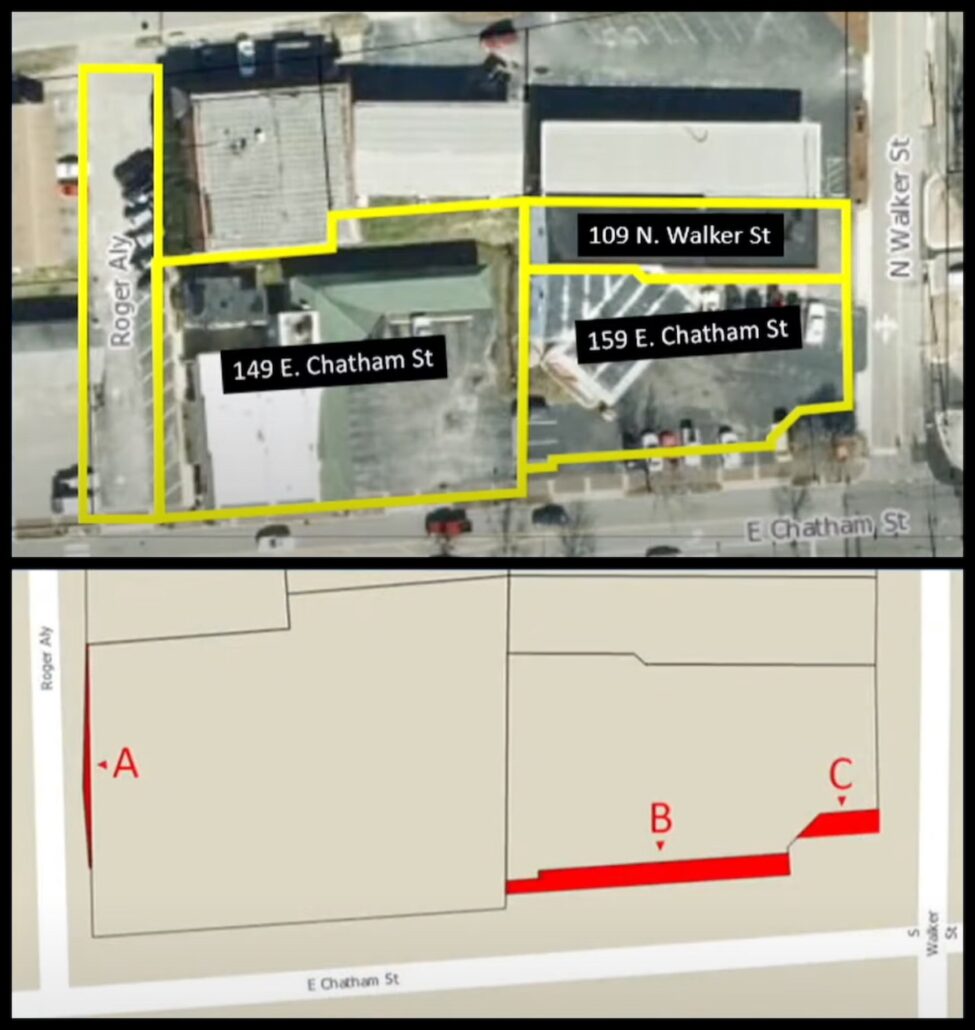 The upper image shows the properties to be redeveloped as part of the project. The red areas noted with A, B and C are the rights-of-way to be closed during the construction period.

Economic Development Director, Ted Boyd, made a request before the council to close three small rights-of-way for the Rogers Redevelopment Project. These closures will include sections along Roger’s Alley and E. Chatham Street, but should not impact the traffic patterns of the area.

The overall redevelopment project for this site was approved by the council last month and with a unanimous vote, the council moved to approve the closure order. Though it was a public hearing, no community members spoke virtually or in person.

Two additional public hearings were held, both relating to rezoning cases. One requests to bring an EchoPark Car Dealership to the vacant property across from the Centrum shopping center at 2333 Walnut Street. This spot, which once hosted Crossroads Ford, was renovated in 2019 and has been vacant ever since.

A representative spoke from the NC-based automotive group called EchoPark and in conversation following these remarks, councilman Jack Smith voiced his disappointment with the proposed use.

“I think there was a lot of hope that this could be upfitted for office easily,” said Smith. “I’m going to look at this one closely because I’m still not convinced it’s the best use for it.”

The other request was to bring 55 single-family detached residential units, accessory uses and neighborhood recreation to a 32.92-acre site at 7921 Mills Road.

One citizen spoke at this hearing who has owned property at the border of this development area for 51 years. He did not oppose the project and Cary’s growth but expressed an interest in working with the Town to protect his interest and explore options for annexing a portion of his land to the Town.

Both rezonings will be revisited before a final vote is made in a later meeting. For further details, see the meeting presentations.

Approved in the Consent Agenda

During each meeting, a list of items that don’t require further discussion is compiled into a consent agenda, which can be approved altogether with one vote from the council.

In Thursday’s meeting, the following was unanimously approved. Search the links below for summaries of each item.

Public Speaks Out Returns to the Chambers 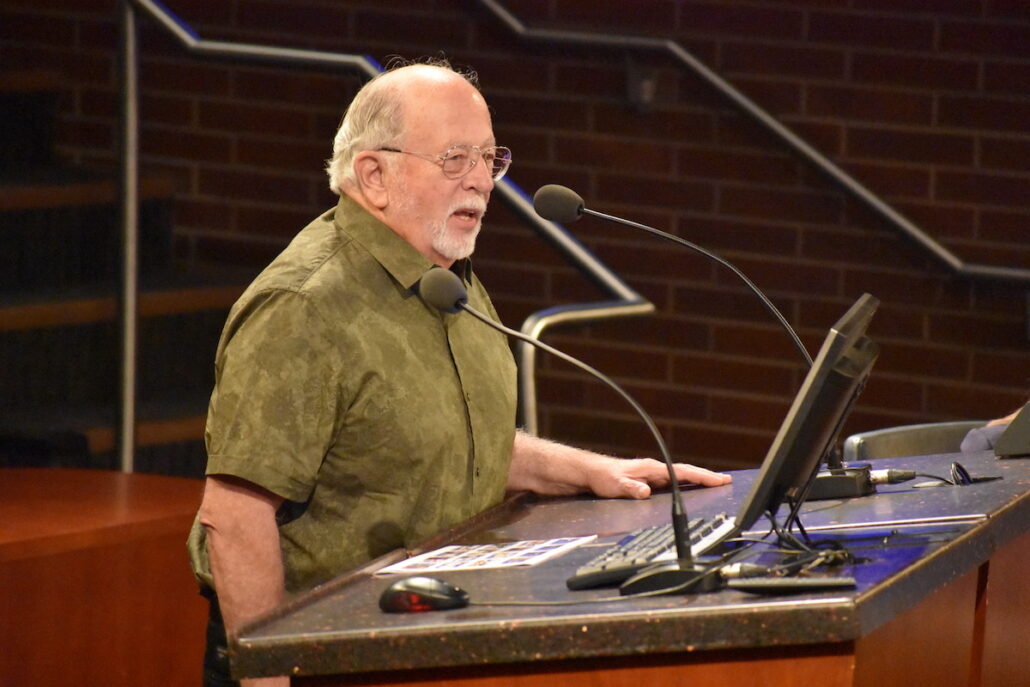 The last speaker of the night, Jim Simmons.

Every virtual meeting held since March 2020 has remained with the ability for Cary residents to call in to speak during the Public Speaks Out portion of the meeting when any topic, aside from those scheduled for a public hearing that night, can be brought to the council.

For the first time of the year, citizens got to physically return to the podium or have the option to call in.

The first to the podium was Donna Maynard Walker who encouraged the council members to “consider the numbers” and “look at the needs of the community” when making their decisions on affordable housing.

She shared her experience of living downtown and seeing many homes built around the 1950s and after being torn down and replaced by bigger, much more expensive places, leaving lower-income families and workers without housing. She ended her comments by asking the council to take care of those who need affordable housing.

Three additional speakers included lawyers representing clients and one resident named Jim Simmons who moved to Cary from California about 6 weeks ago.

“I just wanted to say hello and introduce myself and tell you how much I appreciate coming 3,000 miles across the country to join you here and hopefully add some value,” said Simmons.

As he has each month of 2021, Councilmember Ed Yerha presented another monthly historical presentation about Cary to pay homage to the Town’s 150th year.

This time around, the topic was “Celebrations in Cary,” including the 100-year celebration known as Cary’s Centennial and some more familiar names like Lazy Daze and Spring Daze.

There’s even quite a bit of history about Cary and gourds. That’s right, gourds. At one time Cary was known as the Gourd Capital of the World and even had gourds included on the official town seal. Anyone can view Yerha’s full, 10-minute presentation on YouTube.

Attend or Watch the Next Meeting 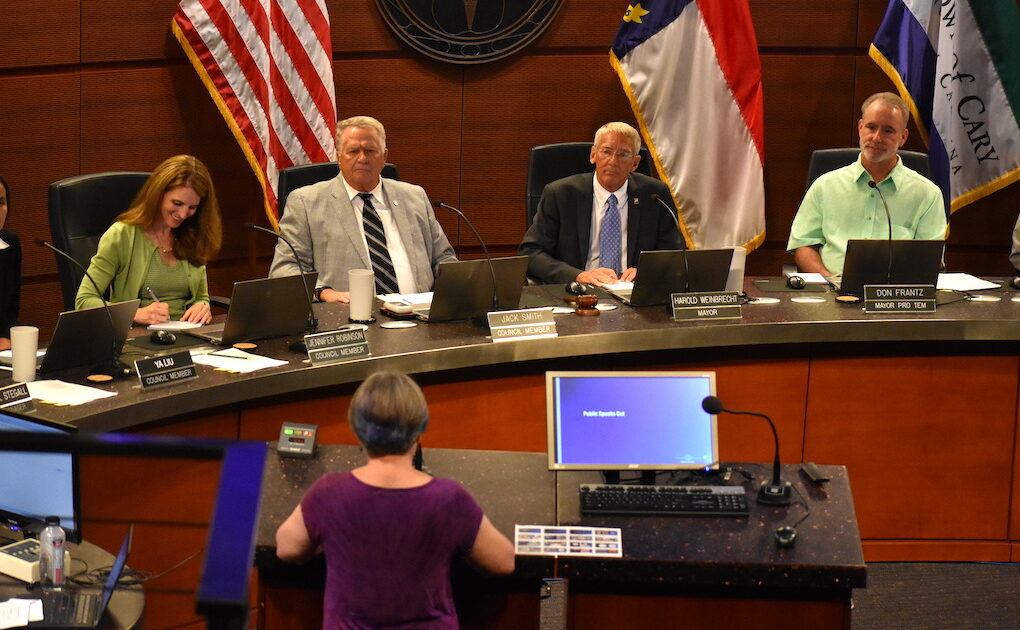 Following nearly 2 hours of the regular meeting, the council went into a closed session and adjourned just before 9 PM. For further details, the recorded meeting can be found on the Town of Cary YouTube channel.

The next regular meeting of the Cary Town Council is scheduled for Thursday, August 26, 2021 at 6:30 PM at Cary Town Hall. For those wanting to view from home, the meetings are on the CaryTV station and streamed live on the Town of Cary Facebook Page and YouTube Channel.

Story and photos by Ashley Kairis. Project renderings and maps by the Town of Cary.