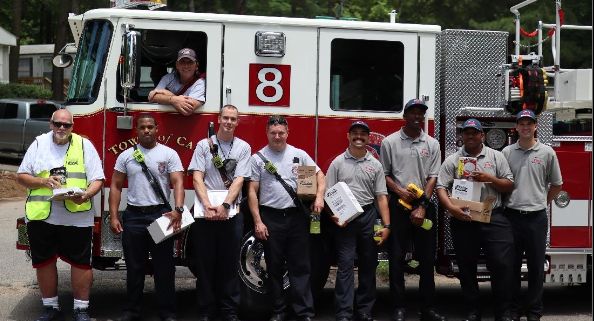 Cary, NC – This was my first week back after a week of vacation.

Monday I contacted each council member to learn of concerns or questions they had about Thursday’s upcoming agenda. The two items of most interest were the Wellington rezoning for a dentist office and the Highway 55 rezoning for a grocery store.

Later Monday I met virtually with management, other staff, and the Mayor Pro-Tem to go over the agenda items. Our meeting lasted about fifteen minutes.

My last meeting Monday was with the town manager where we mostly talked about the upcoming municipal elections and redistricting.

Tuesday I met virtually with the homeowners in Wynston Ridge to give an update of what is going on around them and new developments within the town. My topics included the future of Holly Springs Road, the Fenton, the old mall site, downtown developments, and the downtown park. My talk lasted about ten minutes.

Thursday the council held its first regularly scheduled meeting of June. The agenda included four consent items, five public hearings, and two discussion items. Several residents spoke against the rezoning proposal for the dentist office at the corner of the Wellington subdivision.

Under discussion the council unanimously approved conveying a canine to Holly Springs. The handler retired and the dog had more years of service.

The council also approved a budget requests for the downtown park. Construction materials have increased of significantly and have resulted in additional costs. The funds will come mostly from the last bond referendum funding. Without the additional funding the council would have to cut what components of the park. There was no interest in council on making the park less than what was designed. We are committed in creating one of the most iconic parks in the region, state, and nation.

The meeting concluded after a closed session with a time of about two hours.

Friday I participated in a meeting of the North Carolina Metro Mayors. The following is a summary from the Executive Director:

Public Safety – nothing to report from NCGA

Economic Development – nothing to report from NCGA

The meeting concluded in less than half an hour.

The following is the town manager’s report for the week:

On Monday, Animal Services Supervisor Chuck Haggist presented to the Director’s Group for an informative discussion on animal services. This was a timely presentation due to recent dog attacks in the news and increased calls for wildlife assistance during the pandemic. It’s always a pleasure to learn more about the excellent services we provide to our citizens.

This week, Mayor Pro Tem Don Frantz announced the nominees and winner for Cary Elementary School’s Honor a Teacher Award. Congratulations to all of the award winners and nominees who demonstrated outstanding service to our community through their dedication and diligence during a stressful and unpredictable year.

Please note that there will not be a Council Weekly Report or Weekly Operational Report next week because of the Juneteenth holiday. My next message will be on Friday, June 25.

On Thursday, a Cary cross-departmental team attended the Downtown Park IoT Innovation Workshop at the Executive Briefing Center on SAS campus. The group was joined by several SAS team members as well as representatives from Microsoft and Semtech, Ltd. The goal of the workshop was to begin to lay the foundation for IoT and Smart technology integration into the Downtown Park. Cary staff gave an overview of the park plans and led a personas exercise to get an understanding of use cases for technology solutions, keeping service to our citizens as the highest priority. Semtech, Microsoft, and SAS shared concepts, resources, and past project examples for using IoT technologies in public sector spaces to connect citizens and communities across a regional area. The workshop served as a kick-off for visioning and the work will continue in the coming months.

Cary received notification of the SolSmart silver designation from ICMA this week. SolSmart is a program funded by the US Department of Energy for the purpose of encouraging and simplifying the process for solar installation. Cary undertook staff training, updated the solar permitting checklist, and provided clarification regarding solar being allowed throughout residential districts in town. This work is anticipated to further advance solar installations in Cary, resulting in reduced emissions.

At a press conference on Thursday, Governor Cooper announced a new incentive to encourage COVID-19 vaccinations across the state. The Your Shot at $1 Million campaign will automatically enter North Carolinians age 18 and older who have received at least one vaccine dose in four drawings to win $1 million; those 12 to 17 will be entered in four drawings to win a $125,000 college scholarship. Currently, 54 percent of adults in the state have been vaccinated with at least one dose. In Wake County, 69 percent of adults have received at least one dose. As vaccination efforts continue, Governor Cooper today extended the mask mandate for certain at-risk settings until the end of July, with a new executive order issued.

Summer camps open on June 14, and we are excited to welcome 105 campers each week at two locations (Bond Park Community Center and Herb Young Community Center). Camps will serve approximately 375 youth throughout the summer. Camps provide a fun and safe environment for the participants and follow recommended NCDHHS protocols to ensure everyone is safe and healthy throughout the summer. Even though there are no off-site field trips this year, the campers will enjoy visiting instructors for art, performing arts, STEM, sports, outdoor recreation, and nature!

Fire, in partnership with the Office of the State Fire Marshal and Cary CERT, participated in Smoke Detector Saturday on June 5. Engine 9, Rescue 2, and Ladder 8, along with 10 of Fire’s newest recruits as well as Cary CERT members, canvassed 414 homes within Cary Mobile Estates and Chatham Estates as part of the Fire Department’s Community Risk Reduction initiatives. The team installed 122 smoke alarms in 86 homes; 16 of those homes didn’t have smoke alarms at all. 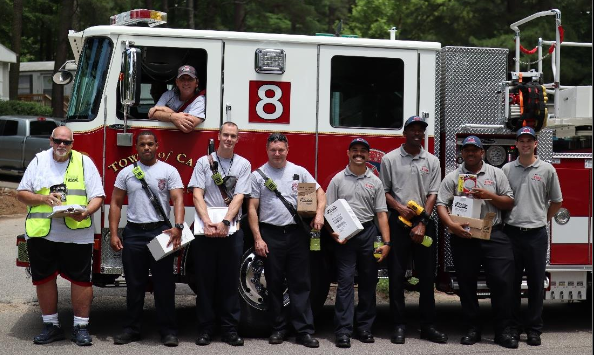 This week, staff visited two businesses that play a key role in how Cary diverts waste from the landfill. Cary’s collected yard waste is hauled to and processed into compost at McGill. All of Cary’s recyclables are sorted and baled for market at the Waste Management/Recycle America material recovery facility (MRF). Staying in regular contact with these partners keeps staff current on their processes and provides insights that help guide Cary’s services. 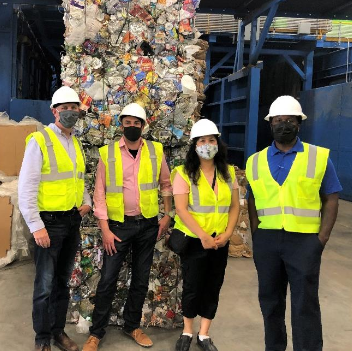 Next week’s activities include a Chamber Golf event, staff meetings, a virtual rap session with Board and Commission members, a meeting of the Capital Area Metropolitan Planning Organization’s Executive Board, and a couple of days of vacation with family.

Well, that is all for this week. My next post will be on Sunday, June 20th.  Although I have Facebook and Twitter accounts those are not the best means of communications with me. Please send all Town of Cary questions or comments to Harold.Weinbrecht@townofcary.org and email personal comments to augustanat@mindspring.com.

Harold Weinbrecht, Jr. is the Mayor of Cary. This column is adapted from his blog.