Cary, NC — Except for a couple of player changes, one out of necessity the other by choice, Coach Rod Brind’Amour kept his game plan virtually the same, this time coming out on top 3-2 in overtime to halve the series lead 2-1 against the Tampa Bay Lightning.

Petr Mrazek got his first start in goal in about a month, definitely not because Alex Nedelkovic has played poorly, actually, he’s played great. Rod decided to make the change for a “mental” break and while not admitting it, also to keep Mrazek sharp with the plan that both keepers would be needed in a deep run for The Cup.

Morgan Geekie replaced Vincent Trocheck who collided legs with Warren Foegele late in the second period of game two. With Nino Niederreiter also out, that means the second and third top point leaders for the Canes during the regular season are leaving a big hole. Injuries are part of pro sports, maybe none more than hockey, and as Roddy says, it’s next man up. 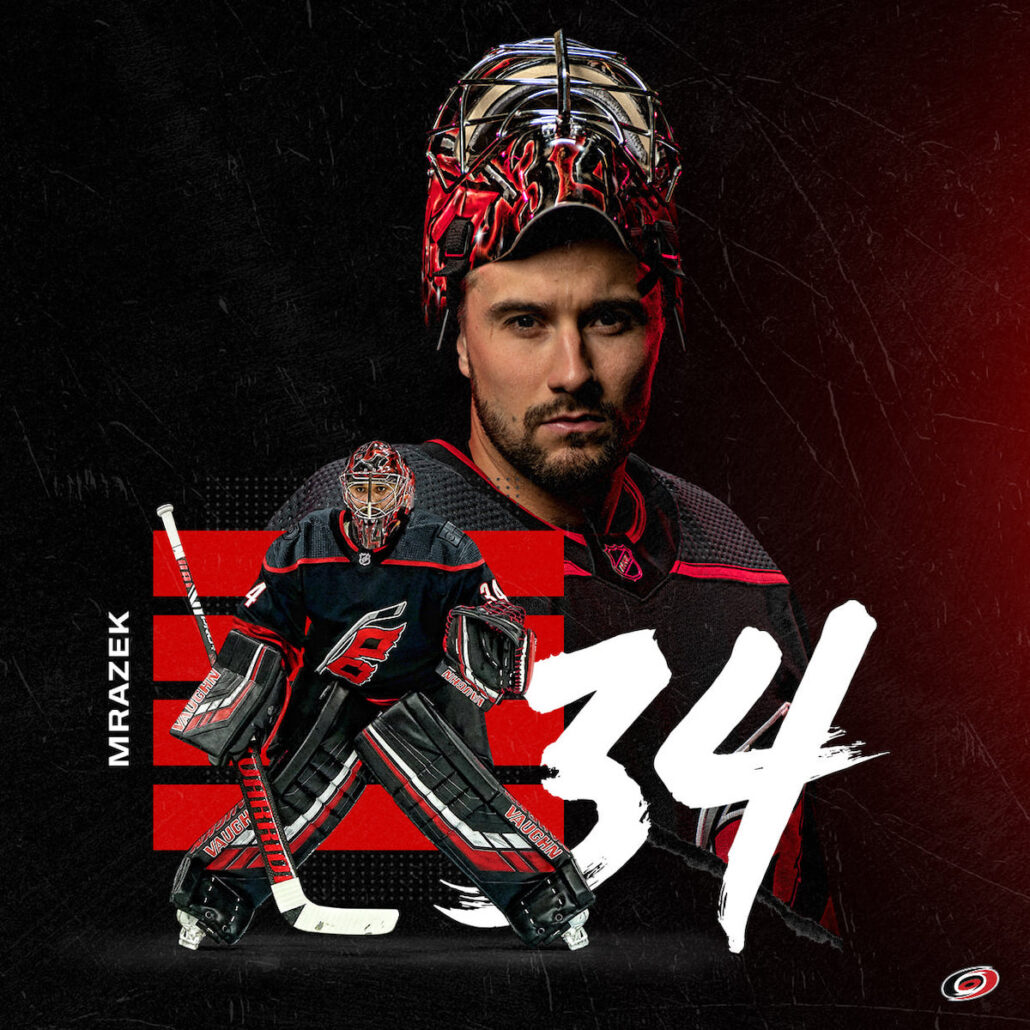 Jordan Staal’s line started for the third game in a row as possession is key. Jordo won the faceoff and at one point during the game, was so impressive on faceoffs that the play-by-play announcers were in awe of Jordo’s power and winning almost at will.

If it wasn’t seeing all the blue sweaters in the stands and the teams having their respective home and away uniforms on, the game was very similar to the first two games in this tough series. At this point these are 2 of the top 3 teams left in the playoffs, Colorado being the third. But, having that moniker doesn’t mean much if anything during the playoffs.

The Bolts were intent on getting to Mrazek early to see if he had any rust but the Canes forechecking and solid defense kept Tampa Bay from getting their first shot over 5 minutes into the game off a wrister from Victor Hedman that Mrazek easily handled. The Canes’ fourth line, normally used to rag the opponent, provided some energy. Plus, they allowed the top lines some needed rest and did all that on their first shift but also had a couple of solid scoring chances.

Geekie is a talented player that isn’t afraid to muck it up in a battle for the puck and has the skill to put the puck in the net. In the first period, after winning a battle off the boards, Geeks went around a defender going right to the crease and almost flipped the puck over Andrei Vasilevskiy’s pads.

Not that Andrei Svechnikov needs any incentive to shoot the puck but getting the last goal in the previous game had to be good for his confidence. Svech has one of the most accurate wrist shots on the team and with the amount of space that Vasilevskiy covers in front of the goal by his sheer size, Svech is aiming for the posts.

Twice in a span of 6 seconds, Svech shot for the posts, went a hair wide and from excellent coaching in his past, followed his shot, retrieved the puck and sent another shot from his off-wing. Late in the period, the Bolts went on a frenzy pelting off several grade-A chances with Raz coming up with strong saves every time. The Canes squandered a powerplay late in the period, but give the Bolts PK credit as the Canes couldn’t even get set up.

The second period saw all the regulation scoring having Caniacs go from feeling good, maybe real good to oh boy, this is still a battle. The Canes scored first for the first time since game 1 against Nashville.

The play started along the half boards in the Canes end where Sebastian Aho knocked the puck into the neutral zone, carried it into the Bolts end with Svech joining on the right. Fishy made a lead pass over to Svech that Svech initialed bobbled but gained control, turning his back to protect the puck, seeing Brett Pesce racing over the blue line, Svech dropped a soft pass that Pesch one timed a slap shot going through Ondreji Palat’s legs that Vasilevskiy couldn’t react fast enough as the puck hit the top left corner of the net for a great looking goal for the 1-0 Canes lead.

Two and a half minutes later the Canes got on the board again. It was either a bad pass from the Bolts defense or a bad snare by Palat in the neutral zone,that had the puck go into the Canes end with stalwart Jaccob Slavin settling the puck as he viewed the landscape.

Slavo saw Teuvo Teravainen in the center circle, made a 60’ hard pass that Turbo deflected to Fishy at the Bolts blue line. Fishy had the speed on his defender, went right to the net wasting no time to go 5 hole with a hard shot to give the Canes their first 2 goal lead of the series. 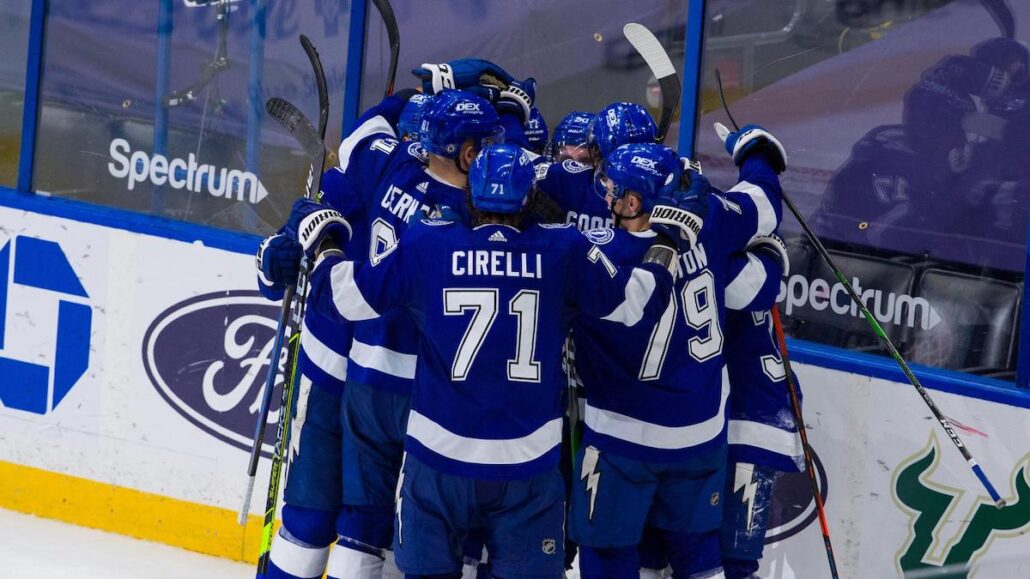 The Canes had little time to celebrate that lead as on his next shift, Fishy got called for cross checking. The Bolts powerplay is both lethal and amazing to watch. Huge difference between theirs and the Canes’, or most teams for that matter, is how they seem to always carry the puck into their offensive zone and immediately have everyone still moving along with crisp, and very quick passes.

All too often the Canes will either carry the puck in then rim the puck with the hope it makes it to the down low forward or opposite point person or simply dump the puck for overloading on the scrum in the hope to come away with possession. Quick passes are a sure way to get the defense on their heels and heads spinning. The Bolts got off 3 quick shots, forcing Mrazek to make solid saves.

With the Bolts pouncing on every loose puck, Steve Stamkos snared a rebound, quickly passing over to Nikita Kucherov who whipped a pass to Brayden Point all alone in the sweet spot of the slot who one timed it past Mrazek who had no chance on the shot. That was nearly $25 million in salary involved in that goal. Later in the period, Brady Skjei was playing Blake Coleman tight behind the net. So tight that when Coleman tried to go around the net, Skjei’s stick was tangled between Coleman’s legs for a tripping call.

The Bolts had a similar play as their first powerplay with Alex Killorn scoring off assists by Point and Kucherov for about a $20 million goal and sending a clear message to the Canes: no more penalties. Both teams continued to battle it out in the second with both coaches getting animated with everyone one on the ice in stripes. With the help of the two powerplays, the Bolts out shot the Canes 13 to 9 in the second.

Not that this was a game plan but there were a couple of open ice hits on Canes in the neutral zone. The first was by Kucherov blindsiding Pesce in the first that at first stunned Pesch but after 20 seconds got up and went right for Kucherov.

Late in the second Warren Foegele was blindsided getting hit both on the shoulder and head then falling to the ice on the shoulder that got hit. He immediately got up, knowing he was hurt, went to the bench then to the training room. He tried a comeback in the third but halfway into his first shift of the period realized he wasn’t helping the team and took himself out of the game.

As the third period went on, everyone knew the next goal was probably the game-winner so tighter forechecking and sure passes were the order of the day. Both teams got game low for shots on net,the Canes a very low 5 to the Bolts 9 with both goalies playing fantastic. Jani Hakanpaa deserves kudos for an excellent game. He pinched at just the right times, led the team with 4 crunching hits and really was never out of position.

His size allows him to be a little intimidating, not that any hockey player shys away from anyone but when you seen him bearing down, there’s probably a natural instinct for self-preservation that may force a bad pass. Dougie Hamilton has that same effect where as if a Slavoor Pesce is honing in one a player, they know there’s a better than fair chance that a hard battle is going to be needed to keep the puck as that magical pair seems to have sticks that have extension lengths that pop out.

As the period got below the 8 minutes to go mark, you could sense the next goal was all that more important. Rushes were quick and recovery back on defense was quicker. So for the first time in his series, the game headed into overtime. Hamilton got a soft penalty near the end of the third meaning the Bolts had about 30 seconds of a powerplay on fresh ice.

The Canes PK did a great job killing off that penalty with the Canes powerplay getting a shot themselves as Kucherov got called for a needless penalty when Martin Necas beat Kucherov for the puck along the near corner but grabbed Necas’ stick for the obvious call. The Canes had their umbrella set up with methodical passing along the perimeter, first Necas had the puck inside the near circle passing up to Hamilton.

Hamilton faked back to Necas then slid over, passing the puck to Turbo along the far half boards. With Jordo and Fishy in the dirty area of the crease, Turbo took a page from the Bolts playbook when he saw Fishy jump out to a clearing, snapping a quick pass that Fishy one time, hit something down low, a skate, stick or pad, popped up with Jordo tipping it in for the game-winner. 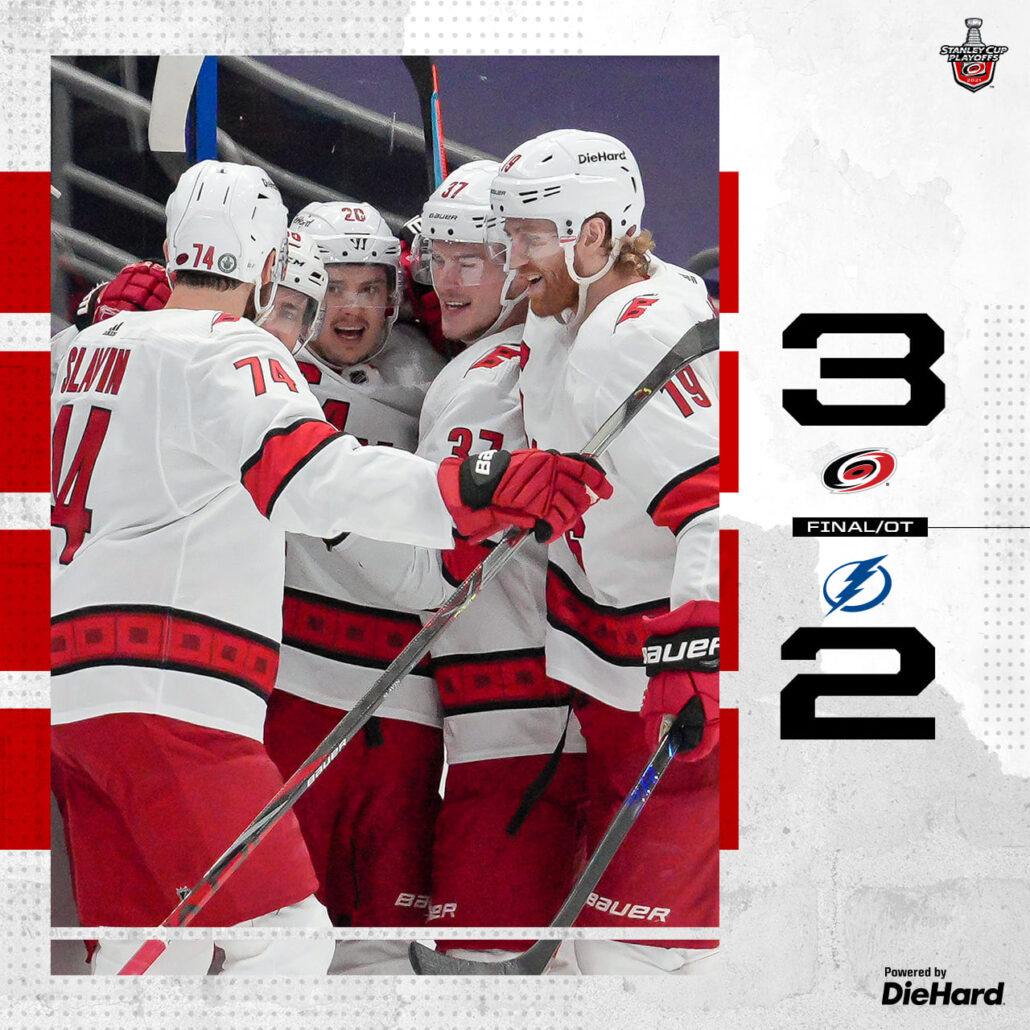 Great game which for the first time in a long time saw the Canes not trail at any point in the game. The big question for Roddy is which player is up next as doubtful for Foegs to be in the lineup but hoping Troch is good enough to go. The next game is Saturday at 4 PM.