Cary, NC — After not playing their best hockey in the first two periods, the Carolina Hurricanes found themselves trailing the whole game.

They even got down by 2 goals before getting a boost from a powerplay goal two-thirds of the way into the second period. Then came a complete turnaround in the third to tie the game, winning it in overtime, 4-3 over the Nashville Predators to with the first-round series, 4 games to 2.

Nothing gets easier as the Canes now face the defending Stanley Cup Champions, the Tampa Bay Lightning in Round 2. 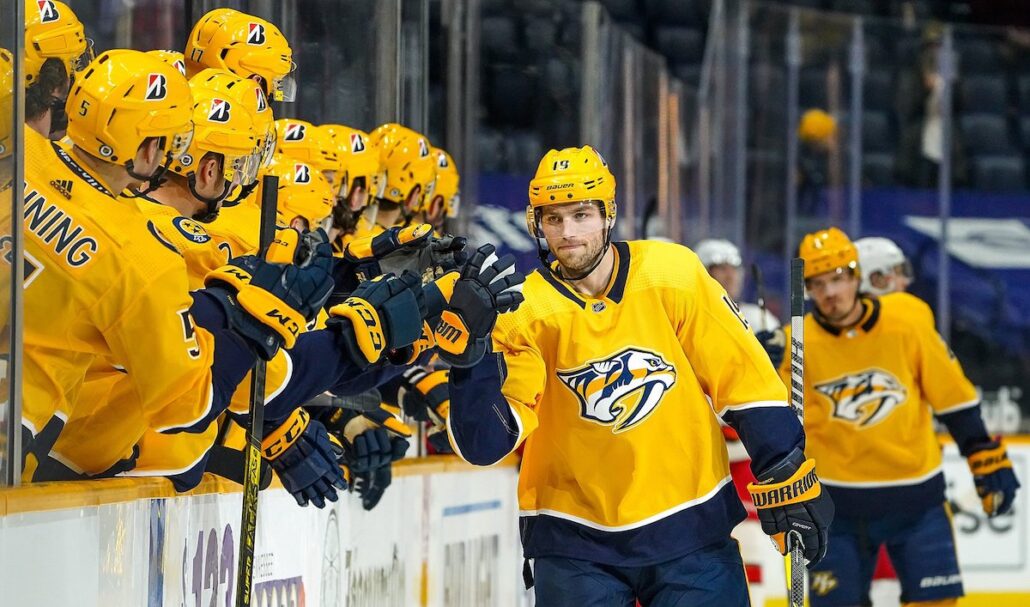 The Canes were hoping for a break in the sequence of the home team always winning. Plus, they would have even liked to score the first goal, something they haven’t done since game 1, but if they had to choose, they’d opt for the former, and that they did.

When you get to this point in the season, coaches stress that any mistake can result in disaster. In playoff hockey, disaster, especially in your own end, often results in your opponent scoring a goal. Disaster struck early for the Canes once again. The Preds kept possession in the Canes’ end, passing around the perimeter.

Caniacs enemy #1, Erik Haula, a very talented player, picked up the puck after a shot by Ben Harpur and went wide, carrying the puck up high to the right point. He saw Nick Cousins allude his man and get camped on top of the crease and immediately put his stick on the ice as a target.

Haula hit it with a hard pass for an easy deflection into the goal with only 1:44 gone in the game. Make that 5 consecutive games the Preds got on the scoreboard first getting the Canes on their heels early. 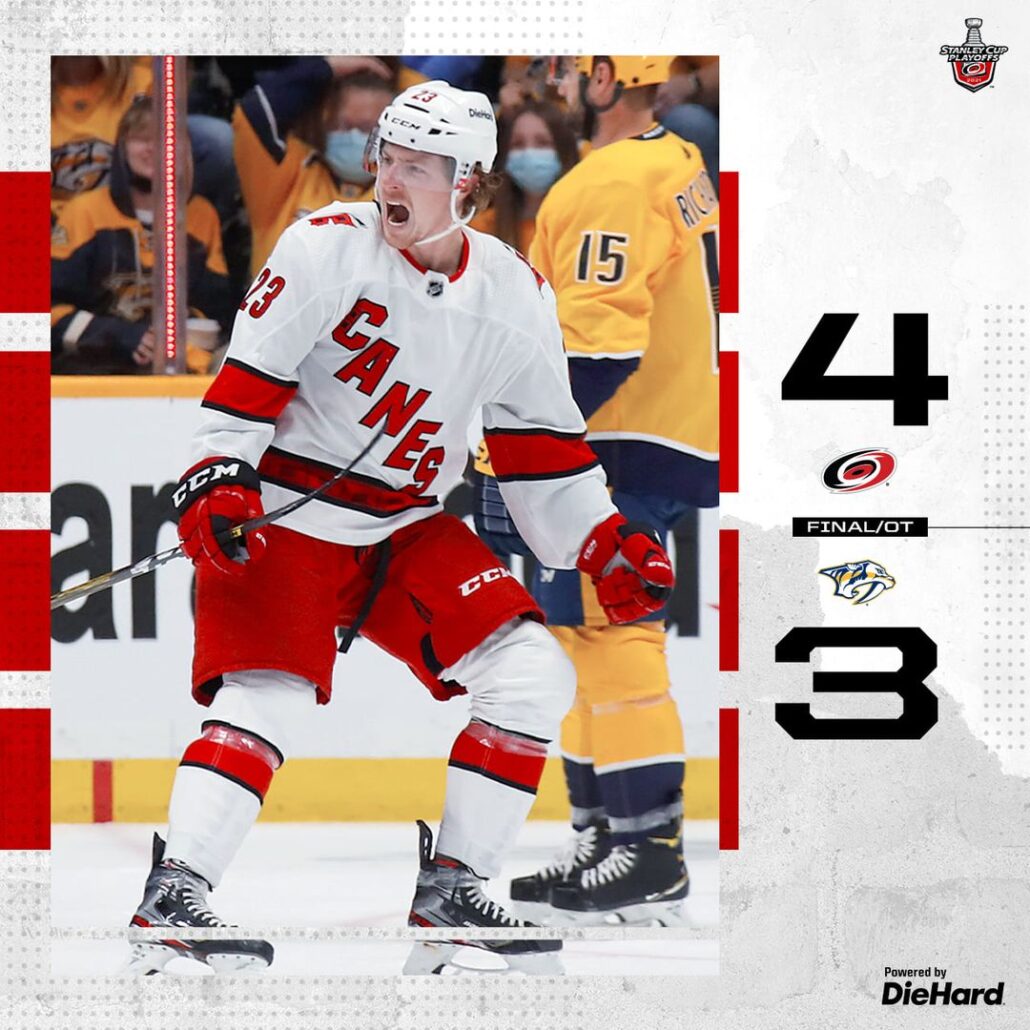 It didn’t take long for the Canes to respond, which had to be a morale booster, and who better than Brock McGinn.

Rod Brind’Amour shuffled lines, partially to get the Preds off their normal coverage and partially to generate offense. Sebastian Aho won a stick battle along the far half boards, skooching the puck to Martin Necas in the corner.

Ginner dug in on top of the crease and saw Necas get pinched along the backboards. He took off to corral the loose puck that was headed to the near corner. Just as Ginner got the puck he made a 0-degree buttonhook, forcing a collision with Necas, Cousins and Alexandre Carrier, allowing Ginner to go behind the net. Turning wide of the net, he whipped the puck into the far top corner for a great-looking individual goal.

Shortly after that goal, the Canes did a masterful job killing off the only penalty of the period, a tripping call on Andrei Svechnikov that Svech objected to but replays did show it was a trip albeit a weak one. Nashville had 11 shots to the Canes 9 in the period which on paper appears to be a closely played game but those figures lie; Nashville clearly had the ice tilted their way.

Having time to reflect on their first-period play during the intermission, one would expect a complete change in every player. Didn’t happen. Another mistake led to another, early no less, Predator goal.

After a dump in that Alex Nedelkjovic stopped behind his goal with time, most players knew the deft stickhandling netminder would take care of business clearing the puck. Ned sent a ¾ hard wrister off the glass above the far half boards that didn’t clear the zone. As players were thinking the puck would clear the zone, most had it in their minds to start going to the north end of the ice.

As the puck bounced off the glass well before the Canes blue line, Ryan Ellis stepped up, quickly and smartly passed to an open Mikael Granlund all alone in the dirty area of the crease who went forehand, backhand then flipped the puck in for another early goal and a 2-1 lead.

No miraculous save this time from Ned as he was left out to dry. Only a few minutes later the Preds struck, again, and again, it appears to be missed coverage that proved to be lethal.

Johansen Makes it a 3-1 Game

After winning a faceoff in the Canes end, the Preds quickly moved the puck with Roman Josi getting a shot off from the left point. Brett Pesce laid down in front of the shot with the puck hitting his leg. The puck careened to the far boards with Granlund and Jaccob Slavin going for the puck.

Slavo blew a tire, taking Grunland down with both sliding into the boards. As the puck squiggled loose, Grunland got up and passed over to Josi uncovered on the left point. He took a stride to the net then saw Ryan Johansen alone off the far corner of the crease and slapped a pass to his stick for another uncovered, easy tip-in. Frustration seemed to be settling in as the Canes were clearly off their game.

Coverage was poor, the Canes seemed to be a stride slower or looked at it another way the Predators true to their name, smelled blood and wanted to take advantage of the “weaker” opponent. Ugly play by the Canes crept in with penalties. Dougie Hamilton took what really was a “good” penalty as interfering Brad Richardson he stopped a high probability scoring chance.

Fishy made life easy for the refs when he tomahawked Johansen’s stick into 2 pieces when Johansen had position. The Canes pulled out a game low 5 shots on net in the period to the Preds 10 which was very accurate as to which team had the better play. 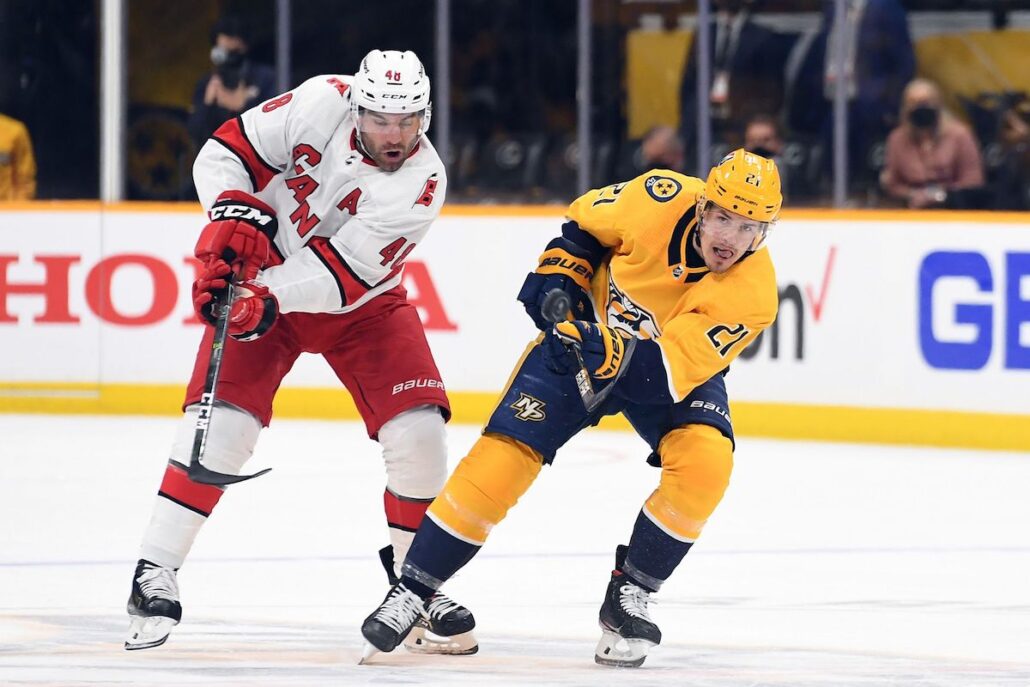 Later in the period, Jordan Martinook, who was one of the Canes having a good game, used his relentless energy to draw an interference penalty by Matt Benning. As Marty went back to the bench, he was VERY vocal to everyone on the bench on not quitting and when Marty speaks in volume, everyone listens.

Like the forward lines were shuffled, Roddy also shuffled the powerplay units. Fishy won a faceoff late in the powerplay, with the Canes attacking around the goal, the puck went to the backboards up to the right point.

Teuvo Teravainen knocked the puck back down low to Fishy, lost the puck but Vincent Trocheck, got it back, losing control when Mattias Ekholm grabbed the puck and put it on his backhand for a clear from the goal line.

Hamilton snared the puck in front of the blue line, went to the middle and cocked his stick for a hard slapper. But then he saw both Troch and Fishy and elected to make a hard ice burner to Fishy for the tip-in to get the Canes within 1. This was a key goal and a game-changer. Brady Skjei got a penalty with 90 seconds left in the period with the now energized PK unit killing that off to end the second.

Canes Come Back with Purpose in the 3rd

Powerplay units love new ice. Passes are crisper, skating is smoother and that generally provides a faster game. Everything you want in a powerplay.

Whatever was said in the Canes locker room during the intermission and by whoever, it worked. Not only did the Canes PK kill the last of the Skjei penalty, the Preds barely got the puck in the Canes’ end. The momentum of the game, which started to turn late in the second, finished that turn in the third as it was all Carolina.

The Canes got off a game high 16 shots which is more than the first two periods combined. If it wasn’t for some stellar play by Juuse Saros, the Canes could have had the game ended in regulation. Every player on the Canes roster had a great period. Forechecking was back in style, passing was sharp and with a purpose, hits were effective.

Martinook, who can play on the edge, said before the game he needed to be careful on his hits as he’s been called for being too aggressive. He had one hard hit on Josi along the far boards that was picture perfect, knocking Josi off the puck. Unfortunately, the hit also knocked Josi out of the game with what appeared to be a leg injury. 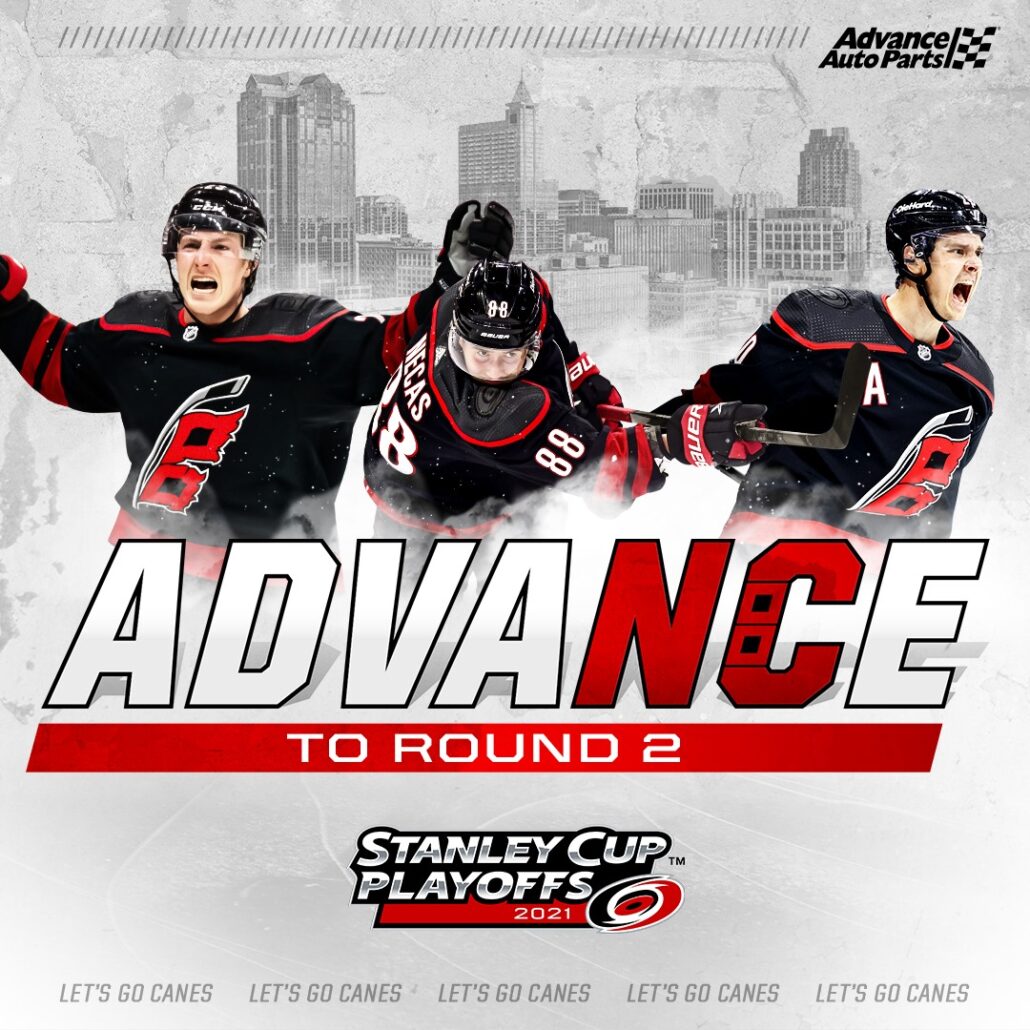 At just under the 14-minute mark, Fishy won a faceoff to Saros’ right. Ginner tapped the puck up to Slavo who saw a lane and went down the left side through the faceoff circle, looked right and barreling down was Hamilton all alone, taped the ice for the puck so Slavo threaded a beauty cross ice that Hamilton pushed in to tie the game.

Fantastic heads-up play by both defenders which if anyone wants to know what ‘chemistry’ is between players, that was it. As the game went into overtime, thoughts were whether both coaches would shorten their benches. We’ll never know that answer as the game came to a quick end.

Jordan Staal won the initial faceoff against Haula but it was the Preds that had the first shot. Ned easily blocked the shot, allowing the Canes to start a charge to the Preds’ end.

After the puck was deflected out of play in the Preds’ end, Fishy won the faceoff with Ginner knocking the puck up to Slavo on the left point. Slavo had a little time and space, waited for traffic then flung the puck to the net which Fishy deflected with 2 mm of his stick, just enough to change the trajectory going in to end the game with only 1:06 gone.

Fantastic finish all due to the no-quit attitude driven throughout this team. Next up is Tampa Bay who, thanks to some goofy rule in the postseason, has a well stacked and well paid team with nearly a $99 million payroll against the $82M cap. Yes, that rule needs to change.