Cary, NC — Hockey is one of those team sports that having a superstar will absolutely help, but all coaches will push to have everyone contribute and last night the true #1 stars of the game were the Canes penalty kill units.

Sebastian Aho scored two pretty goals with Warren Foegele adding a gritty goal and Alex Nedelkovic getting the shutout in just his second playoff game as the Canes did what they set out to do and win both home games, this one by the score of 3-0, to take a 2-0 lead in the best of 7 in the first round.

The big shocker of the night was the game-time decision that Jaccob Slavin advised Coach Rod Brind’Amour, right after the warm up skate, that he wasn’t able to play. Slavo is the consummate professional and the bar he sets for himself is extremely high.

Having him out of the lineup leaves a big void but fortunately, the Canes have several that can—and did—step up their games.

Two, in particular, were Brett Pesce and Brady Skjei. These two were exceptional all night and it may have seemed all night as both were on the ice around 28 minutes with each shift being just about a minute, which is off the charts for hockey. In a typical game, a player may have 2 or 3 shifts that last a minute for a variety of reasons but to have every shift average a minute, with the keyword being “average” as some were much longer, is, well it’s Slavin-like.

The fun part of the playoffs is the number of folks texting me during and about the game. My sister in Connecticut is a big Canes fan, a friend In Rhode Island is a huge Bruin fan but is hoping the Canes go all the way, of course, the caveat is only if the Bruins don’t. My long time best buddy and avid hockey fan in Fuquay-Varina also texted along with another fan in Hilton Head and even other members of the media that normally sit in press row in normal times. It seemed with every new play there was a new text.

Roddy started the fourth line again and why not? They had a great first game, and not that athletes are superstitious, but why change something that was working?

Steve Lorentz won the first two faceoffs and you could see just with his body language that he was more than ready for this game. Dougie Hamilton got off the first shot with the Canes pressing hard in the Predators’ end. After a shot by Martin Necas that Juuse Saros had a glove save for, former Canes Erik Haula, who has said he enjoys being the Caniacs’ villain, went after Necas after the whistle, putting the Canes on an early powerplay.

The only positive of that powerplay was possession as the Canes did possess the puck for nearly the full two minutes but the Nashville PK was solid in not allowing a shot on goal. Five minutes later, Warren Foegele got tripped by Mattias Ekholm giving the Canes the opportunity to correct what went wrong with the first powerplay.

Whoever said what on the bench for improving the powerplay got the desired results. Passing with the first unit was fast and with a purpose. Andrei Svechnikov had the puck along the near half boards, passed up to good buddy Hamilton on the top of the umbrella. Hamilton skated a bit to the center then saw Fishy with his stick cocked and just needed to be loaded so Hamilton teed one up that Fishy one-timed that Saros made a save with the left pad.

Vincent Trocheck and Roman Josi were fighting for the puck behind the net when Svech snuck in and snatched the puck bringing it back up the side, passing up to Hamilton for round two. Fishy was again open on the right, faked a pass then Hamilton passed back down to Svech. Svech looked to the goal and had Saros sliding over to protect the post to his right when Svech made a quick pass to Fishy who had 20 of the 24 square feet of the goal open then smashed the puck in for a 1-0 Canes lead.

After that goal, it almost seemed the Canes were playing down a man for the rest of the period as Cane after Cane was called for a penalty. Some of the calls were questionable which got Roddy pulling his mask down barking at the refs. The call of Aho for roughing Haula was as weak of a call all game with Haula acting so well his ratings were higher than the recent Golden Globes.

The NHL might want to look at that on the game review and there is a possibility that acting, like the Golden Globes, may warrant a fine. 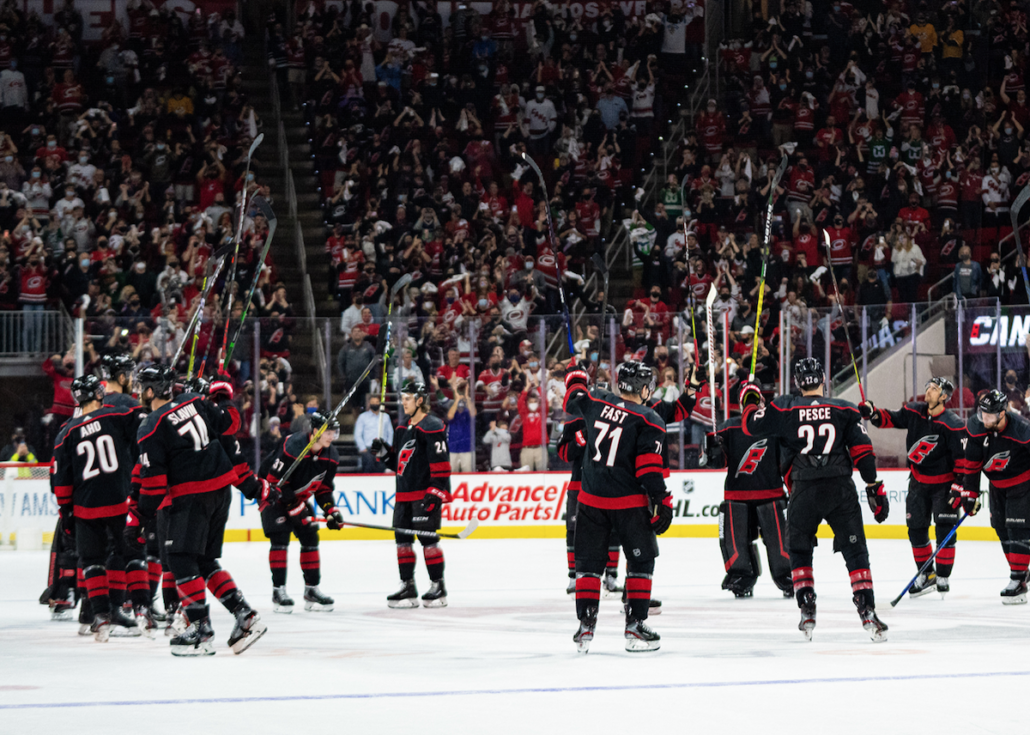 The Canes’ march to the penalty box continued in the second as the choppiness of the game was really starting to show. The Canes were called for 4 infractions while the Preds had 3.

Something is going on between Svech and Ryan Johansen that goes back to at least the last two games of the regular season. Both were called for roughing early in the period and those two minutes to cool off just made them become more careful further in the game. The trash-talking ratcheted up between those two, the grabbing and checks to the back were in full view but the refs figured they’d settle down. The refs were wrong.

Brett Pesce got a call for holding and after looking at the replay 9 times, I’m still mystified by what the refs saw. Getting Pesch off the ice for a Preds powerplay is a gift for the Preds and Roddy must have seen the same replays as he was just a wee bit upset and was letting the refs know they might have made a mistake. The Preds powerplay has some lethal shot-takers and all were engaged.

Ned was not only on his game and blocking everything in sight, his stickhandling for a keeper is far above average and sometimes he plays as if he’s the third defenseman the way he roams out of the crease 20’ to get the puck.

Jani Hakanpaa was also solid on the man-down defense and was throwing his weight around, dishing out a game-high 8 hits and all with a big smile on his face. Brock McGinn and Jordan Martinook were just plain pests upfront, using their relentless speed and aggressive forechecking to make everything difficult for consecutive passes for the Preds.

Part by the penalties and part by desperation, the Preds got off their most shots in a period so far in the series, 15 on net with Ned stopping all. 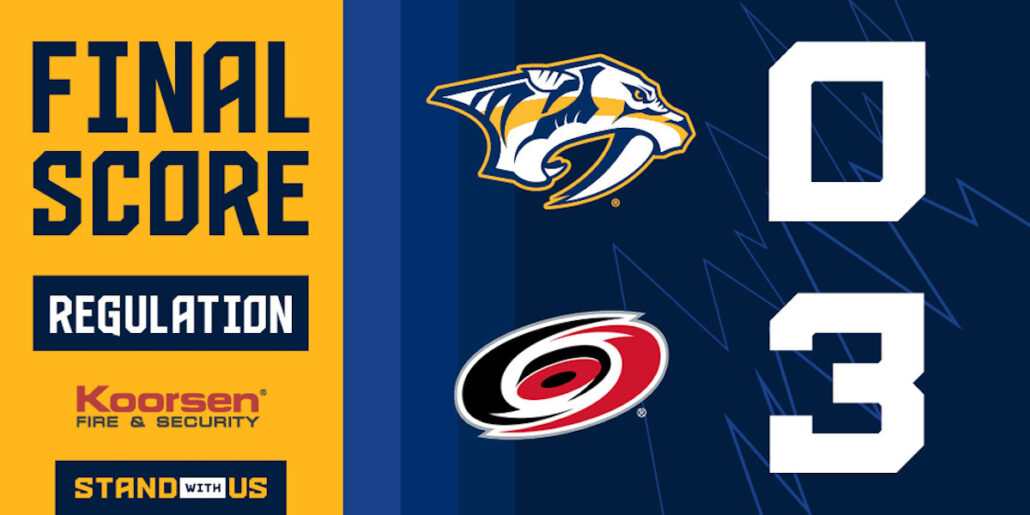 During the second intermission, Roddy had to stress to stay out of the box as the odds of playing a man down eventually will catch up with bad results. The message was received.

Foegs got the only penalty of the period with a delay of game penalty when attempting to flip the puck off the glass out of his zone, had the puck on edge, and had a 9-iron shot over the boards into row K for Kelly. The poor guy froze in his skates when that happened as he knew Roddy wouldn’t be happy especially with only about 10 minutes to go.

Pesch, Skjei and Hamilton were beasts on that man-down defense and while the Preds got off 2 very good scoring chances, Ned made even better saves.

The Canes almost got a short-handed goal when Pesch and Fishy had a 2-on-1 breakaway with Fishy slapping the puck wide by inches. Late in the period with about 2 minutes remaining, Saros headed to the bench for the extra skater. After Ned redirected the puck to the sideboards, Pesch flung the puck 198’ with the puck going wide. Fishy had a heads-up play and turned on his jets, getting to the puck just ahead of Josi, and whipped the puck while in full stride from a bad angle into the empty net.

For the second game in a row, the Canes took a page from a western team’s playbook and doled out 52 hits. Welcome to early first-round hockey. The Canes did what they said they wanted to do—come away with 2 solid team wins on home ice in front of their loyal Caniacs.

Game 3 will shift to Nashville’s home ice on Friday at 7 PM. Go Canes!