Monday I contacted council members to hear of concerns or questions they had about the regular meeting agenda later in the week. The agenda did not include any controversial issues so there were no questions.

Later Monday I met with management and staff to go over the agenda items. The meeting lasted about fifteen minutes.

Following the agenda meeting, I met with the Town Manager and Mayor Pro-Tem to go over several items including historic structures, downtown parking, the federal recovery money, the upcoming budget, the sports center location, and upcoming municipal elections. Our meeting lasted about 45 minutes.

Monday night I attended a meeting of the Wake County Mayors Association. All mayors were in attendance except for the mayors of Garner, Holly Springs, Raleigh, and Rolesville. Some of the topics discussed included increased development, type of development, capped schools, and special municipal projects.

Wednesday I participated in a meeting of the Capital Area Metropolitan Planning Organization’s Executive Board. The mayors were given presentations on an NCDOT Multimodal Connected Vehicle Pilot project, the Triangle Region ITS Strategic Deployment Plan, and the 2050 Metropolitan Transportation Plan.

The board unanimously approved the Wake County Transit Plan update, the Member Designated Project Funding (earmarks) Support Policy, and the CAMPO Projects and Programs Funding update. The meeting concluded after about two hours. The presentation slides are available online to the public. 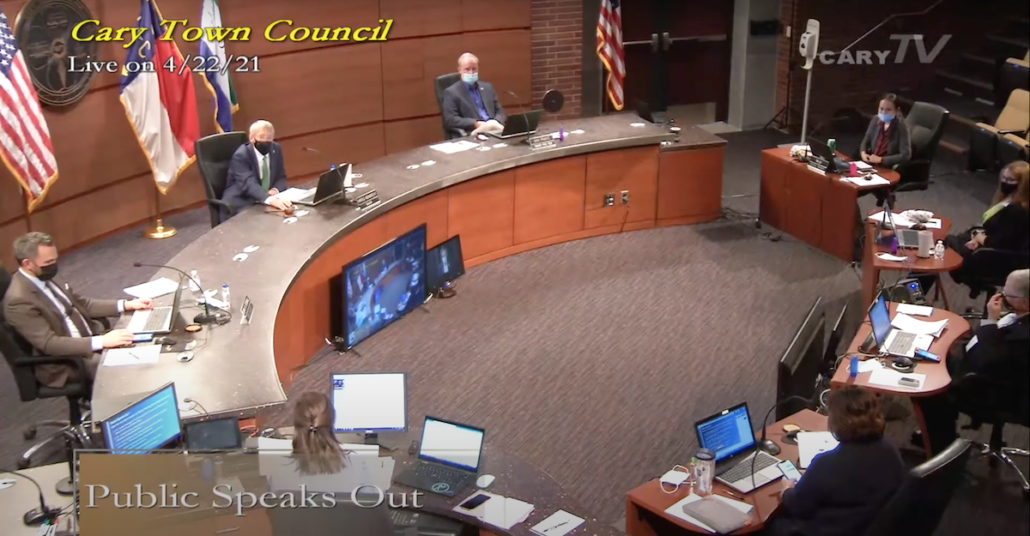 In the redistricting discussion, staff pointed out that a municipality can redraw its districts at any time. This is important since census data will not be available in time to redraw the districts for the October election. Cary has four districts and by law, they need to be within 5% of each other.

Currently, District A is 50% bigger than District C. The staff proposed using town data to estimate the districts. We will see their proposals at our quarterly meeting on May 13. A public hearing will be held on May 27 and the council can vote on this issue at their June 24 meeting. If approved, the new maps will be sent to the Board of Elections on June 25 and the elections will be held in October as planned.

The next discussion was on available land for development. In 2017 there were about 9,100 acres for development. 5% of that was owned by SAS and 31% was in Chatham County. Cary has been developing land at about 2% a year and now has only about 15% of land remaining for development.

In the office land discussion, it was reported that in 2017, 27% of available land was zoned/planned for office. The latest development numbers show that out of 347 acres that have been developed, 14% have been office. Council and staff also talked about the future of office. While some companies will move to more remote work, the demand is high enough that we believe that class A office will remain in high demand.

The work session concluded after a little over an hour.

The council had one speaker who wanted to know what the town was doing for affordable housing. Staff will follow up with him and provide him with information.

Council unanimously approved a staff recommendation to spend $300,000 for a Solar Initiative at the USA Baseball National Training Complex and $200,000 to create an Urban Forestry Master Plan and Open Space Master Plan out of the $1 million budgeted for emerging needs and opportunities.

The council also agreed to the staff recommendation to appropriate $150,000 of federal drug forfeiture fund balance to the Police department’s operating budget for a Tesla pilot program and to utilize already appropriated funds within the Public Works budget to support the $80,000 required for the composting and recycling initiative.

In its final action of the meeting, the Council unanimously approved the staff recommendation to appropriate $13,500 in Community Waste Reduction & Recycling grant funds to improve access to composting in Cary. This grant provides for materials needed to establish and operate a pilot food waste drop-off site at the Citizen’s Convenience Center.

The council meeting concluded after an hour and a half.

Friday I participated in a meeting of the North Carolina Metro Mayors. The following is a summary from the Executive Director:

The meeting concluded after about 25 minutes.

The town manager, Sean Stegall’s report for the week included: 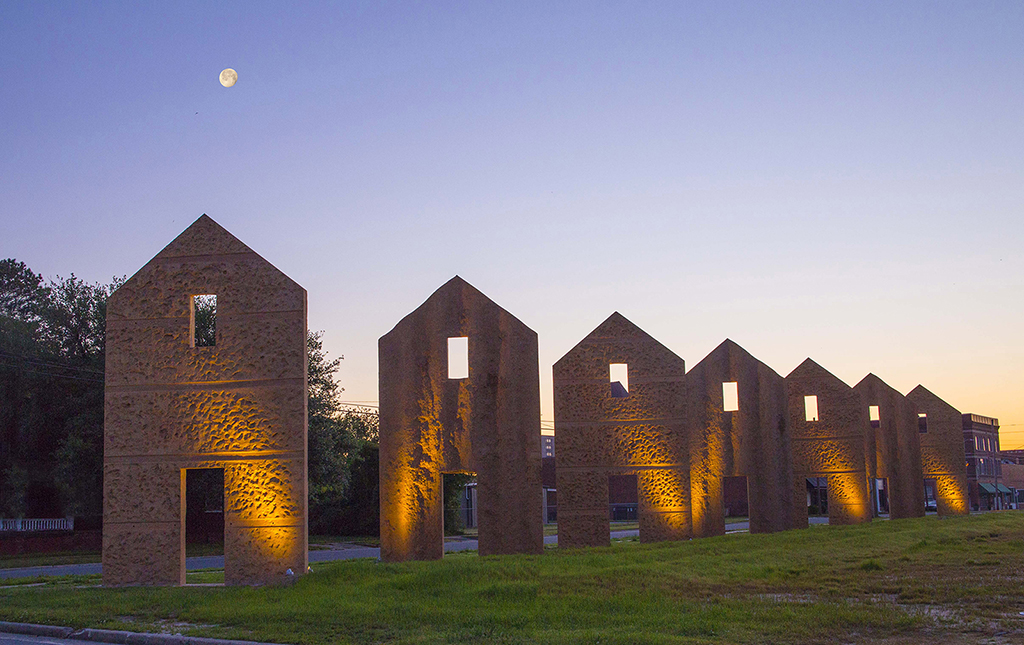 Mayor Pro Tem Don Frantz joined staff yesterday at the groundbreaking of Thomas Sayre’s latest earth casting public art exhibit in Cary, at the intersection of Cary Parkway and Evans Road. Some may recognize Mr. Sayre’s earth casting work from his iconic sculpture at the North Carolina Museum of Art Park. This monumental sculpture will be a great addition to Cary’s public art collection.

Our relationship work with neighboring communities is always active, and this week I had the privilege of assisting Apex in their search for a new Town Manager. The two day assessment and interview process was facilitated by Developmental Associates, and I look forward to getting to know the new manager once they are onboarded.

The rescheduled virtual legislative event is on Tuesday evening and I will see you all there. Stay safe and enjoy your weekend.

During Wednesday’s press briefing, Governor Cooper announced COVID-19 case rates and hospitalizations have stabilized, but are not declining like they were in March. He also reported one-third of all adults in North Carolina have been fully vaccinated and one-half have received at least one shot. In response to these conditions, Governor Cooper announced he will issue a new executive order next week outlining new restrictions for the month of May and he anticipates that by June 1, conditions will allow the state to lift all restrictions for social distancing, mass gathering limits, and building capacities. Mandatory mask use in public settings will likely remain for some time. Lifting the mask mandate is likely contingent on stable metrics and meeting the state’s goal of getting two-thirds of adult with 1 shot. You can read the governor’s press release here. 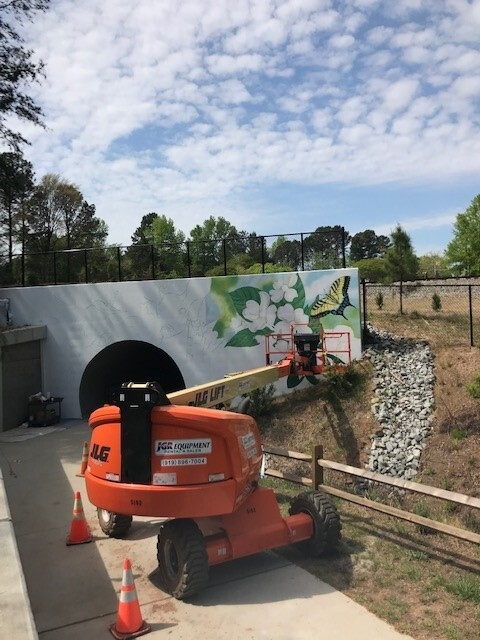 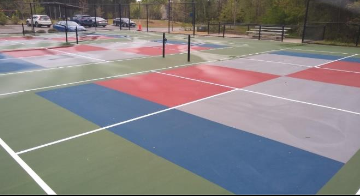 Pickle! Play can resume at the resurfaced and expanded courts at Carpenter Park. As part of the annual maintenance to resurface the basketball and two pickleball courts a third pickleball court along with a new seating area was added.

The renovation provided an opportunity to make the courts multi-purpose to allow for youth tennis by adding color coating (similar to what is at the Cary Tennis Park). The nets and white lines meet pickleball specifications, and the three pickleball courts at the park provide space for residents to work on their “flabjack” or “overhead slam.”

In addition, a soft surface trail is under construction that should be completed by summer. 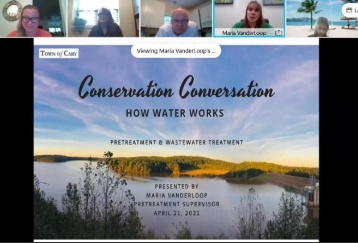 Cary’s Parks, Recreation & Cultural Resources (PRCR) and Utilities Departments partnered in celebration of Earth Day! Together staff created an online program to provide eco-curious citizens an opportunity to have a virtual Conservation about “How Water Works” in our community. The Utilities Department further supported PRCR Earth Day efforts by contributing promotional items to our Celebrate Earth Day kits that will assist households in protecting and preserving the environment while at home. This “One Cary” staff partnership educated and impacted over 175 households that enjoyed learning something new about our award-winning water systems.

Aerial photos of the construction illustrate the scale and complexity of the project. Over 40 people attended to learn more about the project, phasing and schedule. View the webinar’s slides here.

Next week’s activities include staff meetings, an interview about reflecting on Covid, a virtual legislative event with our delegation, a presentation on Cary’s 150th anniversary at the Chamber’s Eye Opener, a meeting of the Economic Development Committee, interviews for the town attorney position, and a meeting of the North Carolina Metro Mayors.

Well, that is all for this week. My next post will be on Sunday, May 2nd.  Although I have Facebook and Twitter accounts those are not the best means of communication with me. Please send all Town of Cary questions or comments to Harold.Weinbrecht@townofcary.org and email personal comments to augustanat@mindspring.com.

Collect Your Deck of Historic Cary 150 Cards
Scroll to top