According to Assitant Finance Director Kimberly Branch, Cary’s general funds remain solid with sales taxes up from this time last year. A focus of Cary’s financial staff has been to support utility account holders that are struggling or unable to make payments.

Since March 2020, all disconnections and cut-offs have been put on hold. In August 2020 a 12-month, zero-interest payment plan became available for accounts delinquent at that time. Coming up in March 2021, the Town’s next step will be making personal calls to non-responsive, delinquent account holders.

“We will let the citizens know that we are here to help with payment plans and inform them of available payment assistance sources,” said Branch. 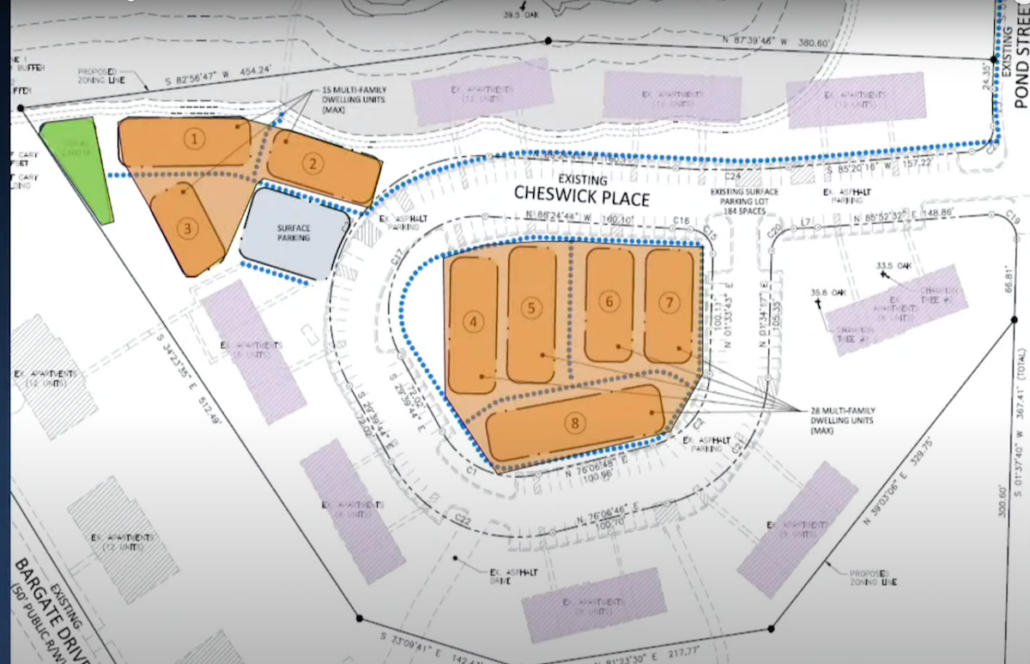 Two parcels totaling 5.75 acres located at Cheswick Place in Cary are under review to be rezoned from Residential Multifamily to Mixed-Use District.

This site is northwest of the Kildaire Farm and Wrenn Drive intersection and includes an existing development previously called the Briarcliff Apartments, built in the early 1970s. The property is now the center portion of the 17-acre Arbors at Cary apartment complex which currently hosts 248 multifamily dwelling units today.

Legal representative of the applicant, Jason Baron, said the new buildings planned are intended to be townhome style.

“One of the things we thought was important to ensure there would be minimal impact to adjacent owners was to only do the increase in density internal to the site,” said Baron.

The following is planned for the site if approved:

“My impression when I look at it is that it’s somewhat jammed together, said councilmember Jennifer Robinson. “It looks like the distance between, for example, buildings 4, 5, 6 and 7 is just the width of a parking spot which is just very, very close.”

Also commenting on the plan maps was Mayor Pro-Tem Don Frantz, asking the developers why the community gathering space is proposed so far to the northwest of the site, so far away from the proposed new units.

With no other comments, this proposal moves to Cary’s Planning and Zoning Board for their recommendation before returning for action in a future Town Council Meeting.

A rezoning proposed along Carpenter Fire Station Road was moved from the content agenda by Councilmember Ya Liu for what turned out to be a 30-minute discussion.

In this case, an applicant wants 14.6 acres at the intersection of NC-55 and Carpenter Fire Station Road to be rezoned from R-40, GC and ORD to Planned Development District Minor. The end goal for the landowner is to bring 300 multifamily units to the site with 1.6 parking spaces per unit.

Plans also include 5,000-10,000 SF of office space and 1.5 acres of open space including a pool, dog park, and seating area. Since the original public hearing for this rezoning plan, landowners have made several improvements including reduced building heights, more streetscape footage, increased EV charging stations and added timing restrictions on office use.

In the Public Speaks Out portion of the meeting, this rezoning request received 2 comments of opposition, claiming that the request is not consistent with the Cary Community Plan 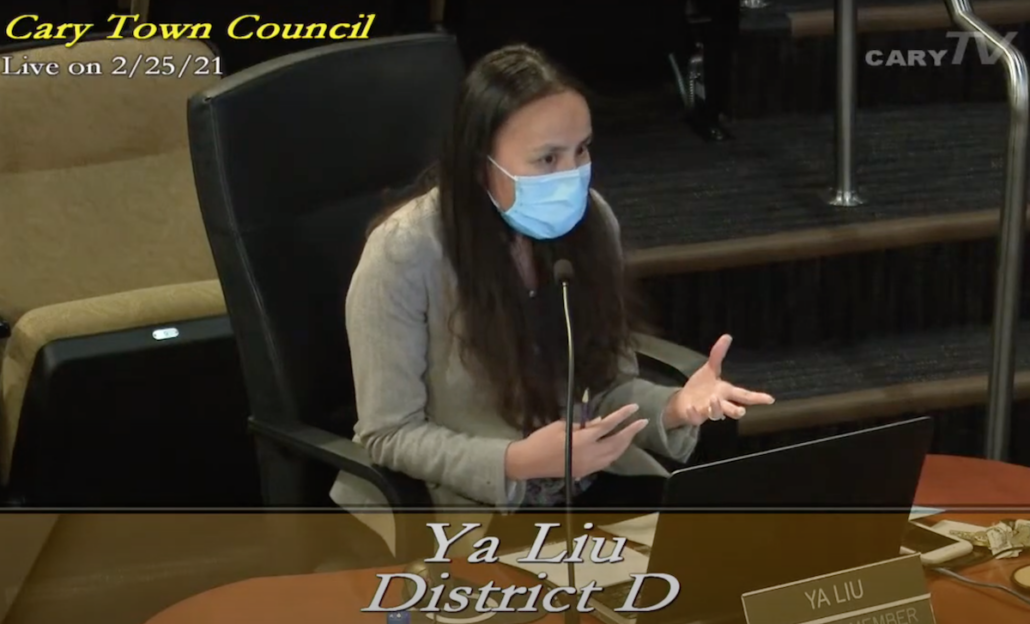 Starting off the conversation was councilwoman Liu who explained why she pulled the item for discussion.

“I want to use this as an opportunity to invite my council colleagues to have a discussion about where we are,” said Liu.

With a sparse amount of undeveloped land remaining in Cary, Liu posed the question to the council of what their collective goal would be in approving this and other similar rezonings. Is it to solve the affordable housing issue? To encourage people to move to Cary? And additionally what environmental standards do they wish to set?

Lui also pointed out an increase in the trend of requests to rezone general commercial and office into multifamily residential units. Could this be because many may feel there is not a market for office and commercial development in light of the pandemic?

“I think she makes a good point about the office. I think it’s worth investigating.”

An additional concern of hers was the 30% parking reduction to 1.6 spaces per unit.

Comments from all council members were shared before the vote, most wanting to see a “better picture” of what it will exactly look like and to get an idea of what the value might be keeping it commercial/office space for future development.

Noting that he was prepared to vote yes, Frantz said these units could help address the housing shortage in Cary and the project is not deserving of a denial in any way. 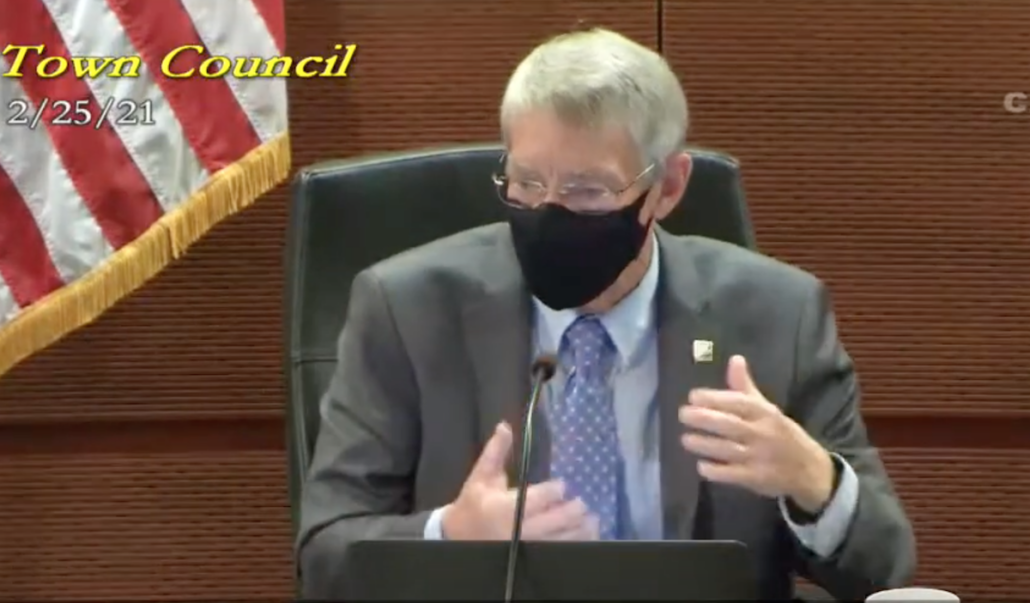 “My problem is the intensity. If you start asking for reductions in parking, buffers and all this stuff, you have too much in one small place,” said Mayor Weinbrecht. “I don’t hate it. I think the use is appropriate. I just think it’s too intense,” he added.

The item was unanimously tabled with no specific date for its return made.

The council moved into a closed session for approximately 30 minutes before adjourning at 8:04 PM.

Take A Storywalk Through Cary Parks
Scroll to top