Cary, NC — Nino Niederreiter led the way on Friday with 2 goals and an assist in a total team effort with a 5-3 win over the Chicago Blackhawks, extending the Canes point streak to 5 games going 4-0-1.

Chicago is supposed to be in a rebuilding year, with a very young team and captain Jonathan Towes out with an undisclosed illness but this young team hasn’t gotten that memo as they’re right in the thick of the race to the top 4 in the Central division.

Patrick Kane continues to do what he’s done over the past 995 games and that’s lead by example on the ice, usually potting a goal or two along the way.

This game was retro sweater night with the Canes donning some snappy-looking sweaters from the old Hartford Whalers with one slight twist in going with a gray background away from the usual white. The old Whalers sweater has been voted one of the best of all-time in the NHL while personally, I think the Blackhawks have the best in all pro sports.

Both teams came out fast with most of the action going end to end with tight forechecking and each defense collapsing around the dirty area, allowing relatively few shots on goal.

Brady Skjei got the only penalty in the first for a love tap type cross-check against Brandon Hagel along the boards behind Reims. The Canes penalty kill teams were very active, with tight coverage and out-muscling the forwards on the crease. 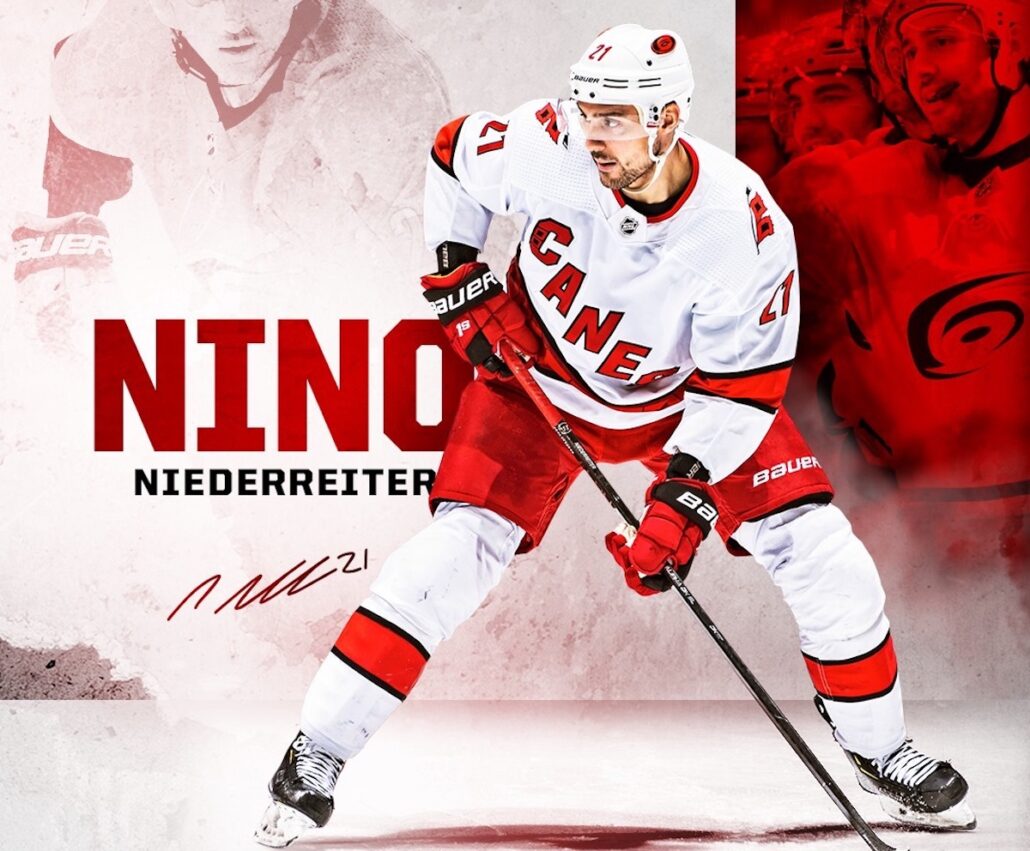 Brett Pesce and Jaccob Slavin continue to be beasts on the man-down defense while Brock McGinn and Jordan Martinook were like noseeums at a picnic, just annoying and wouldn’t go away.

The Canes broke the scoreless game late in the first after an innocent dump in deep along the near boards, Martin Necas went hard at a defender who eased up getting the puck, poked checked the puck away allowing El Nino to snare it just above the faceoff circle.

Nino quickly passed up to Slavin as he crossed the blue line. Slavo settled the puck and looked to the goal before passing back to Nino. With the puck on his stick, seeing Vincent Trocheck battling for position off the right post, rather than hope for a tip-in, El Nino saw an opening.

He sent a wicked wrister that was 20″ wide of the net but luckily hit a defender’s leg, bouncing in to get the Canes on the board. It’s like calling 8 ball side pocket.

Early in the second, the Trocheck line was on the ice with both Troch and El Nino battling with 2 defenders along the far half boards. Nino knocked the puck loose, took a stride then backhanded a pass to Troch inside of the faceoff circle.

The Blackhawks defense did a good job blocking the lane so Trocheck passed the puck to rookie defender Jake Bean cutting down the right side. Beaner didn’t have a good shot but kept possession went deep next to the goal making a pretty backhand pass to Troch in the mid slot who buried a wrist shot to put the Canes up by 2.

Most coaches will tell you on a game that’s 2-0, the next goal is the most important goal. Any team with Patrick Kane is never out of a game and it was Kane who got the Hawks with another highlight-reel goal. Kane only had Pesce between him and the goal with Pesch doing a good job keeping Kane out of the slot.

Not a problem for Kane as with his back to the goal faked right then did a patented spinorama backhander that Reims hit with his blocker but the puck still found the net. That may have been the spark the Hawks needed as they had an extra step in their skates after that goal.

Very late in the period, the Canes cleared the puck out of their zone with Kane snaring it just as he hopped over the boards on a line change. Kane passed to David Kampf who carried the puck in the Canes zone on the left side passing up to Ian Mitchell joining the play as he crossed the blue line.

Mitchell took a slap shot from 35’ out that surprised Reims to knot the game at 2 with just 11 seconds left in the period.

Slavin Nets First of the Season 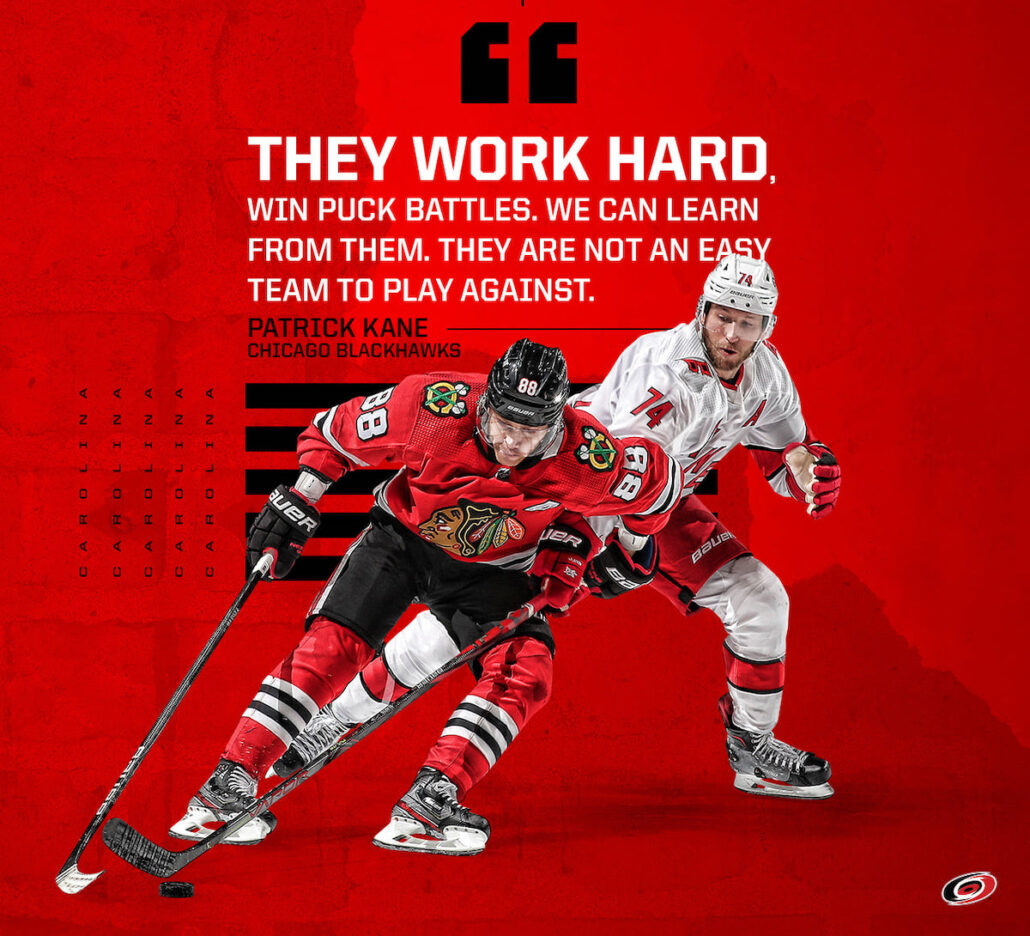 In between periods, Roddy told the team to continue to play their game and not let the last goal in the second change their play. Smart advice as the Canes continued with an attacking style of hockey getting a game-high 16 shots on net.

The Canes aren’t known for being among the most physical teams, doubled up on hits 24-12 with Warren Foegele, Troch and newly acquired Cedric Paquette each banging up 4 hits apiece. Former Cane and beer expert, Calvin de Haan led the Hawks in hits with one being on Brock McGinn that saw both breaking out in smiles after the homecoming.

Jesper Fast (aka Quickie) drew a slashing penalty from Dylan Strome giving the Canes their second powerplay. Teuvo Teravainen won the faceoff drawing it back to Jake Gardiner with Gards holding the puck up high to allow for the man advantage unit to set up.

Gards passed over to Necas inside the far faceoff circle who sent a one-timer slap shot towards the goal. The puck hit the crossbar ricocheted straight up with players from both teams charging the net. With the luck still in the air Quickie and de Haan battled for position with the puck hitting the former Cane as both went into the net for a 3-2 Canes lead.

Late in the period, Adam Boqvist tripped Pesce allowing the Canes to put the game out of reach. The second man-advantage unit was on the ice for the last minute of the powerplay with Necas taking a shot from the same spot on the previous powerplay.

His time the shot was blocked in front but Quickie snared the loose puck sent a greasy backhander across the crease to El Nino who flipped it in for his second of the game and more importantly a 2 goal Canes lead. The Hawks pulled their goalie after winning the ensuing faceoff giving them an extra skater in the Canes end.

With a quick stick, Slavo intercepted a sloppy pass in the mid slot then wasted no time to lift the puck high and straight sending it 180’ into the empty net for a 3 goal lead virtually sealing the game. Quickie gave little life to the Hawks as he was called for hooking with a minute to go. 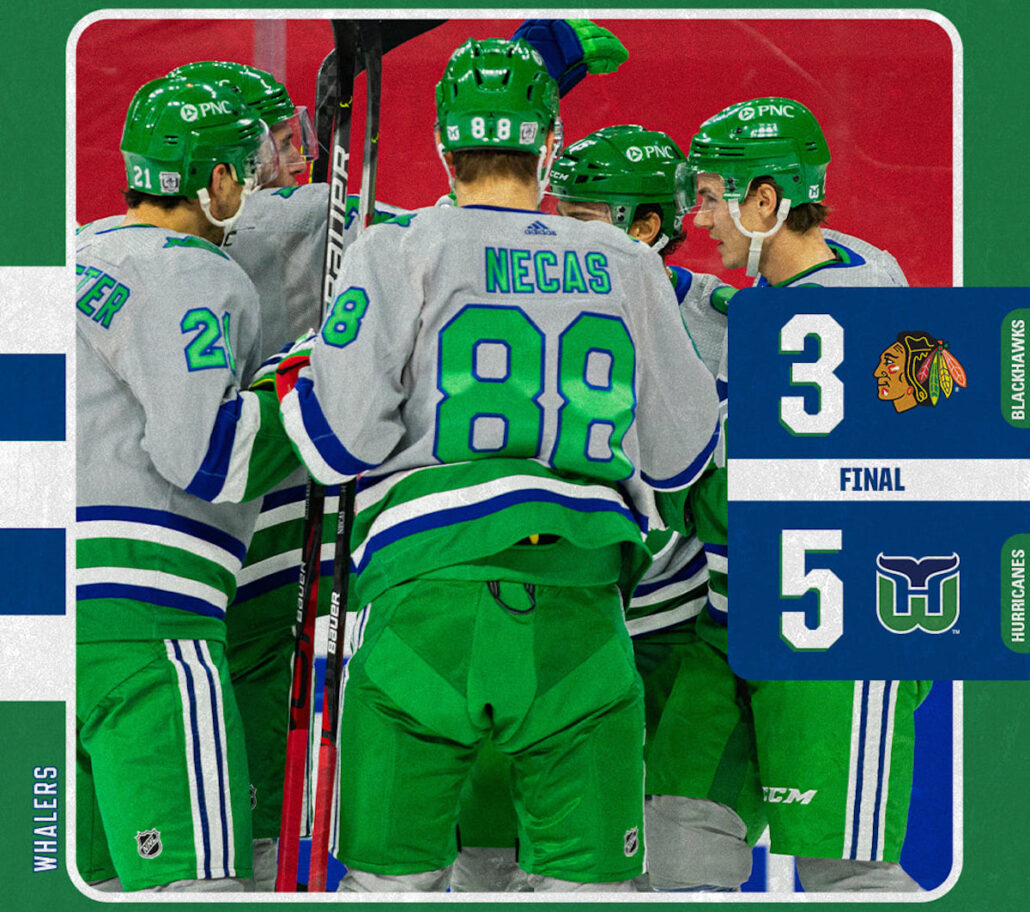 The Hawks again pulled their goalie for a 6 on 4 situation. The Hawks won the critical faceoff drawing it to Boqvist on the point who played catch with Carl Soderberg down low. Boqvist got the puck back passed over to Kane on the right point, skated to the center inside the blue line sending a slap wrister into traffic that bounded off Soderberg’s shin pad for the final tally of the game.

While Dougie Hamilton didn’t get on the scoreboard, he had a great game also getting a game-high 8 shots. Prediction: he’ll get his first goal next game.

The next game recap will be of Saturday nights that was against Tampa Bay rather than the Blackhawks. With all the Covid affected games, schedules will continue to be adjusted to make sure every effort is made to get all 56 games in for all teams.

Trader Joe’s May be Expanding to Morrisville