Cary, NC — The Canes won the first game of the series in Columbus with a wild 6-5 win on Super Bowl Sunday before falling 3-2 the next night.

The Hurricanes scored a touchdown amount of goals on the front end of the 2-game series. Of the six goals, all were needed to come out on top with the Columbus Blue Jackets who tallied 5 on Super Bowl Sunday.

Sebastian Aho’s good friend, Patrik Laine, both opened and closed the scoring on what turned out to be a game that both coaches were both sure to make adjustments from in the next day’s rematch. Both head coaches Rod Brind’Amour and John Tortorella emphasize responsible defense over wide-open offensive strategies.

Before the game, Brind’Amour stressed the need for special teams to be better as the penalty kill squads yielded 4 goals on just 7 opportunities in the previous series in Chicago. The Canes killed off the game’s first penalty by Aho, but just 23 seconds after that penalty ended, Andrei Svechnikov got a weak call for tripping. 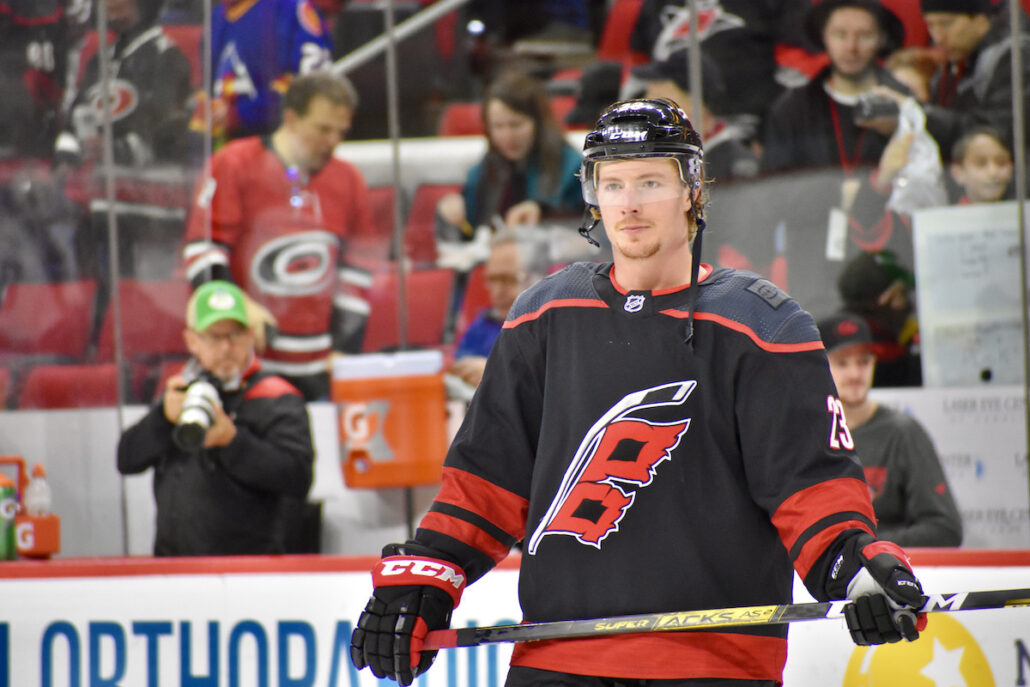 The PK started off looking good as they broke entry plays 3 consecutive times but the Jackets were able to set their umbrella on the fourth try.

With the passing going around the perimeter, Laine set up on top of the far circle with his stick cocked and ready. Seth Jones made the final pass into the sweet spot and Laine slammed it home, looking like a young Alex Ovechkin, for the 1-0 lead.

The Canes responded just 25 seconds later with Svech winning a battle in the corner, passing to Aho in the far circle who made a fast pass to Brock McGinn. Crashing the left side of the net, McGinn squatted low, giving enough lift to make sure the puck was over the pads of goalie Joonas Korpisalo. 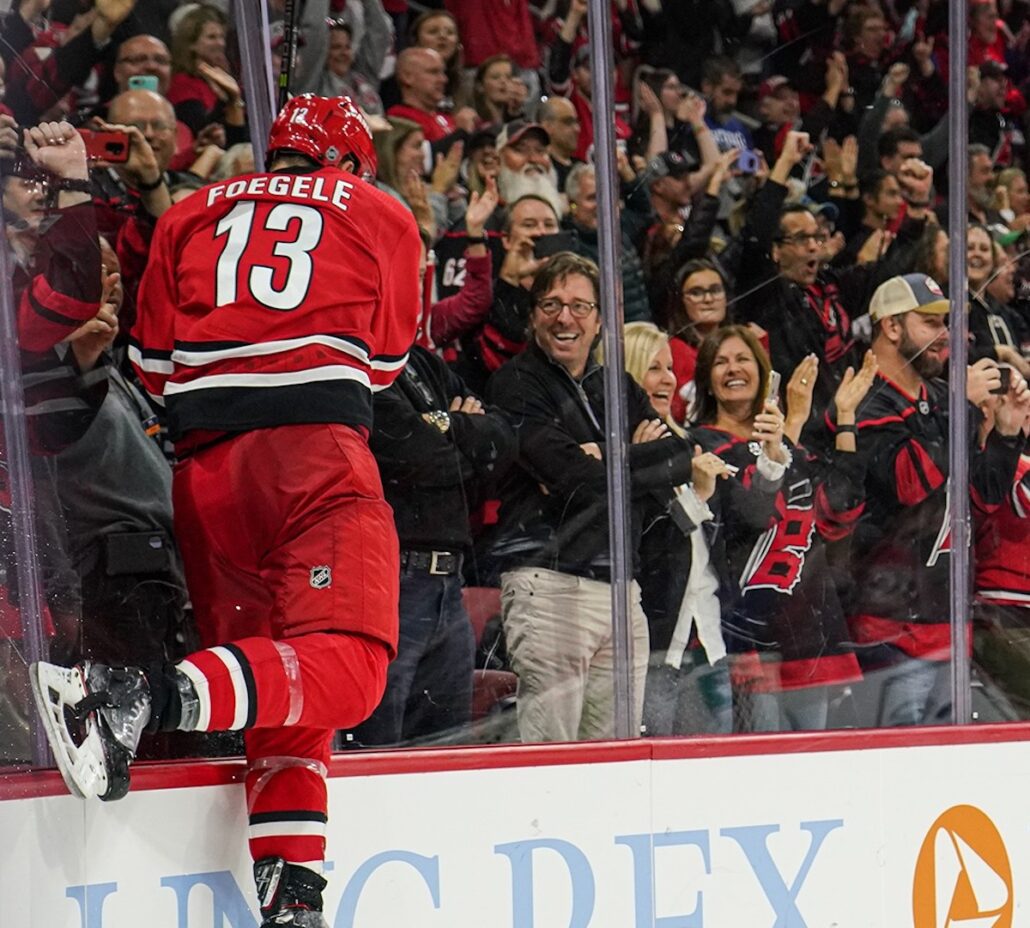 At 15:34, former Canes player Riley Nash put the Jackets up by 1 after tipping in a shot by Nick Foligno who initially grabbed the puck as a memento, thinking it was his own goal, for his 200th career goal.

Warren Foegele tied the game at the 7:23 mark of the second period after a fine play by Ryan Dzingel who hit a backhand pass back to Jordan Staal. From behind the net, the captain bounced it to Foegs on the top of the crease. Foegs swatted the puck into the goalie’s pads but quickly hit the rebound in to knit the game at 2 apiece.

Foligno did get his 200th career goal in the 15th minute on a wrist shot that James Reimer would want a second attempt at as it was more of a surprise than a highlight goal. Whoever had Brett Pesce in the “Canes first defenseman to score pool” finally can collect as Pesce scored only two minutes later from high on the right point off a pass from Jordan Martinook.

Trocheck Clenches Lead for the Canes 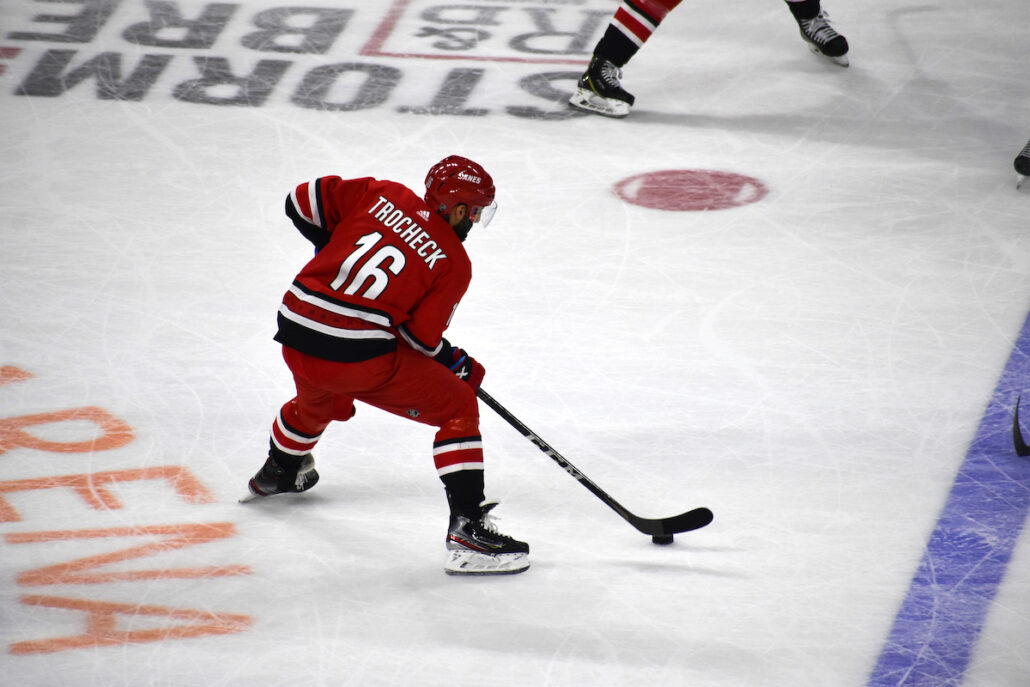 Another 2 minutes later, the Canes got their first lead of the game after Brady Skjei pinched way down low to the goal line to knock the puck to Vincent Trocheck. Tro made a precision pass up to Pesce on the far point who sent a bomb into traffic. The puck was blocked in front with Tro picking up the loose puck, wristing it over the pads for the 4-3 Canes lead.

That goal led to a major controversy that will probably be talked about for some time. Columbus challenged the goal on the premise that Trocheck entered the zone ahead of the puck. The refs went to the box to listen to Toronto review the play and surprisingly made a quick decision it was a good goal.

While I thought the TV replay showed that Tro did indeed enter early, the refs made their decision. Losing the challenge cost the Jackets a delay of game penalty, playing a man down for the last 1:15 of the period. The good stat was the Canes held Columbus to just 3 shots and the bad stat was they scored on two of those shots.

Refs Admit They Were Wrong in Rare Call

The start of the third had a weird twist with no explanation to the broadcast crew. The refs talked to both benches and admitted on the challenge for offsides on the Trocheck goal that Toronto looked at the wrong replay and the correct replay showed Tro was indeed off by an inch or two!

Admitting the error, they cannot, or would not, take the goal back but would wipe out the remaining 45 seconds on the penalty. Questions about this will feed hockey blogs for weeks: how often does this happen, has a penalty ever been cut short by a ref, and what would’ve happened if the Canes scored on that powerplay?

All valid questions, but suffice to say this is one of those very rare times a huge error went the Canes way. 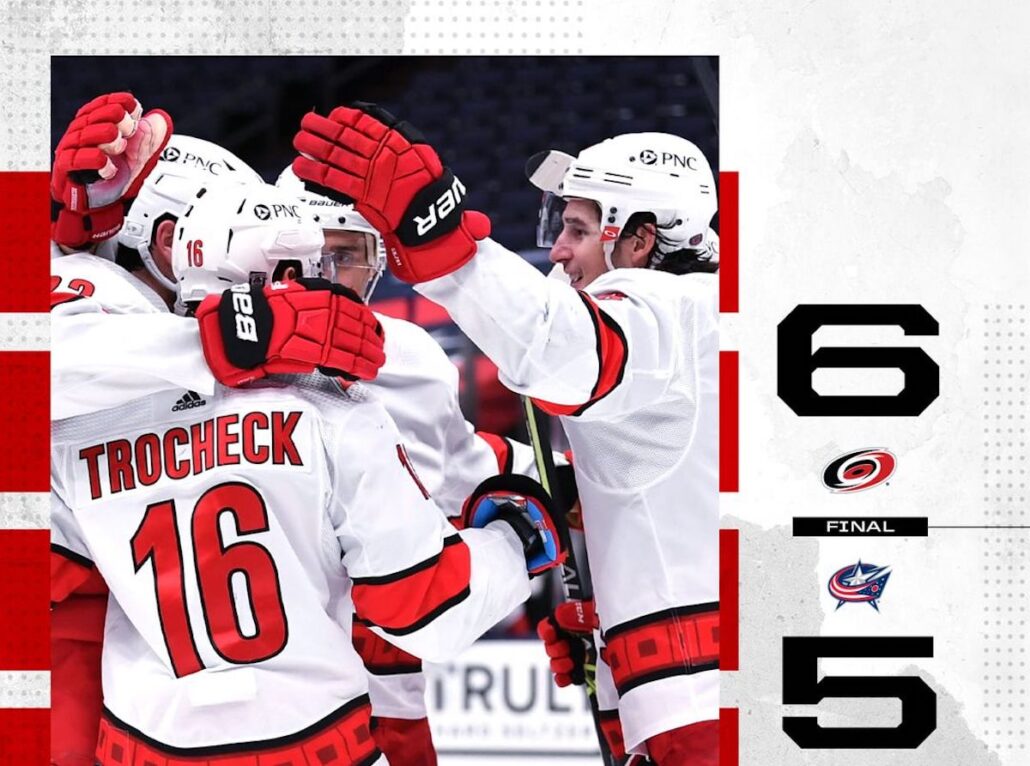 Max Domi scored just after the 2-minute mark of the third. After the Canes missed assignments in the neutral zone and continued the poor coverage in their own end, Domi was left all alone on Reimer’s left.

The Canes finally got a powerplay goal after Dougie Hamilton sent a bomb from the left point with the shot first touching Tro then Staal tipping it in for a 5-4 lead.

A little over midway in the period Staal and DZ did hard work along the boards then getting the puck up to Hamilton. Dougie scanned the lay of the land, wanted to give time for Staal to get to the crease so he chipped a 9 iron shot to the dirty area. But, as luck would have it, the puck went in for a soft goal and the Canes’ first 2 goal lead.

Laine Makes it a 6-5 Win for the Canes

Tortorella pulled Korpisalo with about 2 minutes to go, giving the Jackets the extra skater. Just like the first goal of the game that seemed like weeks ago, Laine scored exactly like his first, a one-time slap shot from the top of the far circle. Hamilton got called for a weak slashing penalty with 39 seconds left but the man down defense, with excellent play by Haydn Fleury, killing it off.

Jackets Even Series With 3-2 Win on Monday 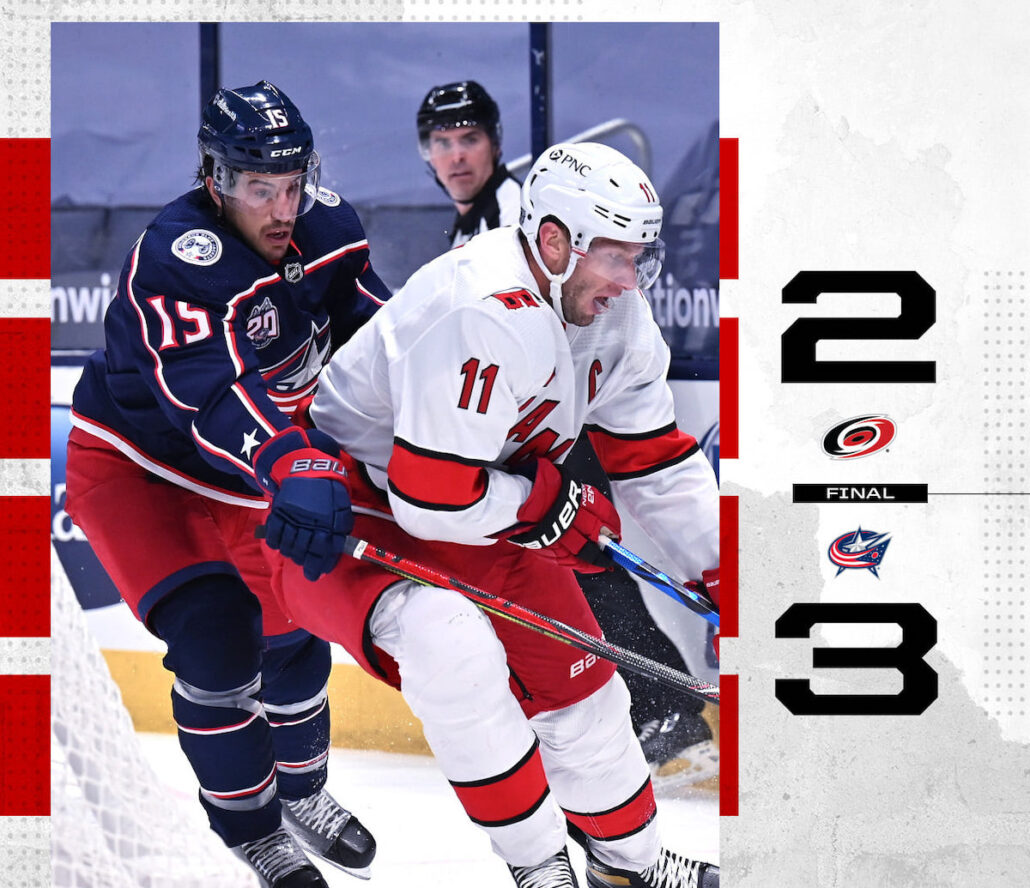 On Monday night, both coaches made adjustments to stress the wide-open game on Sunday would not happen again.

Tortorella, who is the coach that, by far, provides the most entertaining and unpredictable interviews, was mystified about the challenge for the last game but more so, commented on the speed, forechecking, quality coaching and overall quality and skill of the Hurricanes.

He said after reviewing the tape further, he would make adjustments and it showed. Likewise, Rod Brind’Amour made his own adjustments including a game-time decision as Trocheck had a lower-body injury and was unable to play.

Because of salary cap limits, no forward could replace him so Roddy was forced to go with 11 forwards instead of the usual 12. All the forwards got more ice time with Morgan Geekie having just under 9 minutes and all others in the upper teens.

Just having one less forward makes a huge difference in playing time but also with line combinations. Normally players prefer to have the same linemates as they learn each other’s games but obviously can play alongside anyone. However, you could see some missed assignments or passes that went to a spot but no teammates around.

Nedeljkovic Gets The Nod

Alex Nedeljkovic was in goal for the first time this season and just the 6th time of his NHL career.

The Parma, OH native would have liked to have family and friends attend the game but was still happy for the opportunity. The game, as expected, did start as a tight-checking game. Both coaches seemed to be singling out players to talk to after their shift, probably on improvement for coverage.

The Canes defense appeared more dialed this game than the previous game. Jake Gardiner has really stepped up his game compared to last year, his first with the Canes, and maybe just more used to Roddy’s style of respectable defense combined with an appropriate offense.

The Jackets scored late in the first period off a lucky bounce. Kevin Stenlund carried the puck around behind the net passing up to Scott Harrington to the left of the faceoff circle. Harrington flung the puck towards the net with the puck hitting Andrei Svechnikov on the leg, the puck popped high, hit Svech’s shoulder on the way down trickling into the net.

Niederreiter and McGinn Get Greasy Goals 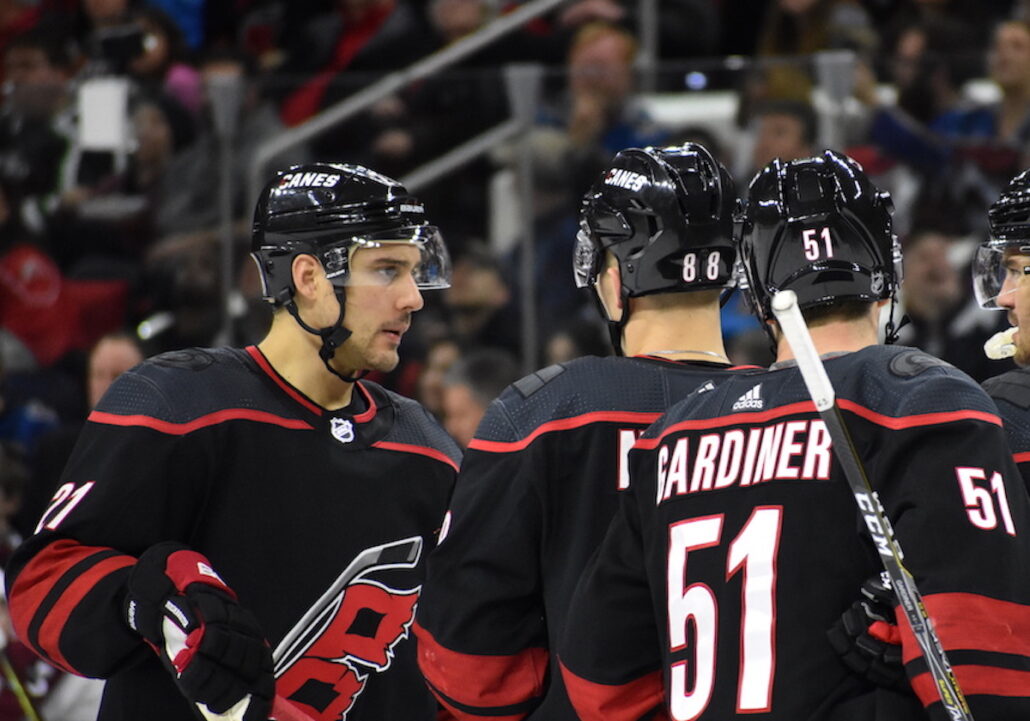 The Canes tied it early in the second on another bouncing goal. Jordan Martinook forced a turnover inside the Jackets blue line keeping the puck in the offensive zone with the defense pushing it back for a reset. Nino Niederreiter beat his defender to the puck, extended his stick with one hand to touch the puck to the goal.

Joonas Korpisalo kicked the puck out hitting Nino’s knee ricocheting back into the goal to tie the game. Midway in the period, Svech’s hard play drew a hooking penalty by David Savard. The Canes won the initial faceoff but Cam Atkinson who rather than dump the puck 160’ decided to skate the puck towards the Canes end.

Just as Atkinson crossed his blue line, Teuvo Teravainen extended his stick to slow Atkinson while Dougie Hamilton was parallel with Atkinson and gaining speed. The refs called Teuvo for a hook but in an unusual call, called for a penalty shot. Atkinson scored on the shot but that call did not fool anyone into thinking this was more of a makeup call for the other obvious error the same officiating crew did the night before.

On another line that was juggled together, Martinook won a faceoff drawing it back to Jacob Slavin. Slavo deked right, went left then sent a shot into the traffic in front of the crease. The puck hit a body in front with Marty touching the puck over to Warren Foegele who is a shoot-first type of player but his shot was blocked by a skate just above the crease. The puck squiggled right when Brock McGinn dove after the loose puck swatting it in while horizontal in the air to tie the game.

One Let Down Leads to Jackets Goal 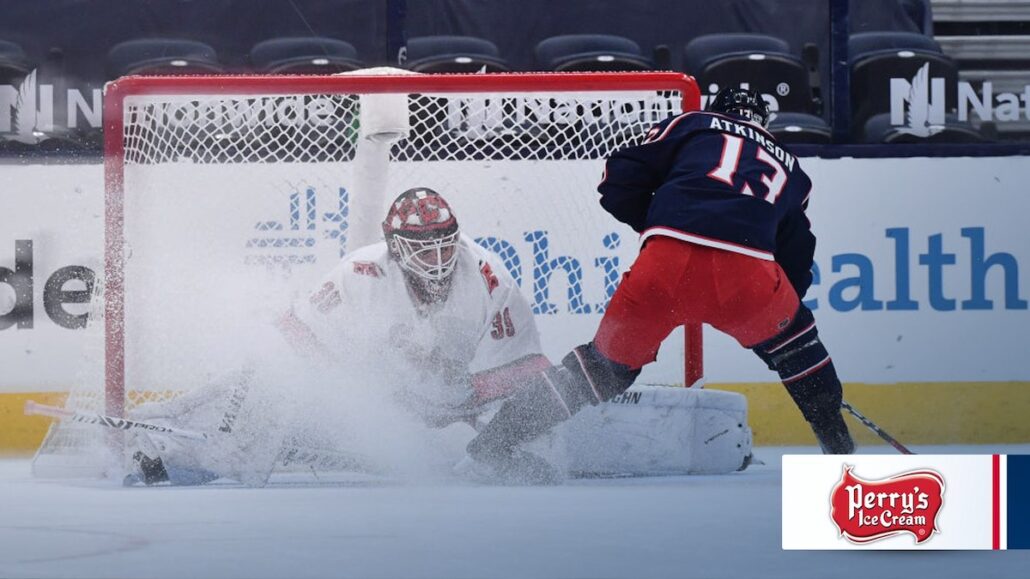 The third period was set up to see some tense hockey with both coaches stressing to limit the number of mistakes. Unlike the previous game, this game had very few penalties, the Canes had just one powerplay while the Jackets had one powerplay plus the costly penalty shot.

I viewed it both as better disciplined play along with the officials’ whistles to let the boys play. With this season so short and every point so critical, the last half of the third didn’t appear to be one in which both teams were willing to go to overtime but someone needed to step up.

Turns out, Jack Roslovic, who was the afterthought in the trade for Patrik Laine, went from the neutral zone into the Canes end, after making a sweet move, stickhandled between Brett Pesce and Ryan Dzingel to go in on Ned all alone, fake left then slid the puck under Ned for the game-winner.

Ned said after the game he needed to make that save and probably learned a valuable, but costly, lesson for the future. Ned had a great resume but is learning the NHL step up from the AHL is a big step. He’s certainly capable, does have NHL ability and while Mrazek is out will have to find his NHL game.

The next game set starts Thursday giving the Canes a chance to regroup and hopefully give Trocheck time to get over his ailment as that was a big void in the lineup.

Cary History: Surviving the Great Depression as a Child
Scroll to top