Cary, NC — The majority of last night’s town council meeting was spent discussing two rezoning requests that both seek to bring more housing to Cary. But first, a few sweet moments were had at the start of the meeting.

Cary Mayor Harold Weinbrecht announced the 2020 Hometown Spirit Award winner to be Brent Miller. Miller was nominated and voted for by Cary Citizen based on his community involvement.

Outside of his avid event volunteering over the years, Miller has been a member of the Friends of the Page Walker since 2006, has served two terms on the Planning and Zoning Board and has served on the board of directors for Cary’s Emergency Medical Services.

Other nominations for this year’s award were Pat Galloway and Janet Holcombe. 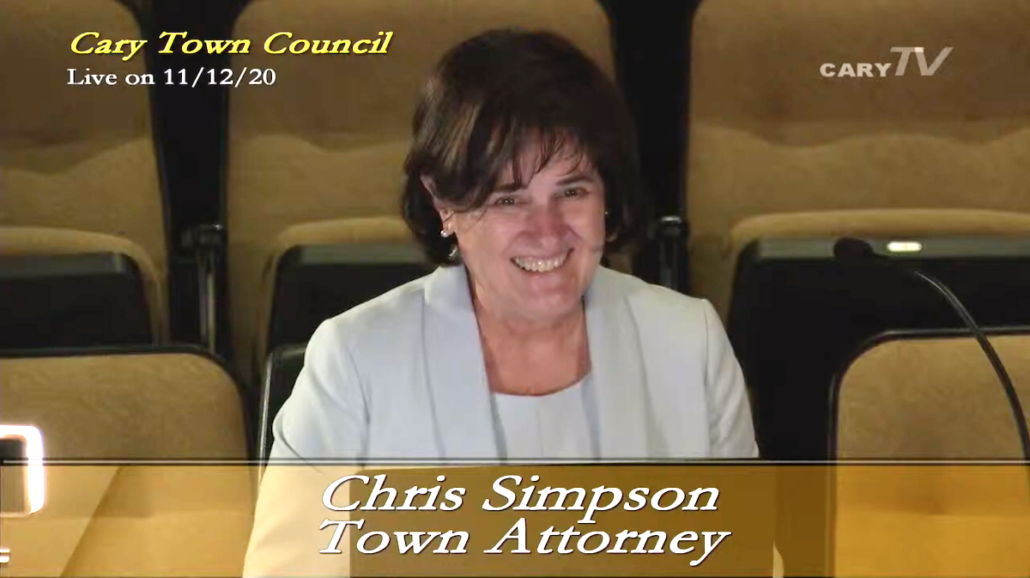 A surprise addition to the agenda last night was a proclamation that was presented to Chris Simpson, Cary’s Town Attorney who is retiring after more than 21 years of service to Cary.

“We’re so grateful for her dedication for all these years of service and her friendship. She is going to be sorely missed,” said Weinbrecht before reading the full proclamation.

Simpson enjoyed a successful career in Washinton D.C. and with various law firms before joining the TOC staff in 1999. She was appointed to the role of Town Attorney in 2005 and has served in that role ever since. Following a standing ovation in her honor, Simpson shared a few words.

“I need to thank you for giving me the chance to have a wonderful career. You’ve given me a chance many lawyers, if not most, would give anything for — and that is to represent a client they respect, trust and in my case, love,” said Simpson.

A second and highly emotional proclamation was made last night to recognize November 19, 2020, as World Pancreatic Cancer Day in Cary. This declaration hit home for several of the council members, one in particular who has a family member battling it.

The declaration was made unanimously to bring awareness of the disease that as of 2019 has become the third leading cause of cancer deaths in the U.S.

“Our hearts go out to everybody whose families are suffering from this,” said councilmember Robinson.

The Town will honor this day by lighting the downtown fountain in purple, the designated color for Pancreatic Cancer ribbons, on November 19, 2020.

Adjacent to Green Level High School in west Cary, just above the border into Apex, is a 6.02-acre tract of land at 7436 Roberts Road. The property is currently zoned by the town as 40 Watershed and an applicant is requesting to have it rezoned for “Transitional Residential Conditional Use and Watershed Protection Overlay District.”

The developer making the request proposes the following conditions:

“The applicant would be required to provide the typical 50 foot, type A residential streetscape but has not offered any additional screening along Roberts Road,” said Town Planner, Erin Puckett.

Council in Favor of Request, Moves to P&Z Board 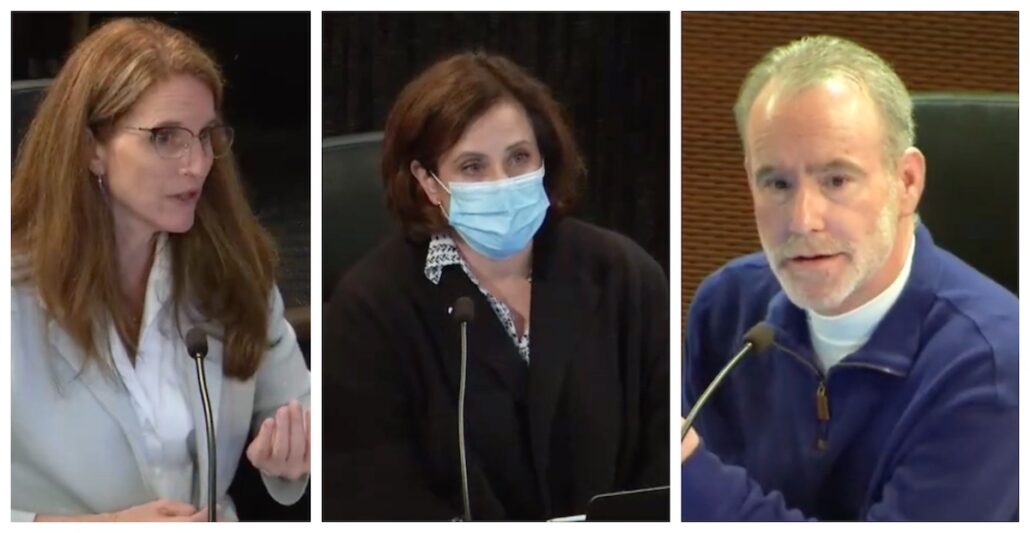 While no citizens submitted comments or called into the public hearing, three councilmembers expressed comments, all with positive outlooks on the rezoning.

“I really appreciate the fact that the people who are thinking about developing this land are putting into conditions some elements they think would help ensure the quality of their product,” said Councilmember Jennifer Robinson. Noting that there are some concerned residents adjacent to this land, she added, “Of course we’ll be open to hearing everybody’s opinions on both sides.”

Mayor Pro-Tem Don Frantz added his support saying the plan lays out a nice transition from the school to affordable, single-family housing.

Councilmember Lori Bush agreed, adding that it would be nice to find out if there’s any other traffic or road improvements that will be planned there before people move in. This, she said, stems from hearing concerns of residents living near Green Hope High School and backed up carpool lanes.

The request titled, 20-REZ-05 Roberts Road Residential, now moves to Cary’s Planning and Zoning Board before returning to the council for action. 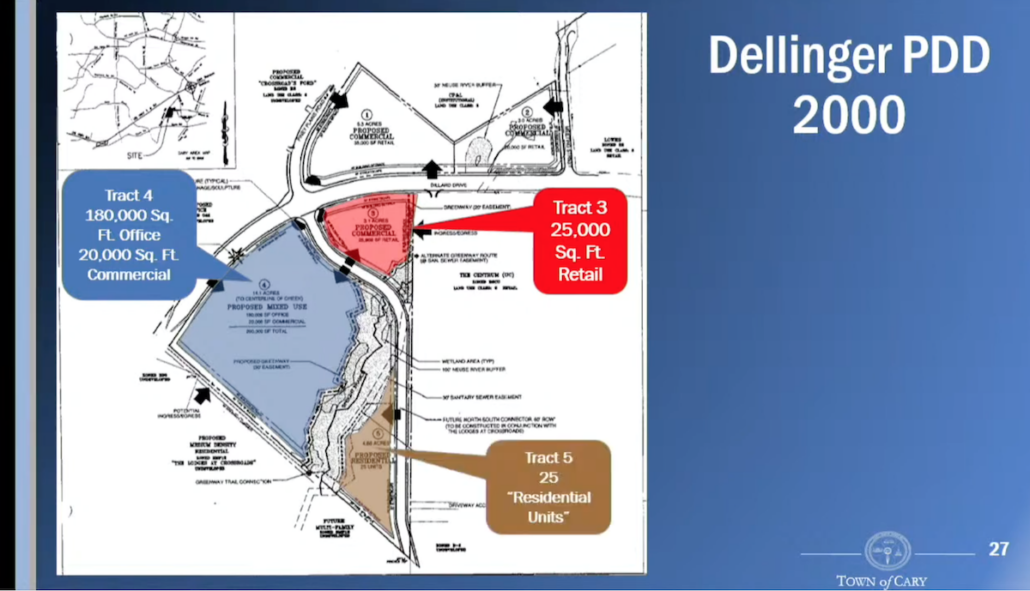 Map rendering that shows the previous plan for the three parcels of land, designated in 2000.

In the second and final public hearing of the night, the Dellinger Planned Development District that was originally approved by the council in 2000 was revisited for changed usage.

The 23-acre development is broken up into six different parcels of land, three of which have been developed into a storage facility and 18,000 SQ of commercial use on the north side of Piney Plaines Road. The remaining three tracts of land across the street were slated for predominantly office and commercial with smaller areas of residential and retail.

“Basically what is proposed by the applicant is a shift from a predominantly office use to residential multi-family use with some component of office and the designation of residential use on tract 5 as being townhomes,” said Assistant Planning Director, Debra Grannan. 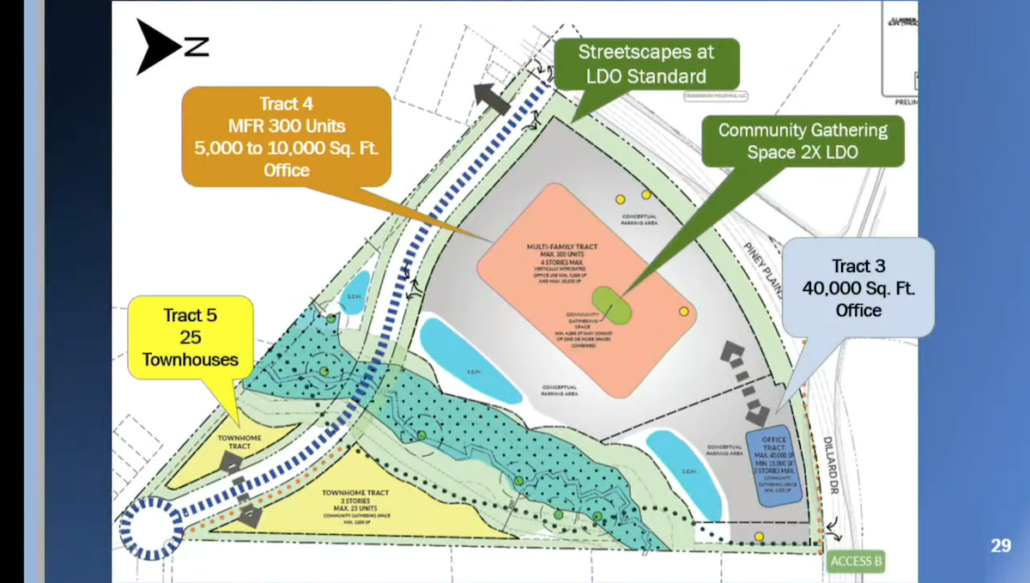 Map rendering shows the re-invented proposal from the developer with a heavier focus on residential space.

Comments from neighbors in the area included concerns of building heights, traffic impacts and street connectivity. Making the case in favor of the rezoning adjustments was Jason Barron, the legal representative of the property owners.

He said, “This site is in a destination center. That is where the Town of Cary, with adoption of the Cary Community Plan, has really focused its highest and most intense uses to be located. So, a high-density residential, mixed-use development of this nature is appropriate within the destination center recommendations.

Four nearby property owners submitted comments to the public hearing. These owners expressed overall opposition, citing issues with the density, location, traffic, topography, buffers, impacts to the environment and one even said that they were concerned that crime and litter would be associated with a rental community. 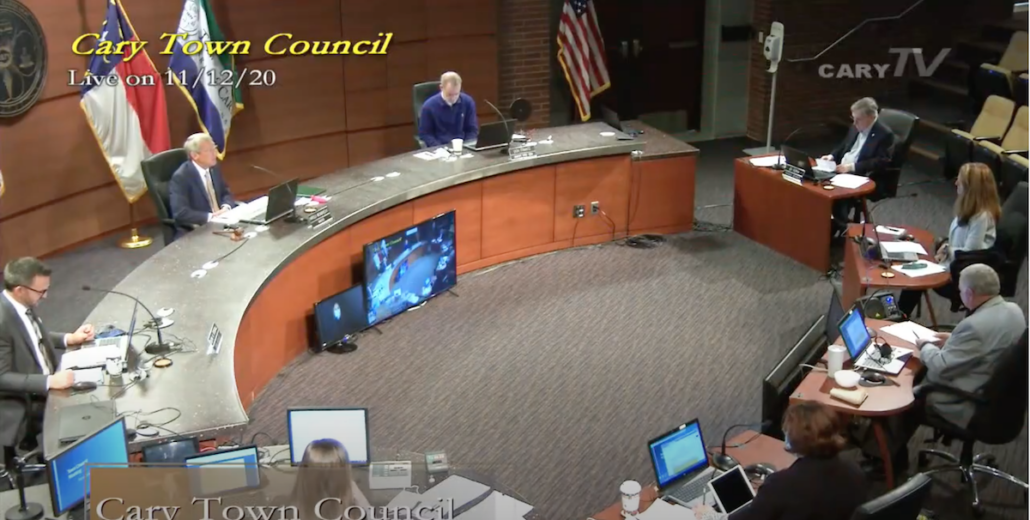 Not a single council member expressed approval for this request.

Starting the conversation was Mayor Pro-Tem Frantz who was not pleased with the potential loss of the streetscape buffer bordering the Tryon Villas neighborhood. He would like to see more from the developer on conditions regarding masonry and architecture.

Councilwoman Robinson wants to see ample parking offered, pointing to the developer’s request to reduce parking by 30% of the LDO standard for the residential mixed family units.

Councilmember Jack Smith frequently walks past this particular site and said a big hurdle for him is seeing enough of an incentive to change the Town’s long-range plans for the area.

“Maybe this was enough 20 years ago in the sense of information and detail, but I just think not only our citizens, but we are demanding more when we look at a rezoning,” said Smith.

Mayor Harold Weinbrecht agreed with their comments and added that he wishes the developer would consider conditions related to the environment.

“When I hear you’re reducing a buffer because a building wouldn’t fit, then you’re building is too big,” said Weinbrecht.

Councilmembers Bush, Yerha and Liu reiterated these concerns, all voicing their opposition.

Of the two and a half hour meeting, a full hour was spent in a closed session with no action following.

Citizens can view this full, recorded meeting on YouTube. All agendas, minutes, videos and calendars are published on the council’s meeting portal.

The next meetings of the Cary Town Council include: