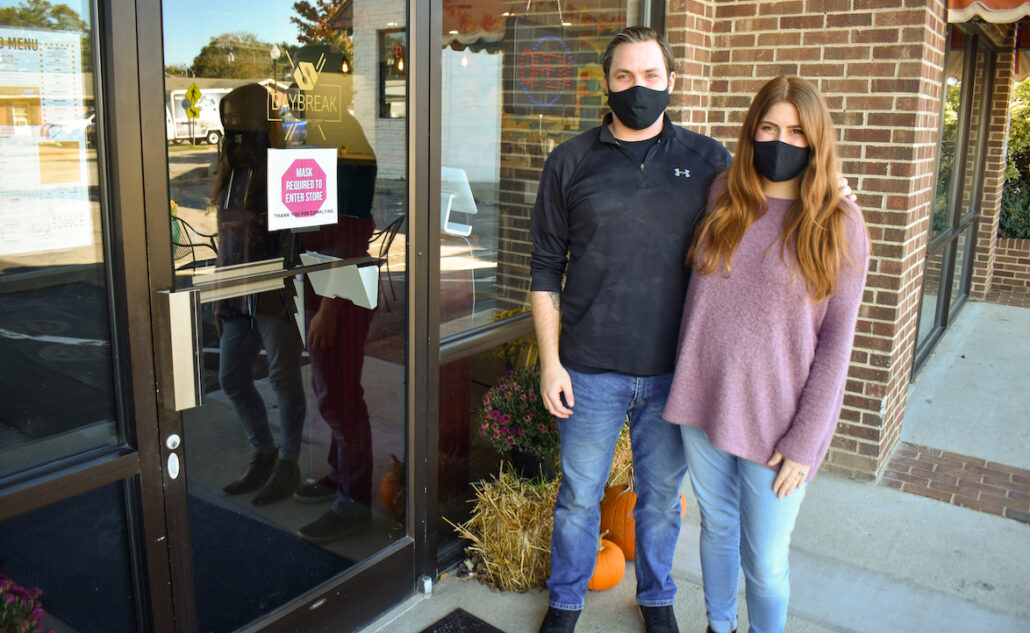 Co-owner Sean Ryan along with his wife and General Manager, Megan Ryan mask up before heading inside, a requirement for all customers.

The faces behind this new spot are familiar in Cary. In fact, the Ryan family has been in town since 1994 and have owned the place right next door, Crosstown Pub and Grill, for nearly 6 years.

Mother and son, Shiela and Sean Ryan own Crosstown and in this new venture, Sheila and Sean share ownership of Daybreak with Sean’s brother, Brendan. Also on this family team is Sean’s wife, Megan, who serves as Daybreak’s general manager and event coordinator. Together, the team has over 40 years of collective restaurant experience.

“We’re really excited to be open now and to be the only sit-down breakfast place in Downtown Cary,” said Megan.

Opening a restaurant in a pandemic was not the ideal environment they had hoped for, but just like everyone else, it was all about adapting.

“We were probably about 97 percent ready to open at the time COVID hit,” said Sean. “It’s important to us to keep everyone safe and we want our staff to be safe, but at the same time, bills don’t stop coming in.”

They decided to wait out the shutdown until the state was reopened and customers were more comfortable before officially opening on September 28, 2020. 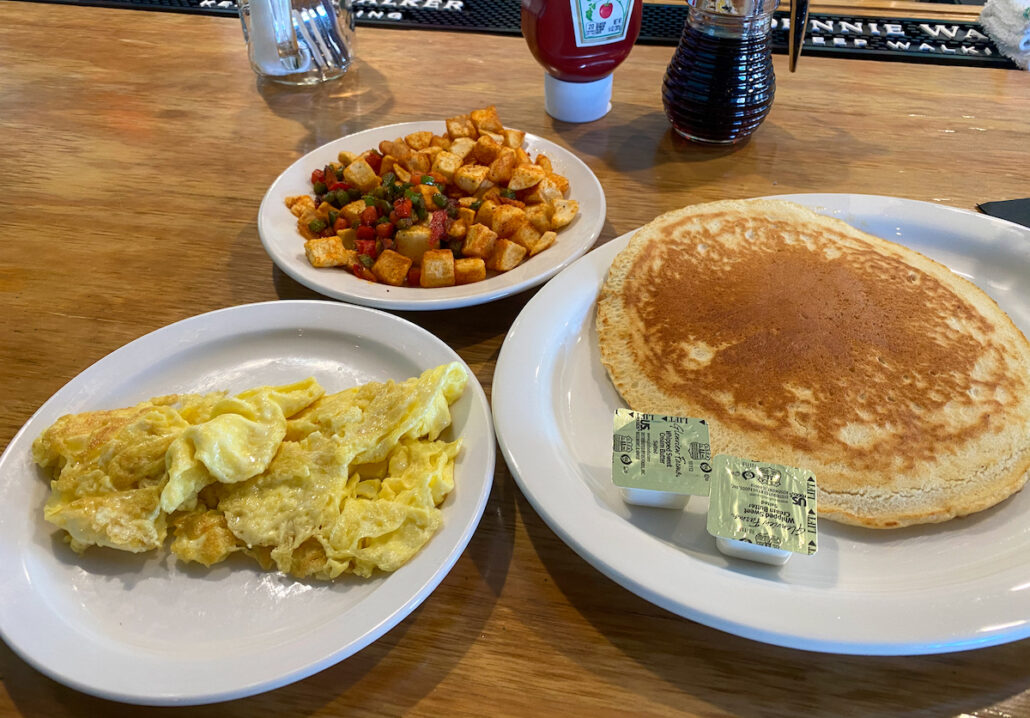 A few of Daybreak’s classic la carté items including a pancake, 2 scrambled eggs and their garlic home fries.

The two major food groups offered at Daybreak are breakfast and tacos. For this, Sean’s reasoning was simple — “Those are my two favorite things!”

Daybreak’s head chef, Juan Duartes, is also head chef at Crosstown Pub and has more than 20 years of culinary experience in the Triangle.

“Our menu’s got a little bit of the classics, but it also has a lot of new twists and tex mex. It’s like all the styles of breakfast coming together,” said Sean.

One of their most popular menu offerings is “The Big Swanson Burrito,” named after the well-known and carnivorous Parks & Recreation character, Ron Swanson. The ginormous burrito is packed with bacon, sausage, ham, confetti pepper, mixed cheese, onion and comes with a side of salsa verde.

Another popular choice is their Pancake Sandwich — their take on the southern classic of chicken and waffles, only more handheld with the fried chicken between two pancakes. Other offerings include their taco flights, omlettes, biscuits and a variety of a la carté items like their garlic home fries that are seasoned and topped with diced red and green bell pepper.

On the coffee side of things, their house coffee is supplied by one of Sean’s good friends who own the Lion Head, a cafe and roastery in Granby, Colorado. 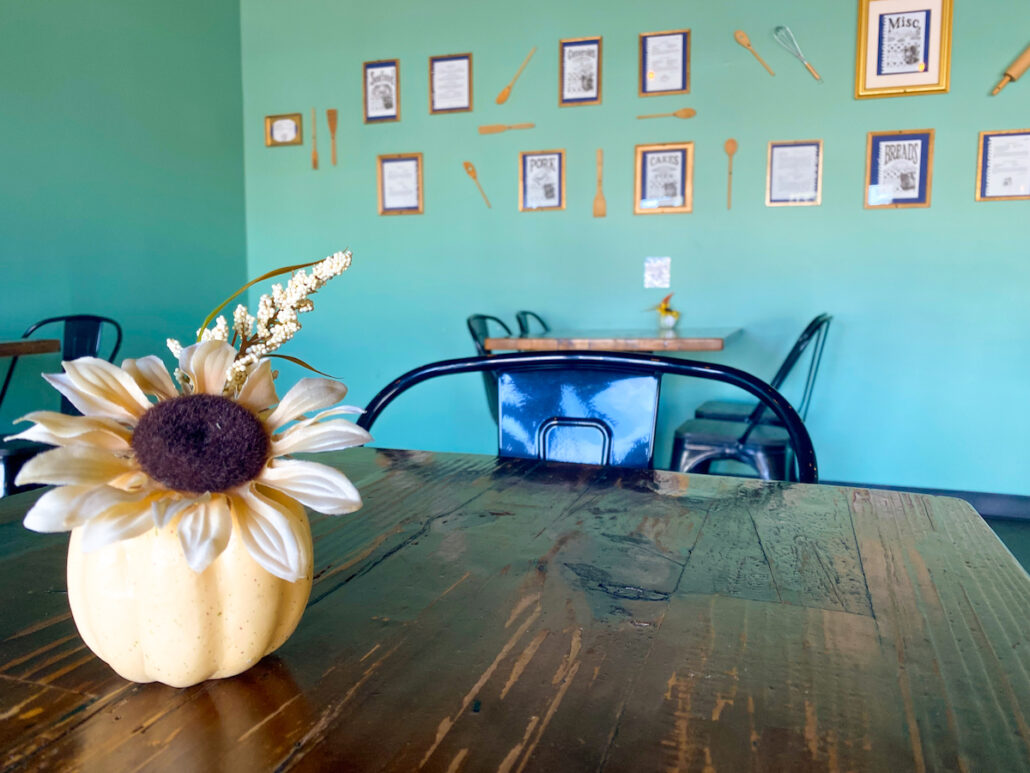 Outside of her role as GM and Event Coordinator, Megan also has a background in interior design and put those skills to work in this space. Using a mix of metals, woodgrains and shades of blue and green, she created the look of Daybreak.

The whole idea was to create a space that diverges from a traditional southern breakfast restaurant. You know, the kind with a few rocking chairs out front, some farm animals painted on the wall and some tacky Grandma’s house-style wallpaper.

“We wanted something more vibrant and modern than that,” said Megan. It was also important to the family to make it so it was a clearly different space from the pub next door.

A key piece to the look of Daybreak is a mural that creates a backdrop for the bar area. It was created by local artist, Craig Gillooly, who put about 4 months and 3 layers of paint into the final artwork. 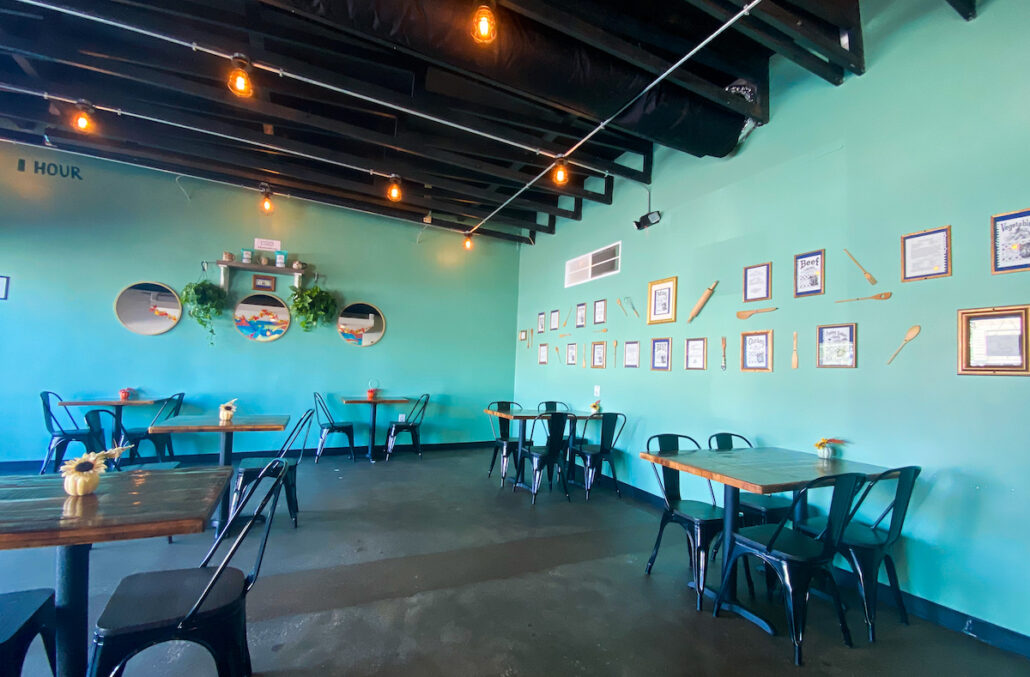 A unique thing about Daybreak is that it wasn’t designed for just serving up coffee and eggs. After the daily breakfast hours, it’s a space available to rent for private events and group rentals.

The space can transform into more of a bar scene at night and has a 12-foot-wide projection screen for use. So far, they’ve hosted several birthday parties and book clubs and look forward to hosting many more events like rehearsal dinners and watch parties.

After the coronavirus concerns tame down, Sean says they’ve got some big plans.

“Once things get back to a steady normal, we are going to be hosting a lot more events. I’ve got a couple of friends that are chefs that are wanting to do pop-up dinners,” said Sean. He also mentioned hosting live music events outside using the parking lot space that they own.

Stop in for a Bite 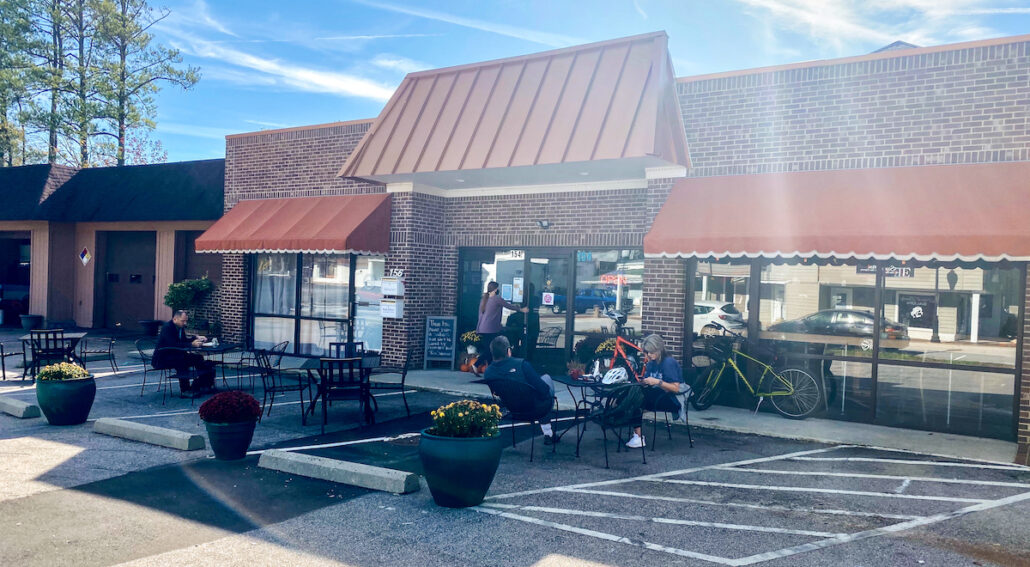 While they do not have their own designated parking, there are nearby lots, the closest being behind Crosstown Pub and there are several parking areas lining Academy Street. Daybreak has outdoor seating, spaced out tables inside, offers takeout and is partnered with Door Dash for deliveries.

Give Back with the Thanksgiving Basket Project