Cary, NC — It was a long 4 1/2 months without playing a game and like Christmas gifts, giving is better than receiving when it comes to hard body checks. Nevertheless, every team in the Playoffs is glad to be back on the ice.

The Canes’ lone warmup game ended in a 3-2 loss to the Washington Capitals, with future Hall of Famer, Alex Ovechkin scoring 2 goals and one assist. Vincent Trocheck and Teuvo Teravainen notched goals for the Canes.

Glad To Be Back On The Ice 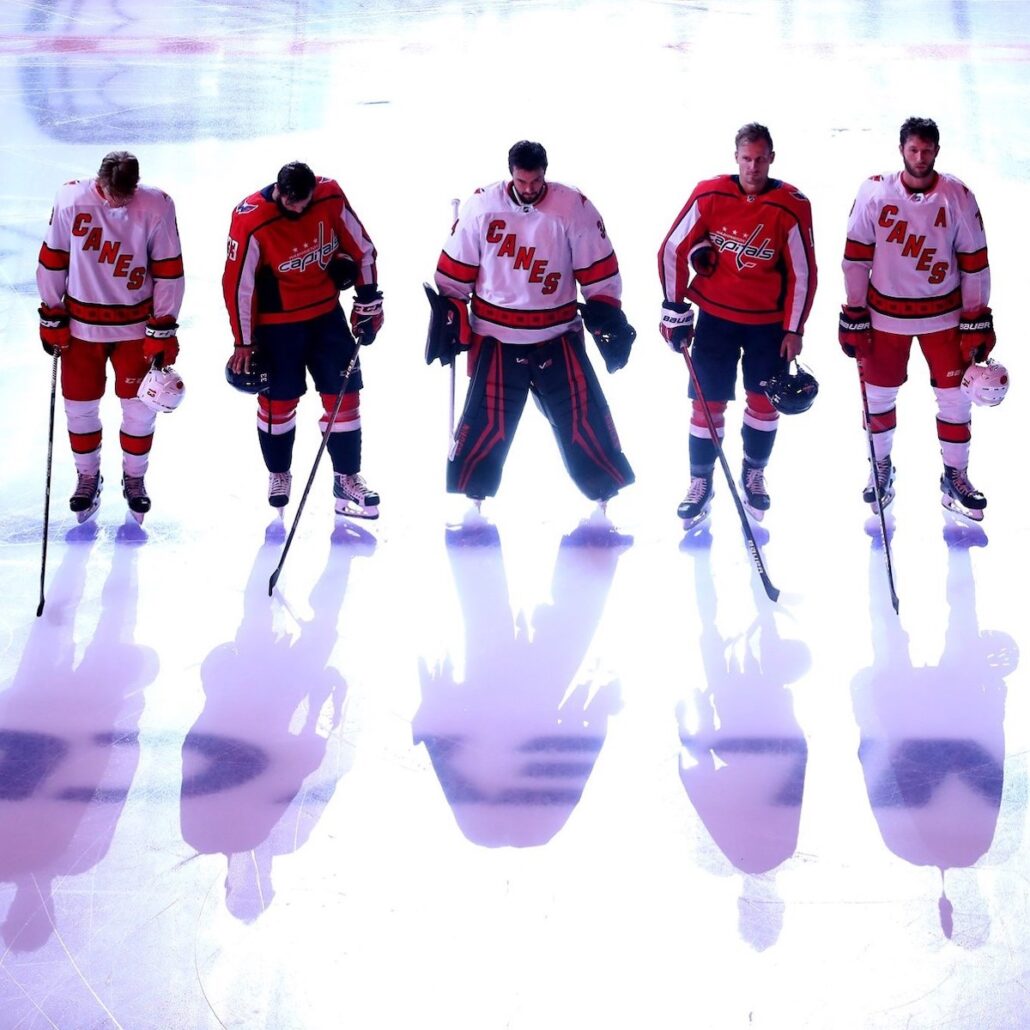 Photo posted by the Hurricanes on social media with the words, “United in our support of the Black Community. #BlackLivesMatter”

You could sense the enthusiasm all players had with their first shifts on the ice as the game was fast from the first drop of the puck. Knowing this game was not like a preseason game in which some players would be vying for a roster spot, in the early part of the game it was noticeable how some checks weren’t at full force or how no one was going to get in front of a shot by Ovi from his wheelhouse risking an injury.

The Caps struck first when TJ Oshie and Ovi had an odd man rush with only Jaccob Slavin back after Jordan Staal turned the puck over at the caps blue line. Oshie made a nice saucer pass over the sliding Savin, setting Ovi up for a blast from 15’ out but somehow the shot went high. The Caps captured the loose puck, went around the perimeter with Ovi backing up to the top of the circle, getting a cross-ice pass and putting a bomb past Petr Mrazek. 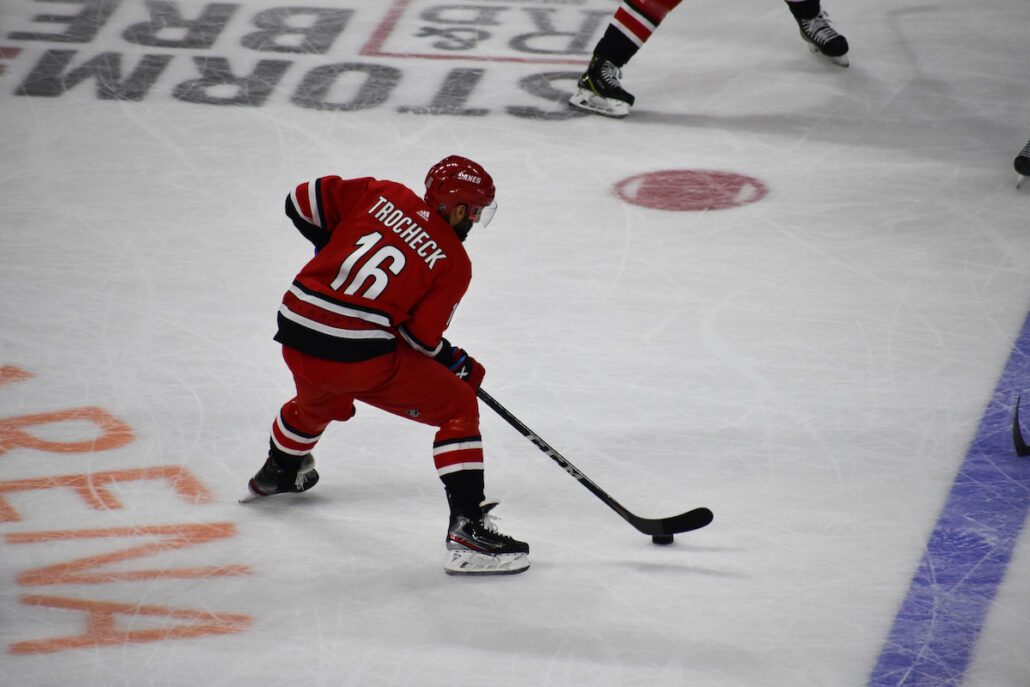 The Panther-turned-Hurricane, Vincent Trocheck, in a regular-season game at PNC in March.

Just 30 seconds later the Canes were deep in the Caps end with a scrum for the puck along the far boards. The puck squirted out with the Caps defense attempting to clear the puck but Jake Gardiner snaring it just inside the blue line. Seeing traffic going to the front of the net, Gardiner simply flung the puck into a mass of bodies with the puck clearing everyone hitting the left post.

With bodies being slammed around, Trocheck saw the puck slip between Vitelli Vanecek’s legs and swatted the puck into the net as he was hit from behind sending the net off the pegs. At first, the call was no goal but reversed after a short replay.

A little over a minute and a half later the Caps scored on a play that was probably the one play that coach Rod Brind’Amour wouldn’t be happy with as the scoring play looked like it was done at half speed, almost like something done at the end of a practice, as all the Canes seemed to stop checking.

After the Canes lost the puck in the Caps end, Tom Wilson carried the puck through the neutral zone with Slavin in pursuit. Slavs caught up with Wilson just as he crossed the Canes blue line but didn’t finish his check. It seems clear that it was likely the instruction of ‘don’t get hurt’ that allowed Wilson to flip a pass over to Ovi on the left wing for an easy score.

The game started to get a little chippy after that as penalties started to become more prevalent. I can’t figure out if Trocheck was a marked man or just unlucky as he drew 3 of the next 4 Caps penalties with the 4th penalty by Wilson against Sebastian Aho, more to send a message than anything, with just seconds remaining.

Teravainen Scores on the Powerplay 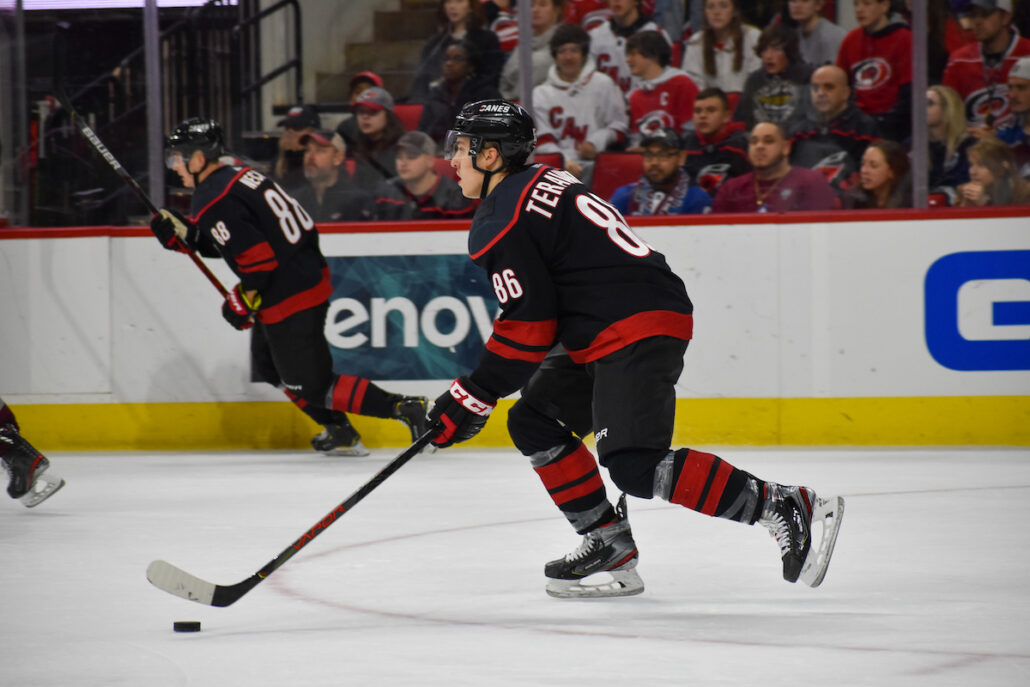 Number 86, Teuvo Teravainen, plays in front of a home-game crowd earlier this season.

The Canes scored early in the third on a 5-on-3 man advantage. Aho had the puck, skated around the entire perimeter, setting up camp on the left side. With the defense cheating towards the puck, Aho threaded a cross ice pass to Turbo who slapped the puck along the ice going five-hole to close the scoring at 3-2.

The chippy play continued the rest of the game with more one on one battles getting personal than for the good of the team. Clearly the Caps wanted to send the Canes a message in case they see each other again in the coming weeks. Both coaches had to be pleased with their teams’ play with no real big surprises.

The Canes 4th line of Morgan Geekie, Jordan Martinook and Warren Foegle played exceptionally well and provided the energy Brind’Amour was looking for. It does look like Dougie Hamilton and Martin Necas will miss the games against the Rangers. With the strict NHL rule of Unfit To Participate, it’s anyone’s guess what is keeping them out of the line up.

Congratulations to Mike Maniscalco on his first call as a play-by-playing announcer and doing a very nice job at it. Well done. First game against the Rangers is Saturday at noon — watch it!

Story by Bob Fennel. Featured image from the Canes’ public Facebook page, others by Ashley Kairis.

See more Canes coverage on CaryCitizen. All the Cary news every day since 2009. Subscribe by email.

Everyday Heroes: Finding Perspective on the Frontline
Scroll to top