Cary, NC — The Cary Town Council gathered for their third virtual meeting of the month on Thursday, May 21, 2020 to vote on a rezoning, an annexation and to hear public comments. 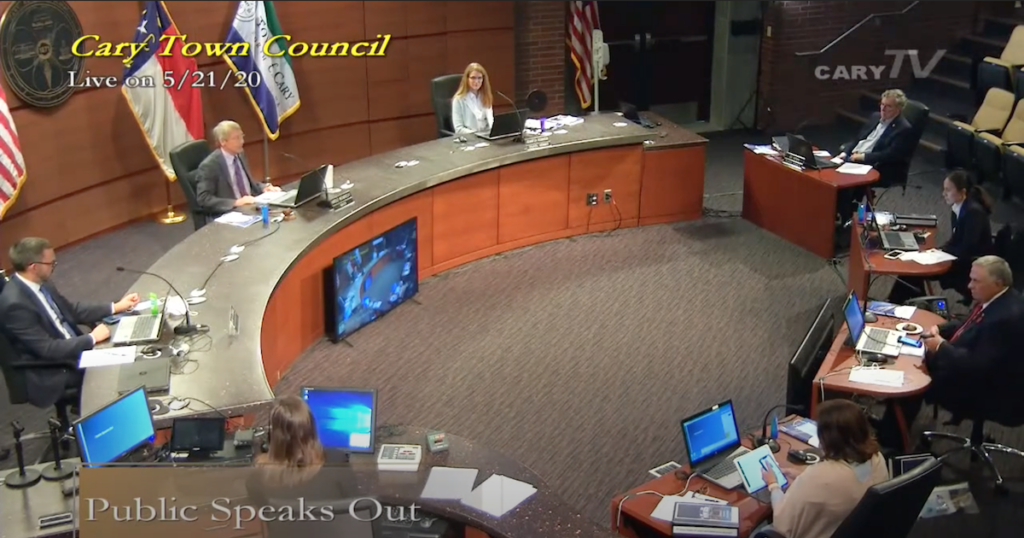 With council meetings being physically closed to the public, the Public Speaks Out portion of the meeting consisted of 3 call-in speakers. All speakers expressed their views on the proposed rock quarry on 105 acres of RDU airport owned land, adjacent to William B. Umstead State Park.

Dr. Jean Spooner, Chair of the Umstead Coalition was the first to speak on the matter siting dust, noise, truck conflicts and environmental impacts as reasons to oppose. According to Spooner, the North Carolina Department of Environmental Quality will soon hold a public hearing on the matter.

“The public is opposed and the Town of Cary should tell the DEQ that the Town is with your citizens to protect your environment and recreational corridors and our Umstead State Park,” said Spooner.

A second and third speaker living in Raleigh also asked the Town to submit comments to request the denial of the mining permit.

“Wake Stone submitted the mining permit application in the middle of a pandemic when the public was preoccupied with concerns for shelter, food, jobs and healthcare,” said the second speaker.

A third speaker who grew up in Cary said, “What Wake Stone and RDUAA see as trash land, the public sees as a major asset.” She encouraged the Town of Cary, as it is a part of Wake County which is one of four entities to own the Odd Fellows property, to speak up against the quarry. 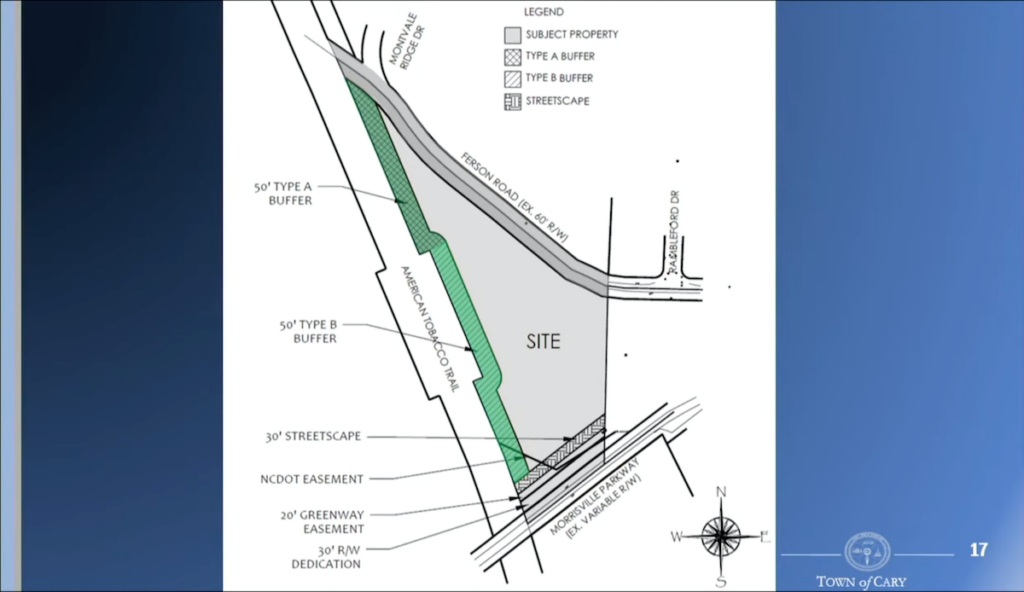 Following the unanimous approval of the consent agenda, the council moved to discuss and approve the annexation and rezoning of approximately 8 acres located at 1033 Ferson Road.

According to Senior Planner, Debra Grannan, the property is located on the north side of Morrisville Parkway and its intersection with the American Tobacco Trail. The property is home to an early 1900s farmhouse and several outbuildings which will not be preserved or relocated due to extensive changes and loss of original materials.

Before the meeting, the property was zoned as Residential 40- Watershed and the request was made to change it to be Residential 20, conditional use and watershed protection overlay district. The same property was also requested to be annexed into Cary’s corporate limits.

The plan for the 8-acre property proposes to:

In January, the Planning and Zoning Board recommended the plan as consistent with the Image Cary Community Plan in a vote of 7-2. Since this vote, the applicant offered a written zoning condition to increase the northern portion of the American Tobacco Trail buffer to Type-A with the remainder of the buffer meeting Type-B parameters. 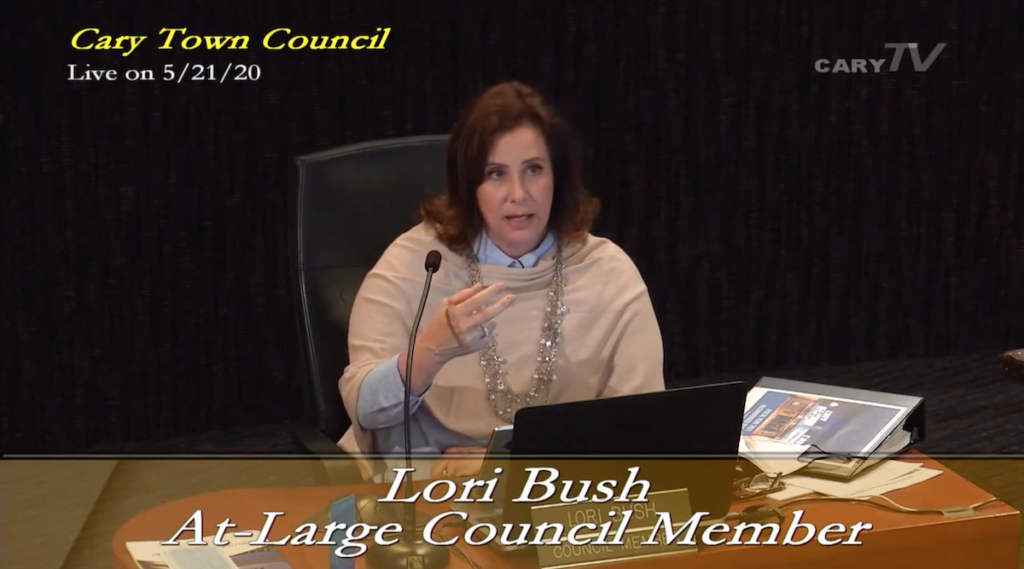 In the discussion, Councilmember Lori Bush asked Grannan what the norm is for buffers along the American Tobacco Trail in residential areas. Grannan responded that it’s truly a mixture of Type A and B buffers.

Regarding the applicant, Bush said she was pleased with their willingness to come forward and agree to do right of ways and buffers. She also said,

“I think one of the most amazing values and gems that we have going through Cary is the American Tobacco Trail and I am on one hand extremely appreciative of what they did and at the same point, I wish that they would find a way to make the entire length of that a Type A buffer.”

“I hope they will consider making additional plannings as time goes on,” said Bush.

Councilmember Ed Yerha spoke to the historic nature of the property, saying, “As for the existing house, I appreciate the attention the staff and the applicant and owner have paid to it.” 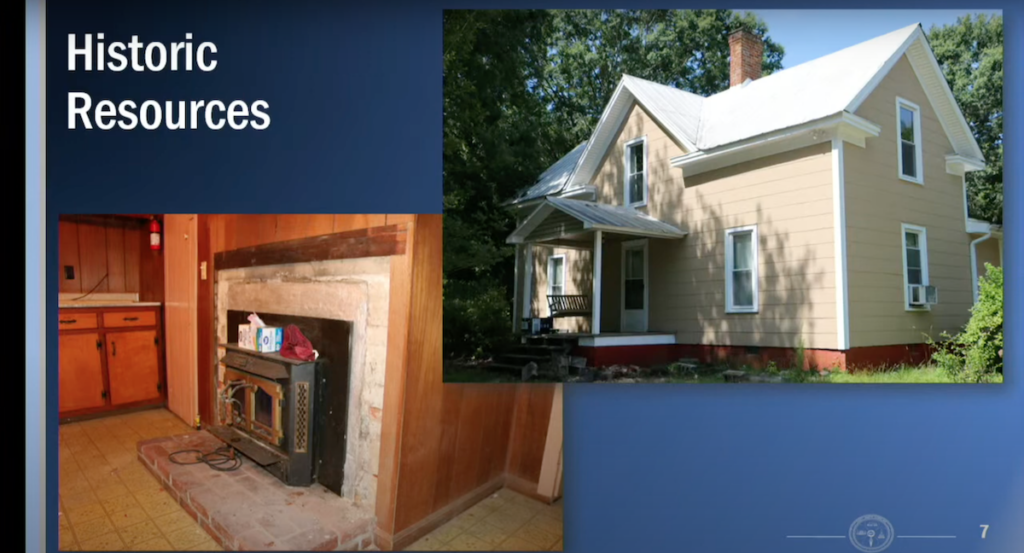 “I concur with the staff’s comments and recommendation, but I doencourage the applicant to do whatever they can to salvage any existing architectural features that are existing from when it was built before raising the entire building. Perhaps they can be repurposed elsewhere,” said Yerha.

Councilmember Jennifer Robinson asked if there was a specific condition in the plan that will require each lot to be at least half an acre.

Grannan responded, “The actual lot size must be 20,000 square feet.”

Following discussion, the council unanimously moved to annex and rezone the property. With no closed session, the meeting adjourned after 30 minutes.

Story by Ashley Kairis. Images screen-captured from the meeting’s broadcast.