The hour-long video broadcast included opening remarks from each councilmember, a few official business items and a question and answer session.

Of 44 questions pre-submitted online, some were answered in the meeting directly and the rest, according to Mayor Harold Weinbrecht, should be published and answered soon on the Town website.

One citizen asked, “How many positive cases are in Cary and how many people have died from COVID-19?” Responding was councilwoman Lori Bush who said,

“The Wake County Division of Public Health recently released the numbers of positive cases at the municipal level for the very first time this week. As of April 24, there were 75 positive COVID-19 cases in Cary.”

Current statistics on the number of positive cases, hospitalizations and deaths can be found at covid19.wakegov.com.

Answering a question on how life in Cary will be different once things get “back to normal,” Councilman Jack Smith said if trends continue to show a flattening of the curve, the Town is “cautiously optimistic that the Governor’s Phase Plan could see restrictions lifted over the next few months.”

Smith also said it is likely that social distancing measures and business modifications will be with us for some time.

“Our hope is that by staying vigilant we can see positive outcomes that will allow the gradual easing of the restrictions we’re currently operating under,” said Smith.

In further discussion, councilwoman Ya Liu said, “We are not currently considering stricter measures for the public.”

Councilman Ed Yerha added that, “Getting together, whether to conduct business or meet socially will have to look different.”

The initial question came from Rick Savage, the Chair of Cary’s Environmental Advisory Board. In response, Smith made a challenge to Savage and the board. Recently Smith says there are a lot of lessons being learned, including the ideas of composting and reducing Cary’s carbon footprint.

“The challenge that I’m going to put on that board is that when things get operational again that we take a strong leadership role in looking at those initiatives that we can make the new normal,” said Smith.

Councilmembers Ya Liu and Lori Bush took part in the meeting remotely.

The policy that outlines the procedural rules of council meetings allows for members to participate electronically but prohibits them from voting. There was discussion and hesitation on whether or not this permanent action to amend the policy might deter future members from showing up in person. According to Town Attorney Christine Simpson, virtual voting requires a State of Emergency to be in place.

Councilwoman Jennifer Robinson said this will allow, should a second wave of the pandemic occur, for the council to be equipped with the ability to transition into virtual meetings.

There is a full list of authorities that State law gives to municipalities, giving power for local action that help prevent, prepare, respond and recover from emergencies. To legally obtain these authorities, municipalities must enact ordinances defining which they have.

Prior to last night’s meeting, Cary’s emergency management ordinance gave some, but not all authorities to the Town. The proposed amendment to the ordinance was to give Mayor Weinbrecht the full powers given by the state.

According to Cary’s Director of Public Safety, Allan Cain, these added authorities include the power to limit or restrict:

The movement of people within public places

This provides the Mayor with the ability to impose curfews, evacuations and controlling access to emergency areas by closing streets.

The operation of businesses & other places where people travel or congregate

Under this authority, the Mayor may restrict the operation of offices, businesses or other places where people travel or congregate. These restrictions do not have to follow the essential business guidance.

He can also restrict the transportation, sale, purchase, use and storage of alcoholic beverages, gasoline, dangerous weapons and dangerous substances. This does not allow for the restriction of lawfully possessed firearms and ammunition.

A fourth authority is given to restrict or prohibit any other activities or conditions, the control of which may be reasonably necessary to maintain order and protect lives or property during the state of emergency

“I was really good until you started talking about restricting alcoholic beverages,” joked Mayor Pro Tem Don Frantz in the discussion.

Councilwoman Robinson asked Cain what type of situation would require such a restriction.

“That would likely occur if you had a civil disturbance or rioting and you might want to restrict or prohibit the use of alcoholic beverages,” said Cain. Following his example, the council unanimously approved the added authorities. 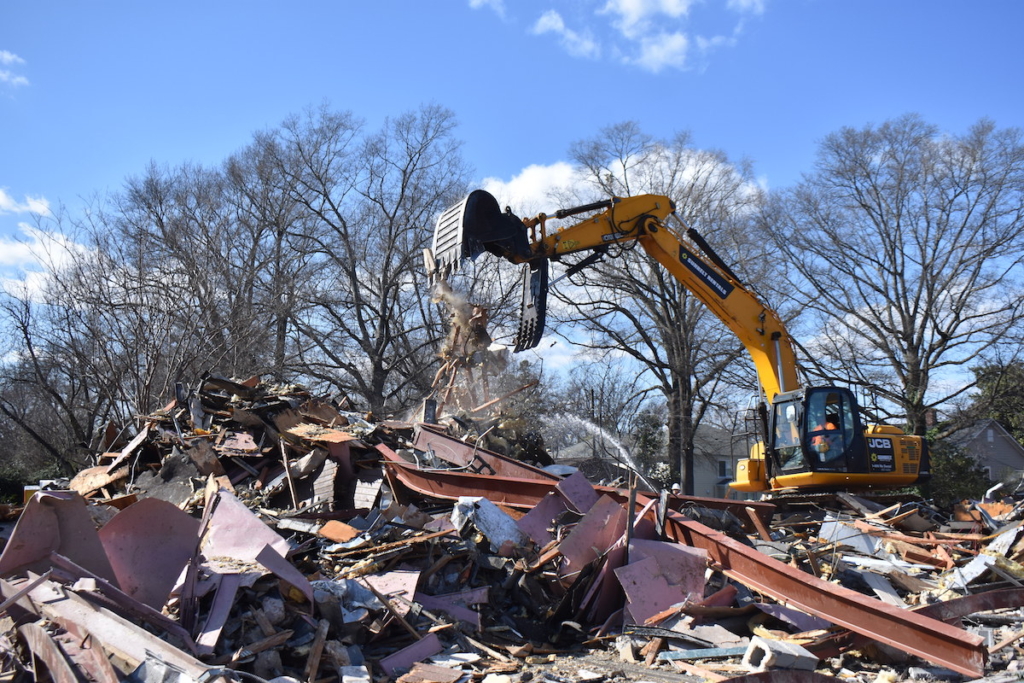 Photo taken on February 29, 2020 of the Old Library demolition.

The Town of Cary asked permission from the state long before the pandemic to try out virtual permit inspections and they received it.

“They have been executing it for quite a while successfully and we were so lucky that they did because now when the pandemic hit, we didn’t miss a beat,” said Councilwoman Jennifer Robinson.

On the topic of development, citizens submitted questions on updates regarding The Fenton, Cary’s Downtown Park and what’s next for the Old Library Site on Academy Street.

According to Robinson, the council had been concerned about the potential of another recession when they first approved the Fenton project. Because of this, a Developer Agreement was put in place to “protect the standards that they were promising.”

“I do have a certain level of confidence that we won’t see a degradation of the quality and standards that were promised to us with the Fenton project,” said Robinson.

On April 28, 2020, the Fenton project received approval for the first phase of construction which includes almost 1 million square feet of office, retail and residential development.

Like the Fenton, Cary’s Downtown Park Project is also moving along and keeping to its previously published schedule. According to Frantz, the project is in the design process now. By late 2020 the design should be completed and the project will go to bid. The project is being funded by the Cary Community Investment Bonds. The timeline also predicts a construction start of winter 2021.

“It is still our intention and goal to complete the park and have it open to the public in 2023, said Frantz. “I think with everything that’s going on, this will be a wonderful thing for our citizens to be able to enjoy when we all come through this.”

The old Cary Library structure was demolished in late February following asbestos removal. The Town of Cary, in an effort to see the site be redeveloped, will issue a Request for Proposal (RFP) to solicit interest from the development community.

According to Frantz, the town’s goal is to select “the best possible development team that shares our community’s vision for the redevelopment of the site.”

Due to the pandemic, Frantz says the council is not yet certain when the RFP process will begin. In the meantime, the building footprint will be a grass lot with a sidewalk path connecting it to the parking lot. The existing 54-space lot will remain a public parking lot until a new development team is selected. 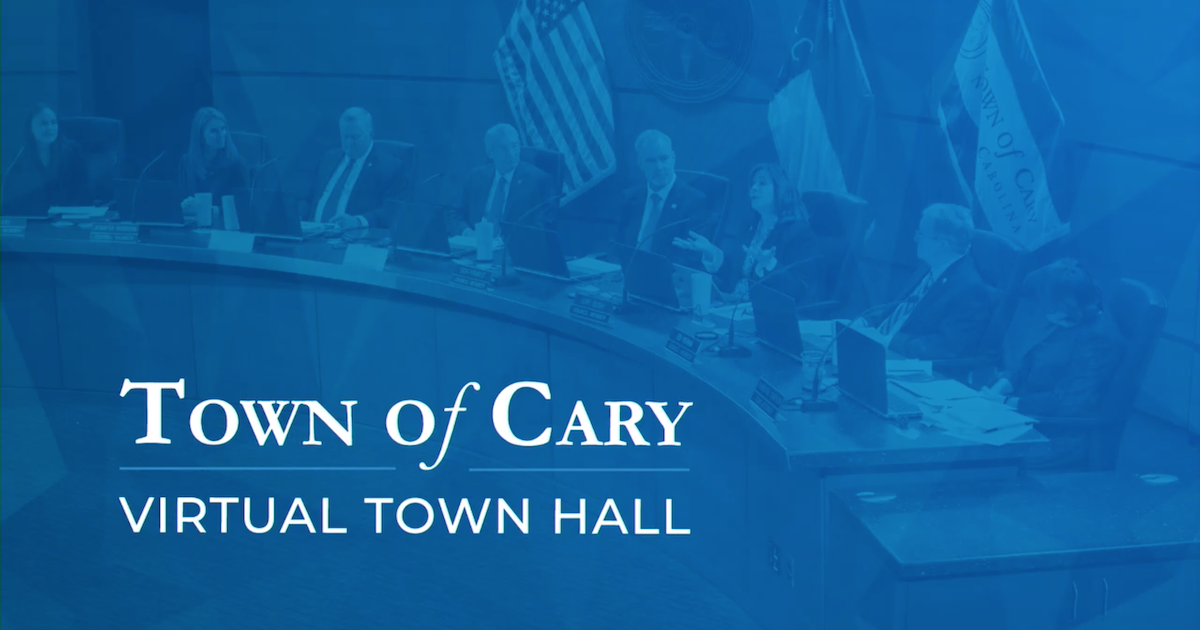 Thursday, May 7, the Town Council will hold another virtual meeting. While the agenda has not been published yet, Mayor Weinbrecht said it will include one public hearing on a Community Development Block Grant. The council will take public comments through the 311 online portal, calling 3-1-1 in or email comments.

Story and photos/screenshots by Ashley Kairis. Read more about Cary development and Town Council decisions in the archives.