Cary, NC — In the Cary Chamber of Commerce virtual Eye-Opener event Wednesday morning economist Dr. Michael Walden of NC State provided his take on the COVID economy, how long it will be affecting us and what to expect in Cary going forward.

Here’s a recap of the thoughts, predictions and data presented by Walden.

“I think one reason why this has been so challenging for people, for households and for businesses is that we had a good economy going into this,” said Walden.

Before the surge of negative economic impacts from the pandemic, numbers showed a record length of economic growth, a growth rate (real GDP) of 2%, rising real wages, low unemployment and low inflation. At the end of 2019 national unemployment had stayed under 4% for more than a year and a half, the lowest it has been since May 1969.

Following the economic turmoil brought on by the spread of the virus, over 10 million Americans applied for unemployment compensation in March. In addition, Walden says 52% of non-food retailers have closed nationally and he, along with many other economists, believes we are “certainly in a recession”.

As Walden explained to the live Zoom audience, a recession simply means the opposite of a normal expansion period. Instead of businesses producing more and household incomes rising, a recession is when an economy heads the opposite direction and everything contracts.

“This recession is different,” said Walden.

To signify a difference between the country’s current state and the recession it weathered from 2007-2009, Walden has dubbed this time period a “mandated recession.”

“This is fundamentally a different recession because it’s a recession that medical people told us we have to go through in order to avoid the consequences that we did not want to see and that is massive deaths and an overwhelmed healthcare system,” said Walden.

Technically, a recession is not officially declared by the federal government, but instead by a private, independent economist think-tank. Walden predicts that this group will not designate what we’re experiencing now as an official recession until sometime next year when all data comes to light.

How Bad Will it Get? 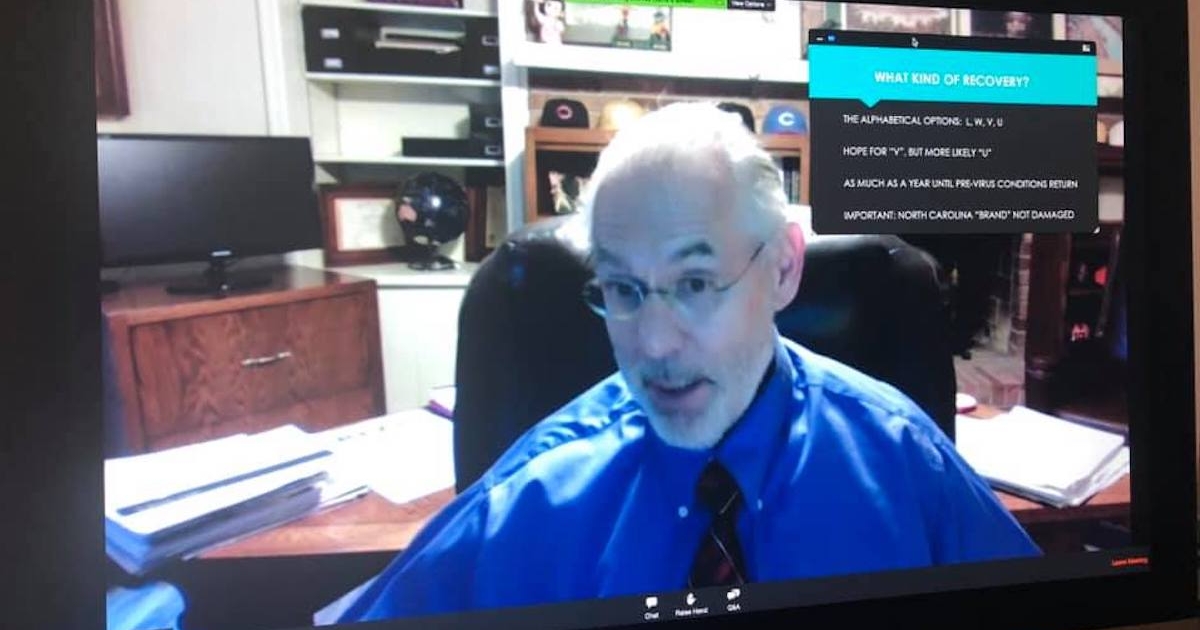 Walden’s comments on the severity of the recession mirrored the phrase, “Things will get worse before they get better.” In a nutshell, he expects the downturn to be deep, but also short.

“We haven’t seen this yet, but the unemployment rate is definitely going to be in the double digits,” said Walden.

Offering a silver lining, he said we are going to see most of the unfortunate impacts during the second fiscal quarter of April, May and June. Following a potential 20-30% dip in the GDP, economists predict the nation will see a slow economic rise while still underperforming in terms of growth rate, income growth and unemployment.

This could last about a year, or perhaps as other economists predict, a year and a half.

While Walden believes the U.S. will set a record for a drop in a single quarter for GDP, there is hope not too far on the horizon for an economic comeback.

The leaders of the country, the state and our leaders here in Cary are beginning to discuss when and how to re-open society. There are countless factors to consider in this process of bringing about a recovery that does more good than harm.

“This is a very, very difficult decision of where is the point at which your public decision-makers are going to open things up and maybe risk some more people dying, but it’s to benefit more economic activity, higher incomes, etc,” said Walden.

Of the various measures that can measure an economy’s recovery, Walden predicts the U.S. will experience a “U recovery”. This type, similar to the shape and curve of the letter, would see a steep fall followed by a gradual period of growth before the economy gets back to one that is expanding again. A second recovery that Walden says would be fantastic, but not necessarily likely is a “V recovery” with a sharp downturn and a quick, evenly sharp comeback.

“I think a lot of businesses, even with the help, will have taken a hit and are not going to be able to get up and gear up immediately, said Walden. He continued to say,

“Maybe we’ll see some economic growth at the end of this year, tops 5% a quarter, then maybe going down to 3-4% a quarter.”

Another silver lining to hold onto is that compared to other states and cities across the country, North Carolina as a brand is likely going to make it through this unscathed.

“In terms of comparative economics for businesses looking to locate somewhere, this is not going to, in my view, tarnish us from what we’ve gone through. I think we’ve handled it, as far as I can tell, very expertly,” said Walden.

“I think we are going to come back strong in terms of our brand.”

Dr. Walden finished his talk with some adjustments we might see in society, namely that we will likely see an uptick in the prefix “tele.” There will likely be a heightened amount of teleworking, telemedicine and tele-education to follow this pandemic.

Walden believes the Triangle in particular would be well-suited for a boom in the continued popularity of teleworking. In addition, things like globalization and supply chains might be revisited to become more pandemic-proof should an event like this happen again.

“If we have a revitalization of particularly some manufacturing and other work in the U.S., I think North Carolina could take advantage of that,” said Walden. “I think one long-run impact of this pandemic may be a motivation for some households, particularly households with children, to reevaluate where they live.

The notion of living in densely populated cities has perhaps been tarnished in the last few weeks. Walden said that because of this, we may see a rise in families living in more rural areas to be at a lower risk.

Offering up a final bottom line, Walden said, “I think we’ll figure it out.”

“We as Americans, North Carolinians, Raleigh-ites and Cary-ites are very, very innovative people. It’s a hallmark of our economy and I think people will figure it out. Businesses will figure it out and I’m confident a year from now, we will be pretty close to being healed and we’ll look back on this as a bad memory, but there will probably be a lot of things that we have learned,” said Walden. 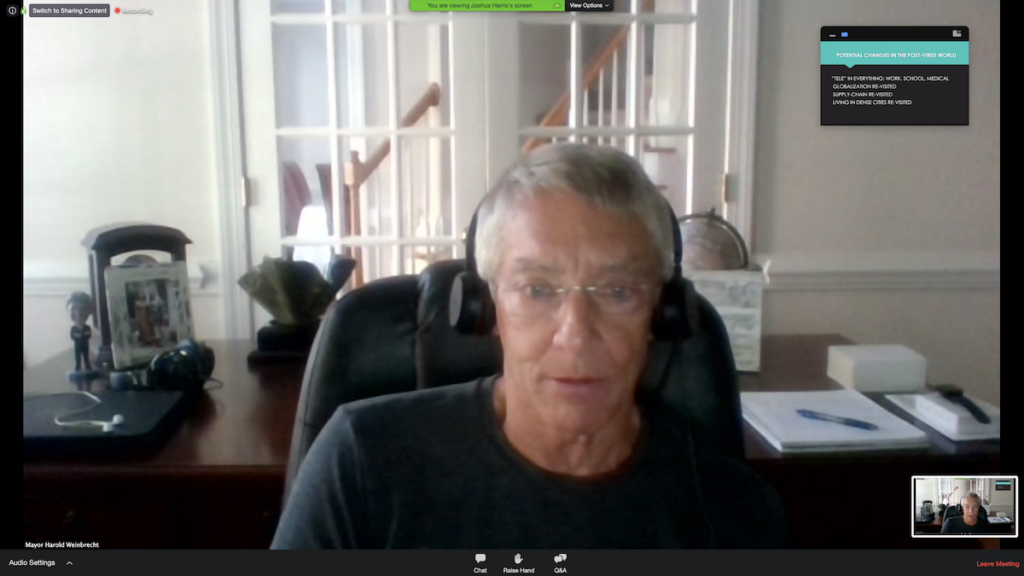 Cary Mayor Harold Weinbrecht also shared some comments during the meeting about the status of the town and government through this trying time.

“I think we’re positioned very well and I think we have the greatest minds and the greatest partnerships with the business community to make things happen and happen in a hurry during this pandemic,” said Weinbrecht.

An important piece to keeping Cary’s economic machine turning has been to keep business inspections and construction going. According to Weinbrecht, this was an important step and one that has not shown to be a harmful one as far as infection concerns go. In closing, he said,

“I see us moving forward pretty well and pretty quickly as we improve.”

Note: See the full video discussion for a Q&A session and more on topics of the federal rescue, previous pandemic comparisons, policies and more.

Thanks to This Week’s Advertisers
Scroll to top