Raleigh, NC — What started as a goal to fulfill a son’s dream to play hockey is now a non-profit sled hockey program that defies the stigma that people with disabilities can’t play hockey.

What is Sled Hockey?

The adaptive sport was first invented in Sweden and follows most of the typical ice hockey rules with the exception of the equipment.

Players sit in specially designed sleds that sit on top of two hockey skate blades. The blades can be positioned farther apart for a higher level of balance, or closer together once a player is more comfortable. There are two sticks for each athlete instead of one and the sticks have metal pics on one end for players to propel themselves and the curved end for passing and shooting on the other.

With protective padding and safety equipment, players can truly compete, reach high speeds and crash as you would expect in any other hockey game.

Roots of the Program

Tyler Jacoby, Founder of the program and son to program directors Kelly and Brian Jacoby, is the young man who started it all. Tyler was born with spina bifida in 2003 and spent much of his first year at Duke, undergoing a series of surgeries.

At the age of 2, Tyler watched in awe during the Carolina Hurricane’s playoff games that led to their 2006 Stanley Cup victory.

“He loved it, watched it and played it on his knees in the living room with little sticks and stuff,” said Kelly Jacoby.

“It was at one of those Canes games when he was 2 that he looked at us and said I want to play hockey like them,” said Kelly.

It wasn’t until Tyler was 6 that Kelly and her husband found a special hockey group for people with developmental disabilities.

“We put him on a metal folding chair with a big stick and he had someone on skates behind him pushing him down the ice. He was happy to be on the ice and had a big grin on his face, but he wanted to be independent and we wanted that for him and figured there had to be a better way,” said Kelly.

In doing more research, she learned about sled hockey, which had made its way into America, but not yet in the Carolinas.

“As far as we know, Tyler was the very first guy to get into a sled in the Carolinas at 6 years old,” said Kelly.

“We got him up in the sled and he was independent. He learned how to propel himself down the ice and he was flying,” said Kelly.

That experience was very freeing for Tyler because he was padded and safe and could go as fast as he wanted. He could hit walls and hit into other players, just as other competitive hockey players do.

Working to build the program for 10 years now, the organization officially became a non-profit in September 2018 with the support of the Carolina Hurricanes and Junior Hurricanes.

“Once we got aligned with those guys, it’s just taken off,” said Kelly. 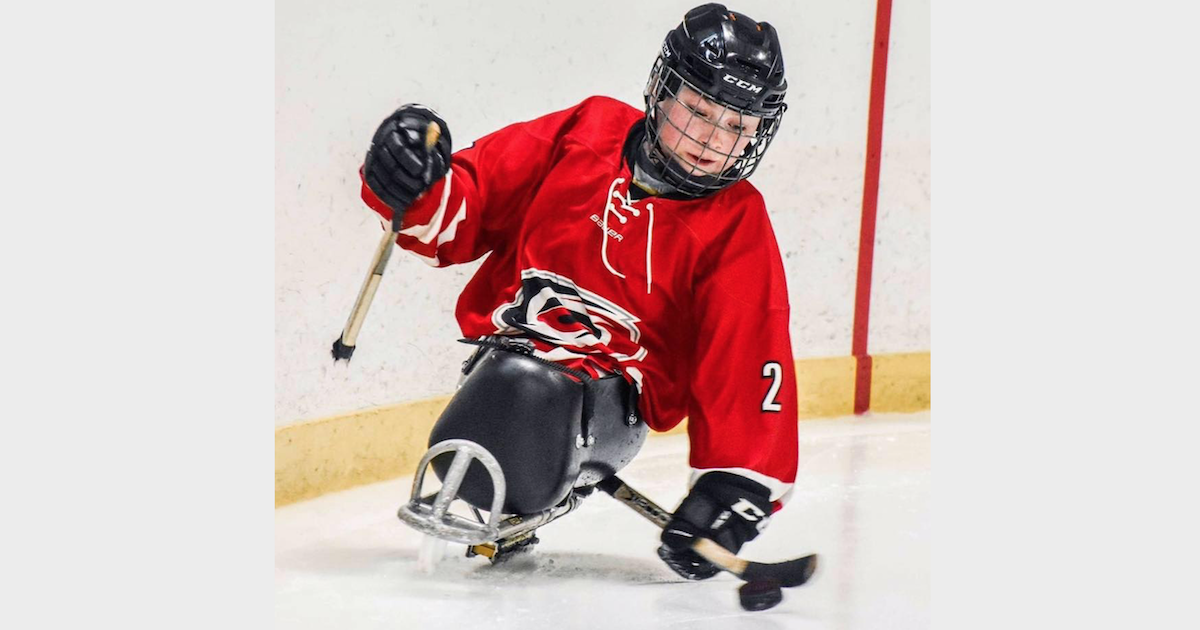 Isaac Dufour, a junior player and double amputee makes his way down the ice with the puck.

Now, at age 16, Tyler competes as one of about 50 total athletes in the program, a significant increase from the 9 players at the program’s start in 2018.

“I enjoy the sport itself but I also love the camaraderie and getting to meet people from all over the country at the tournaments we go to,” said Tyler.

The program is co-ed and open to youth and adult athletes of all abilities at little to no cost. The season runs September – April, culminating with a national tournament.

“Everyone on the team, since they’re already coming in with a medical situation, they can have a lot of debt and bills and so we wanted to offer this in a way that’s not cost-prohibitive,” said Kelly.

When Tyler was first diagnosed before he was even born, the doctors painted a very bleak picture of what his life would look like. They focused on what he wouldn’t be able to do and Kelly says this program strives to do the opposite of that.

“We believe that everybody can do everything and where there’s a will, there’s a way,” said Kelly. “Our basic focus is that hockey is for everybody and we are more alike than different.”

Athletes on the sled hockey youth and adult teams include people with birth defects, wounded warriors, folks with traumatic brain injuries, cancer survivors and others who have a variety of physical differences. The environment of the program has created a space for these individuals where no one questions why they might have one leg or why they’re in a wheelchair. Instead, they’re recognized for their athleticism.

“Our players our out there busting it and it’s really hockey in every way, shape and form,” said Kelly.

The program recently canceled all activities for health concerns surrounding the Covid-19 outbreak, including participation in the end-of-season nation tournament. The program hopes to bring a local tournament to the Triangle, potentially in February or March 2021.

“We’re looking for new players, volunteers and especially money so we can continue to offer this at no cost to our athletes. We don’t have a corporate sponsor yet, but we would love one,” said Kelly.

The sport is quite expensive, costing $1,000 or more per person. Factoring in ice time costing upwards of $400/hour and additional travel expenses for tournaments, the organization puts together fundraising events like their annual Casino Night and searches for sponsors to keep the game free to any who want to join.

For more information on how to get involved as a player, volunteer or donor, email hurricanessledhockey@gmail.com. See the program’s website and Facebook page for updates and schedules.