Cary, NC — The Canes needed to face a good opponent to get back in their rhythm after a disappointing effort in New Jersey against the Devils.

After dominating the first two periods, the Knights picked up their game in the third to tie it at 3-all to send it into overtime.

The Canes had most of the possession in the overtime but still relied on Freddie Andersen for two key saves before Sebastian Aho put away the game-winner off another nifty pass from Andrei Svechnikov with 1:11 remaining.

The Vegas Golden Knights were somewhat the Knight in shiny armor in the Jack Eichel saga that was much of the NHL headlines for 10 months.

This started when he was with Buffalo, got injured and without going into ugly details had a disagreement with the team on treatment for a neck injury. The easy solution for everyone was a new team and Vegas stepped up.

I had a one on one conversation with Eichel and his surgery went very well. He’s skating and taking shots, obviously traveling with the team which in normal times means he’s close to returning to play, however when asked, he gave the standard “I don’t have any idea” answer.

He was super nice, very respectful and when he does return, the Knights, who are an excellent team now, are going to be a serious contender for the Stanley Cup.

Both Coaches Had Their Teams Ready

The game had very tight checking from the drop of the puck. We all know what Rod Brind’Amour expects of his team and Knights’ coach, Peter DeBoer, who has been around a long time, has this team clicking on all cylinders.

The Canes are 2nd in the league on the powerplay at home while the Knights are 7th on the road with both teams aware of how the man advantage could be a game-changing factor. Everyone was so careful on stick control that the game seemed to flow so fast with very few stoppages that when it was well past the first TV timeout, it was a mystery why a whistle was called.

Vegas had the first serious scoring chance on an ill-advised pass in the defensive zone by Steve Lorentz which seemed to have him hold his breath. The Knights intercepted the pass but Tony DeAngelo made an excellent play to knock the puck into the neutral zone. Once Lori got to the bench, you could see him exhale and thank Tony D.

Martin Necas used his speed in the Knights’ end, circling along the boards with Chandler Stephenson finally grabbing Nessy to slow him down, giving the Canes the first powerplay. While it was a good-looking powerplay, by both units, the Knights defense didn’t allow a score although Svech did hit the near post that had the talented forward look up in frustration as that was a golden opportunity.

Back when it was all even on the ice, Brendan Smith made a nice defensive play stealing the puck, taking a hit just after making a nice pass to Ian Cole, who put a bomb on Vegas goalie, Laurent Brossoit, making a kick save.

Youngsters Nessy and Svech each had great chances only to be outdone by saves by Brossoit that again, had both Canes smacking their sticks either on the glass or on their shin pads knowing they each could have had the first goal of the game.

Late in the period, Seth Jarvis got a penalty typically called on a rookie for holding with the Canes defense coming up strong not allowing a shot with the period ending a scoreless tie.

Niederreiter and Trocheck Give Canes 2-0 Lead 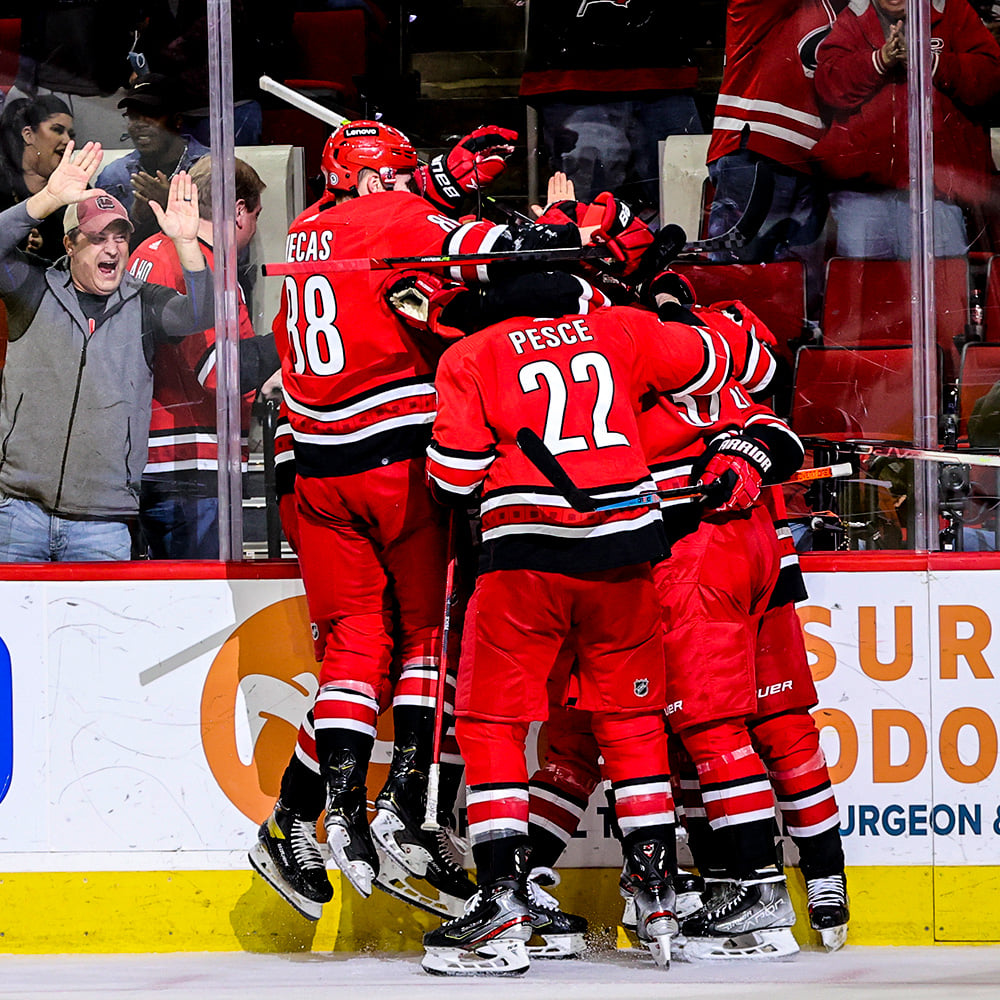 To start the second the Canes easily killed off the last 10 seconds of the Jarvis penalty.

With Fishy and Teuvo Teravainen out on the PK, Turbo intercepted a pass from Brossoit, feeding Fishy forcing The Vegas goalie to make an impressive save. The Canes struck first with forechecking getting the big assist.

The Knights had the puck deep in their end with both Jordan Staal and Nino Niederreiter forcing Mattias Janmark to rim the puck behind the net. Jesper Fast and Nino won a board battle, knocking the puck up to Staal in the near circle.

Staal took a couple of strides with both Quickie and Nino charging the net. Staal’s shot was blocked, Nino and Quickie took swipes at it with the puck trickling just off the blue crease on the far side where Nino got it on the toe of his stick and lifted it in with force for his 12th of the year.

The Knights cleared the puck over their blue line with Derek Stepan making a great steal at the red line. Stepan held the puck long enough for the forwards to make a perfectly executed line change. With the timing of synchronized swimmers, Lori went over the boards onto the bench with Svech going onto the ice.

Stepan made a crisp pass to Svech who wasted no time to enter the zone, knew Vincent Trocheck was covered but was joining on the right, continued with his eyes on the goal, made a sweet double-clutch lead pass that few can execute to Tro who slapped it in to have the Canes go up by 2.

Stepan got called for a weak, but by the letter of the rules, interference penalty with the PK again doing a great job however this time allowed a shot that did challenge Andersen that was actually 3 seconds after the penalty was over. That shot hit the far post, bounced under Andersen’s pads with him losing sight of the puck but Fishy was there to tell him the puck was between his pads on what looked like a “hey, Freddie, it’s over here” moment.

Late in the period, a bad turnover by the Canes allowed the Knights to get on the board.

With the puck innocently going in the Canes end, Smith picked it up going around his own goal with Keegan Kolesar making an aggressive steal in the far corner passing to Nolan Patrick who put a wrister past Andersen to cut the lead in half. Backbreaker of a turnover, especially within the last 2 minutes of the period.

The Canes had the better overall play of the first two periods and better teams dig deeper knowing when they’ve been outplayed. The Knights won the third.

From the start of the third, it was the Knights that had the extra step. This is a team that shut out the Capitals earlier in the week so they know what it takes to win. The Canes had a golden opportunity to put the game away when Alex Pietrangelo clipped Staal with a high stick for a 4 minute penalty.

Midway in the penalty, Turbo got called for fanning. Fanning is defined as a slash that never happened but to even up the teams, call a penalty. I’ve watched the tape 6 times and still can’t see what the refs saw but they’re the ones that matter. After all the penalties were over, Nino had the puck in the Knight’s end and kept his feet moving when tripped up by Dylan Coghlan.

Fishy won the draw with Turbo doing contortions to push the puck up to Tony D. Getting the puck, Tony D walked the puck to the middle, saw traffic, sending a waist height shot that Fishy tipped in for the 3-1 lead.

The Knights hunkered down and put it in high gear with Brett Howden and Nicolas Hague potting goals to tie the game. The Canes had one more man advantage but the Knights’ defense came up big forcing the overtime. 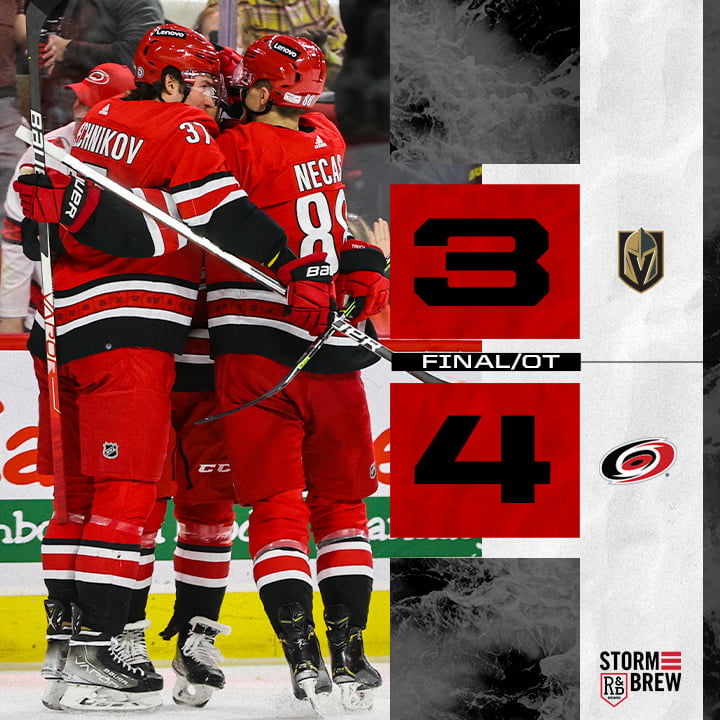 Rod had Staal take the first faceoff in OT and that paid off as he won the draw with Jaccob Slavin taking it deep to allow Staal to go off for Fishy to come on.

Between Fishy, Svech and Slavo, the trio had possession in the Knights’ end with Svech dropping his shoulder powering to the goal getting off the shot that was blocked. Getting the rebound, the Knights went into the Canes end getting off a threatening shot that Andersen came up with a big save.

The team switched lines a few times then it was Fishy and Svech back out there. Svech made an aggressive play along the near boards using his strength, stealing the puck then made another classy pass to Fishy that went right to the goal. After getting stopped on his first two attempts on a five-hole goal, he made it this time with the puck careening in off Brossoit’s right pad for the game-winner.

The next home game is Saturday against the Devils who the Canes have to be up for after the last game between the two teams. Be there!