Cary, NC — The Carolina Hurricanes beat a very good New York Ranger team in a solid 6-3 win to take over first place in the Metro division.

Every player and of course, Coach Rod Brind’Amour could care less about the bragging rights of “first place,” it’s all about those 2 points for the day’s win. If they won the game in overtime, the Rangers would still be in first place because of that mystery point.

Both teams currently have 56 points but based on several factors: head to head and games played, the Canes have played 4 fewer games, on paper, they’re at the top of their division.

This Rangers team is as solid as they get. They have very talented, fast forwards, have a solid defense anchored by the reigning Norris Trophy winner, Adam Fox, who at one time was in the Canes organization and excellent goaltending. Except for the Norris Trophy, that also describes the Canes which has a few end-of-season awards winners of their own.

Not that either team needed anything extra to pump them up about this match but this game was huge with many subplots. The Canes have several former Rangers and with the strange schedule last season, most of them haven’t played against their old team. Last time they met was in the playoffs 2 seasons ago when early in the game, then Canes newcomer/ former Ranger Brady Skjei laid a massive hit on Jesper Fast who is in his second year as a Cane.

Another storyline is Tony DeAngelo who was cut by the Rangers mid-season last year. Tony D signed a team friendly one year contract with the intent of proving to himself and everyone that what happened, right, wrong or perceived in the past is in the past, and that he belongs in the NHL. He “picked” a team that is all about player character, team reputation, high personal standards and community. Tony D has met and surpassed not only the team’s but his own commitment. 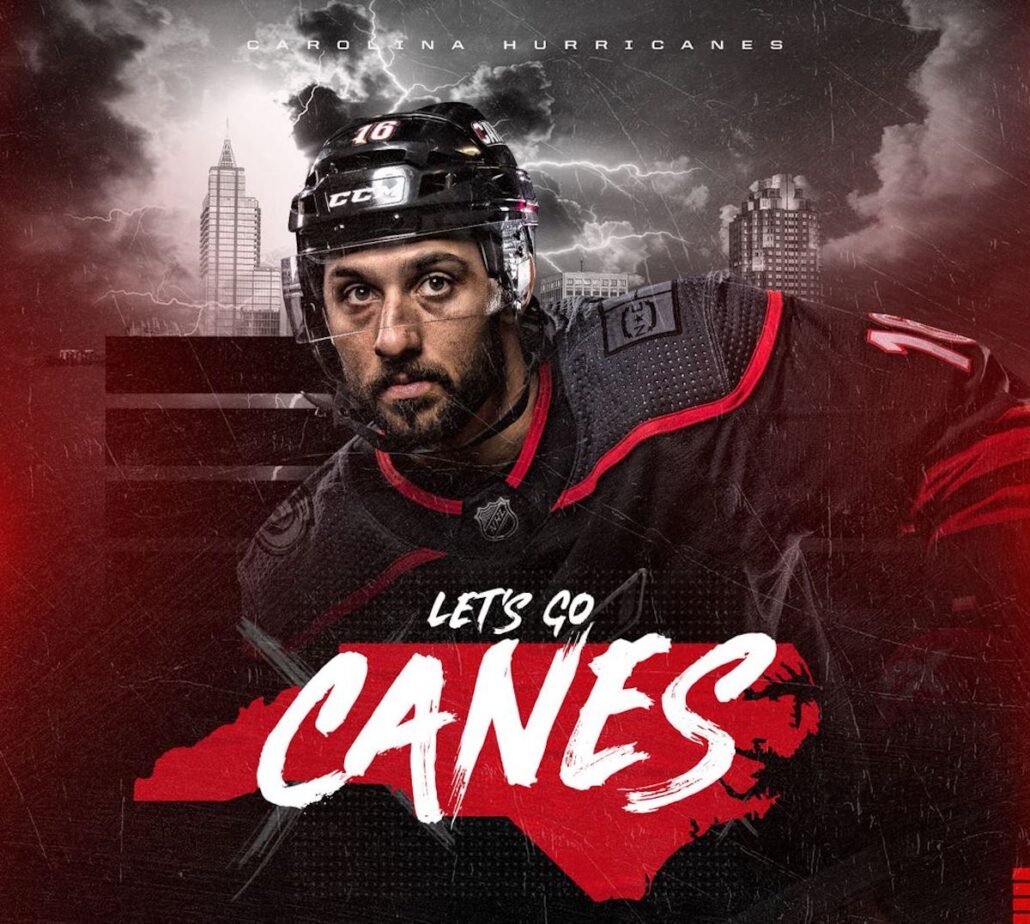 Having the last line change allowed Brind’Amour to make the matches he wanted. To start the game he had the Staal-Fast-Lorentz line go against one of the top lines in the league of Chris Kreider- Mika Zibanejad-Kaapo Kakko.

The Canes had the early advantage as everyone seemed to have that extra step, extra stretch of the stick and extra oomph on the body check. Andrei Svechnikov, who has made great strides in his defensive game, made an impressive sweep check in the neutral zone to break up a potential 3-on-2 Ranger advantage.

The Rangers forwards seemed to attack the blue line like the Rockettes, all in sync, all on a straight line, all perfectly timed. Jesper Fast almost had the games’ first tally when he attempted a wrap-around that Ranger goalie Alexandar Georgiev slid over to lay his right skate tight on the post.

Jacob Trouba took exception to some deception by Svech and got caught slashing to give the Canes the first powerplay of the game. Sebastian Aho won a faceoff with the Canes keeping the puck around the perimeter.

Vincent Trocheck dangled the puck below the goal line and Fishy was covered so Tro passed up to Teuvo Teravainen along the near boards. Likewise, Turbo saw Fishy covered and opted to pass up to Tony D who skated along the blue line, didn’t have a shooting lane, and wisely passed over to Svech in the far circle.

Svech made a quick pass back to Tony D who saw Fishy and Tro in the slot and threw the puck thigh high which Tro tipped for a redirection into the back of the net for the all important first goal. Seeing Tony D’s celebration after that goal was priceless.

A few minutes later Svech got a pass in the neutral zone from Jaccob Slavin. Just as Svech was crossing the blue line right in front of the Ranger bench, Ryan Lindgren lined up Svech for a solid check but it was Lindgren that went flying backwards much to the astonishment or delight of a few teammates.

Late in the period, Turbo cleared the puck from the Canes’ end off the glass into the neutral zone. Fishy got to the puck just ahead of Adam Fox, and kept his feet moving while Fox reached and grabbed Fishy’s arm for an obvious interference penalty that the refs let play on.

With Fox beat, Fishy had one defender back with Seth Jarvis joining on the right. Fishy waited long enough, slid a perfect pass that Jarvis redirected in for a pretty goal and a nice 2-0 lead.

Fast’s Bomb, Aho On His Back, Niederreiter Finishing Play

The biggest surprise going into the second was the Rangers only had 4 shots on net. Give credit to the relentless forechecking by the Canes and solid body crunching by the defense.

The Rangers are a good team and everyone knew the low shot count couldn’t last. Early in the second, after a nice play by Lori to keep the puck in the arrangers zone, former Ranger Tony D had a great setup for former Ranger Quickie who was filling in for Slavin on the left point. With Slavo and Staal, that’s almost 450 pounds of Canes in front of the goal, Fishy went for broke and fired a slap shot that cleared everyone, including Georgiev to make it 3-0.

A few minutes later Turbo had his head down when Barclay Goodrow hit Turbo in the shoulder knocking him to the ice like a toy doll. Jesperi Kotkaniemi took exception to the hit, going right after Goodrow drawing an extra 2 minutes for instigating.

It took all of 5 seconds from Zibanejad to pop in the powerplay goal.

Fishy won a faceoff in the Rangers’ end 8 minutes later with Turbo quickly windmilling a shot along the ice. Georgiev made the pad save with Fishy going to a knee to get the rebound. He spanked it to the goal and hit the goalie’s skate with Georgiev going down reaching for the puck.

His center of gravity going with his big rear end fell backwards with Fishy on his back. Then, in the words of Jim Valvano, Fishie never gave up, took 2 swipes and hit the puck in for another 3 goal lead.

In the last minute of play, the Canes had a back breaker if a goal on one of the prettiest assists you’ll see.

Ian Cole took a shot that was blocked in front. Nino Niederreiter fetched the puck just before the near boards, quickly sending it behind the net to Svech.

Svech saw a defenseman on each post, almost seemed to smile, and had his stick going back and forth over the puck. He went for a one time scoop up to fake a “Svech Lacrosse” goal that had Fox bite and make a play towards Svech who sent a sweet lob pass to Nino who quickly went 5 hole for the 5-1 lead. 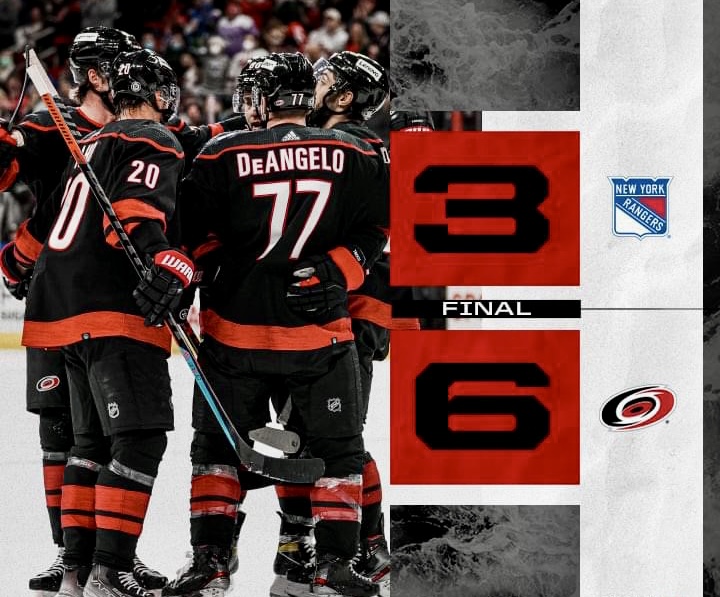 Everyone in the PNC Arena knew the Rangers were going to go all in for the third. Two nights earlier the Rangers were down 3-1 against Toronto only to come back with 5 unanswered goals to beat the Leafs.

With Jarvis in the box on a hooking call, the Rangers’ Kreider scored their second powerplay goal, his 26th of the season. A little over a minute later former Cane Greg McKegg tallied his first of the year prompting Brind’Amour to call a well timed time-out to slow the momentum.

Good chance Brind’Amour told the Canes to just play their game and don’t get off their normal discipline. That was perfect timing as the Canes put that previous 4 minutes in the rear view mirror and went back to Canes hockey.

There’s no quit in the Rangers and they continued to attack. Just when the clock watching began and thinking coach Gerard Gallant, who is an excellent coach, was going to pull the goalie for an extra skater—Alexis LaFreniere got caught slashing Svech. This all but killed any Ranger chance for a miracle comeback.

On the powerplay, Tro had the puck below the goal line and passed to Fishy at the near half boards. Fishy passed to Tony D at the left point then walked the puck to the far side while Staal and Tro set up camp in front of the goal.

Seeing that mass of humanity in front, Tony D sent a slapper that cleared everyone for the final goal and another over the top celebration. With a goal and 3 points, Tony D was the game’s #1 star and was very appreciative to the fans after the game.

The Canes play the Devils in NJ in just 22 hours with Dougie Hamilton who is out with a broken jaw. Next home game is Tuesday against a good Vegas Knights team. Be there!