Cary, NC — Renowned economist and distinguished professor, Michael Walden made a presentation to members of the Cary Chamber of Commerce on Wednesday morning.

His remarks included data points to show what the U.S. and regional economic landscapes have looked like in the last year as well as a few economic forecasting projections, which he offered up with a healthy grain of salt. The big questions he said will be interesting to see the answers to in 2022 were: 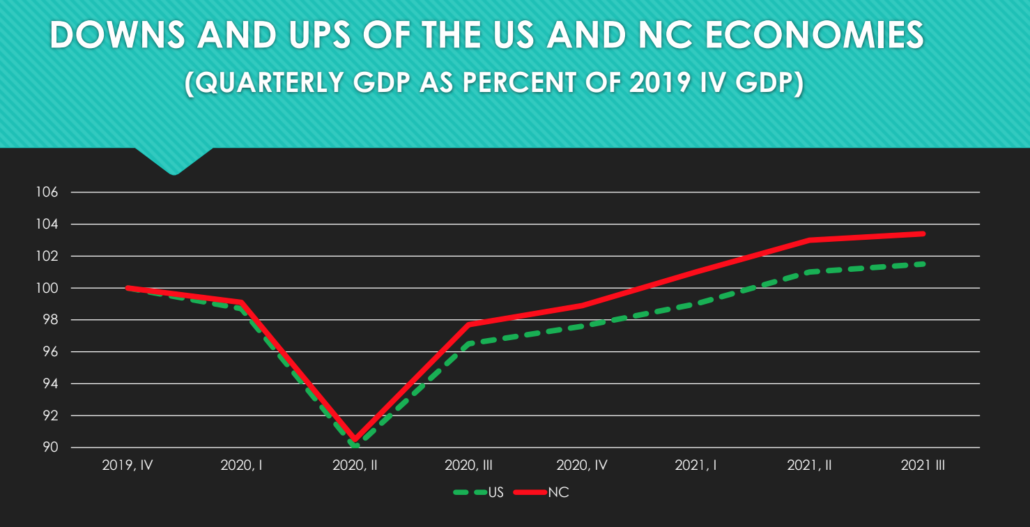 First looking back to 2020 and 2021 for context, Walden shared the ups and downs of the national and state economies by quarter, according to the GDP above. On this, he said the crash seen in the second quarter of 2020 was “short-lived” and both economies saw a flattening of the curve with notable, yet inconsistent growth rates.

Employment in November 2021 in the Raleigh-Cary metro area has come back up to 100% as compared to the employment numbers reported just before the pandemic in February 2020. Comparatively, the state in that same time period reached 98% and metros of Asheville and Greensboro/High Point registered at 95%.

That said, there is still a labor shortage being felt by many companies. On this, Walden offered a few reasons why fewer people have been looking for work in this time of the pandemic. These included uncertainty of school scheduling, reduced availability of childcare, continued concerns of the virus and a “massive spike” in retirements. Additionally, on a more political nerve, Walden says some point to federal spending, including an influx of cash from the stimulus checks, expanded Obamacare, child payments, expanded food stamps and more jobless benefits.

Another trend being noticed is a re-allocation of workers to different sectors. As the pandemic put many people at home or furloughed, many used the time and financial support to improve their skills and seek different jobs.

In response to the labor supply issue, Walden said many have adopted one or more of 3 tactics — attract employees with higher pay and/or better benefits, take measures to improve productivity, or substitute technology and automation for workers.

Looking forward, Walden said the shortage should improve as supplemental unemployment payments end, but there will likely still be ongoing issues across several industries from the up-skilling of the workforce seen during the pandemic. 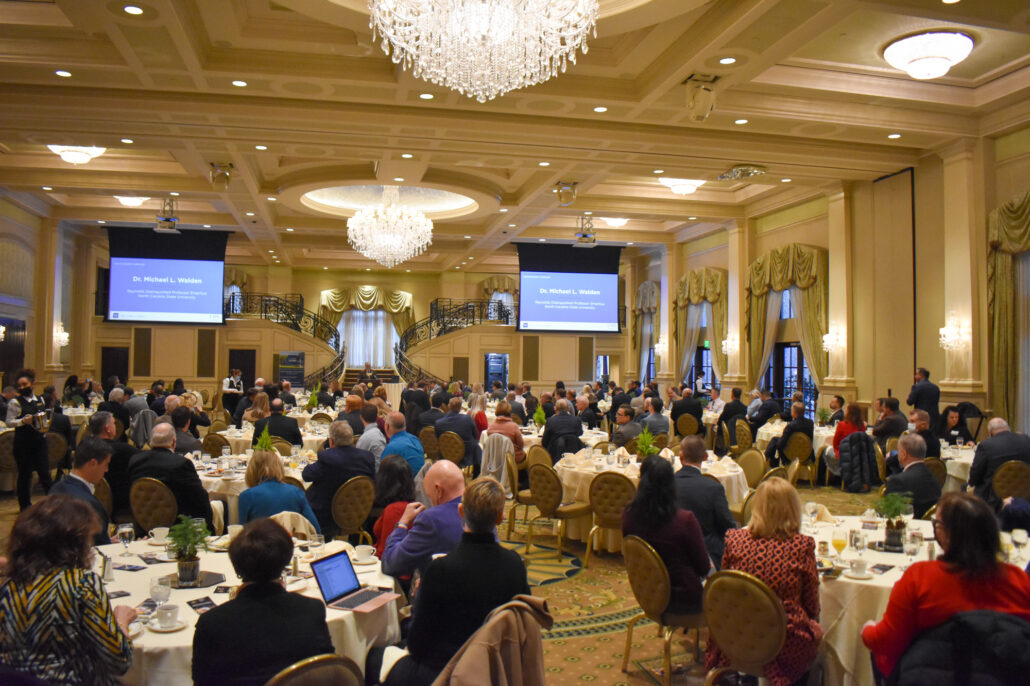 In addition to being in North Carolina, which to many in business is seen as a “safe state,” the Raleigh-Cary area has particularly fared well with a strong job market. In 2021, our local market was ranked 17th on a lineup of 368 metro areas based on building permits in the works. From this, the Raleigh-Cary area saw a 75% increase in new commercial space over 2020.

Overall, Walden added, the Triangle area is rising in its profile as one of the top growth centers in the country.

“One big issue we’re now coming to grips with is inflation,” Walden said.

Since the mid-80s, inflation has been a non-issue, keeping to about 1-2% in the 21st century. All of a sudden though, Walden says inflation rates are being seen at levels like 6 or 7%. This is consistent with rates of the late 1970s, early 1980s. With this issue, two major views have emerged called “demand pull” and “supply push.”

Alternatively, those who take the “demand pull” view believe that higher inflation is thanks to all the money that has been created and pushed into the economy. Those who believe this is the reason don’t see the inflation rate being so temporary, and expect it to be a concern through 2022. 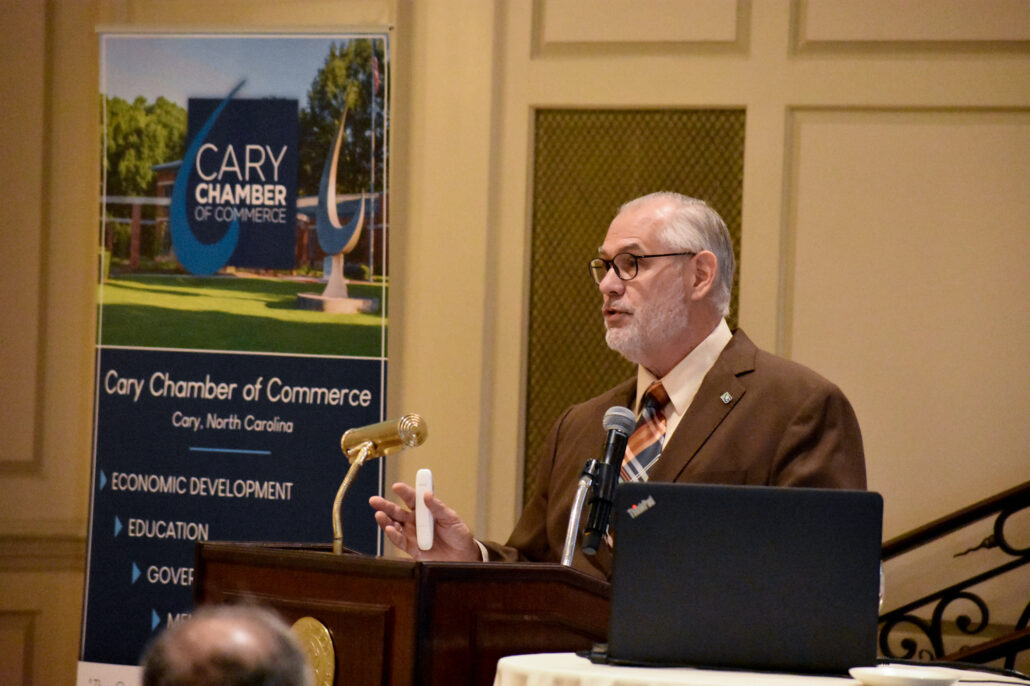 The crowd of Chamber members tensed up a bit when Walden presented the total price tag so far of federal assistance that has been granted during the pandemic — $5.5 trillion. This, he said, represents 25% of the U.S. GDP. Of these funds, North Carolina has taken in $80 million.

The big question he gets asked on these numbers is “was there too much aid provided?” The answer is not so easy.

Walden explained from his perspective, “We were in unknown territory in early 2020. We hadn’t had a medical catastrophe like this in 100 years.” He added, “We wanted to have an economy left after this was over.”

With many uncertainties and a lack of hindsight at the time, Walden believes it made sense for our public leaders at the federal level to continue to help people and institutions and “err on the side of too much help.”

The federal reserve also financed a hefty portion of the government borrowing to keep interest rates low. In 2019, the rate was just under 2.5% and now sits close to 0%. Where did the federal reserve get all this money? Well, in part, they created it by printing it. From this, the money supply in the U.S. went up 85% since the beginning of the pandemic.

“I’m not saying that was wrong. I think at the time it had to be done, but why it’s important is we’re beginning to see the effects of that,” said Walden.  Now he says, the reserve’s biggest challenge will be to navigate through decreasing the money growth while increasing interest rates — all the while not hindering economic growth.

Unwinding the move of creating this influx of money, he says, does have an impact on the economic outlook of 2022.

Moving into his economic forecast, Walden shared projected graphs for how he sees North Carolina’s GDP and unemployment rates evolving. Interestingly, a new factor to these charts is that he has two predictions — one in which we don’t see further variants of COVID-19 and one where we do. 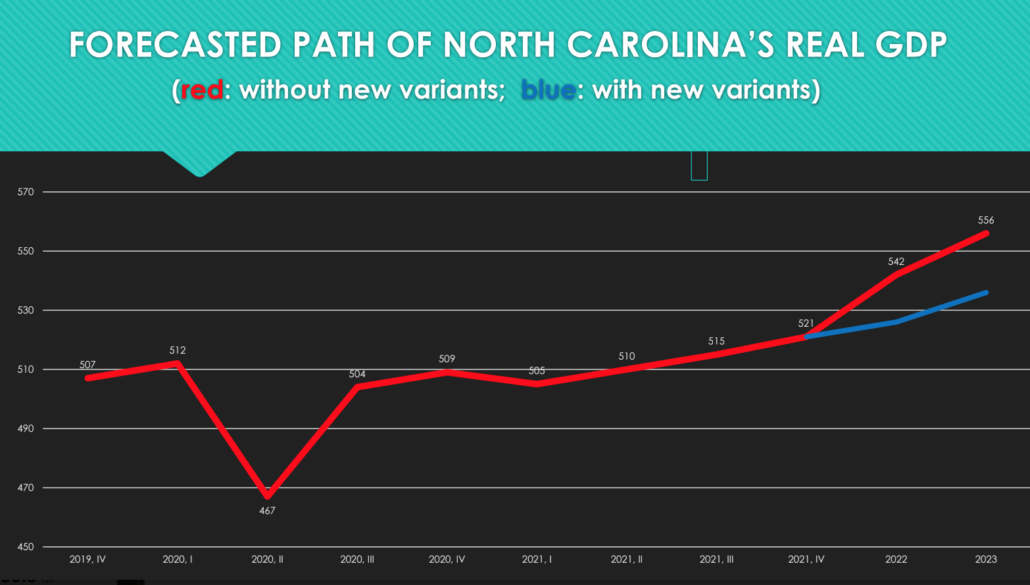 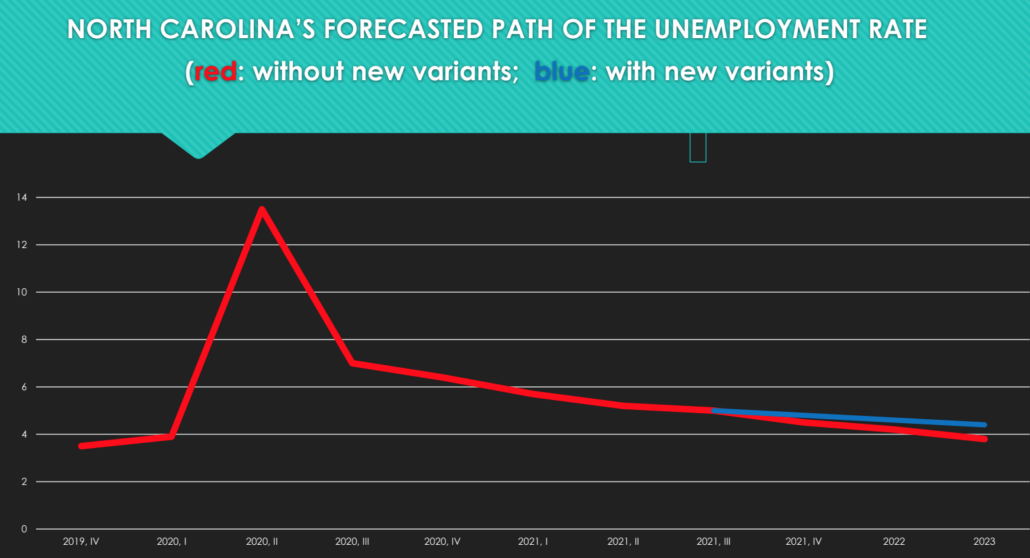 The great news taken away from both is that Walden believes, with or without new variants, unemployment rates will continue in a downward trend and the GDP will continue in an upward trend. Variants and the continuation of the pandemic though could have impacts on just how much those needles will tip.

Teleworking was also a topic of

Before ending his remarks in a question and answer session, Walden gave a few working environment predictions as well. In these areas, he expects:

Cary History: Education in the Time of Segregation