Cary, NC — Better than 10% of the players in the NHL are in Covid protocol with 5 teams having all games this week postponed so the Canes were lucky to have the game against the surging LA Kings be played.

The Canes still have 6 out on the protocol with another 2 nursing injuries. The games scheduled for Sunday against the Predators and Tuesday against Boston have already been postponed. I wouldn’t be surprised if the game in Ottawa on Thursday is also postponed as any player or staff testing positive would be spending Christmas alone in a hotel room as crossing borders is a major issue this past month.

NHL Commissioner Gary Bettman called for enhanced testing and measures for all teams to help ensure everyone’s health and allow teams to play. Canes President and GM, Don Waddell has had all season, possibly the most aggressive approach in calling for testing twice a day, every day.

So, the NHL went from testing every third day to once daily. As a reference, the NFL ceased all testing. (The new NFL slogan could be a spin-off of the Canes’ answer to Don Cherry, to become “A Bunch Of Idiots”) The once-daily testing in the NHL comes along with strict rules both on the road and at home. Interaction with fans, including giving autographs, is not allowed at this time.

Kotkaniemi, Fast Get Canes Off to Quick 2-0 Lead 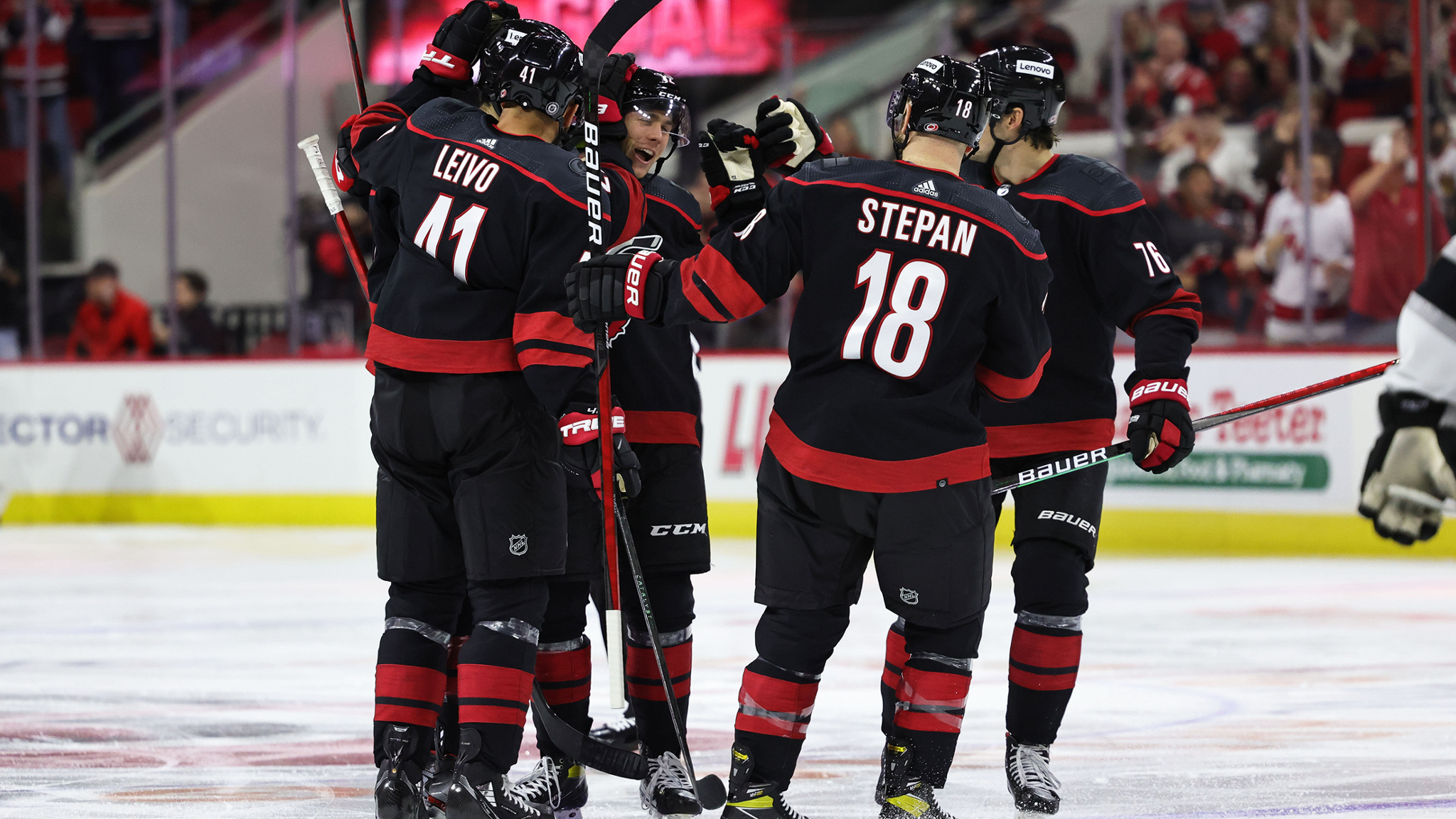 Caniacs aren’t the wine and cheese type fans that arrive late and leave early. Along with being dedicated fans, in the past few games, the Canes have started out hot. Jesperi Kotkaniemi (KK) won the initial faceoff and, as the expression goes, they were off and running.

Teuvo Teravainen made a nice play along the far boards to stop a clear by the Kings then take control of the puck. Turbo saw Brady Skjei making a break off the right point, centered a crisp pass and with a clear lane, Skjei settled the puck sending a hard wrister.

Kings netminder, Jonathan Quick, made a chest save with the puck flopping to the ice. Quick was quick to drop to his knees in a semi-prone position to cover the puck but lesson #2 by every coach from peewees to pros pushes is ‘play to the whistle’ which is what KK did, saw the puck loose, quickly scooped it up and wristed it in with 2 Kings’ D-men standing by with only 37 seconds into the game.  It was KK’s 7th of the season and the 100th career point for Skjei.

Kings’ Coach Todd McLellan challenged the goal as 4 touches of the puck before the goal, indicating that Jesper Fast hit the puck with a high stick. Replay confirmed the play was legal resulting in a delay of game penalty. The Canes made the best of the situation when only 59 seconds later the Canes got everyone a Bojangles Boberry biscuit.

Call up Andrew Poturalski won the draw to the left of Quick with Nino Niederreiter sneaking behind the defense to gain possession. Nino passed back to Poturalski along the far half boards, wasting no time to pass up to Jaccob Slavin on the right point. Slavo saw traffic in front of the crease sending a medium-fired wrister that Quickie with that keen hand/eye coordination ticked in flight to change the trajectory to have the puck go in over the goalie’s right shoulder for the 2-0 lead with only 1:36 gone in the game.

The Kings have been on a roll of late, knocking off the Florida Panthers 4-1 a couple of days earlier and started pressing hard in the Canes’ end. Just about the 6-minute mark, it looked like the Kings were going to cut the lead in half when Andrian Kempe, who scored 2 goals against the Canes in L.A., had a shot destined for the back of the net in the lower right corner but Frederik Andersen made an unbelievable save.

Normally there is a noticeable difference in the play of each line but all 4 forward lines on both teams were all playing great and aggressive. Typically the fourth lines are known as the energy line, fast attacking play, relentless forechecking, banging bodies, a shot here or there and allowing the more skilled lines a needed breather.

While both fourth lines did that, they also provided some fun hockey to watch. The bad news of the period was at the 9:26 mark, Martin Necas was on the receiving end of an illegal hit that had him lay on the ice for about a minute. While he went to the bench with the hope to continue to play, the concussion spotter called for him to visit the darkroom for testing and didn’t return to the game. 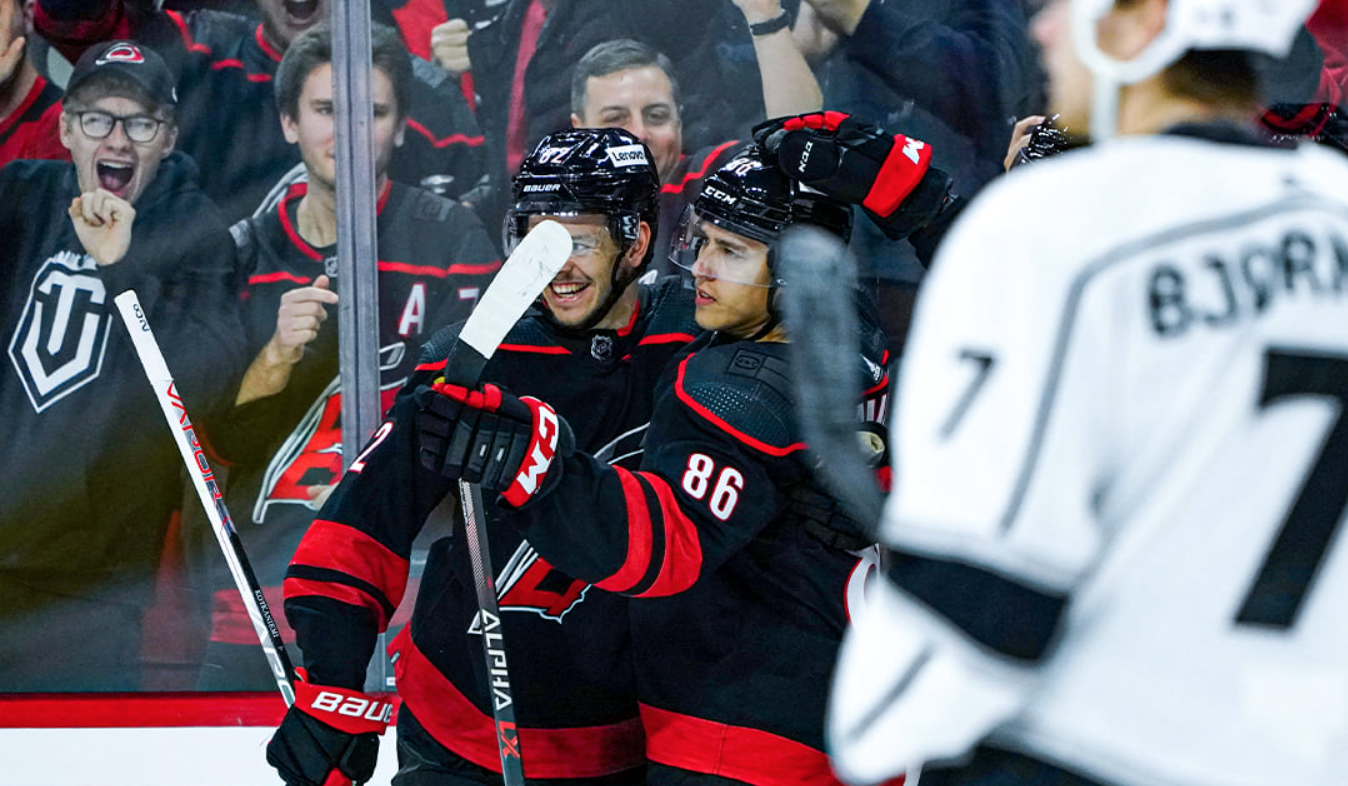 With Nessy out, Coach Rod Brind’Amour was forced to shuffle lines again but with his ‘system’ and more like his expectation, switching players in and out of lines is pretty much seamless.

Again, early in the period, the Canes had the puck deep in the Kings zone. Brett Pesce intercepted an attempted clear just inside Kings’ blue line, sending the puck deep. Josh Leivo got the puck behind the net, made a quick 180 degree turn to fool his defender then sent the puck back up to Pesh at the point.

Pesh saw Jack Drury go to the dirty area slinging a half-speed shot/ feed that initially looked like Drury redirected but after a review confirmed the puck went in untouched for Pesce’s second of the year and solid 3-0 lead. Despite 2 penalties, Skjei was having a great game, taking those on what would be ‘good’ penalties, both holding calls that did stop high scoring chances.

The Canes penalty kill has been perfect lately and was 3-for-3 by the games’ end. Slightly under midway in the second, the Canes powerplay struck again. Vincent Trocheck won the faceoff drawing the puck back to Tony DeAngelo. Tony D settled the puck up high, Tro went to the right accepting the pass, saw nothing in front sending a backhander back to Tony D.

Tony D made a quick pass to KK in the high slot but had his back to the net for no shot, wisely passing back Tony D who quickly passed over to Turbo on the far side. With both big man Stefan Noesen and KK creating traffic, Turbo sighted an opening lasering a silent wrister into the back of the net that completely fool Kings’ goalie Quick for a 4-0 lead.

The Kings got on the board 6 minutes later on an impressive individual play by Blake Lizotte. Lizotte stole the puck just over the Canes blue line in the neutral zone, faked going right, went left put the puck on his forehand wristing a hard shot to the far upper side. He may be the only Kings player to like playing the Canes as he scored his only other goal this year against the Canes in L.A. 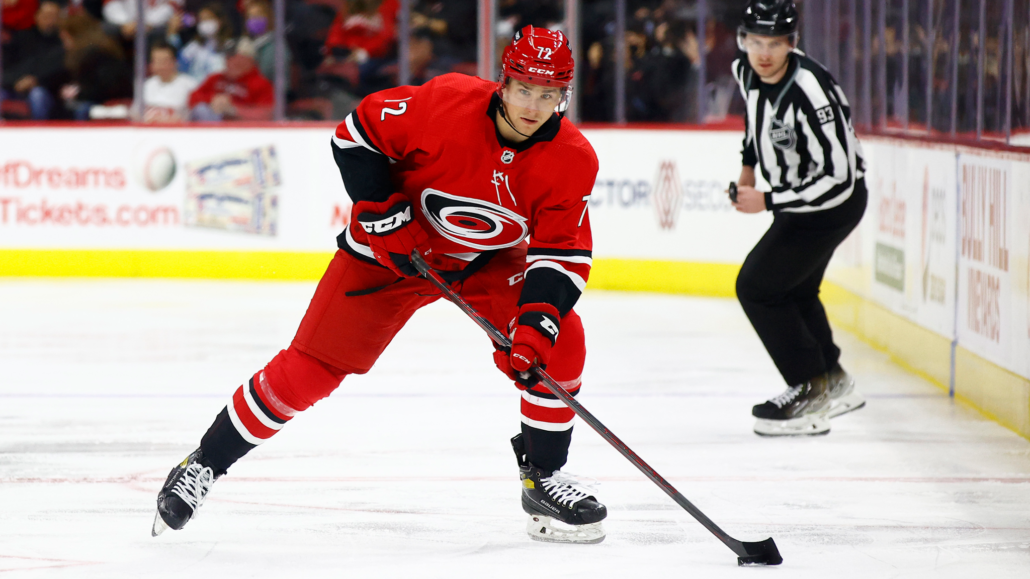 Brind’Amour had the team attacking in the third but cautiously attacking. With the intent of getting the puck deep, all 3 forwards were going deep with clinical forechecking, pouncing on anything that moved.

Late in the game, the Caniacs got a treat and possibly a vision of the future when Drury got his second goal in as many NHL games he’s played. Brendan Smith held the puck in his zone waiting for the lines to change. Once in place, Smith sent a hard pass up to Derek Stepan just north of the Kings blue line.

Stepan banked a pass over to the left-wing knowing Drury was racing down the left side who had a stride on his defender, scooped up the puck, head faked a bit then put a great-looking goal top shelf for the final score of 5-1. In between periods, had the opportunity to have a brief conversation with called-up and now injured Jalen Chatfield.

Like Jordan Martinook, Chatfield has not begun skating yet as the purported ankle injury must be worse than initially thought. I do like the tenacity of his play and has been a nice replacement for the Canes. 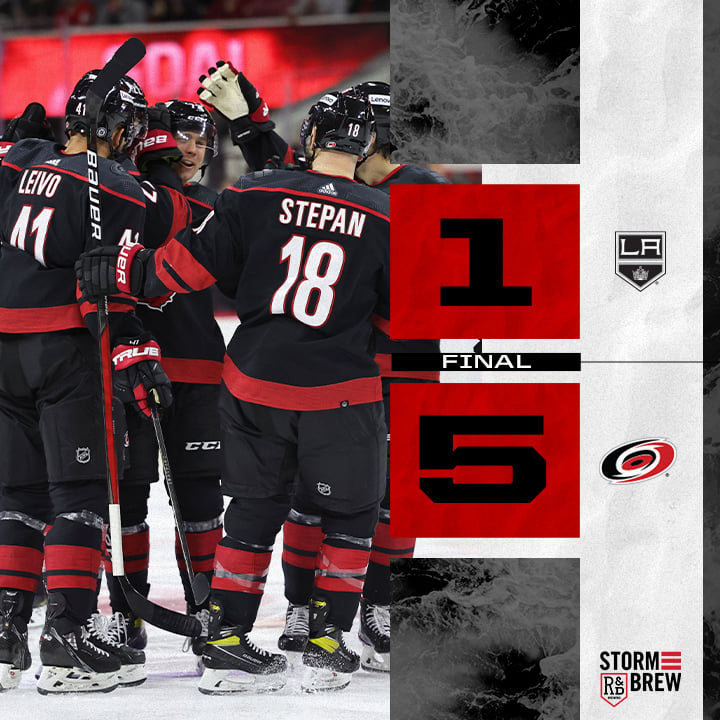 The next home game, at this time, is Tuesday, December 27 against the Panthers. Be there!