Cary, NC — The Carolina Hurricanes, while still dominating the play in most of them, lost 4 of their last 5 games.

Saturday was a well-deserved victory as the Canes found the back of the net with consistency in another solid team performance, finishing in a 6-2 win over the Buffalo Sabres.

The Canes had a few surprises when the lineup was announced — Antti Raanta was making his second consecutive start, Andrei Svechnikov was out of the lineup, and due to healthy bodies available, Coach Rod Brind’Amour went with 11 forwards and 7 defensemen.

On the bright side, Ethan Bear came off Covid protocol and was back in the lineup after spending time in, as he called it, “luxury prison,” locked up in a hotel in California after testing positive while on the western U.S. road trip.

Buffalo started the season with a surprisingly strong start considering the drama of the Jack Eichel situation. Kudos to former Canes Stanley Cup Alternate Captain, Kevyn Adams now Buffalo G, on how he handled everything.

The Sabres headed into the game on a bad skid, losing 7 of their last 8 games and should have been as hungry as the Canes for turning things around. The Sabres’ top line of Jeff Skinner, Tage Thompson and Victor Olofsson are all having decent seasons but it’s the Sabres’ defense that is sinking this team. Rasmus Dahlin is highly talented in every aspect—great skater, has the size and strength to go up against most anyone, great on-ice IQ, and he’s a solid shot and passer.

Beyond him, as a group, this was the weakest showing of an entire D group as the Canes have faced all season. Not helping was the poor forechecking by the Sabres forwards which could also be interpreted as the Canes’ forwards were constantly moving, making forechecking one difficult task. 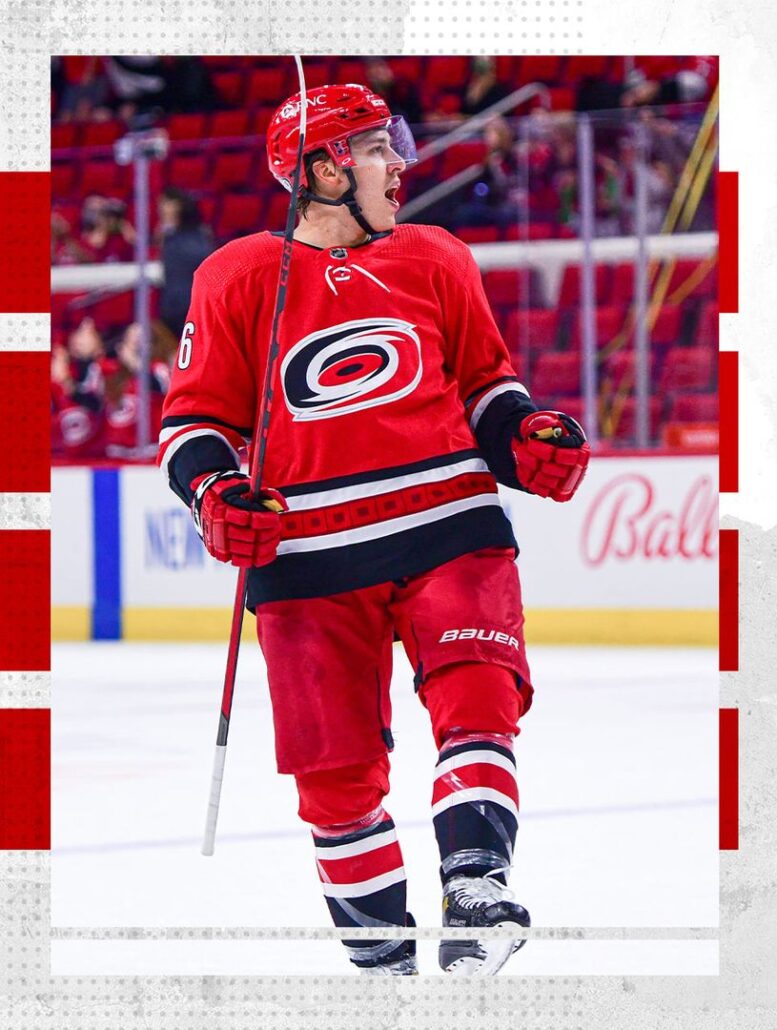 The Sabres have a fair amount of local fans and as usual, they came out in force. The only fault you could possibly lay on them is they haven’t converted to becoming a full-fledged Caniac as they made the right decision on where to live.

The Canes got the first score early, getting the sold-out crowd into the game. Brady Skjei stole a pass just as Buffalo crossed the Canes blue line touching the puck up to Teuvo Teravainen in the neutral. Turbo made a cross-ice pass to Sebastian Aho who was going in the right direction, wasting no time in moving the puck up to Nino Niederreiter right at the Sabres blue line.

Nino passed back to Fishy on the give and go, went to the middle taking a shot from the mid slot that the newest Sabre, goalie Malcolm Subban, blocked to the backboards. Fishy followed his shot, grabbed the puck below the goal line, made a no-look behind the back pass right onto Turbo’s tape for a quick one-time wrister into the upper corner for his 101st career goal.

Exactly 2 minutes later the Sabres thought they had tied it on goal by Olofsson but even before the replay confirmed it, the Caniacs knew he kicked the puck in to erase the equalizer. Whether it was having that goal called back, losing so many recent games, maybe some history or just because, but call up Jake Chatfield and Zemgus Girgensons we’re going at one another several times. Chats plays a hard game and very doubtful that Rod wants a call up to spend a lot of time in the box.

Midway in the period, Martin Necas used his speed and deception to pot the Canes second goal. Maxime Lajoie, the other D call up, made a nice play deep in his end to Vincent Trocheck in the neutral zone. Tro settled the puck then made a back hand pass to Seth Jarvis right in the middle of the Sabres blue line that Jarvis swatted in the air over to Nessy on the right wing.

Nessy turned on his jets getting a step on his defender, faked a shot from inside the circle then turned on the afterburners going around the net for a wraparound that took a replay to confirm even though everyone in the South end knew it went in. Late in the period, Buffalo got on the board on the third consecutive ‘own goal’ by the Canes when Henri Jokiharju tossed the puck to the goal and for the second consecutive game, the puck hit Ian Cole then deflected in. Cole was in the right position, had his man covered but those things happen.

Early in the second, Cole had everyone forget about the unfortunate circumstances of the first when he put a bomb in off a set play for his first goal as a Cane. With a faceoff to the right of the Sabres goal, Tro won a faceoff, pulling it back to Cole at the top of the high slot who released a howitzer that easily beat Subban.

Just 24 seconds in, Tro knocked in a goal of his own after Nino and Jokiharju battled for the puck taking each other down, Jacob Bryson misplayed the loose puck but sharp-eyed Tro didn’t, chipping it in from 20’ out for his 3 points of the night.

Nino got a goal of his own at the 11:42 mark after Fishy fed him a nice lead pass allowing Nino to put one 5 hole for a solid 5-1 lead. In a play that seemed to have a penalty far worse than the crime occurred at 17:47 when Thompson carried the puck along the far boards into the Canes end, Tro had him lined up for a legal check when Thompson must have seen Tro approaching, lowered his body while turning towards the boards just as Tro delivered the check.

Tro went for the puck then the body and was crouched down for a follow-through body check. All appeared legal but in the split second the refs called, and Toronto agreed, warranted a 5 minute major and a game misconduct. This means immediately leaving the game, a small fine and missing the next game.

Hopefully the NHL will review that again and admit the mistake and let Tro play the next game. The lead was cut in the last minute of the period again as Girgensons scored on the 5-minute powerplay with just 25.6 seconds left in the period. 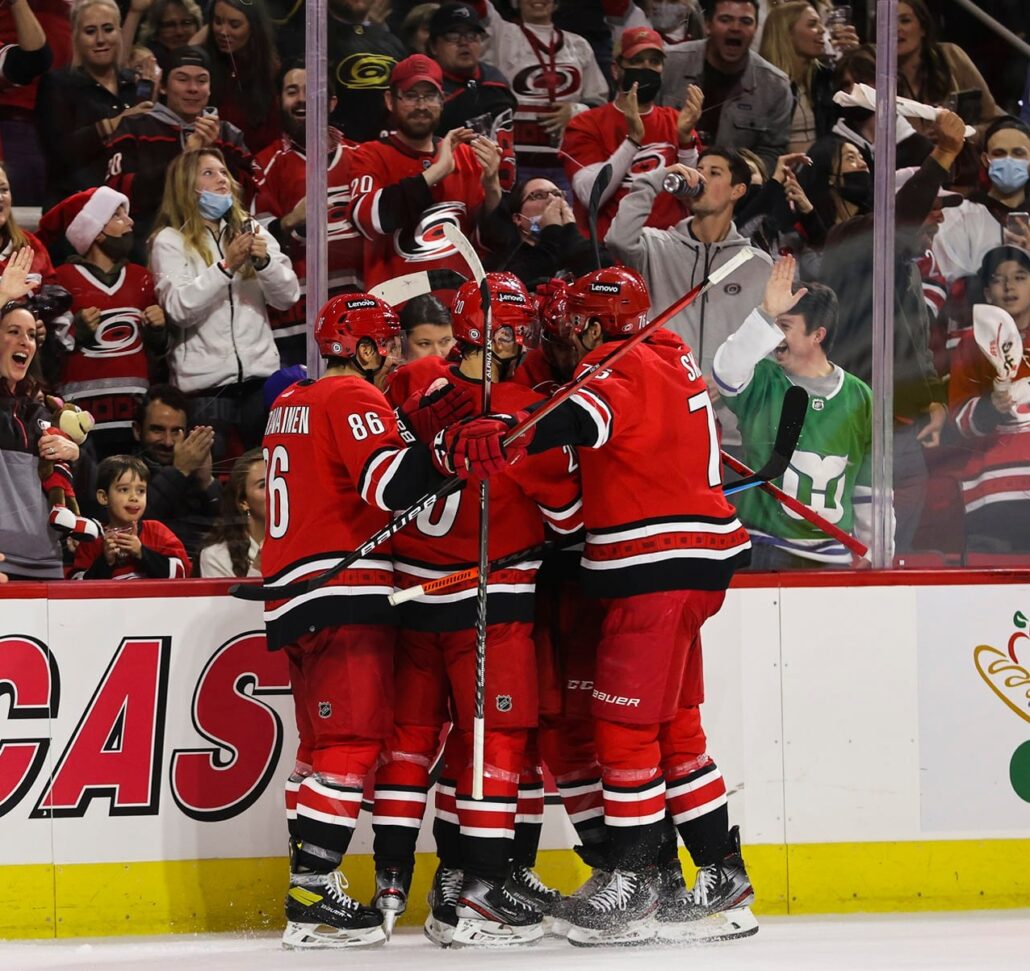 The joined-at-the-hip duo of Fishy and Turbo used their chemistry to give the Canes their first short-handed goal of the season.

After Dahlin mishandled the puck at the Canes blue line, Fishy had a semi breakaway going in on Subban all alone. Subban pad a pad save off Fishy’s forehand but Fishy, once again ( that’s all due to great coaching over his life) followed his shot, got the rebound and like the first goal, made an accurate backhand pass to Turbo coming down Broadway for the easy shot to close out the scoring for the 6-2 final. It was also like a bartender’s dream game as 4 Canes got their “5th” goals of the season.

A big surprise for me was before the game while on a call getting inside hockey insight from the renowned (but not football) Jim Kelly. Svech walked by and I said, “Hey you better get in your uniform.” He said “Yeah, but not today. I hate that.” Turns out he had some issue with his finger that needed attention but will be good to go for the upcoming 5 games on the western Canada road trip.

Also, Frederik Andersen didn’t play as planned as he was one of several Canes that weren’t feeling 100%. Not Covid as they’re tested twice every day but ‘tis the season for maladies. Brind’Amour said at the post-game press conference that considering all the ills and ails the team is having, he was very pleased with the effort along with the win. The win kept the Canes in third place with 33 points behind the Capitals with 36 points and Rangers with 35.