Cary, NC — The Canes are halfway through their season-long 6 game road trip and are a perfect 3-for-3.

Each game had its unique aspects and surprises but in the end, the Canes found a way to come out on top and get the valuable 2 points in each game. 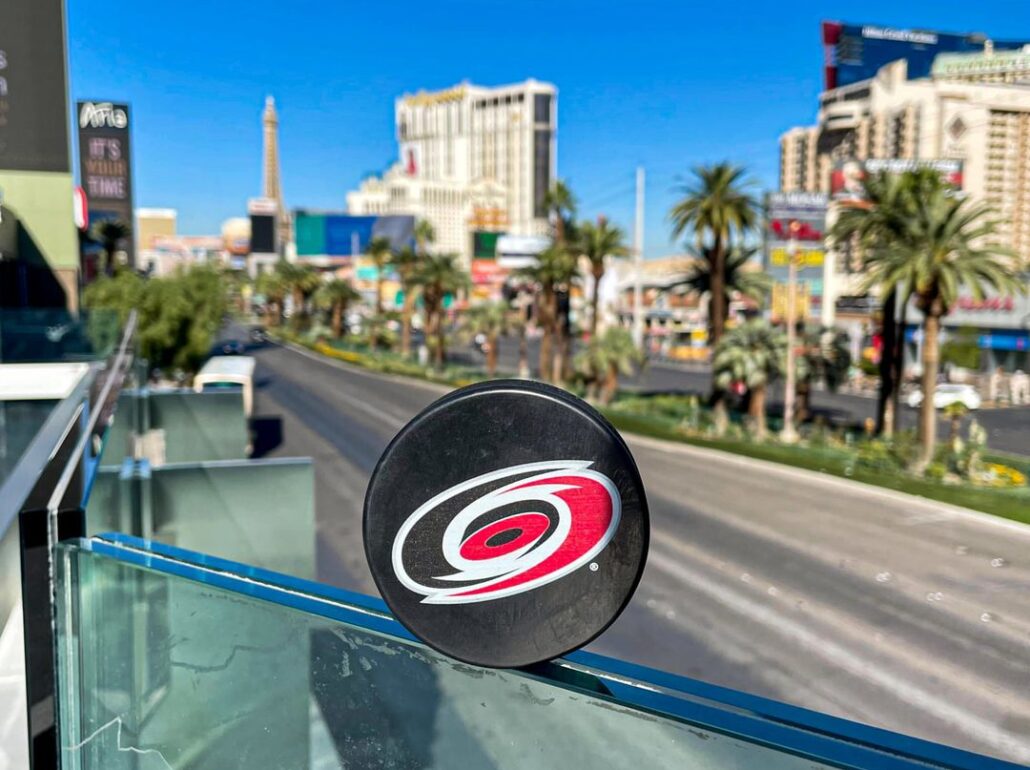 In Vegas, almost appropriately, deuces were wild with the Canes scoring 2 goals in both the first and third periods while the Golden Knights scored 2 in the second.

The first goal of the game was sheer beauty. Vincent Trocheck had the puck up high in the Knights end along the far boards, controlling the puck while the Canes were on a line change. Martin Necas hopped over the boards, immediately jumping into 4th gear with Tro making a soft drop pass that Nessy picked up in stride.

Necas looked up, saw Tony De Angelo cutting down the right side and hit Tony D with a perfect lead pass, catching it with soft hands then wristed a perfect shot into the near upper corner for his third of the season.

Late in the period, the Canes were on the power play on the only penalty of the period. The first PP unit was on the ice having a passing clinic with all 5 skaters almost passing at will.

Tony D, up at the top of the umbrella, passed to Andrei Svechnikov along the half boards, passing down to Tro. Sebastian Aho was on the crease but covered so Tro passed back to Svech, then up to Tony D. Instead of passing over to Teuvo Teravainen on the right point, Tony D passed back to Svech who saw 20’ of open ice to make a quick cross-ice pass to Turbo who blasted a hot slap shot that was more going for a rebound than a goal.

Vegas netminder, Robin Lehner made the low pad save with the rebound going right onto Aho’s stick who swiped it in for the Boberry biscuit powerplay goal. The Knights answered in the second with two goals to knot the game with both goals coming early in the period within a minute and 20 seconds.

With a few words, possibly a couple unrepeatable, from Coach Rod Brind’Amour, the Canes settled down and got back to Roddy hockey.

Very early in the third, Fishy had the puck in the far corner of the Vegas end , skated around the goal passing up to Ethan Bear who took a slap shot in stride that Lehner kicked out but rookie Seth Jarvis was in the right place at the right time in the mid slot and used his quick reflexes to swipe the puck in about 3’ in the air to put the Canes up by 1.

Midway in the period, the Canes had the puck in the Vegas zone when they were again in the middle of a line change. Nessy had the puck along the far boards, stalling a bit as Tro just hopped on the ice.

Turbo got time and space in the high slot when Nessy made the pass setting Turbo for a hard slap shot. Lehner made the quick pad save but Trocheck was camped out on the side of the goal who smacked it in on a tough angle for the final goal as the Canes defense was in a shutdown mode the rest of the game.

One bright spot was the Canes had just 1 penalty in the game, getting called for too many men on a bad line change with Antti Raanta looking strong for his first game back from the reported concussion.

The Canes had the hot Anaheim Ducks up next as they were on an 8 game win streak with Troy Terry having a career year in the first two months as he entered the game with a 15 game scoring streak.

The Canes struck early on a play very similar to one in the Vegas game. Nessy had the puck along the far side carrying it up from the corner to the high half boards, took a look seeing Bear cutting down the right side. Having the time, Nessy made a gutsy and hard pass right on the tape that Bear corralled, pulled the trigger, and buried his first as a Cane capping a pretty play.

Terry extended his scoring streak to 16 games, the third-longest in Ducks history. The Ducks cleared the puck from their end and had numbers coming down the ice as Bear pinched on the far boards but the Ducks were able to clear with just Jaccob Slavin back.

Slavo slowed the rush enough to allow Nino Niederreiter to get back. Ryan Getzlaf took a shot that Freddie Andersen kicked out, Nino forced Adam Henrique wide but he touched the puck every so little, dumping it into the dirty area that Terry pushed in to tie the game.

Both teams got off their games in the second as 5 penalties were called, 2 on the Ducks and 3 on the Canes. Midway in the third, the Aho line was doing what they do best and that’s attacking the net.

Fishy dropped a pass to Svech who dangled the puck then sent one to the net that big John Gibson kicked out. Jarvis was to the left of the net, put the puck on his stick, turned, and banked a shot off Gibson’s pad allowing the puck to trickle in for his second game-winner in consecutive games. 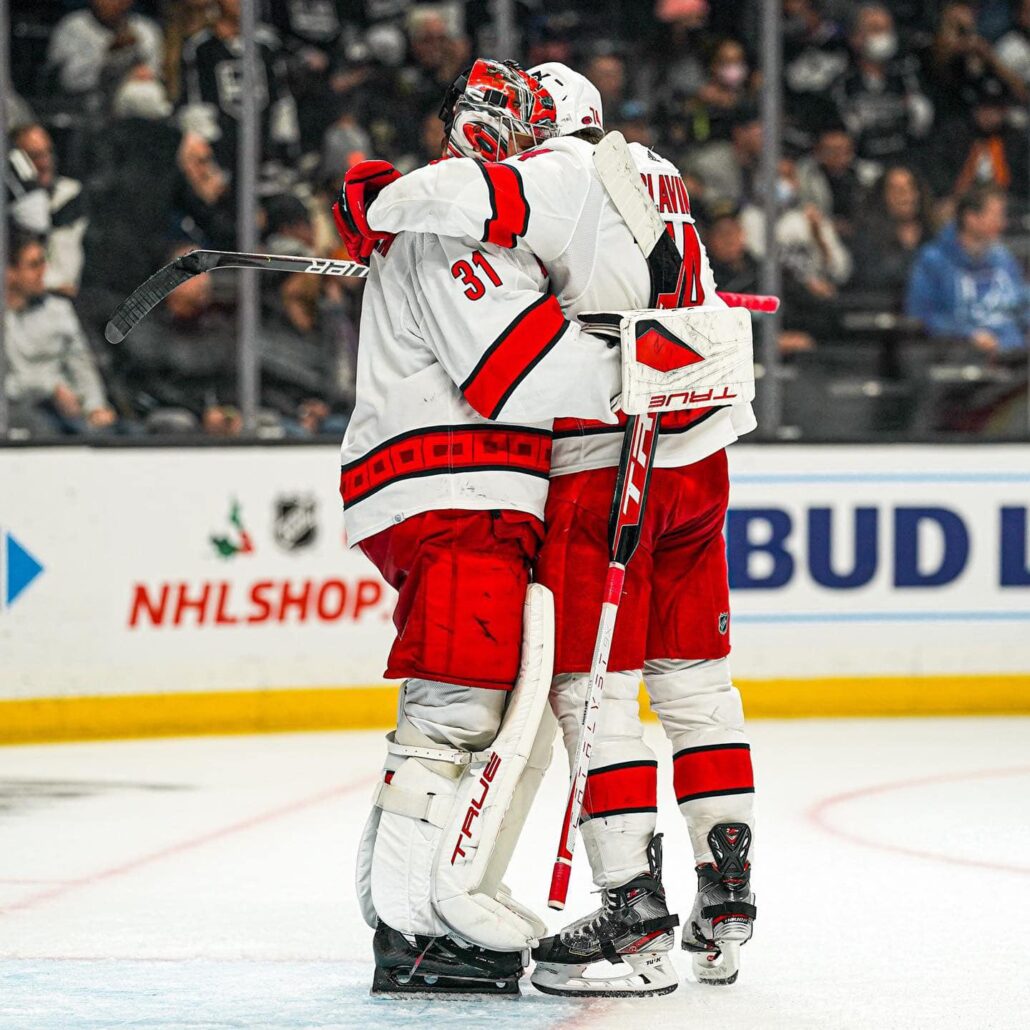 The third game was against the nearby Los Angeles Kings and was somehow expected to be a low-scoring game. Coaches sometimes say winning ugly is still winning and this game was that. It’s also hard to say your goalie was your best player when giving up 4 goals, but Freddie Andersen kept the Canes in the game.

The game was almost polite as anytime one team scored, the other team answered. Fortunately, the Canes scored first and last in the 5-4 win. Tony D made a good stop just north of the Canes blue line keeping the puck in the neutral zone.

Fishy made a slick touch pass to himself banking the puck off the boards around his defender then carried the puck along the far boards. Jarvis was speeding down the right side going straight to the net when Fishy sent a pass right on to his tape that Jarvis lifted to the upper far side to make it 1-0 with just 3 minutes gone in the game.

The Kings answered a minute and a half later when Blake Lizotte picked up a puck under Derek Stepan and Branden Lemieux muscling each other for possession, then sent a screened wrister past Andersen. Stepan answered with his own goal 70 seconds later on a deflection off a Jordan Martinook shot. What seemed like a long 8 minutes later, Adrian Kempe scored his first of the night off a pretty tip-in on a shot from the left point.

In the second period, Andersen cleared a dump by the Kings passing up to Svech in the neutral zone. Svech carried the puck into the Kings zone, dropping a soft pass to Fishy who took a couple of strides saw Jarvis get a step on his defender then sent the puck to the crease with the puck hitting the defender’s skate and going in to give the Canes the 3-2 lead.

With the Canes on the powerplay, Svech telegraphed a pass across the high slot that Kempe intercepted then raced to the Canes goal beating Andersen for the first short-handed goal against the Canes this season. Less that 2 minutes later the Canes were pressing deep in the Kings’ end where Jesperi Kotkaniemi snared a loose puck, extended his stick and lifted a sweet backhander top shelf to put the Canes again up by 1.

At the 18 minute mark, the Kings were attacking the Canes goal when Lemieux jumped on a loose puck slamming it in to knot the game once again. With about 30 seconds left in the second, Jordan Staal outmuscled his defender for the puck and got it to Nino. Nino made a touch pass to Nessy who turned on his jets, going down the left side. He made the right hand turn to the top of the crease, head faked a shot, kept going and then slid the puck into the open net to end the see-saw scoring at 5-4.

Both coaches had to remind their respective teams that defense is part of their games. While the scoring ended in the second period, if it wasn’t for some stellar saves by Andersen, this game could have had a different outcome than the 5-4 win.

Winning ugly counts and the Canes move upstate to San Jose for the next game Monday night. Let’s hope the mojo can continue.